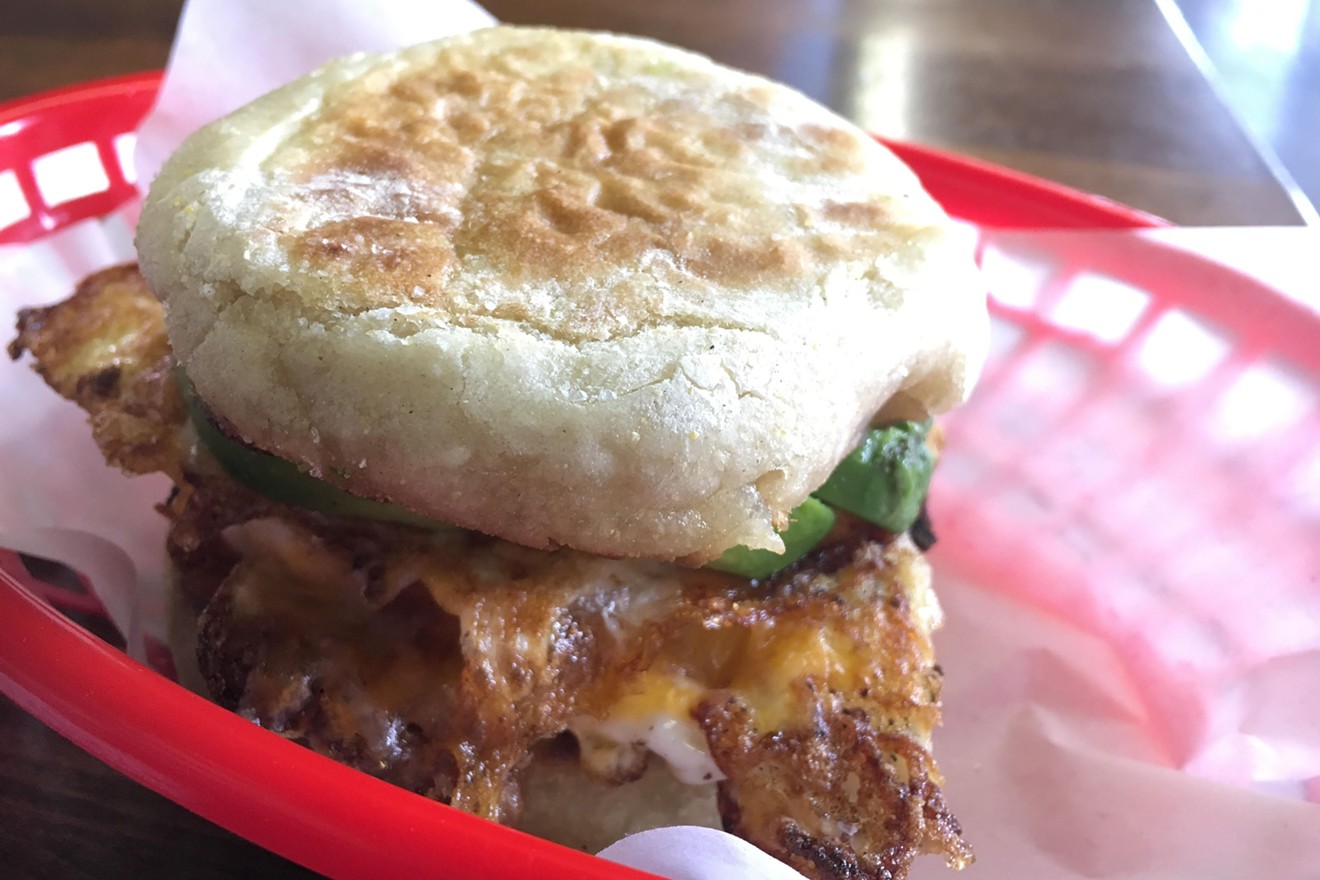 In the maze of streets south of Mile High Stadium and west of the South Platte River, two banners flutter above the sidewalk at the corner of Decatur Street and West Holden Place: One reads "Coffee" and the other counters with "Breakfast." Aside from a small sidewalk chalkboard announcing a coffee-and-burrito special, those banners are the only indication that you've found Sun Valley Kitchen & Community Center, a new breakfast-and-lunch spot that opened this fall.

The inconspicuous, flat-roofed commercial building a couple of blocks off Federal Boulevard might seem an unlikely location for a restaurant. But the cafe's founder, Glenn Harper, isn't interested in the kind of hip, flashy eatery that's been a harbinger of gentrification in other neighborhoods; he just wants to give neighbors an inexpensive place to eat, along with other community-focused programs to help bring food security to one of Denver's poorest areas, one dominated by public housing, factories and warehouses. Sun Valley kitchen employs neighborhood residents.
Mark Antonation
Sun Valley is a statistical anomaly in a city that's become a magnet for technology companies, affluent singles and entrepreneurs lured by the expendable income of its growing population. Harper points out that Sun Valley has only about two dozen single-family homes; most of the other residences are subsidized rental units managed by the Denver Housing Authority. This area, bounded by Federal Boulevard, West 20th Avenue, the Platte River and West Sixth Avenue, is also the only one of Denver's 78 official neighborhoods where more than 50 percent of the population is under the age of eighteen.

Because of this, Harper, who has lived in Sun Valley for years, wanted to create something kid-focused for the community. His primary business is a French-fry concession that sets up at festivals and other events. "We scrubbed a lot of potatoes here before we bought the building," he recalls. But in 2012, he did manage to buy it, and while he continued using the commercial kitchen to prep fries, he had visions of doing more. Breakfast often includes fresh-baked pastries.
Mark Antonation
In 2014, he opened up the space as a community center and began offering enrichment classes for kids interested in art, music, dance and cooking. The cooking classes really took off, in part because students (and their families) got to eat what they made during the sessions. "I noticed that kids didn't have access to food on the weekends," Harper recalls, so the center expanded its focus on food, which eventually grew to the point that sixty or so children were being fed dinner after cooking classes. From there, the center added a no-cost grocery program on Wednesdays and Saturdays with a food pantry stocked primarily by Denver Food Rescue and We Don't Waste, two nonprofit organizations that collect unused food from various sources (including Mile High Stadium) for redistribution. Other suppliers include Johnson & Wales University, Boar's Head, Seattle Fish Co. and Food Bank of the Rockies.

Cooking classes focus on the basics, since most of the students are first- through fifth-graders, but there's also an international element: Many newcomers to Sun Valley are immigrants from Vietnam, Syria, Jordan, Somalia and Ethiopia, among other countries. "Our intent is to follow along with the development of Sun Valley," Harper explains, "creating opportunities for people to work in the neighborhood as well as showcase their amazing talents."

Sun Valley Kitchen, which opened two months ago, was a natural outgrowth of the center's original mission to serve the community. Many lunch customers come from the new Colorado Department of Transportation offices just a couple of blocks away, but others are longtime residents, and the employees live nearby, too. In addition to breakfast burritos and sandwiches, the menu includes banh mi, falafel and other international daily specials made by workers who've come from other culinary cultures. The kitchen currently employs five people, including chef/general manager Ruben Valentin; it also does catering for local businesses. Every Thursday, the kitchen hosts a Local Chef Highlight, where professional cooks serve international cuisine from Vietnam, Cuba, Somalia and other countries. Just look for the signs advertising coffee and breakfast.
Mark Antonation
Lunch has been so busy that Harper has already had to install a second cash register, and lines often form as customers wait to place their orders. In addition to sandwiches, the midday lineup includes fish tacos, burgers, gyros, chicken wings and salads. At breakfast, which has not been as busy, the fare includes coffee and espresso drinks, fruit smoothies, breakfast burritos and sandwiches, as well as housemade pastries (thanks to an employee who brought her expertise from previous bakery jobs). And, of course, there are fresh-cut "breakfast fries" to take advantage of all that potato scrubbing.

Community Center director Daisy Wiberg says they soon hope to have approval to add SNAP-eligible items. In the meantime, she points out that everything on the menu is under $10, with the average breakfast or lunch check ringing in at about $6 or $7. Most of the ingredients come from traditional restaurant supply companies, but some of them are sourced from Food Maven, a company that specializes in providing reduced-cost food by tapping into surplus and "imperfect" items.

The center tracks its impact on Sun Valley's access to food. So far, nearly 1,000 students have enrolled in cooking classes (many have been continuous students for the past four years), Wiberg notes, and nearly 200,000 pounds of food have been distributed through the no-cost grocery program, some of which has gone to homeless individuals who find their way from campsites along the Platte River. The restaurant and community center is almost entirely self-funded, though some grant money goes toward maintaining the enrichment classes.

"We've been fortunate enough to be able to take our time and slowly build," Harper says, explaining that since Sun Valley has three major landowners — DHA, the Stadium Authority and Xcel Energy — much of the rampant development that has plagued other neighborhoods (to the detriment of low-income residents) has been kept in check here. "We're looking for transformation, not gentrification, through jobs, services and food. Hopefully we'll know in about ten years if it's working."

By then, Sun Valley could be transformed. Meow Wolf has committed to occupying a four-story, $50 million building (complete with exhibitions, a restaurant, a bar and retail) being constructed by the Colfax Avenue overpass; other parcels of land, such as one at the corner of West 20th Avenue and Federal, have been claimed for small apartment projects. But the interior of the neighborhood has yet to attract much attention, which makes Sun Valley Kitchen a peaceful spot for a hot cup of coffee and a breakfast sandwich just beyond the traffic jams, construction dust and clamor of the surrounding city.

Sun Valley Kitchen is located at 1260 Decatur Street and is open from 6:30 a.m. to 1:30 p.m. Monday through Friday. Call 303-862-8368 or visit feedingsunvalley.com for more information.
KEEP WESTWORD FREE... Since we started Westword, it has been defined as the free, independent voice of Denver, and we'd like to keep it that way. With local media under siege, it's more important than ever for us to rally support behind funding our local journalism. You can help by participating in our "I Support" program, allowing us to keep offering readers access to our incisive coverage of local news, food and culture with no paywalls.
Make a one-time donation today for as little as $1.