The Crowler Inventor Is Saving Small Breweries, One Can at a Time 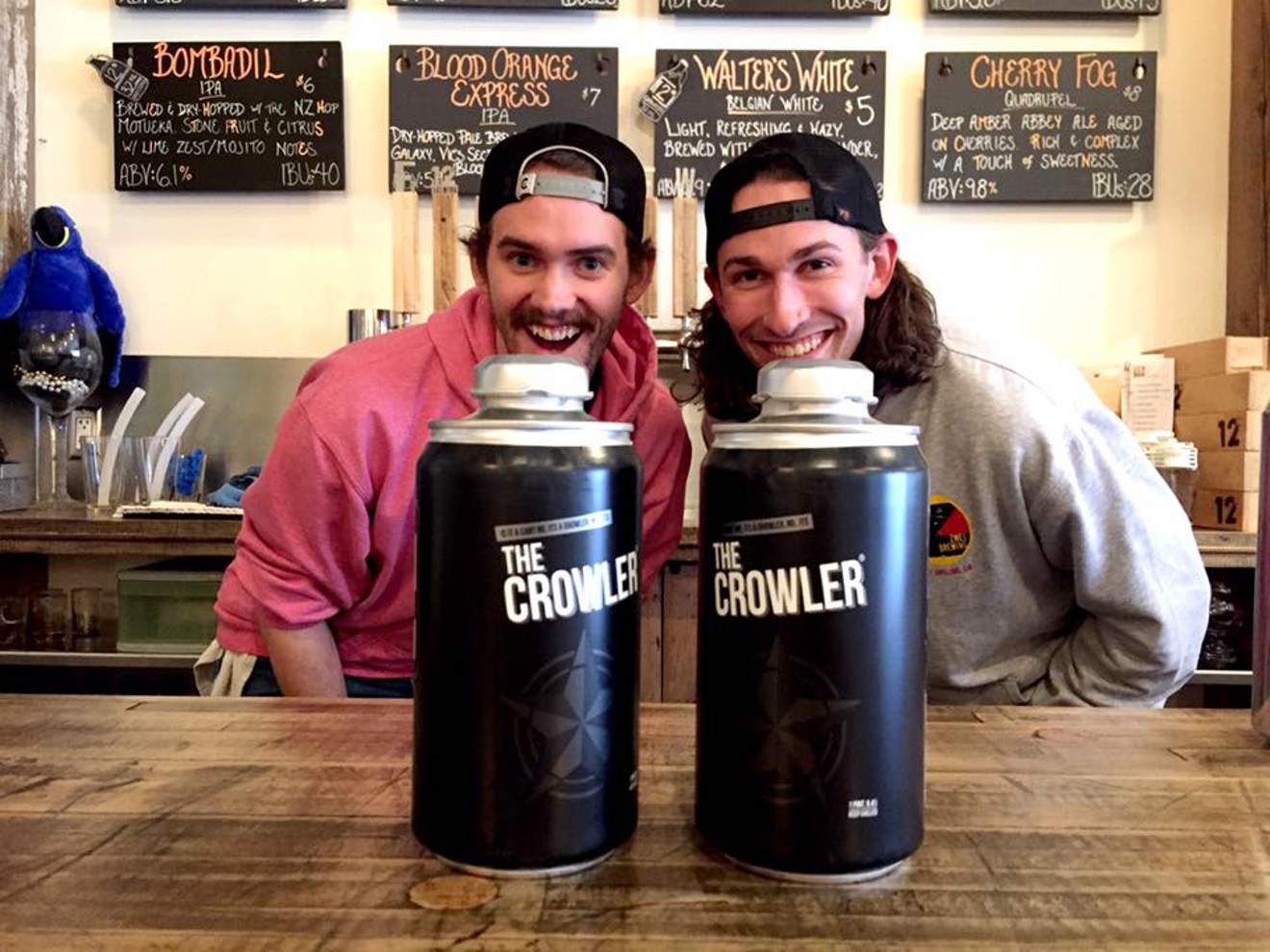 Louisville's 12 Degree Brewing switched to Twistee Cans after running out of Crowlers. 12 Degree Brewing
The guy who invented the Crowler would be feeling proud right now, but he's too busy taking orders for them.

Jeremy Rudolf will be working seven days a week for the foreseeable future, but that's okay. His job has never been as important as it is these days. Over the past week, as breweries faced the gut-punching effect of mass closures because of the coronavirus crisis, these large cans have been the only way for them to bring in revenue since breweries and taprooms are still allowed to sell beer to-go and, more recently, by delivery.

"We took 600 orders in four days. That's about two months' worth of orders normally," Rudolf points out. "We are getting a constant stream of phone calls and emails, a lot of times from the same people. But we are working through the weekend; we're not going to stop. Supplies are really low, but we'll get more next week, so we will be able to catch up really fast. For now, though, we are asking people to borrow from one another."

Rudolf runs Crowler Nation, a Longmont company that sells aluminum Crowler cans and Crowler machines, bar-top devices that seal the cans in seconds so that customers can take out any beer on tap. Over the past six years, the machines have become fixtures at just about every brewery in Colorado — not to mention thousand of others nationwide and in other countries — but they are particularly useful for smaller breweries that don't can or bottle their beer on a regular basis.

He's also offering another product to breweries — and now to restaurants, which gained the temporary right to sell draft beer to-go and for delivery on Friday after Governor Jared Polis relaxed some of Colorado's liquor laws. Twistee Cans don't require a Crowler machine, so businesses can simply fill them from the taps or from kegs, twist on the tops and send them out the door. They come in six different sizes. 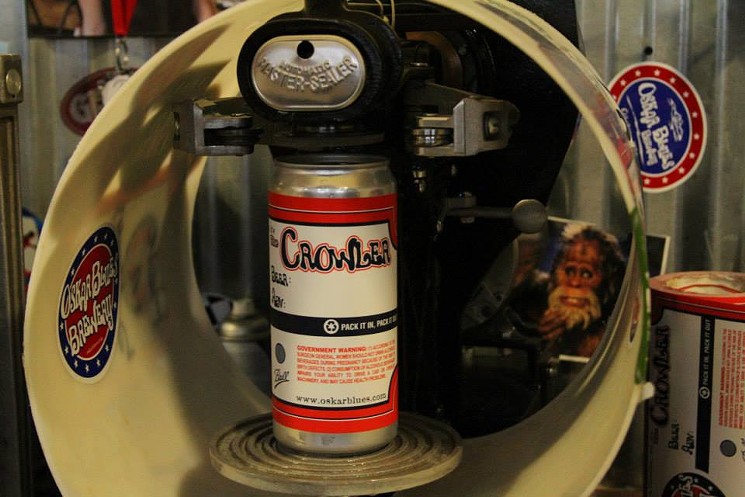 The original Crowler machine from 2014 at Oskar Blues.
Oskar Blues Brewery
And Crowlers have come a long way. In 2012, Rudolf was the packaging manager at Oskar Blues Brewery in Longmont when he came up with the notion of the Crowler. Not only would sealable cans give the company an alternative to the unwieldy and sometimes unsanitary glass jugs known as growlers, but they would fit with the Oskar Blues image of innovation; after all, the brewery was the first to can craft beer back in 2004.

The concept started small but picked up steam as Oskar Blues began requisitioning sealing machines from a company that specialized in making them for people who can fruits and vegetables at home. The brewery then sold them to other breweries along with pallets of special 32-ounce Crowler cans from Golden's Ball Packaging. The Crowler is, and continues to be, a Ball trademark.

Word got out quickly, though, and Oskar Blues began to get dozens of orders a month from all over the world. It also gained some competitors. By 2015, Rudolf was the full-time CANministrator of the Crowler business, and by 2018, with more than 3,000 machines under its belt, Oskar Blues separated the business from the brewery, creating Crowler Nation as its own company, although it's still owned by Oskar Blues and its parent company, Canarchy.

Before the pandemic, breweries relied on Crowler Nation's nine warehouses around the country for supplies of cans (which now come in multiple sizes, although the 32-ouncers are still the norm), machines, lids, labels and service, often on the same day they put in the order. Now, because of increased to-go sales, some breweries are are running out. But since Ball only manufactures the Crowler cans once every three months, Crowler Nation's supplies will also be low for another week to ten days. 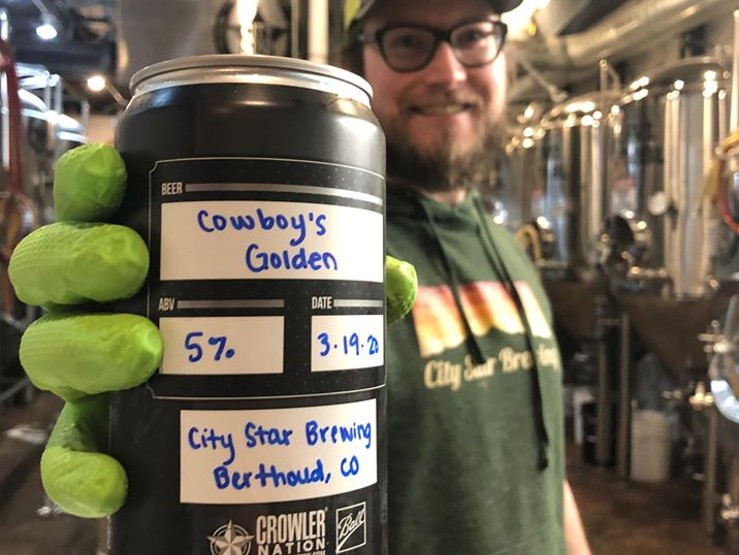 City Star Brewing immediately bought at Crowler machine after the shutdown took effect.
City Star Brewing
But Crowler Nation does have others sizes, as well as the Twistee Cans, which have come in handy for at least a few breweries, including 12 Degree Brewing in Louisville, which ran out of its 32-ounce Crowlers on Friday, and for Berthoud's City Star Brewing, which was one of the few beer makers that had, until last Monday, still been relying on glass growlers for to-go customers.

"Following the Colorado health order to close taprooms, we reached out to Jeremy Rudolf and immediately ordered a Crowler machine and Crowlers. Two days later Crowlers were filled and walking out the front door," says Whitney Way, who owns City Star with her husband, John.

Spending money on new equipment at a time when the future is so uncertain was a frightening thing to do, but also "very necessary," she adds. "The shutdown meant completely reinventing our business model with to-go beer as our primary sales driver. We needed to step-up our to-go beer game — and fast." City Star is using smaller-sized Crowlers, but will probably switch to 32-ounce cans once the coronavirus crisis is over.

For Rudolf, it has been gratifying to see the Crowler grow from an experiment with Ball into something that he's been able to bring to so many breweries. But at the moment, it's also "bittersweet," he says. "I pride myself on being someone who helps and I couldn't be happier that the cans are helping." But the cans are also in short supply this week, right when these breweries need them the most.
KEEP WESTWORD FREE... Since we started Westword, it has been defined as the free, independent voice of Denver, and we'd like to keep it that way. With local media under siege, it's more important than ever for us to rally support behind funding our local journalism. You can help by participating in our "I Support" program, allowing us to keep offering readers access to our incisive coverage of local news, food and culture with no paywalls.
Make a one-time donation today for as little as $1.