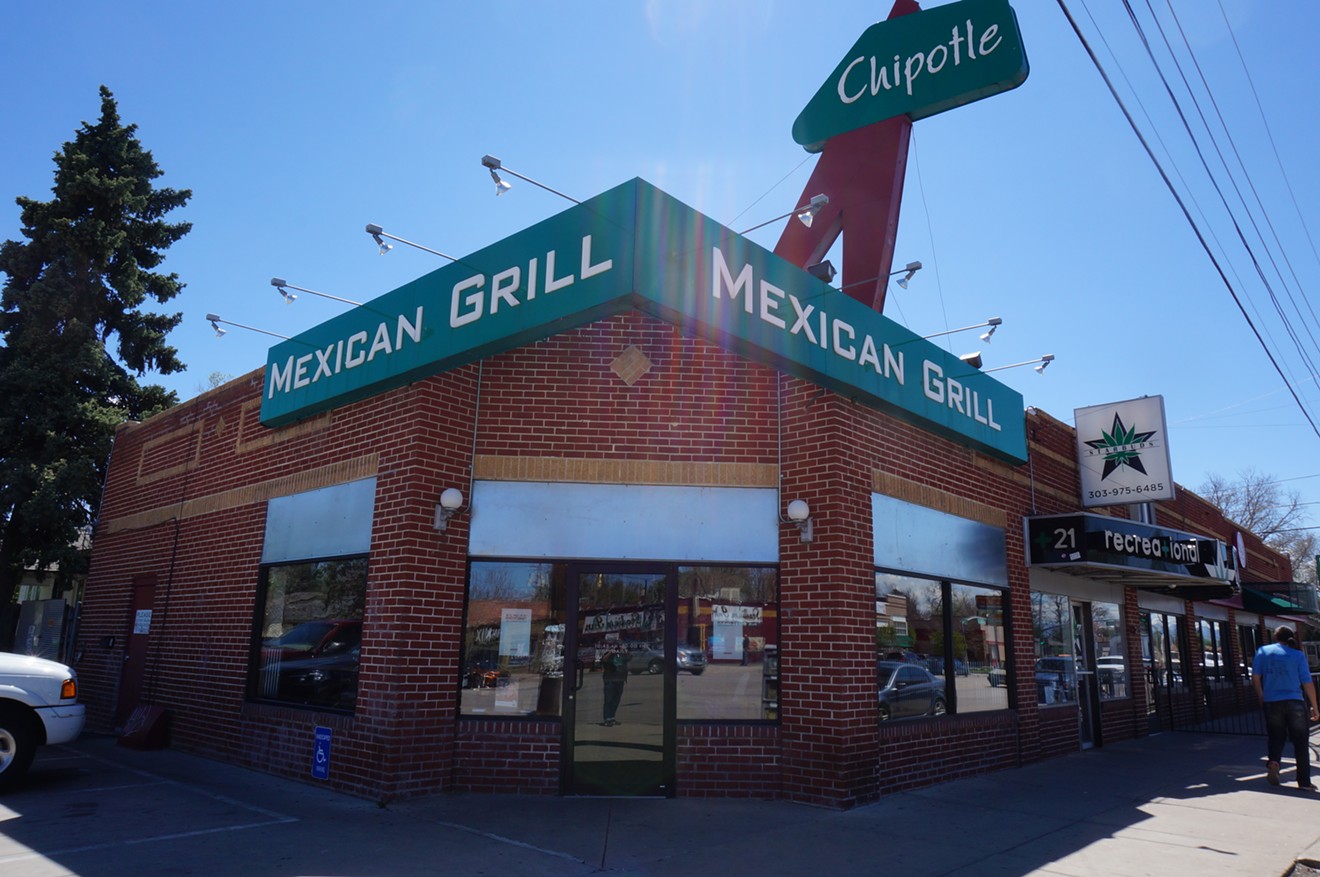 The first Chipotle, which opened in 1993. Mark Antonation
The story of Chipotle began in 1993, when a young chef named Steve Ells opened a tiny burrito joint at 1644 East Evans Avenue, in a former Dolly Madison ice cream shop. Back then, Ells did everything from grill meats to assemble burritos to balance the books; the shop closed on holidays because those were the only days off he ever got.

Today Chipotle has more than 2,000 locations around the world, but that original outpost remains a popular stop for University of Denver students, residents of the surrounding neighborhoods and tourists seeking a fat bite of fast-casual history. But history is about to change: the very first Chipotle will close its doors on Thursday, May 18.

But don't worry, the store will reopen in late summer or early fall, in time for a new semester of classes at DU, with an updated look and a new kitchen. The order counter will be updated to match Chipotle's other stores.
Mark Antonation
Chipotle communications director Chris Arnold says the changes to the dining room won't be significant, but the order counter will be modernized to match that at every other location; not only is this the company's smallest location, but it's currently the only one without the point-and-order setup where you follow your burrito down the line as it's made.

But the Mayan-style artwork and custom-built chairs from Loveland artist Bruce Gueswel — whose furniture still graces every Chipotle location — will remain, as will the framed black-and-white photos of the Dolly Madison shop that once sold ice cream here instead of carnitas, grilled chicken and barbacoa. (Chipotle trivia: Every location holds black-and-white photos of architectural elements in that store.) Beneath the store where it all began.
Mark Antonation
The main work, Arnold points out, will be carried out behind — and beneath — the scenes. The low-ceilinged basement space that currently houses storage and a makeshift office will be dug out so that employees will actually be able to stand upright without bumping their heads. Prep tables and a walk-in cooler will be moved into the below-ground space, and proper stairs will be added in place of the current ladder-like setup. On the main floor, the kitchen and service line will also be modernized for efficiency, giving prep cooks a little extra elbow room.

Back when Ells opened the East Evans shop, he wrote his name and the year on a beam in the basement. Since then, employees have covered nearly every square inch of the walls, ceiling and pipes with their signatures. Arnold says the company plans to save the piece of wood with the founder's signature on it, and will work with Gueswel to have it incorporated into a new piece of art. Chipotle founder Steve Ells signed his name on a basement beam in 1993, the year the company launched.
Mark Antonation
If you've never been to this Colorado landmark, make the pilgrimage to the first Chipotle before Thursday to see where it all began. Order the barbacoa burrito (there were no bowls or tacos in the early days) the way it appeared on the menu back in 1993: as a house special with cilantro-lime rice, pinto beans, cheese and tomatillo green-chile salsa.

And that's a wrap. Nearly every surface is covered in employee signatures.
Mark Antonation
KEEP WESTWORD FREE... Since we started Westword, it has been defined as the free, independent voice of Denver, and we'd like to keep it that way. With local media under siege, it's more important than ever for us to rally support behind funding our local journalism. You can help by participating in our "I Support" program, allowing us to keep offering readers access to our incisive coverage of local news, food and culture with no paywalls.
Make a one-time donation today for as little as $1.