One Last Bite: This Salida Diner Serves the Best Chicken-Fried Steak, But It's Closing Soon The Patio Pancake Place is a favorite for locals. Molly Martin
One of the perks of living in Denver is the abundance of road-trip destinations for an easy weekend escape. Some people hop in the car to head to their favorite camping site, while others search for the perfect hike. But year after year, I make my way to Salida, dreaming of a certain breakfast place — one that may not be around for much longer.

Over the past decade, there have been lots of changes in this mountain town, which sits on the Arkansas River and is surrounded by fourteeners. Its downtown creative district, established in 2012, has bolstered the vibrancy of the area and drawn in new businesses, including breweries, bars, distilleries and restaurants.

But there's one spot that's been comfortingly consistent for decades: the Patio Pancake Place (or, more commonly, just Patio Pancake). While there is no actual patio at the 58-year-old Salida staple, there are indeed plenty of pancakes — along with the best chicken-fried steak I've found in the state.

Located along Highway 50, away from the creative district on a strip still dotted with ’60s-style roadside motels that probably opened around the same time Patio Pancake debuted as a drive-in in 1964, the area is a retro throwback (save for the Best Western across the street and the McDonald's a block away).

If you're looking for a place to stay, the Circle R Motel, with its vintage sign and oversized pink lawn flamingos out front, is a great choice for a few reasons: It's affordable, there's a hot tub, the rooms were remodeled in 2018, and, most important, it's only a six-minute walk to Patio Pancake, where you can fuel up for whatever adventure awaits that day, whether it's whitewater rafting, catching a concert or festival in town, or hitting up the hot springs pool for a relaxing soak. 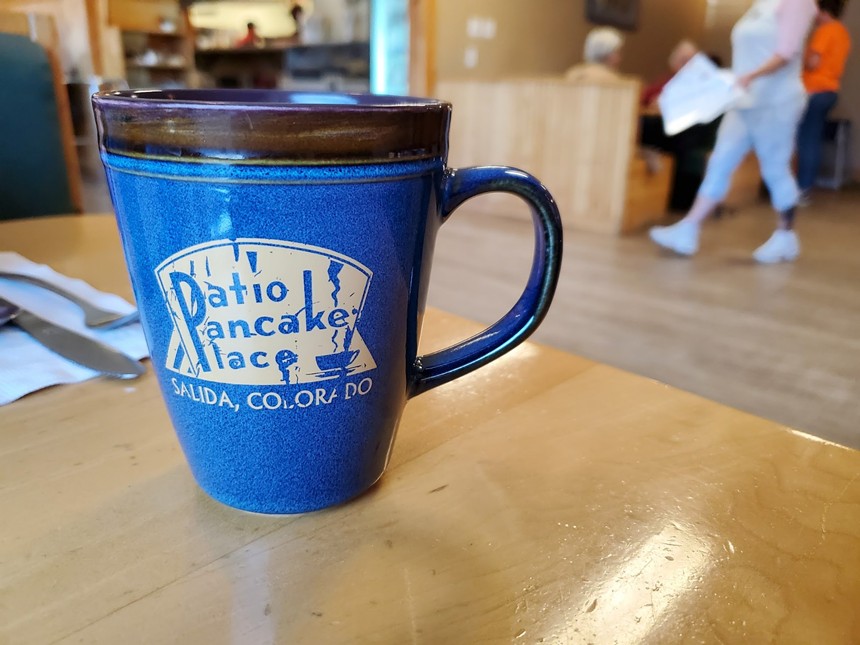 Molly Martin
The restaurant was purchased by the Edwards family in 1976. Now it's run by their children and grandchildren, making it the oldest continuously owned and operated restaurant in Chaffee County. But that run will soon come to an end: The family put the restaurant on the market earlier this year. Now a sale is pending and the future of Patio Pancake, which will close at the end of August, is uncertain. There are rumors around town about what the new owners may do with the property, but nothing has been confirmed yet.

For the time being, the parking lot still fills with cars daily — mostly locals who come for the low-priced comfort food. While the tables have been spaced out a bit since the pandemic hit, nothing else has changed inside the relatively bare-bones, wood-paneled dining area since my first visit, sometime around 2006.

Any good diner meal requires at least one pancake for the table, and that's definitely not to be skipped at a place with "pancake" in the name. The buttermilk-based recipe hasn't changed since 1964, and it's available in several options, including tiny silver-dollar cakes ($7) and a cheesecake spin on the classic ($8.50 for one). You can also opt for your choice of flavored fillings, including chocolate, strawberry, coconut, banana and pecans, but I prefer to go for one plain cake ($6) with ample whipped butter from those tiny, foil-topped containers and a generous pour of syrup.

Other local favorites include the green chile, a recipe developed by the founders' son, Tim Edwards, and the housemade German and Italian sausage. Found alongside such breakfast staples as omelets, huevos rancheros and biscuits and gravy (all of which are served during regular hours, from 7 a.m. to 2 p.m.) are lunch selections that include sandwiches, chicken strips and an open-faced burger. 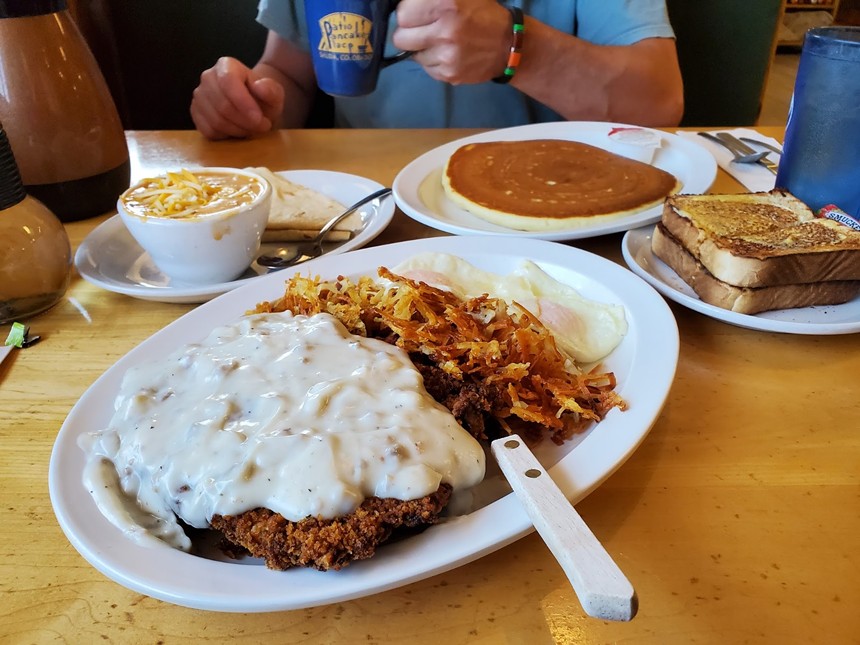 This is chicken-fried steak perfection.
Molly Martin
Although many of those classic comfort foods can be tempting, I never pass up the chance to order the chicken-fried steak. At $16 (or $17.50 with hash browns), it's by far the most expensive item on the menu, but it's worth every penny.

First of all, it's huge, covering more than half the large, oval plate on which it's served. The cubed steak is thick and meaty enough to not get lost in the also thick, craggy breading that somehow stays crispy even under a generous blanket of rich, creamy country gravy dotted with pepper. Two eggs, any way you'd like them, and toast or a pancake come alongside. And yes, you should pay the extra $1.50 for the golden hash browns, made here with shredded potatoes.

Patio Pancake, like many diners, caters to a largely older clientele — which means it tends to go light on the salt. I can't fault the place for that, and there's no shame in adding a sprinkle of seasoning to really make the food here pop. I go for a few dashes of Cholula, too.

I'll be returning soon for what may be my last taste of that chicken-fried steak. Like now-closed Denver staples Tom's Diner, Annie's Cafe and the Breakfast King, this throwback could become just a memory in the coming months — and yet another reminder to visit the restaurants you love while you can, and visit them often.
KEEP WESTWORD FREE... Since we started Westword, it has been defined as the free, independent voice of Denver, and we'd like to keep it that way. With local media under siege, it's more important than ever for us to rally support behind funding our local journalism. You can help by participating in our "I Support" program, allowing us to keep offering readers access to our incisive coverage of local news, food and culture with no paywalls.
Make a one-time donation today for as little as $1.