The Saucy Noodle Will Close August 14 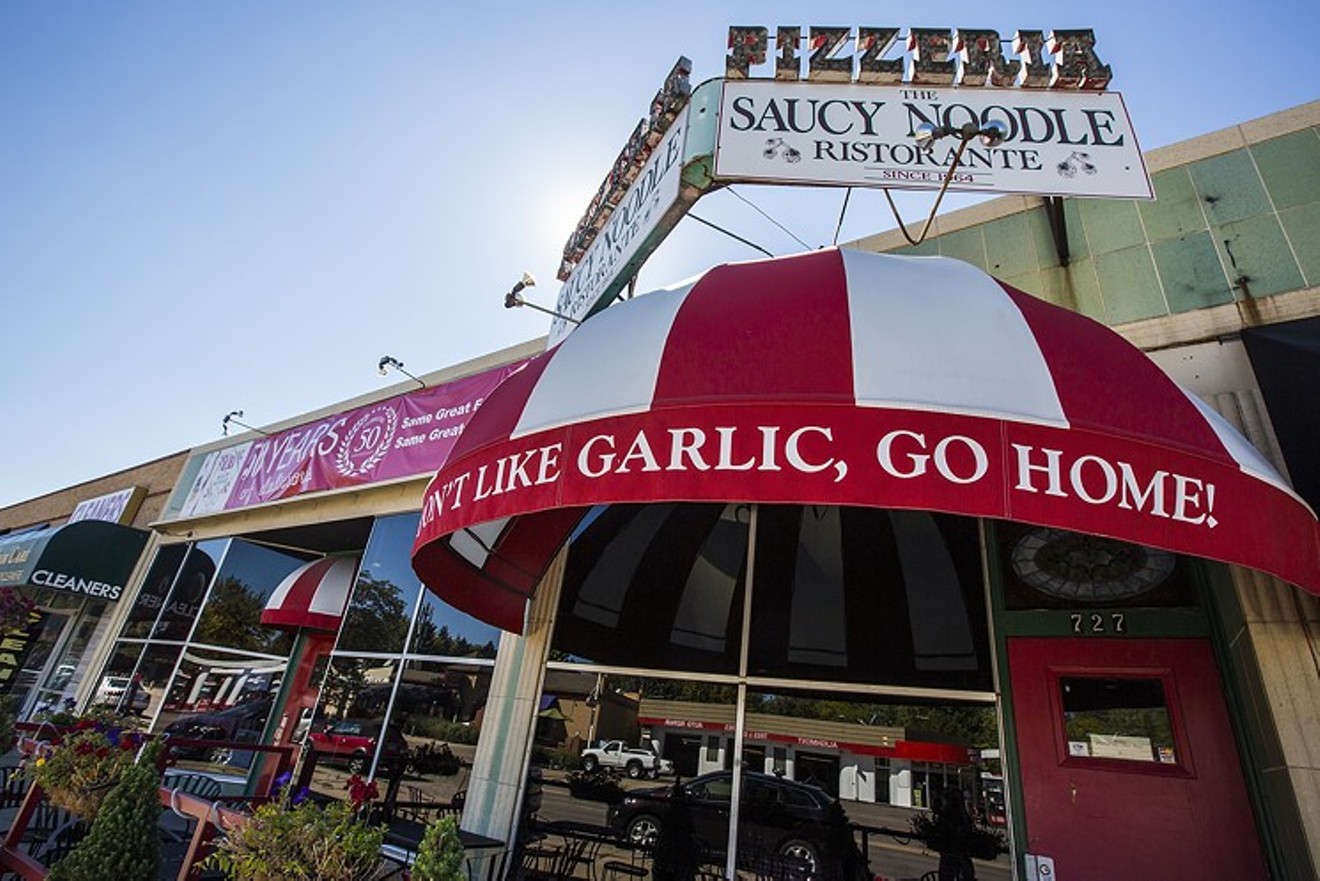 The Saucy Noodle will close on August 14. Danielle Lirette
"My heart breaks at the thought of disappointing so many loyal customers," says Erin Markham, whose grandfather, Sam Badis, opened the Saucy Noodle at 727 South University Boulevard in 1964, coining the motto that's on the restaurant's awning today: "If you don't like garlic, go home."

But soon that awning, along with decades of history and memorable meals, will be gone.

The upcoming closure wasn't completely unexpected. Erin, who grew up in the restaurant and now runs the business with her husband, Nathan, knew it was coming at some point — but they expected to be able to close on their own terms and timeline.

In February 2020, just weeks before the pandemic led to the shutdown of indoor dining, the Markhams found a surprising notice on the front door of the Saucy Noodle: a Certificate of Demolition Eligibility Application. The certificate had been requested by the Robert L. Naiman Co., which was under contract to purchase the building. At the time, the restaurant's lease was set to expire on December 31, and Erin told Westword that "our plan was to try and relocate — something hopefully we could purchase." 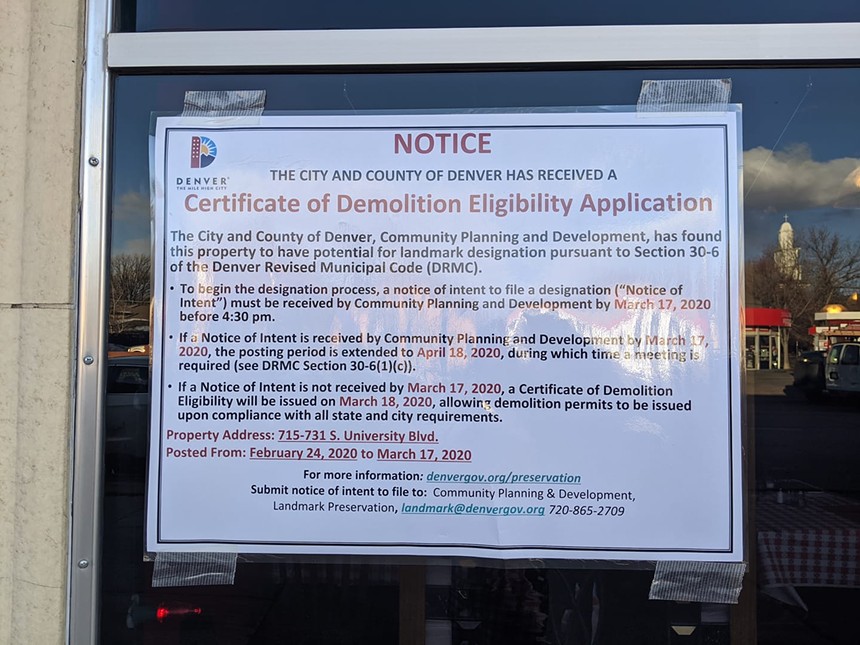 After December 2020, the Saucy Noodle moved to a month-to-month lease. "Every day I prayed we could make it another day," Erin recalls of the last nineteenth months. In the meantime, the Markhams continued the hunt for a new location, but didn't find any viable options. "We've looked endlessly," Erin notes. "We just can't afford what landlords think they should be getting right now."

Then, on July 15, the Saucy Noodle's building was purchased for $2.2 million by property developer Otto Petty, co-founder of Endurance Real Estate Partners. At first, everyone was "trying to play nice," Nathan says. Petty suggested that the Saucy Noodle could stay, but the plan was to split its current space into three separate businesses. Petty also asked for a seven-year commitment, for more money per month than the Markhams are currently paying for the entire space — a deal that doesn't make financial sense after "the worst three years in the industry," Nathan notes.

And so the Markhams began to discuss their exit strategy. "[Otto] told us not to worry, that it would take at least six months to get permitting for the remodeling he wants to do, and to take our time getting everything out," Nathan says. "Then he turned on us like a snake." 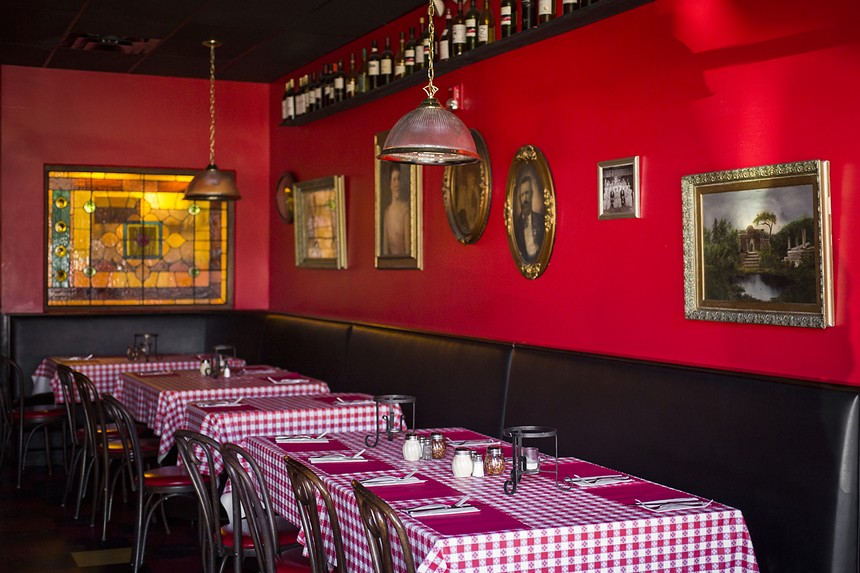 The Saucy Noodle has been serving Italian food since 1964.
Danielle Lirette
On July 25, he called the Markhams with bad news. "[Nathan] got off the phone and told me we'd been kicked out," Erin recalls.

According to the lease, the thirty-day notice begins on the first of the month, which means the restaurant will have to remove anything it wants to save by August 30. In order to have enough time to clear out the space, the Saucy Noodle's last day of service will be August 14.

"This is going to be a hellacious three weeks, but it's a relief," Erin admits, adding that she was struggling with making the decision to "pull the plug" herself because of the fear of disappointing "the loyal people that have shown so much love to us over the years."

According to Nathan, the new landlord does not yet have permits for renovations, and the building is in rough shape. "It is a dirty site," he notes. "That's why it's been sitting here so long, because it's polluted."

During the Naiman Group's due diligence, Nathan says, the property failed two environmental inspections because "there's fifty years of dry cleaning fluid under the building, which was reported to the EPA."

The loss of the Saucy Noodle isn't the only blow to the neighborhood. In June it lost the Bonnie Brae Tavern, which was owned by the same family for nearly nine decades — and that property is set to become a three-story apartment complex.

"It's not the district it was ten years ago, and I put most of that on the city," Nathan says. While the demographics have changed over the years, he sees the city's prioritization of Cherry Creek as a main driver for the Bonnie Brae neighborhood's decline in business. "We're on a major thoroughfare that's become an extended on-ramp to Cherry Creek," he explains. The congestion on University Avenue makes Bonnie Brae a dangerous place to walk, cutting down on foot traffic. Combined with the lack of parking, that's resulted in local businesses taking a big hit in recent years. "If you don't like garlic, go home," reads the awning at the Saucy Noodle — but not for much longer.
Molly Martin
The Markhams' main concern now is breaking the news to staffers, all of whom they need on board to make it through the final weeks. In order to get by, they plan to trim the menu down to the basics so that they can accommodate as many guests as possible before the last day of service.

Then, after moving whatever they can save of the Saucy Noodle's contents into storage and taking a much-deserved vacation, the Markhams will continue to look at options for a possible new location for the restaurant — which may even mean moving out of the state. "We're not going to rush into this," Nathan says of any big decisions about a new spot. "We're going to wait for a good offer."

If and when they find a space, the Markhams know that the process of opening a new restaurant can take months, particularly in the City of Denver, where permitting is backed up. "After all of this, I don't feel supported by the city," Nathan adds.

Regardless, Erin is hanging on to hope. In 2000, after a four-alarm fire destroyed everything but the pizza oven at the Saucy Noodle, she vowed that the restaurant would rebuild. And it did.

Now she shares a similar promise: "We're not giving up. We will rise from this like we have before."
KEEP WESTWORD FREE... Since we started Westword, it has been defined as the free, independent voice of Denver, and we'd like to keep it that way. With local media under siege, it's more important than ever for us to rally support behind funding our local journalism. You can help by participating in our "I Support" program, allowing us to keep offering readers access to our incisive coverage of local news, food and culture with no paywalls.
Make a one-time donation today for as little as $1.