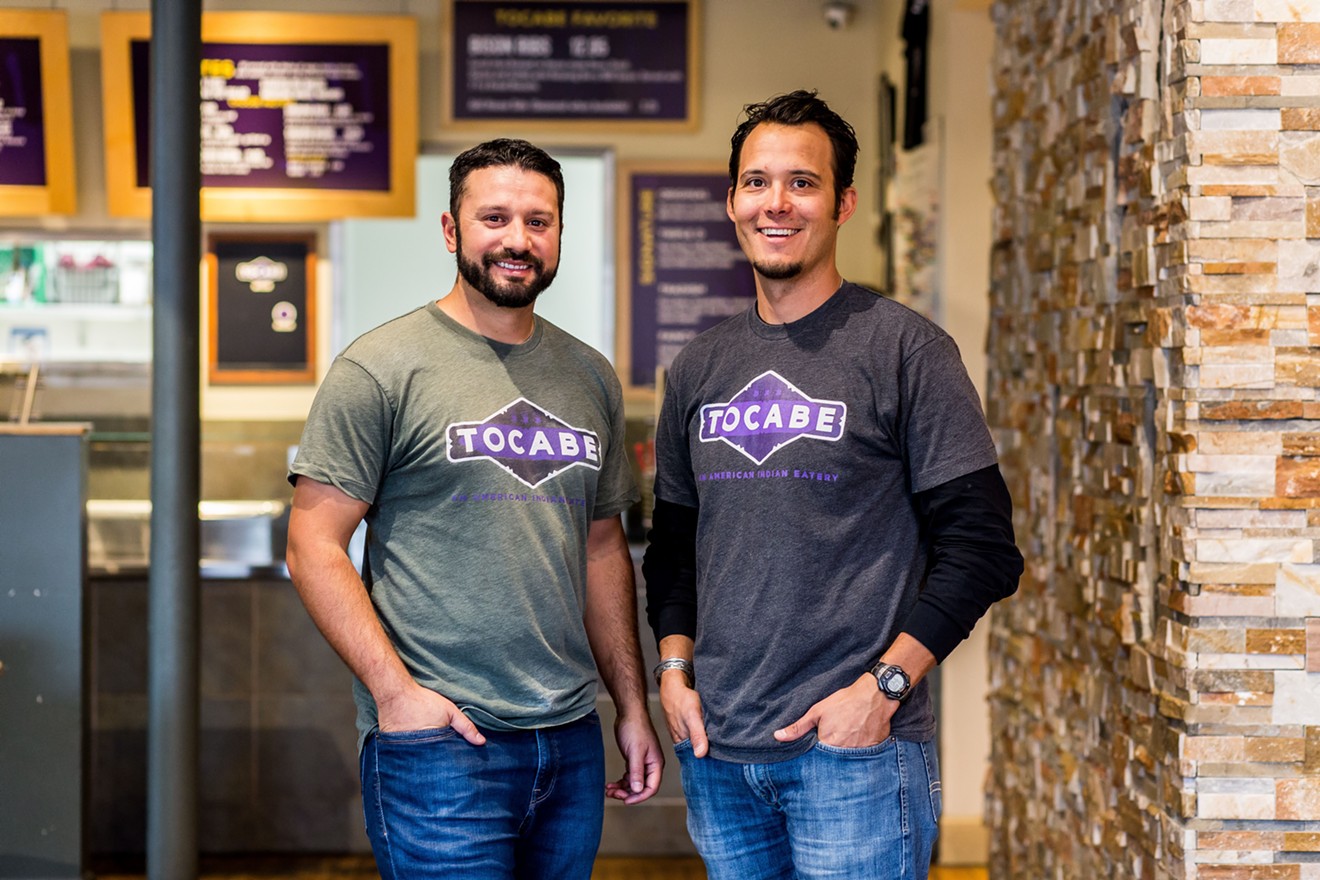 Tocabe founders Ben Jacobs and Matt Chandra. Rachel Greiman
When Tocabe, a favorite for its Native American menu that includes fry bread tacos and shredded bison, temporarily closed its two locations — in the Berkeley neighborhood (3536 West 44th Avenue) and Greenwood Village (8181 East Arapahoe Road) — during the pandemic, owners Ben Jacobs and Matt Chandra worried not only about their employees, but also the farmers and other producers who provide the raw ingredients for their menus.

Now, with the recent launch of Tocabe Indigenous Marketplace, the same Native American foods they use at their restaurants are available to anyone in the country. All it takes is the click of a button at shoptocabe.com to get goods like heirloom white tepary beans from the Sonoran Desert, Canadian lake-harvested wild rice and Navajo roasted blue corn mush, to name a few of the forty-plus foods available. And for every two items sold, the company will donate one to a Native community organization. Local residents can also pick up orders directly from the Berkeley location.

"This was something Matt and I had always wanted to do pre-COVID, but we felt it was a long-term goal as the restaurants grew and we built on the supply chain," says Jacobs. "Obviously, that wasn’t happening when COVID hit, so we asked ourselves, 'How do we survive and continue to support Native supply and community?'" 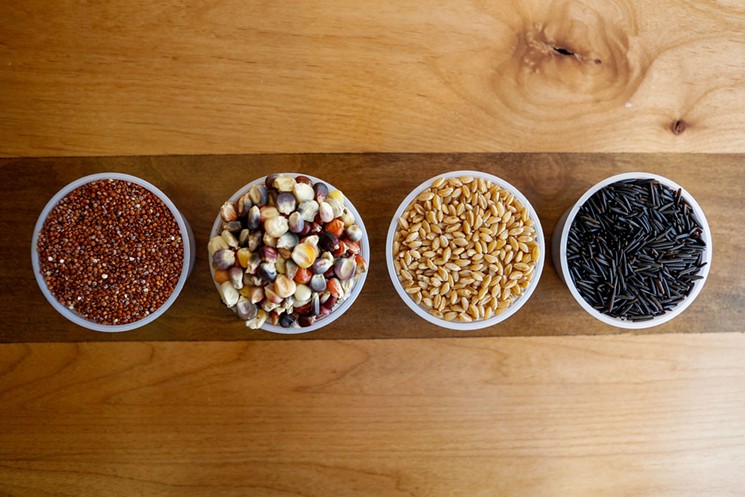 Find indigenous grains for sale at the new online Tocabe marketplace.
Adam Larkey
The answer was to move forward with their dream for an all-access market featuring whole foods grown, harvested, made and cared for by Indigenous nations and tribes across North America. But, notes Jacobs, who is a member of the Osage Nation, it wasn't enough to expand the business in order to support these producers and introduce more people to Native foods; they wished to give back to Native populations at the same time.

"We wanted to find something that was sustainable beyond COVID while supporting food production and getting it back into people's hands," he says. "That's why we developed this market and built in the donation program."

The beneficiary changes monthly, but goods are donated to centers that support Native American organizations, including the most recent recipient, the Denver Indian Center. Unlike other companies that push customers to buy a certain amount in order to activate a donation, Tocabe builds donations based on the totals from collective sales. Donated items will change monthly too, says Jacobs, which means that one month it might be Ute Mountain yellow cornmeal and the next Red Lake Nation wild rice. The idea is to help Native populations build their own pantries and have the opportunity to connect to foods from their own heritage.

"Right now, donations go to local Native American organizations," says Jacobs. "But as we grow, the goal is to ship food to different communities all over."
click to enlarge Grass-fed bison is one one of the main meats served at Tocabe and sold through the marketplace.
Rachel Greiman
Another type of donation offers a taste of Indigenous food for anyone. The Essential Pantry Box is a $110 starter kit of twelve items that help build a personal pantry with goods like Séka Hills extra-virgin olive oil, Ute Mountain blue cornmeal, pinole (a grain mixture) and Tocabe's special spice blends. Customers who purchase a full set can also send a six-item box to a recipient of their choice — or they can opt to pay it forward and have it donated to one of the restaurant's partners.

As the marketplace grows, the team plans to have the dry goods for sale at both restaurant locations, but don't expect the inventory to include every indigenous ingredient used at Tocabe, Jacobs says. Some producers like to keep their products a local secret, and that's okay with him.
click to enlarge Inside Tocabe, a fast-casual spot in Berkeley.
Adam Larkey

"There's so much reclamation in ingredients and seeds right now that some people want to keep it close to their community," says Jacobs, who doesn't push to buy items people don't want to share, and never negotiates the price. "What we want to do is support business, and we're putting the money into our community and keeping those dollars in the community."

All of the goods are housed in Colorado, and most of the food sold at the market is the same as what's served at Tocabe. The only discrepancy is in the grass-fed bison offerings. While the restaurant uses larger cuts for its braised shredded bison, the marketplace sells steaks and ground meat. All of it is sourced from Fred DuBray, a member of the Cheyenne River Lakota Tribe of North Central South Dakota.

Thanks to Jacobs and Chandra, the Tocabe Indigenous Marketplace provides an easy, ethical way to bring home the taste of Native American foods.

Visit shoptocabe.com to order; good can be shipped nationally and are available for pick-up at the Berkeley location of Tocabe, 3536 West 44th Avenue, Wednesdays and Fridays from 3 to 5 p.m.
KEEP WESTWORD FREE... Since we started Westword, it has been defined as the free, independent voice of Denver, and we'd like to keep it that way. With local media under siege, it's more important than ever for us to rally support behind funding our local journalism. You can help by participating in our "I Support" program, allowing us to keep offering readers access to our incisive coverage of local news, food and culture with no paywalls.
Make a one-time donation today for as little as $1.