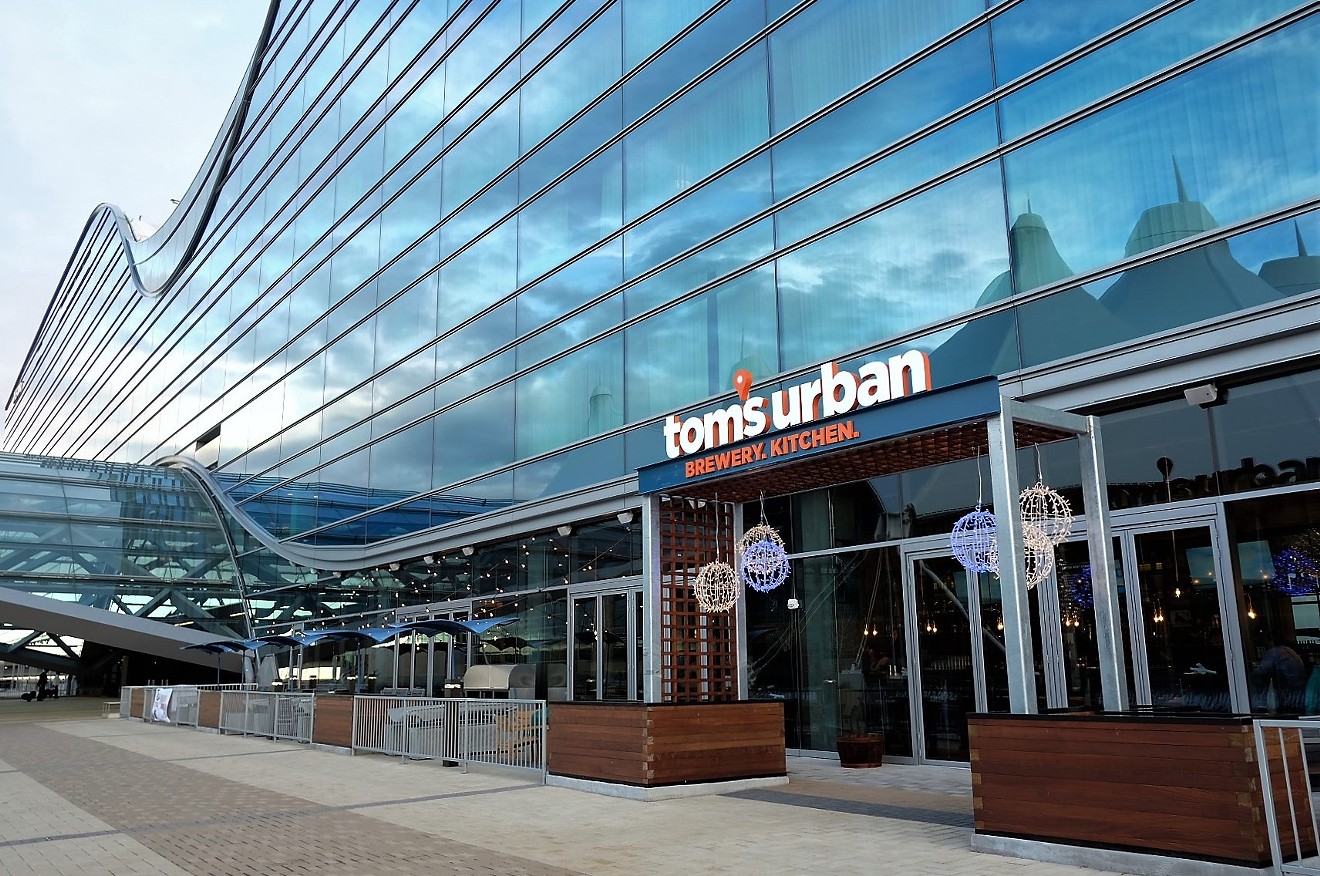 Welcome to Denver International Airport. May we pour you a beer? Sarah Cowell
After two years of waiting, a lot of construction and a lawsuit, Denver International Airport finally has a brewery to call its own. Tom's Urban Kitchen and Brewery opens for business today in the Westin Hotel, just across the plaza from the main terminal, where travelers and hotel guests will be able to enjoy beers brewed right on site.

Decorated with an upscale-diner-meets sports-bar theme, Tom's will serve burgers, wings, tacos, pizza and the like, as well as a variety of craft and domestic beers. At least six will be made by Tivoli, which has its primary location in the Tivoli Student Union building on the Auraria campus. 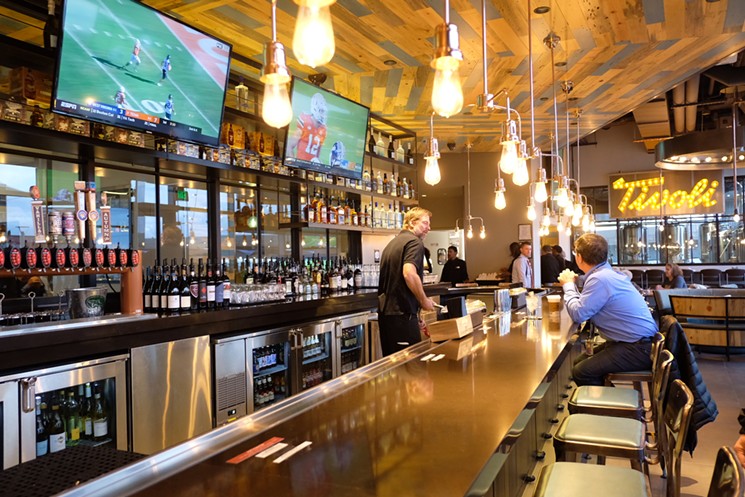 Sarah Cowell
Brewing at Denver International Airport is scheduled to begin today, when Tivoli makes its first beer, Jet IPA, which will only be available at Tom's for now; later, it may be offered at other locations in the airport. After Jet IPA takes off, Tivoli brewers and students from Metro State University's growing Beer Industry Program will design several other airport-based recipes, says Ken Hehir, who took over as Tivoli's CEO in March. The students already work with Tivoli's primary location.

"They'll be innovating here, designing beers on this pilot system," Hehir says. Tivoli purchased a 3.5-barrel brewing system for the airport from Bennett Forgeworks, a brewing-equipment maker in Delta.

The brewery is only the second operating brewhouse located on airport property in the country. The other one is an outlet of Florida's Cigar City Brewing, located inside Tampa International Airport. DIA is a fitting place for a brewery, and this one reflects the airport's increasing awareness of the benefits of showing off the state's craft breweries. Sarah Cowell
But its inception hasn't come without controversy.

In March 2016, Denver City Council approved a ten-year, $18.5 million contract that would allow Midfield to build the brewery, two Smashburger locations (Tom's and Smashburger were then owned by the same company), and a coffee shop at the airport. At the time, it was the largest contract in DIA's history.

But several city councilmembers, as well of a few of the other breweries and local businesses that bid on — and lost — the airport award, raised serious questions about the bidding process and qualifications of the winning group.

Sarah Cowell
"We don't think [the winning bidders] met the minimum requirements for the RFP,” Ed Cerkovnik, a principal with the company that owns Wynkoop Brewing, said at the time. Wynkoop had teamed up with the Cherry Cricket (which it also owns), Park Burger and Peet's Coffee & Tea on a bid. Brian Dunn, founder of Great Divide Brewing, also thought the award was surprising based on the bid requirements. Great Divide had teamed up with Host Marriott, Highland Tap & Burger, Ophelia's, Bad Daddy's and Starbucks on its bid.

Tivoli had not been brewing as long as called for in the RFP, critics charged, and Tom's Urban was having some problems with its own concept. (In May, the original Tom's Urban in Larimer Square closed altogether.)

In February 2018, the Wynkoop/Cherry Cricket bidding group filed suit, claiming that then-DIA chief revenue officer Bhavesh Patel "manipulated the bidding process for a 10-year concession contract to ensure that Michigan-based Midfield Concession Enterprises Inc. won despite being less qualified than local competitors," according to the Denver Post. "In return for rigging the bidding process — including by allegedly ordering the destruction of scorecards that showed Midfield was the least-qualified bidder — the lawsuit claims Midfield was expected to bring two companies affiliated with Patel in as beneficial owners in its airport operation."

The case was dismissed in July, but the Colorado Sun reported in August that a federal criminal investigation was under way that concerned the same issues.
KEEP WESTWORD FREE... Since we started Westword, it has been defined as the free, independent voice of Denver, and we'd like to keep it that way. With local media under siege, it's more important than ever for us to rally support behind funding our local journalism. You can help by participating in our "I Support" program, allowing us to keep offering readers access to our incisive coverage of local news, food and culture with no paywalls.
Make a one-time donation today for as little as $1.