Aurora's Trap Tea Blends Cultures and Stirs Up the Internet Customers wait in line at Trap Tea. Claire Duncombe
“You remember Toys R Us?” asks Maurice Anderson, creative director of the recently opened Trap Tea at 2790 South Havana Street in Aurora. “You remember how excited you were?”

Trap Tea, which specializes in boba drinks, wants to bring back the nostalgic, childlike feeling of getting a toy off the shelf for customers. In order to evoke a fun, flashy experience, its design is a mix of cultural influences created by Anderson and the shop's owners.

The name refers to trap music and culture, which originated with Black people in the South. But the owners of Trap Tea are Indonesian, so the brand has caused an Internet outcry, prompted by questions about the difference between appreciation and appropriation. Many commenters on social media are asking if Asian-Americans should be able to make a profit from a business that uses a Black cultural term.

For the past two years, Anderson, who is Black, has worked with the Trap Tea team to create a shop that’s an amalgamation of cultures. The goal was to create “something super-cool and super-fun,” Anderson explains. “In L.A., you see these crazy boba shops and crazy teas, and we decided we wanted to bring that aesthetic to Colorado...[to make it] appealing to all kinds of people.” 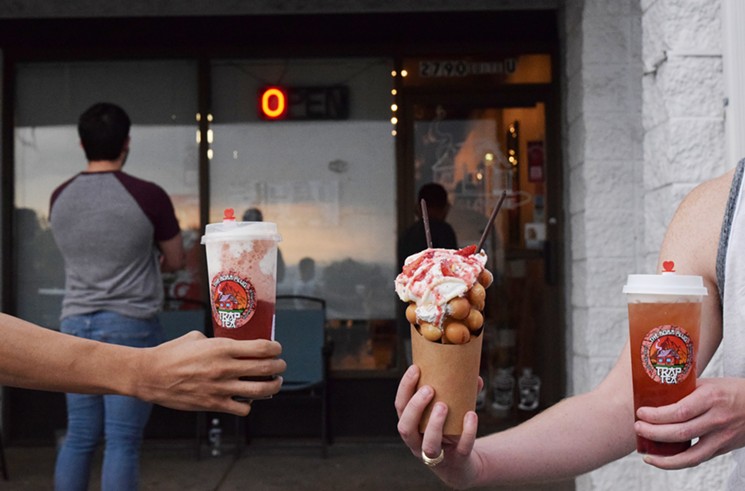 Customers leave with their egg waffles and boba teas.
Claire Duncombe
Along with boba teas (which originated in Taiwan in the 1980s) and puffy Hong Kong-style egg waffles, Anderson says the focus is on “building an experience.” That’s why the tea is sold in [email protected]-inspired cups: plastic to-go containers in the shape of teddy bears. When filled with boba tea, the brightly colored merchandise resembles a child’s sought-after prize.

Other [email protected] products are sold as conversation pieces and collector's items by a Japanese company, and range from keychain- to toddler-sized. Trap Tea displays several on the counter as part of the imaginative atmosphere that also includes board games, a TV playing cartoons and a Dragon Ball Z-inspired logo.

On August 21, Denver resident Alewia Tola Roba went into the shop under the impression that Trap Tea, with its reference to Black culture, was Black-owned. When she found out it wasn’t, she posted a video denouncing the appropriation of the term by an Asian-run business and accused the owners of stealing Black culture. The video went viral, and includes an exchange between Roba and another Black customer in which she calls him a racial epithet.

Not only did this prompt an ongoing debate about appropriation, but the video reached Shanae Jones, owner of Ivy’s Tea Co., an online shop that uses #traptea in its marketing. In her own Instagram post, Jones, who is Black, expressed deep anger and resentment that the Trap Tea in Aurora used that term, explaining that using the word "trap" pays “homage to the rappers and the people that [she] love[s] who made it out of” trap culture and allows her to also “celebrate and love the people who are still there.” 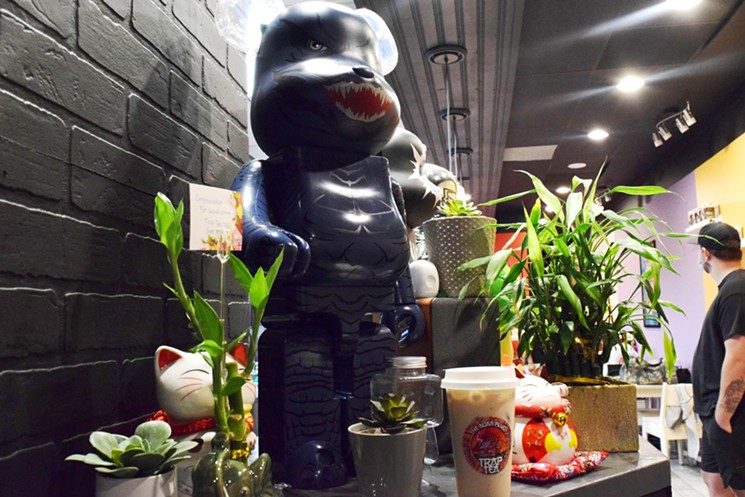 [email protected] figurines and other merchandise fill the counters at Trap Tea.
Claire Duncombe
The problem Jones sees, and one that others brought up in the Instagram feed, is that trap culture grew out of a great socioeconomic disparity directly caused by the systemic racism that continues to disproportionately affect Black Americans today. In their view, anyone of a different race making a profit off that cultural term adds insult to injury.

It’s true that the Internet popularity has allowed Trap Tea to reach vast audiences around the world. As of August 27, the company had 5,727 Instagram followers. Anderson says the shop is being asked to send merchandise, such as its plastic bear to-go containers, to Montreal, Los Angeles, Seattle, London and Japan. And there are customers showing up in person, as well: On August 22, the socially distanced line stretched down the sidewalk while people waited over thirty minutes to get drinks.

Anderson says that the controversy over the name “has been wild. You hear the word 'trap': It’s from Georgia, it’s from the South,” and he says that he grew up in Louisiana listening to trap music: “Gucci Mane, T.I., all of that.”

In 2020, he says, trap “basically means where you sell your products out of. ... It’s grinding and hustling and doing what you gotta do.”

Anderson says that he loves being creative director of a Colorado teahouse run by Indonesians, serving Taiwanese beverages, displaying Japanese art and referencing Southern Black culture. He sees himself “putting the spin on it, all these different cultures working together.”

Still, the name is complicated because of the history and the many different perspectives on its use in the Black community. Despite Trap Tea’s desire to create a shop that’s simply cool and fun, there’s a deeper conversation to be had now — a conversation beyond the name-calling and trolling currently playing out on social media.
KEEP WESTWORD FREE... Since we started Westword, it has been defined as the free, independent voice of Denver, and we'd like to keep it that way. With local media under siege, it's more important than ever for us to rally support behind funding our local journalism. You can help by participating in our "I Support" program, allowing us to keep offering readers access to our incisive coverage of local news, food and culture with no paywalls.
Make a one-time donation today for as little as $1.
Claire Duncombe is a Denver-based freelance writer who covers the environment, agriculture, food, music, the arts and other subjects.
Contact: Claire Duncombe