Eric Larkin (left) and Caleb Michalke on brew day at Cohesion. Cohesion Brewing
If you’d walked on the brewing floor at either the Cohesion or Seedstock craft breweries recently, the aromas wafting from the kettles would have taken you back in time. And to a different place — Vienna, Austria, in the early 1900s — where barley breeders at the city’s agricultural university were experimenting with varieties from the highly regarded Moravian Hana region of what is now the Czech Republic.

One of those cross-bred varieties would find success with breweries making pilsners and other lagers in Eastern Europe in the years between World War I and World War II. But by the late 1940s, other barley varieties had shown better results in the field, and this particular one was relegated to a barley seed bank, where different strains and grains are kept when they fall out of use.

Until now. The strain was rescued from obscurity a few years ago by Indiana’s Sugar Creek Malt Co., which was able to grow enough of the barley, now called Edelweiss, this year to malt it and sell to just a handful of lucky craft breweries across the country, including two in Denver. On November 13, Seedstock Brewery cooked up a version of a Czech-style pilsner using the malt, and Cohesion Brewing did the same on November 14.

When the pair of pilsners are tapped in late December, it will be the first time in two generations that anyone has tasted the subtle flavors that come from this particular 100-year-old grain.


“Just knowing that this varietal was grown in Europe early in the twentieth century but isn't grown there currently connects us to a different era of brewing in a really unique way,” says Eric Larkin, who opened Cohesion at 3851 Steele Street in August. "Most of the Old World malts have been passed over for those that...better line up with modern brewing."

The Edelweiss barley is being used for two beers in Denver.
Sugar Creek Malt Co.
Larkin, who primarily uses Colorado-grown barley that is malted just for him to his specifications, heard about Edelweiss on social media, where he follows Sugar Creek Malt Co.’s Caleb Michalke, a third-generation farmer who decided to partially transition his family’s acreage to barley in 2015.

Michalke hadn’t planned to follow his family into the business when he was in college, but a semester abroad in Austria got him interested in beer, which in turn got him interested in home brewing. After toying with the idea of opening a brewery, Michalke followed his roots back into the agricultural side of beer. Not with hops, which he thinks are a little boring, but with barley, which he finds fascinating, in part because of the different ways it can be malted.

In 2016, he and his wife traveled to Austria and stopped at a barley seed bank that is trying to reintroduce historical varieties back into the market. Michalke wanted to grow an heirloom variety, and he asked about acquiring strains of “winter barley,” which is planted in October rather than in the spring, when most varieties of barley are sown. (Indiana’s hot, humid climate is more conducive to winter barley, Michalke says.) The seed bank sent him two tiny packets, one with 200 grams of an English winter barley strain and the other with 200 grams of Edelweiss.

The second one grew well, especially as Michalke’s parents harvested the first small row by hand and then hand-threshed it as well. Now, after four years of careful tending, Michalke has been able to turn those 200 grams into 10,000 pounds of barley, which he harvested in the early summer and then malted. 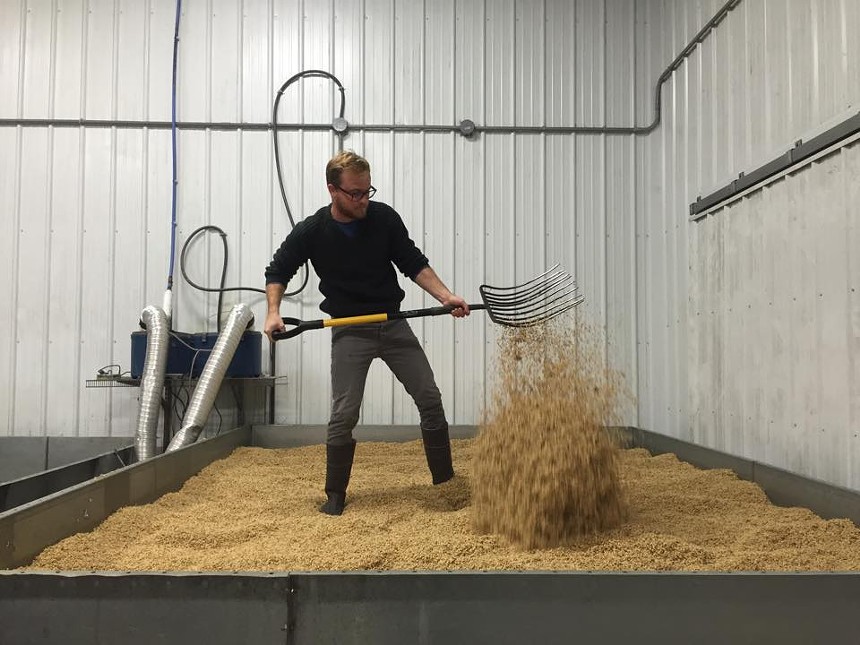 Caleb Michalke on the farm in Indiana.
Sugar Creek Malt Co.
“We didn’t really know much about this grain when we first started growing it,” says Michalke, who is Czech on his mother’s side. After researching more of its history, he realized that it coincidentally had been cross-bred at the same agricultural university in Vienna — many decades earlier — where he’d spent his semester abroad. “It seems to have been meant to be.”

Michalke is now traveling the country for two weeks so that he can be on hand when each of the first half a dozen or so craft breweries make a beer with Edelwiess. “It will be an experimental year. I'm excited to see how people like the flavor of it,” he says. “Lagers have become more popular with craft brewers, and this one hits all the buttons in terms of making an old-world lager-style malt." If everything goes well, Sugar Creek should have 50,000-75,000 pounds of Edelweiss next year so that more breweries can try it.
But not every brewery will have success with the malt, explains Cohesion’s Larkin. That’s because Edelweiss is “undermodified,” as the grains were in the 1800s and early 1900s when breweries malted their own barley on site. In order for an undermodified malt "to reach its full potential for extraction of sugar and flavor,” it needs to go through decoction mashing, an old-school brewing technique in which a portion of the mash is separated out at least once during brewing, then boiled at an even higher temperature in order to extract more flavor before it's added back in.

Most craft breweries aren't set up for this labor- and time-intensive process because they don’t need to be: Modern malted barley gives up its flavors and sugars more easily. 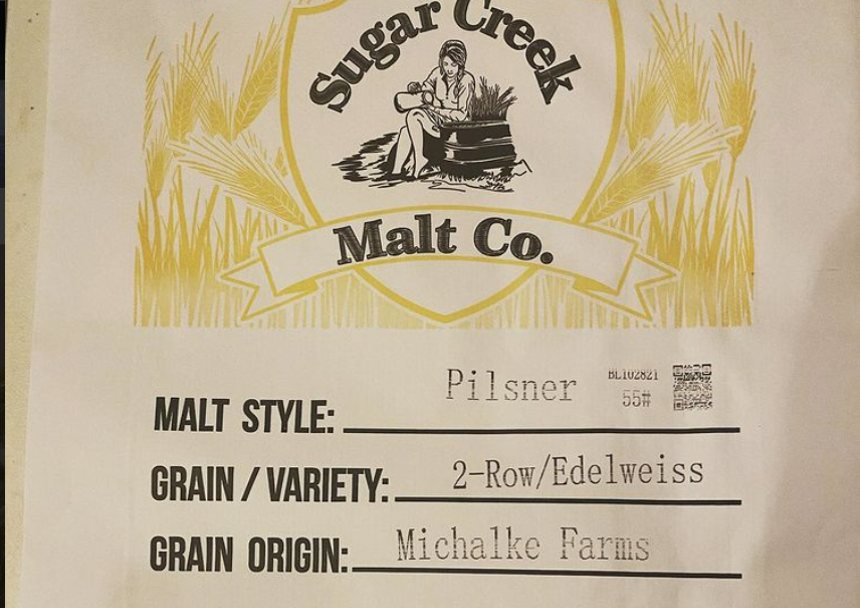 Caleb Michalke has named his version of the strain Edelweiss, after the Austrian flower.
Sugar Creek Malt Co.
Such is the case with Seedstock. "This was our first attempt at a true decoction mash by using multiple pots and burners to step the grain temperature up for the multiple rests we need to convert the ancient undermodified grain," says Adam McIlvenna, whose family bought Seedstock in September from its original owners Ron and Jason Abbott (who were also on hand for the brew). "It was an adventure and a long brew day, but we achieved our goal of converting the grain and hit our marks. It was a really cool experience. We cannot wait to see how this beer tastes."

But a few breweries, like Cohesion, have designed their equipment so that can take those extra old-world steps every time, in part because their brewers enjoy it or because they like the flavors it produces.

At Cohesion, "We utilized decoction for every beer, and since Caleb has found an old-world varietal that has been malted more in the way that would have been done in an earlier brewing era, we're set up from a process standpoint to be able to fully utilize this grain," Larkin says.

"With our Czech lager focus, we are also set up to hopefully represent what this malt can do in one of the styles it would have been used in when it was grown in Europe," he adds.
KEEP WESTWORD FREE... Since we started Westword, it has been defined as the free, independent voice of Denver, and we'd like to keep it that way. With local media under siege, it's more important than ever for us to rally support behind funding our local journalism. You can help by participating in our "I Support" program, allowing us to keep offering readers access to our incisive coverage of local news, food and culture with no paywalls.
Make a one-time donation today for as little as $1.