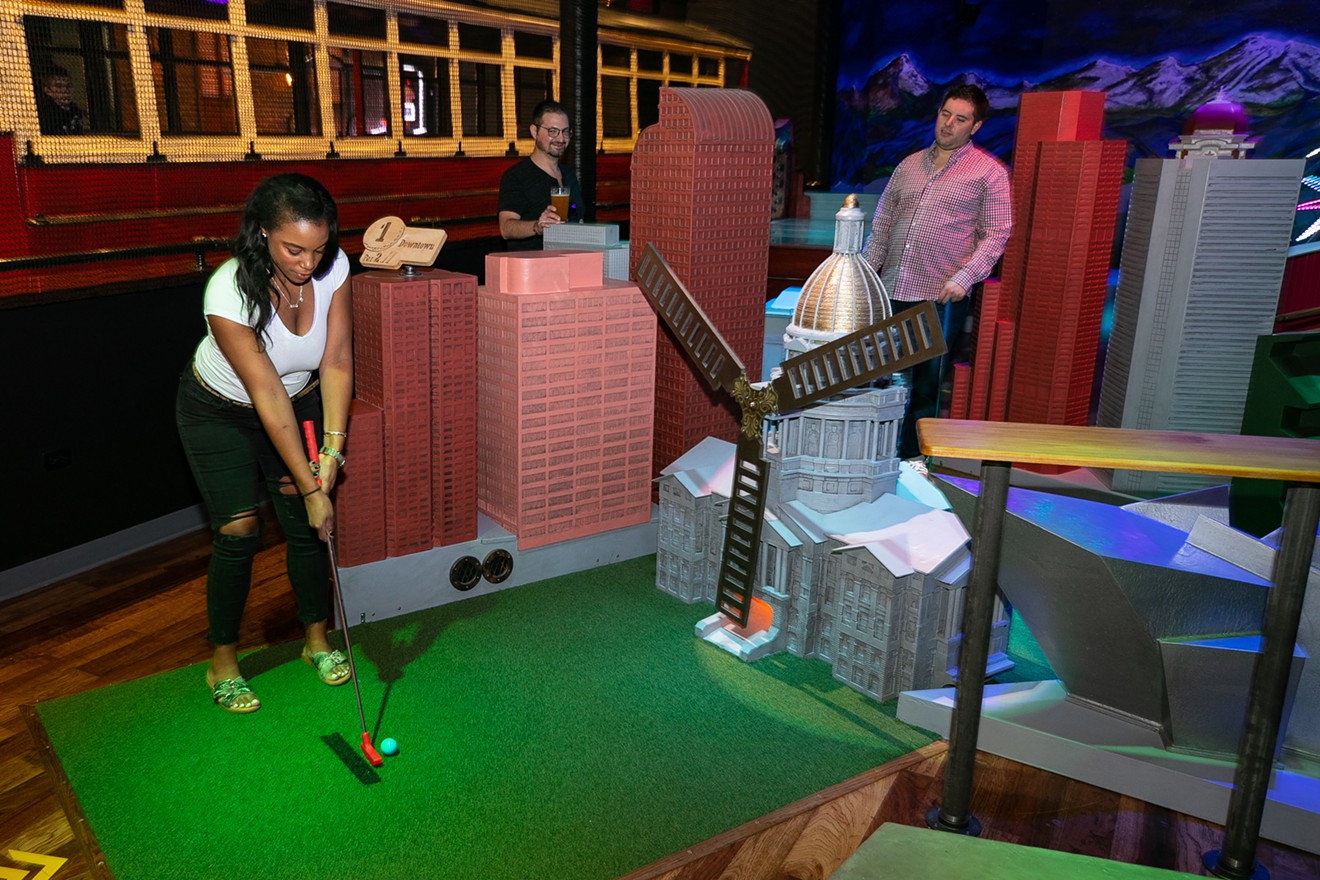 Feel like a giant surrounded by a replica of downtown Denver. Aaron Thackeray
A cavernous brick building that long ago was home to the Denver City Cable Railway Building downtown and became a restaurant in 1973 now has a new lease on life as something completely different. Families that once flocked to the Old Spaghetti Factory at 1215 18th Street can now return for a different kind of fun: Urban Putt opened this weekend, offering two nine-hole indoor miniature golf courses along with a full kitchen and bar.

Urban Putt founder Steve Fox opened his first golf-themed entertainment center in San Francisco in 2014, and its new Denver sibling is only the second in the country. Fox, whose pre-golf career was as the editorial director of PCWorld magazine, explains that he and his wife used to set up elaborate miniature golf courses at their house for dinner parties, so a friend suggested that he open a real entertainment center for the public. What was once an eccentric hobby has become a source of joy for people of all ages. 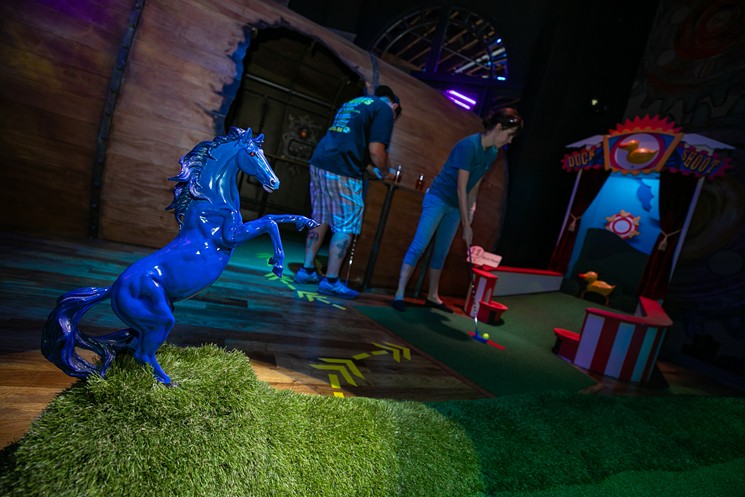 Don't let the devil horse spook you while you're putting.
Aaron Thackeray
But these aren't your standard putting courses with a few weird angles and a windmill (although there's one of those, attached to a scale model of the Colorado State Capitol). A team of set builders, engineers and software experts designed, built and programmed the elaborate system that includes everything from a steampunk submarine to a two-headed fortune teller.

Fox explains that one of the builders has also done extensive sculptural work at Burning Man while another was a set designer for MythBusters. "These are playable kinetic sculptures," he adds. 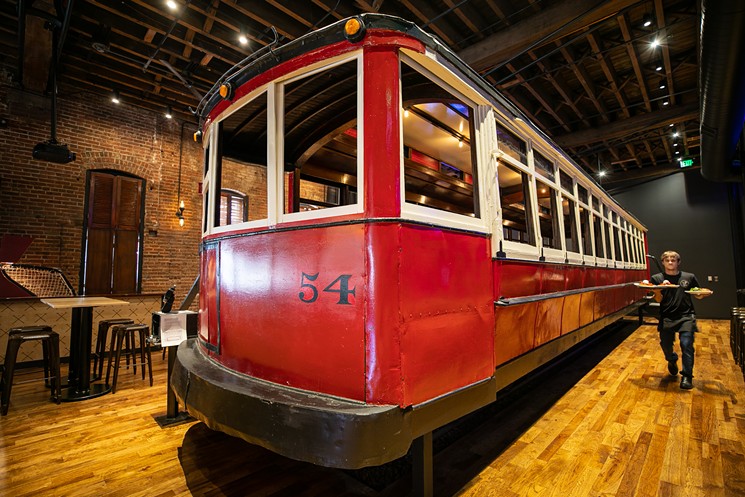 Urban Putt opened in the Old Spaghetti Factory space in LoDo on Friday, September 13.
Aaron Thackeray
The courses have two different themes, one designed with downtown Denver in mind, and the other offering a Colorado tour starting at Denver International Airport (complete with a tiny replica of the infamous "Blue Mustang" sculpture) and ending at Red Rocks Amphitheatre. Not every hole begins with a putter; some require players to drop their ball into a tilting maze, while others let you become a submarine captain loading depth charges to destroy an enemy ship. Levers, buttons and cranks abound, allowing kids to triggers noises and other special effects, and visual puns permeate each hole, revealing hidden humor with each visit.

If you frequented the Old Spaghetti Factory, you'll recognize the bright-red street car that's now in Urban Putt's dining room (moved across the building at considerable effort, Fox notes). The bar, which once belonged to boxer Jack Dempsey, is also a holdover, and the trestled arch above the bar was once part of the building's exterior. New community tables topped with rows of day-glo golf balls encased in clear enamel carry the sporting theme through to the bar area. 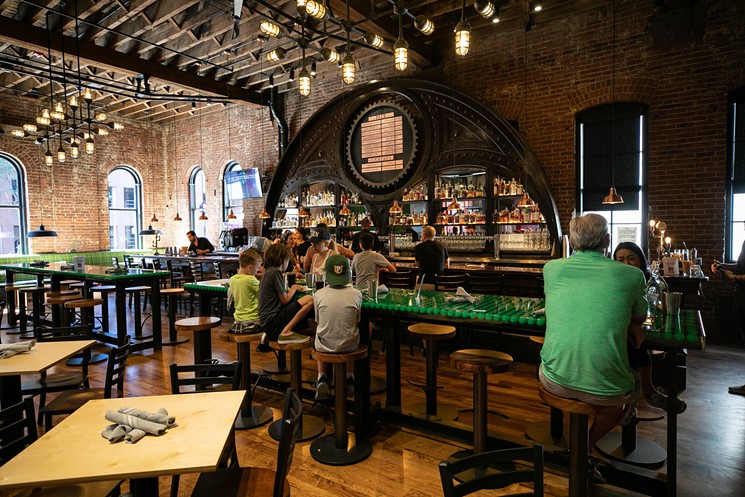 Urban Putt's bar retains some of the old building's architeture.
Aaron Thackeray
The menu, designed by chef Dane Boryta, starts out with sports-bar favorites like sliders, pretzel knots and mac and cheese, but encompasses a variety of tastes, with empanadas, lamb kibbeh (deep-fried wheat pastries stuffed with meat) and seared tuna. Larger plates comprise pizzas, sandwiches, entree-sized salads and even jambalaya. The bar holds a small range of local craft beers, wines and cocktails — and you can carry your drinks with you through the putting greens.

For more photos, see our complete Urban Putt slideshow.
KEEP WESTWORD FREE... Since we started Westword, it has been defined as the free, independent voice of Denver, and we'd like to keep it that way. With local media under siege, it's more important than ever for us to rally support behind funding our local journalism. You can help by participating in our "I Support" program, allowing us to keep offering readers access to our incisive coverage of local news, food and culture with no paywalls.
Make a one-time donation today for as little as $1.