Valdez students test some crepes. Kristen Heeres
I’m asked frequently how it is that I ended up a food writer, and I give a rather literal answer to the question: I applied for Westword’s restaurant critic job back in the spring of 2010, and I was hired. So began my career in food journalism.

If I’m really honest, though, I’ll admit that I only became a food writer after a lot of practice: I practiced writing incessantly from youth (I was the weirdest of weird kids, skipping recess to pen short stories that I stuffed into an overflowing folder), and I practiced eating — or, rather, practiced thinking about what I was eating instead of mindlessly shoveling food into my mouth — after first becoming interested in cooking, food politics, dining and wine in college.

After almost a decade as a professional food writer, I’m still practicing. The writing is the more important part; you do enough tasting on this job that you can’t help but refine your palate, and if you’re a curious person, you research the context, history and culture of food as you report your stories. But writing is hard, and it never stops being hard, even if sentences occasionally coalesce into something transcendent and meaningful — and if I hadn’t been that seven-year-old who refused to put down the pen, I’m not sure I’d be able to continue the hair-pulling forging of paragraphs that is my life today.

I had a chance to ponder all of this recently when I visited Kristen Heeres’s fourth-grade class at Valdez Elementary School, a DPS Dual Language school where a fresh generation of kids is just beginning to discover the usually frustrating but occasionally ecstatic world of articulating thoughts on paper. The kids had read All Four Stars, a story about a sixth-grader who loves to cook and accidentally becomes a restaurant critic for a big New York City newspaper; now Heeres was teaching them the fundamentals of writing by tasking them to write their own reviews. But she’d also asked me to come talk about my job so that the students could see that all of their efforts in learning sentence structure weren’t in vain. If they just put their minds to it, they, too, could eventually become food journalists...if journalism continues to exist two decades from now. 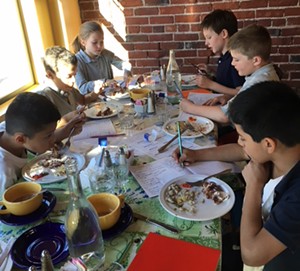 The kids descended upon me, ready to grill. Most had questions about the cloak-and-dagger aspects of the job. Yes, I made reservations under a fake name when I was the critic, and I used a credit card with a fake name, as well; no, I didn’t bother with wigs or disguises, though other critics do. They were concerned about the disgusting things they’d have to eat if they were critics. They wondered if I’d been to their favorite restaurants, which had a common theme of offerings like video games, crayon-related activities and particularly good kids’ menus. One precocious girl wanted to know if I’d eaten at Potager; she proceeded to test me on the ins and outs of farm-to-table dining, suspicious of my knowledge. And almost all of them had something to say about my extreme height.

But above all, we talked about writing. They’d reviewed Swedish Fish, noting its ruby color and cloying sweetness in literal terms. How else could they describe eating candy? I asked. Could describing the way it made them feel say more about the eating experience than a straightforward, “It tastes like sugar”? Could they write something about the history of the candy maker, or the Swedish Fish’s place in broader candy culture, or their own history with the sweet? Could they share something about the context in which they were served the candy? How was the service? How was the ambience? Is anyone even listening to me?

But elementary-schoolers really do have absorbent brains, because even with their sugar fixations, it’s clear that they took some of my suggestions to heart. At the culmination of the project, Heeres took her class to review Crepes ’n Crepes, at 3000 Zuni Street, conveniently close to the school, and several of the students built metaphors, emotions and even the address’s history into their final piece. 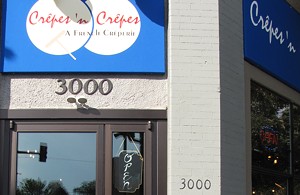 Courtesy of Crepes ’n Crepes
I learned from reading those pieces that Crepes ’n Crepes used to be Mell’s Cheese, and that the building that houses it was built in the 1920s. I learned that at least one waitress at the place speaks French. And I learned that kids universally give it four out of four stars, which seems like a useful note for parents. Our favorite of the ten reviews is reprinted here, but I can’t resist sharing a few other choice excerpts.

“You will feel moderately cozy and a tad hot.”

“With a side of red pepper roulade and a basil walnut pesto, you can decide how to spice up the chicken crepe, and your love life.”

“You see that the crepe looks neat like a baby wrapped in a snug blanket.”

“There are no downsides whatsoever to this restaurant.”

The best title: “Open the Drapes on Crepes ’n Crepes!”

Time to raise the curtain on the next generation of food critics! Here's the winning review:

A Trip to Paris in 30 Minutes or Less, by Michal Blackfish (aka Emil Renaud)

Big things come in small packages. This small restaurant on the corner of Zuni and 30th might look small, but it’s the small things that pack the biggest punch.

When you first see this place you might not think that so many options could be available in a such a little location but the moment you walk in it feels like you’ve been punched in the face with all different sorts of smells. Chocolate and banana, ham and cheese, sweet and savory aromas, and more.

After you get past the amazing smells, you start to notice all sorts of little details that make everything so much more special. It is as if you’re being sucked down into a portal to Paris. As soon as you sit down, there is fresh water waiting for you. They also have a huge menu variety! All the way from chicken crepes to Nutella, banana, and strawberry crepes.

I personally think you should try the chicken crepe and the nutella, strawberry, and banana crepe. Their flavors are so unique on your tongue it is hard to handle the explosion of flavors. They really are like a trip to Paris but in 30 minutes or less. This place is so good that it was Denver’s best restaurant in 2012! But if you don’t live close to Zuni and 30th don’t worry because there is another location in Cherry Creek.