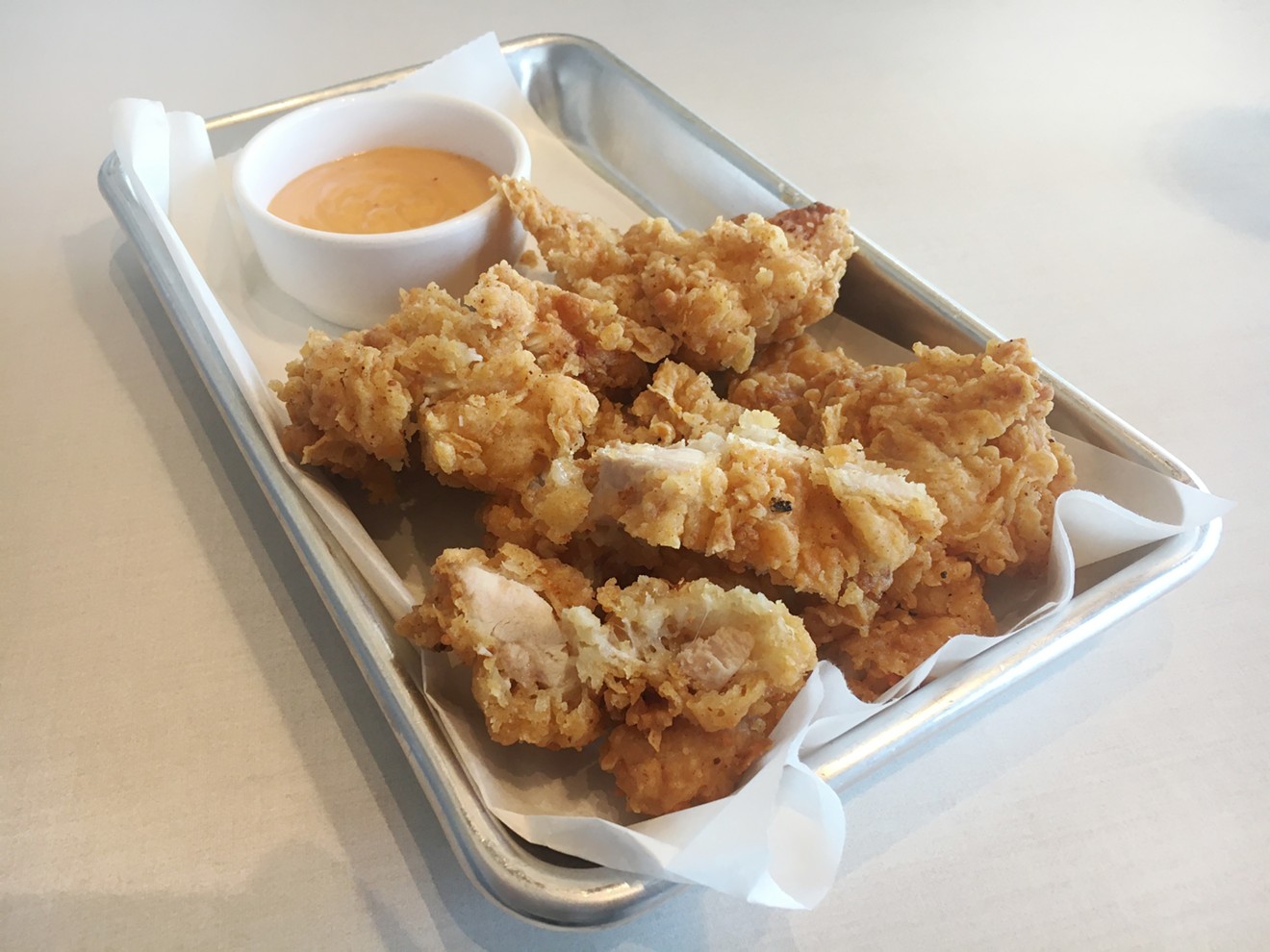 Thai-style fried chicken is new at Hey Bangkok. Mark Antonation
Jay Dedrick, co-owner of the Swing Thai mini-chain, says that two decades can be pretty hard on a restaurant. That's why he and his partner, Siriporn “Duke” Tayaputch, decided to rebuild their original fast-casual Thai eatery at 301 South Pennsylvania Street — and while they were doing that, they changed up the concept, too.

"The building has taken a beating over the last 22 years, and I needed to remodel," Dedrick explains of the wedge-shaped brick edifice that was previously a vacuum cleaner and VCR repair shop. "And I've been looking to simplify. In Thailand, if you want pad Thai, you go to a place that makes nothing but pad Thai."

That kind of specialization probably wouldn't fly in Denver, but Tayaputch and Dedrick's new concept, Hey Bangkok, narrows down its menu to a dozen options, including appetizers, soups, salads and entrees. The entire roster hangs above the kitchen on a backlit menu board complete with photos of each dish; it's both utilitarian and evocative of Bangkok's bustling markets. 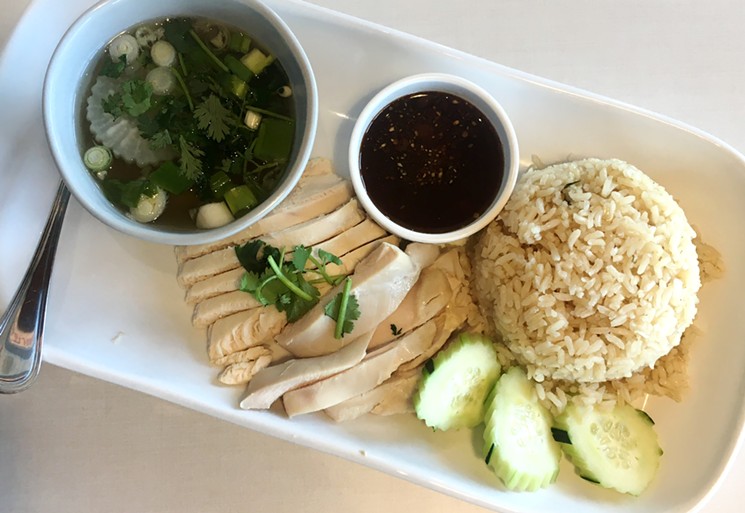 Kaw mun kai is an exercise in simplicity, with moist chicken, jasmine rice, a chile-ginger dipping sauce and a side of soup.
Mark Antonation
"I wanted twelve items to showcase a few new things; over the years I've traveled to Thailand and learned more about a few dishes," the owner says. "Our motto is "Simplicity is happiness.'" So Swing Thai favorites including pad Thai, drunken noodles and tom kha are back, along with newcomers such as boneless Thai-style fried chicken, kaw mun kai (also known as Hainanese chicken) and pad gra pow, a spicy basil stir-fry served on rice.

Dedrick explains that one of the new dishes, kaw mun kai, is sought after by fans throughout Southeast Asia who are looking for perfectly tender and juicy chicken, flavorful jasmine rice cooked in chicken stock instead of water, and a peppy dipping sauce made with ginger, Thai chiles, soy sauce, vinegar and other seasonings. The three ingredients come together to form a bite that's more than the sum of its parts, and a side of simple soup offers a palate refresher between bites. In Thailand, the chicken is generally boiled and very lightly seasoned, but Hey Bangkok uses a high-tech CVAP oven to dial in the right temperature and moisture level.

"This was all planned before the pandemic," Dedrick notes, though the redesign certainly takes social distancing into account. There's no counter service at Hey Bangkok, and tables are widely spaced for now. A photo mural on the dining room wall depicts umbrella-covered tables in front of a weathered Bangkok restaurant, adding the illusion of depth to the space. There are only twelve items on Hey Bangkok's menu.
Mark Antonation
The owner gave the restaurant a name change along with the new look and menu so that it wouldn't be confusing to Swing Thai regulars wondering where the other dishes had gone. You can still find those at the two remaining locations, at 4370 Tennyson Street and 845 Colorado Boulevard. Dedrick notes that those two locations have done fairly good business during the pandemic because the food lends itself well to takeout and delivery (Swing Thai maintains its own delivery staff rather than outsourcing to third-party services).

Hey Bangkok is now open from 11 a.m. to 9 p.m. daily. Call 303-777-0559 or visit the restaurant's website for details and ordering.
KEEP WESTWORD FREE... Since we started Westword, it has been defined as the free, independent voice of Denver, and we'd like to keep it that way. With local media under siege, it's more important than ever for us to rally support behind funding our local journalism. You can help by participating in our "I Support" program, allowing us to keep offering readers access to our incisive coverage of local news, food and culture with no paywalls.
Make a one-time donation today for as little as $1.