You'll Get Hooked by Fish N Beer, a Real Keeper in RiNo

Trust us on this one: Get the buffalo blowfish tails at Fish N Beer. Danielle Lirette
Your first impression of Fish N Beer: It’s tiny.

As in hunch-your-shoulders-so-you -don’t-hit- the-girl-next-to-you tiny. Constantly-shift-your-purse-so-it-doesn’t-bump-servers-as-they-pass tiny. There’s nowhere to stand other than by the two narrow counters, squished between the stools and white booths; there’s no separate bar, no vestibule. And stand you will, waiting for the holding pattern to end and your name to be called. As you kill time dodging folks, drinking beer and throwing back oysters — ideally, grilled ones with chile butter and even better twice-dredged, cornmeal-crusted ones tucked on a squishy slider bun — you’ll be forgiven for simultaneously praising and cursing this space that feels like a repurposed shipping container. Or is it a sardine can?

Actually, you’re standing in neither. You’re just part of the action in this fifty-seat sliver of a building on the northeastern edge of RiNo. But the fact that Fish N Beer is perennially packed and loud — Genesis and Madonna blaring, guests shouting to be heard, cinderblock walls bouncing (not absorbing) sound — is very much part of the appeal. If the past few years have taught us anything, it’s that while bigger may be better for certain, ahem, things, smaller and louder are no-brainers when it comes to instant camaraderie and ambience.

What you notice next, after the restaurant’s wait and noise and jam-packedness, is that the person whose livelihood is most at stake here is actually here, in the house. And I don’t mean Kevin Morrison, the experienced restaurateur/partner who brought us Tacos, Tequila, Whiskey (aka Pinche Tacos). I’m referring to Aniedra Nichols, the 39-year-old chef/partner who left the unsinkable ship that is Elway’s to join Morrison in bringing this offbeat, not-your-daddy’s-fish-house to life. 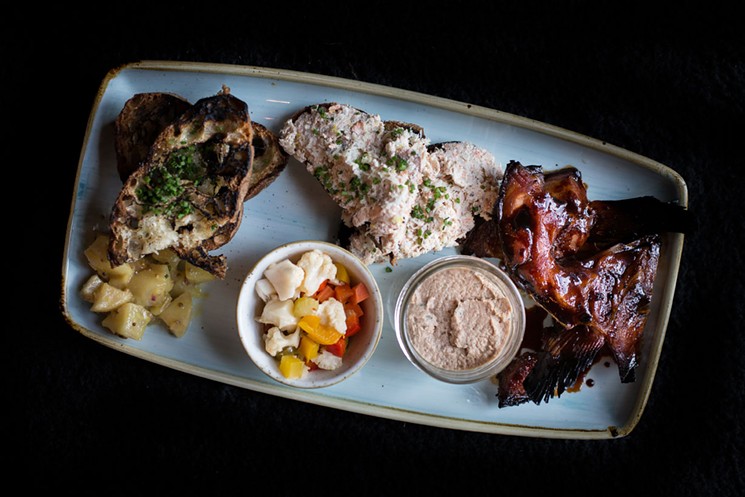 Charcuterie board at Fish N Beer.
Danielle Lirette
Some nights, Nichols — with her tight bun, tattoos and kind but penetrating eyes — is in full view in the open kitchen, hardly breaking a sweat even though the oak-fired grill is raging behind her as she calmly pipes scallion whipped potatoes. (Make sure to order those, with a soulful bowl of crimini gravy.) Other nights, she trades in her apron for civilian attire. “I decided if [the restaurant’s] my life, I need to know all aspects of it,” she explains. Nichols’s unexpected presence on the floor, where she can deliver plates, witness first impressions, answer questions and later make necessary adjustments, is to be respected, especially in this day and age when name chefs are often just that: a name. But whether Nichols is in or out of an apron, in front of or behind the counter, you’ll respect the food that her kitchen creates.

Fish N Beer is nothing like the casual operation its name suggests. You won’t find fish and chips, clam chowder or a fried catch of the day. Instead, the menu includes a tightly curated list of oysters, scallops and mussels, plus a few fish entrees, seasonal sides, one soup (mushroom), one sandwich (crab-lobster roll) and one dessert (chocolate cream puff with chocolate mousse and almond brittle). Underutilized cuts make winsome appearances: There are buffalo blowfish tails, with all the flavor and none of the fattiness of chicken wings, and salmon collars, popular in Asia but relatively unknown here. And the cornmeal-crusted smelts are sure to make Midwesterners homesick.

Crispy whole grilled bass.
Danielle Lirette
The restaurant could easily play up its casual side and cut corners on sauces, garnishes and sides, but instead executes them as if a larger staff were operating at a tony address for a well-heeled clientele — maybe even at Elway’s. A wispy, refreshing salad of celery hearts accompanies the happy-hour blowfish tails. Roasted red-pepper remoulade cushions impeccably fried crab cakes loaded with sweet lump crab and flecks of quinoa. Spicy puttanesca, laden with capers, anchovies and kalamatas, merits its own entree, not just a side of roasted cauliflower that you might easily overlook. Apple mostarda, with appreciable morsels of fruit and just-right snappiness from whole-grain mustard, accents a dynamite seafood charcuterie platter, with whipped tuna tonnato, soy-glazed salmon collars, and grilled bread slathered with smoked fish dip. (Too bad the tonnato can’t be ordered à la carte; it’s so good, you’ll want more.)
Brussels sprouts are charred to an intense realm of smokiness and tossed in bone-marrow butter.

The New York strip steak, one of two items in the “Not Fish” entree category, benefits from an earthy crust of salt, pepper and ground San Sebastian coffee, the same stuff used for post-prandial drinks. In a steakhouse, where you’re primed to think of beef for dinner, it would bring down the house. Here, the steak is woefully under-ordered; top billing goes to the whole grilled bass with chile butter that melts into its crackly skin. Fish N Beer sells upwards of fifty bass a week, which seems a near-impossible feat in an era when we like bones, not to mention small-mouths and intricate spines, removed. But that steak accomplishes its own near-impossible feat: Rather than being a dish to shy away from, as you usually do when an entree seems so far from the heart and soul of a place, it proves that Fish N Beer is far more than the casual fish joint it pretends to be.
If Fish N Beer can stray so far from its mission and still put out a spectacular steak, with just the right amount of red, that seductive coffee crust and mouthwatering char, what else can this team do? What can’t it do?

And that’s the magic of Fish N Beer: It takes preconceptions and turns them on their head. A fish house killing it with steak? Outstanding charcuterie made of fish, not pork? Staff as versed in French rosé as the beer in its name? Check, check and check. Under Nichols’s watchful and experienced eye, this tiny kitchen does everything, from wood-grilled fish to smelts to mousse. The restaurant might be small in scale, but it’s nothing short of a smash.