Zaidy's founder Gerard Rudofsky and new owners Beth Ginsberg, Max Appel and Joel Appel cut the ribbon on the new location August 17.
Molly Martin
What we saw: The August 17 grand opening of Zaidy's Deli in its new Hilltop location felt like a family reunion. Hugs and smiles were everywhere as friends, family and fans of the original, which opened downtown in 1985 and moved to Cherry Creek in 1992, gathered outside for the ribbon-cutting ceremony. "Mazel tov!" said a women walking up as she greeted Max Appel, who owns the new location along with his son Joel Appel and Beth Ginsberg, owner of Trompeau Bakery on South Broadway and former owner of the Bagel Store (now Rosenberg's Kosher on South Monaco Parkway); founder Gerald Rudofsky is also a partner.

Another common phrase: "The parking!" At the now-vacant Cherry Creek address of 121 East First Avenue, parking was a pain point for many loyal customers. Not so at the new space, which has a huge parking lot out front for hungry fans of pastrami on rye, matzoh ball soup and black-and-white cookies.

The interior is more spacious, as well, with added booths and tables and a patio with extra seating out front. A space dubbed Zaidy's Next Door will become a bakery and market showcasing the fresh bagels, challah, rugelach and more made by Beth, "the queen of Jewish baking in Denver," according to Joel  — though you can get a taste of her baked goods now at the walk-up counter in the restaurant.

The opening ceremony began with a blessing from Rabbi Richard Rheins, the same rabbi who married Joel and his wife, Tiffany, seven years ago. "Zaidy's is a place where we come in for blessings, for nourishment, for food, as well as for the soul and the spirit," he began. "The community needs Zaidy's." Then the rabbi, along with the four owners, hung a mezuzah, a small case containing a kosher scroll with a prayer handwritten on parchment by a scribe, in the doorway, as "a reminder of love in our world."

After words of thanks for customers and the staff, many of whom are new to Zaidy's, the owners cut a red ribbon tied on the door, declaring to the small crowd gathered outside that it was, finally, time to come inside Zaidy's to eat once again. 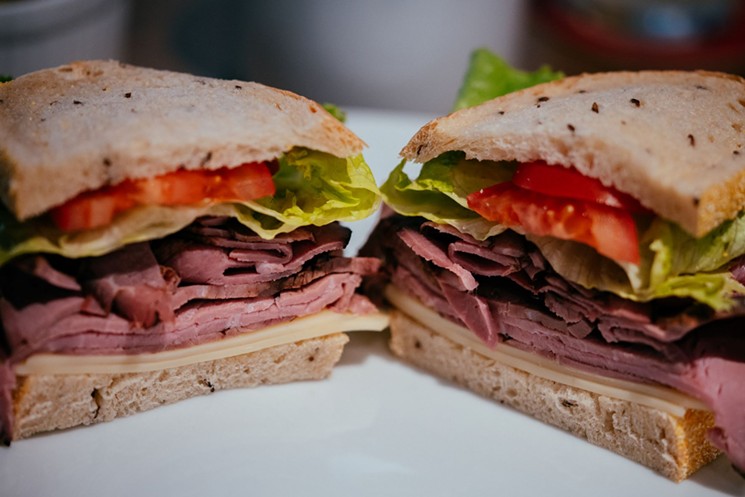 You can't go wrong with a classic deli sandwich at Zaidy's.
Jeff Fierberg
What surprised us: Nothing. And that's kind of the point. After a closure that left many, including Gerard's son Jason, heartbroken, there is comfort in knowing that this longtime Jewish deli is back in fine form.

"Zaidy" means "grandfather" in Yiddish. "The name Zaidy's evoked family, food, friendship," Gerard explains, "and I think that was the hallmark of Zaidy's, and I know it will be in the future."

The opening of this location isn't so much a new start as it is an "incarnation," Gerard says, of both himself and the original. Its debut in this location was a reunion with a longtime standby, re-energized and a little shinier than before, but still the same at its core.

"I'm thrilled that this name will be carried on long after I'm gone," Gerard concludes.

And so are we. Mazel tov!
KEEP WESTWORD FREE... Since we started Westword, it has been defined as the free, independent voice of Denver, and we'd like to keep it that way. With local media under siege, it's more important than ever for us to rally support behind funding our local journalism. You can help by participating in our "I Support" program, allowing us to keep offering readers access to our incisive coverage of local news, food and culture with no paywalls.
Make a one-time donation today for as little as $1.