Elon Musk Is a Farting Unicorn Fan, but Blew Off Creator Tom Edwards Elon Musk recreated the farting unicorn in this tweet. twitter @elonmusk
Tom Edwards wants to clear the air with Elon Musk. The Evergreen potter says it’s been over a year since the multi-billionaire genius behind Tesla first lifted one of his most popular designs: a whimsical drawing of a unicorn passing rainbow-colored gas into a tube that seemingly powers a small electric car.

Edwards learned that his art had been lifted when a friend who’d bought a Tesla broke the news: Edwards’s magical, farting unicorn was being used to show off Tesla’s new sketch pad, embedded in every one of Musk’s electric cars.

Wrong. Since discovering that his farting unicorn had been pilfered, Edwards has gotten exactly zero dollars from Musk. Edwards dreamed up the image back in 2010, as a design for one of the ceramic pieces he sells on wallypots.com. Written on the mug: “Electric cars are good for the environment because electricity comes from magic.” It’s a joke, he explains, because lots of people don’t understand where electricity comes from.

The $28 mug has been one of Edwards’s biggest sellers. Musk clearly liked it. In February 2017, he tweeted a photo and noted that it was “maybe my favorite mug ever.” 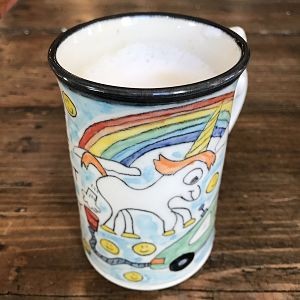 An original farting unicorn mug was a "favorite."
[email protected]
Thanks to Musk’s 22 million Twitter followers, the piece enjoyed a modest bump in sales. “I sold 100 coffee mugs because of that tweet,” Edwards says.

But a couple months later, Edwards’s friend told the artist to raise a stink, because the gassy unicorn had turned up in an unlikely spot: as the icon to a link to his new Tesla’s sketchpad, an app on the touch screen that comes with the latest software update, V8.1. It’s accessed by pressing the “T” three times.

Edwards recognized his unicorn, surrounded by his standard smiley faces and rainbows. And not only was it in every Tesla, but it was being advertised as part of the operating system. In another tweet showing off Tesla’s hidden sketchpad feature, Musk again used Edwards’s cartoon image, next to a picture of a displeased Mona Lisa.

And then came the Christmas card from Musk to Tesla owners on December 26. As Edwards’s friend reported, “When I turned on my car this morning, Elon wished me a Merry Christmas using a counterfeit Wally design. Merry Christmas to the original genius!”

After that, Edwards talked with three attorneys, all of whom seemed flabber-gassed. He ultimately hired Timothy Atkinson of the Denver firm of Ireland, Stapleton, Pryor and Pascoe.

Atkinson sent a formal letter to Tesla’s general counsel. “Please don’t take this as a shakedown,” the attorney wrote. “What we are seeking instead is a discussion, and a mutual decision in a way to value the past and continuing use of the image, in a way that both sides can feel good about.”

“We’re tugging on their coattails in a friendly manner,” Edwards explains. “I want to get paid for my artwork.”

Musk’s lawyer, Todd Maron, has not responded to that letter, nor to Westword’s request for comment on the case. 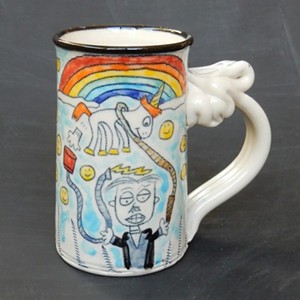 “It’s been a month, and it’s crickets,” he says. “I’d like for them to contact my lawyer and start the process for what this unicorn is worth.”

Although Edwards hadn’t copyrighted the unicorn image when Musk first used it, he’s been assured by his attorney that it’s protected. “When you make an image and sell it out in the world, there’s a de facto copyright,” explains Edwards. He has since obtained an official copyright for his flatulating unicorn.

Edwards isn’t a materialistic guy, having thrown pottery the old-school way since he graduated from college forty years ago, hand-spinning and painting his designs in a modest studio attached to his mountain home. He and his wife, Lori Crane, always encouraged their daughters, Monica and Robin, to draw outside of the lines. Robin (a former Westword contributor) went on to become a musician who plays under the stage name Lisa Prank. Her 2016 album was one of Rolling Stone’s top twenty albums of the year, “ahead of Kanye West,” beams her proud father. He and Lori recently returned from Seattle, where they saw their daughter open for Liz Phair in a sold-out show at the legendary Crocodile nightclub.

A rich man in so many ways, Edwards just wants his due from Musk, whom he truly admires. “Musk is one of the most fascinating people on the planet,” he says. “I’d really love a check.”

He doesn’t even want a free Tesla for his trouble. Edwards has what he calls his own “status symbol”: a Toyota Echo sporting 315,000 miles, with manual locks and windows.

Update: Soon after this story appeared, Elon Musk and Lisa Prank got into it on Twitter. "Your company has been using his creative property for a year without credit or compensation," Tom Edwards's daughter tweeted. "Don’t you think artists deserve to be paid for their work?"

To which Musk replied: "Have asked my team to use a diff example going forward. He can sue for money if he wants, but that’s kinda lame. If anything, this attention increased his mug sales."

For his part, Edwards is still hopeful that the matter will be settled amicably. "I'm optimistic that Elon Musk will look at this from the artist's perspective and that he will contact my lawyer," he says.

Twitter
KEEP WESTWORD FREE... Since we started Westword, it has been defined as the free, independent voice of Denver, and we'd like to keep it that way. With local media under siege, it's more important than ever for us to rally support behind funding our local journalism. You can help by participating in our "I Support" program, allowing us to keep offering readers access to our incisive coverage of local news, food and culture with no paywalls.
Make a one-time donation today for as little as $1.