“Flow,” by Jae Ko, rolled paper. Courtesy of Robischon Gallery
Abstraction has been on a tear in the 21st century, as evidenced by Mark Bradford being chosen this year to officially represent the United States in the premier art event on earth, the Venice Biennale. Earlier this summer, a major Bradford show pairing his work with that of Clyfford Still was presented here in Denver, and now there’s more proof of abstraction’s consistent appeal in contemporary art, in the form of three solos and a group show at Robischon Gallery.

"JK1004" (left) and "JK1005," by Jae Ko, paper, ink and glue.
Courtesy of Robischon Gallery
In the entry space, Jae Ko: Flow showcases the unusual paper works of Jae Ko, an internationally known Korean-American artist who’s exhibited her conceptual abstractions in this country since the late 1990s. Although Ko also does “drawings” with vinyl cords, her signature creations are those made from distorted and sometimes dyed rolls of repurposed adding-machine tapes. Though a few of the wall pieces here are luxuriously colored — for these, Ko soaked the paper rolls in a deep-blue dye, then shaped them while they were soft into simple geometries — the anchor is the enormous “Flow,” a site-specific installation that has a landscape quality.
“Flow” is also made out of paper rolls, but instead of being soaked and dyed, the paper in the rolls has simply been pulled out into loose curves. The result is an impressive heap of looping forms and voids climbing the wall; the loops are similar yet different, their specific form determined by the force of gravity acting on the heavy stacks of paper. Ko has written that when she works with the rolls of paper and taps them, “they just collapse, then fold into amazing shapes.”

"Unsayable Lights," by Kate Petley, acrylic and archival ink on canvas.
Courtesy of Robischon Gallery
In the central space, the group show Radial includes some choice paintings by Stephen Westfall, Don Voisine and Kate Petley, who all use geometric shapes to build their compositions. Both Westfall and Voisine are interested in creating simple arrangements of rectilinear shapes and manipulating the illusion of three-dimensionality, so that some parts of the patterns seem to recede into space behind the picture plane on which the other parts sit; it’s kind of a clever take on the classic figure-to-ground relationship of realist paintings. The Petley paintings — in particular, the majestic “Unsayable Lights” — also have that figure-to-ground component, but Petley’s approach is quite different from that of Westfall and Voisine. They paint precisely, and Petley is expressive; her blocky shapes have wavering lines and were done without the use of straight-edges. 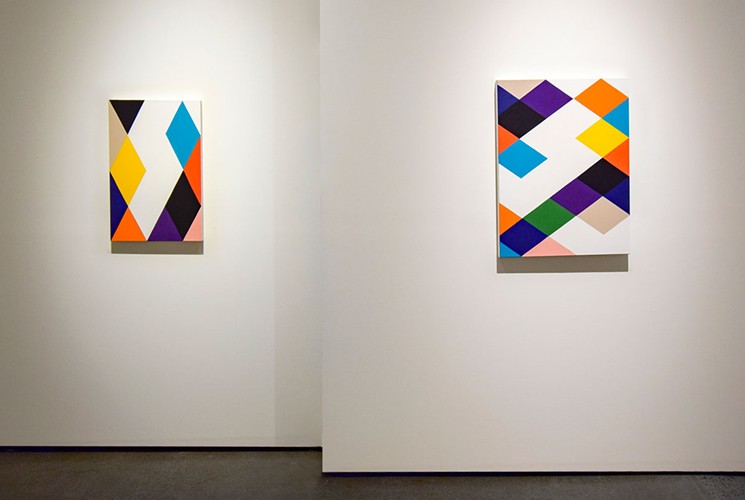 "Del Parto" and "Arabesque," by Stephen Westfall, oil and alkyd on canvas.
Courtesy of Robischon Gallery
Using idealized rectilinear forms but carrying them out informally is also key to the work in a solo with the novel-length title Ted Larsen: Insider Influence, the Space Program and Other Specified Domains, which sprawls through the cluster of three spaces running parallel to Robischon’s main rooms. Sculptor Ted Larsen builds his mostly wall-hung pieces out of metal strips that have been freely joined into elaborate skeletal constructions. The nuts and bolts that hold the pieces together have been casually placed on the strips of metal that comprise most of the sculptures. These strips are multi-colored, but Larsen hasn’t painted them; he finds junked-car body parts and other recycled metal items, then cuts them into horizontal strips with an industrial chopper so that the cuts are clean and the original paint left undisturbed. 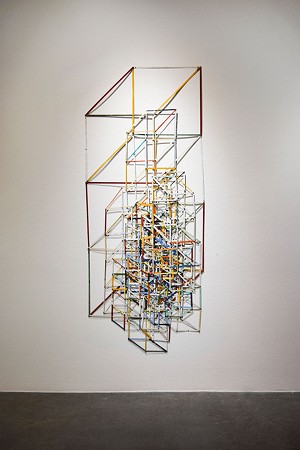 "Daily Special," by Ted Larsen, salvage steel and hardware.
Courtesy of Robischon Gallery
A number of the Larsens are small, wall-hung sculptures made of vertically and horizontally mounted metal bars that form an organized tangle of components surrounding open spaces. For “Player Coach,” a horizontally oriented construction mounted onto a back panel is used to suspend a roughly cubic shape that hangs off the front. The colors of the scuffed-up paint on the found metal give the piece a quiet palette of sun-faded orange and yellow, with dirty white the predominant tone. The way that “Player Coach,” as well as other Larsen works, strikes a balance between the simplicity of the metal strips and the complexity of the ultimate compositions is very successful, as is the juxtaposition of the underlying geometric forms with their rough approximations through the pointedly crude construction and gritty found surfaces. There are more than a dozen of these pieces, allowing us to see Larsen’s small sculptures in depth, and each one is sensational.

Among the handful of larger Larsen works is the impressive “Half Naked.” Larsen has built a complicated skeletal form that changes scale as it rises. Perched on a perfectly executed plywood plinth are large, stepped outlines of rectangular shapes, followed by constructions made of smaller elements that get tighter and tighter. The ins and outs of the linear composition seem to metastasize off one side, lending the piece a precarious profile. More stable in appearance is a large wall piece, “Daily Special,” that looks like flattened three-dimensional solids.

The Robischon finale, Derrick Velasquez: Constant Denial, is something of an extension of the artist’s current show at the Museum of Contemporary Art Denver that runs through August 27. Unlike the MCA show, this one has two examples of Velasquez’s best-known type of work: a wall-mounted wooden spine over which lengths of vinyl have been laid, forming symmetrical compositions. The specific shape of each of these pieces is determined by gravity acting on the vinyl as it follows the contours of the central spine; Velasquez has stacked the lengths of vinyl so that different colors create simple compositions.

"Preservation of Monument: Ultimate Trace" (left) and "Preservation of Monument: Tall Field," by Derrick Velasquez.
Courtesy of Robischon Gallery
Other Velasquez pieces here seem to pick up where those at MCA Denver leave off, including a handful of works from his “Preservation of the Monument” series, which are closely aligned with his gold-molding installation in the MCA atrium. Though it could be argued that Velasquez’s form-finding vinyl works are architectonic because they’re based on tensile concepts, his interest in buildings is even more clearly expressed in these works, which employ cheap, ready-made cast moldings whose original purpose was to add a tawdry, ersatz traditionalism to a building. In “Imperfect Future,” Velasquez has created a Greek key pattern out of the molding that runs across the floor; a similar pattern is used for “Ultimate Trace,” a wall-mounted sculpture. But the tour de force of the “Preservation of the Monument” pieces is “Tall Field,” a wooden column with the moldings, painted bright blue, lined up vertically inside the concave interior of the column.

Although abstraction never really went away, these shows prove it’s back with a vengeance...and a conceptual edge.