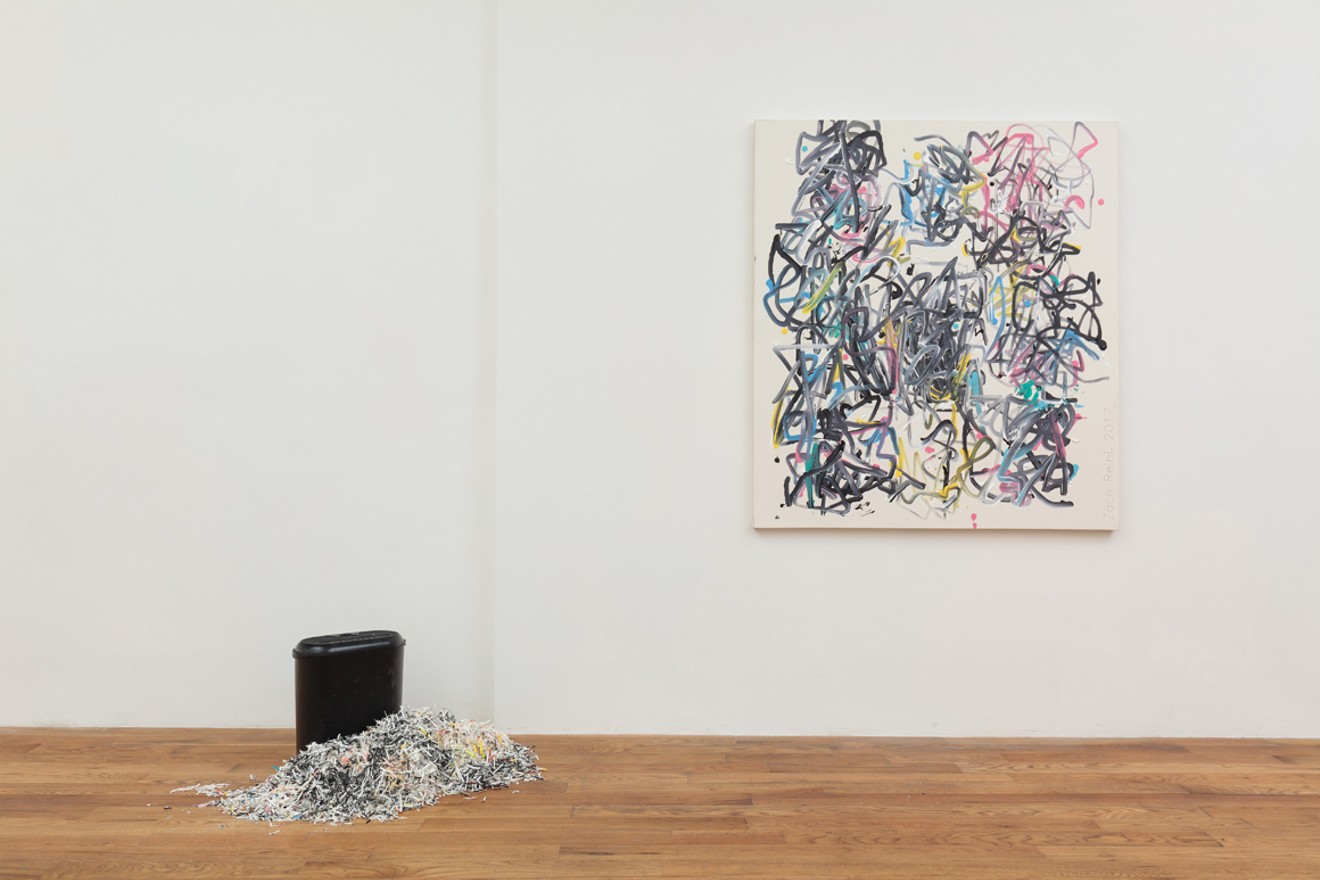 Zach Reini, “Untitled (Shred it),” paper shredder and shredded paintings (left); “Deus Ex Machina 1,” acrylic and Sharpie. Wes Magyar
When I’d come across pieces by Zach Reini in the past, I was always struck by the clever ideas underlying his works, and how beautifully crafted everything was. And that was again the case when I caught his solo now on view at Gildar Gallery, Zach Reini: A Leaden Stride to Nowhere.

That title might lead some to imagine that the show is kind of a bummer, and there are admittedly some down notes, such as shredded paintings. The overall thrust is uplifting, though, because Reini is relentlessly extending his insightful exploration of the nature of art production, and of his own mark-making. 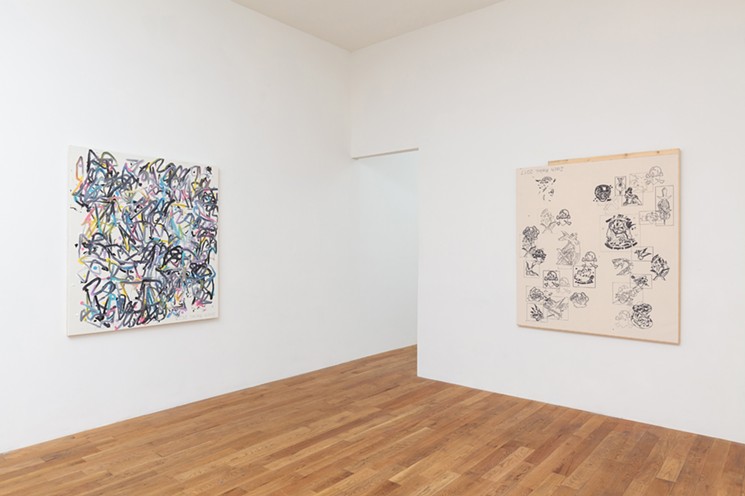 Zach Reini, “Deus Ex Machina 2” (left) and “Pay Day Sleeve," both acrylic and Sharpie on canvas.
Wes Magyar
The Reinis that I best recall involved references to pop icons, in particular Mickey Mouse. Those were surely only a hop, skip and a jump away from what’s going on in “Pay Day Sleeve,” whose imagery is appropriated from old-school sailor tattoos. (Reini has a serious interest in the form; he's heavily tattooed himself.) Scattered unevenly across the surface of the canvas are linear depictions of the tattoos, things like blue birds and a topless mermaid; a Sharpie that Reini's attached to a machine makes the drawings based on digital depictions of the antique tattoos that he found on the Internet. (Such classic tattoos are in the midst of a revival.)

“Pay Day Sleeve” is linked to the earlier cartoon character pieces through the charming naiveté of the originals. But “Pay Day Sleeve” is also linked to “Deus Ex Machina 1” and “Deus Ex Machina 2” — not because of any shared imagery, but because of how they were made. Reini again used his machine for these, but here the Sharpie was joined by a brush, and Reini applied pigments to the canvas before the machine passed over those areas. The results are all-over abstract-expressionist compositions, with painterly flourishes and exuberant brushwork. Since the images were made by a machine and not by the artist himself, however, the basic nature of abstract expressionism — in which the individual's own deep, emotional motives inspire the attack on the canvas — has been completely undermined through the mechanization. These paintings are really easy to like. 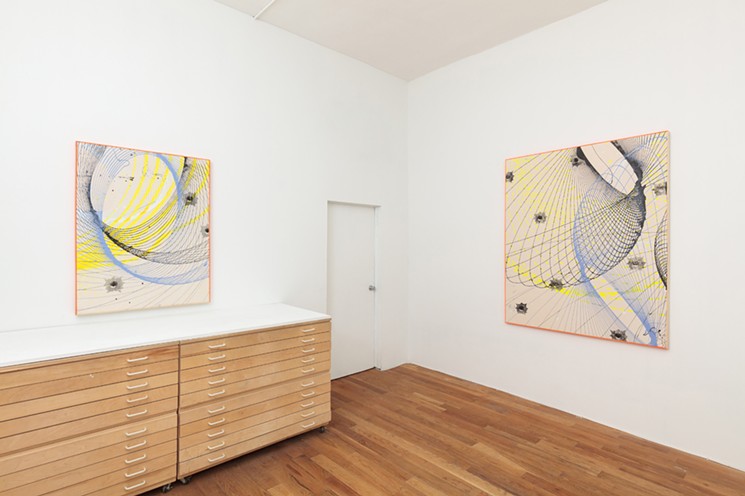 Zach Reini, “IDK 3” (left) and “IDK 2," both latex, acrylic and silkscreen on canvas.
Wes Magyar
The three monumental Reini paintings on view in the back gallery are so completely different in character from what’s up front that this section constitutes a show-within-a-show. These pieces are from Reini's “IDK” series and have a sort of ’80s vibe, both in their compositions and their palettes.

The “IDK” paintings are covered with patterns of arching webs of paint, with the patterns overlapping and intersecting each another. The webs of color have been done using a pendulum filled with paint; weighted by a pigment-filled vessel, the pendulum passed over the canvas, paint dripping down as it completed its swings. Small, medallion-like accents marks have also been scattered here and there. On closer examination, they are caricatures of the bullet-hole decals that some people put on their hot rods.

The striking Reini show runs through February 18 at Gildar Gallery, 82 South Broadway. For more information, call 303-993-4474 or go to gildargallery.com.