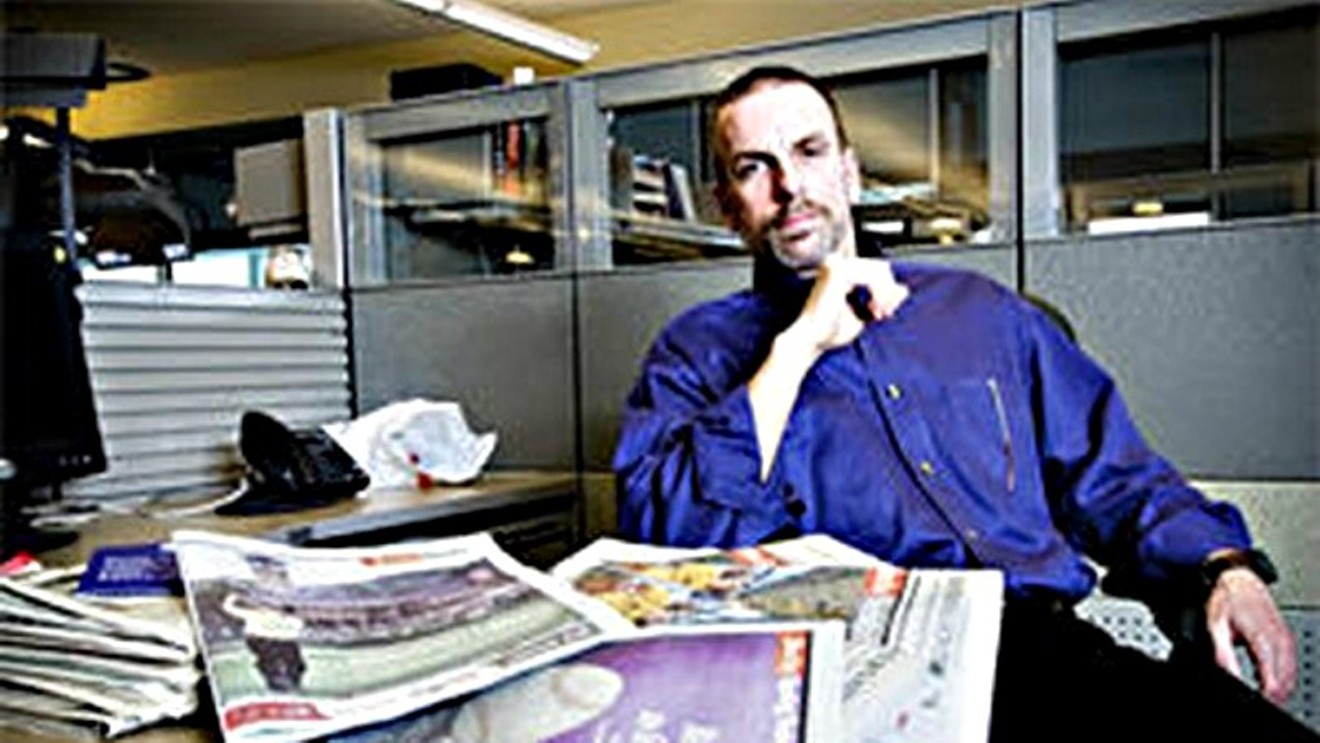 Dave Krieger during his days with the Rocky Mountain News. Photo by Tony Gallagher
Dave Krieger, a former staffer with the Rocky Mountain News, Denver Post and KOA radio, has been fired from his latest position as editorial-page editor of the Boulder Daily Camera after self-publishing an attack on Alden Global Capital, the so-called vulture hedge fund that also owns the Post, when his own paper wouldn't publish it.

Krieger announced his sacking on his Twitter page with trademark dark humor.

"Yes, I can confirm that I was fired today by @dailycamera," he noted in the first message. "Actually, the verb the publisher used was 'terminated.' As a euphemism for fired, it's actually way worse. I'd much rather be fired than terminated. Thankfully, that's what happened."

A second tweet added, "I'll have more to say about it, I'm sure, but right now I'm going to have a cocktail."

We've reached out to Krieger, and if and when he gets back to us, we'll share his thoughts in this space. But his ouster comes less than two weeks after the Daily Camera declined to print "Private Equity Owners Endanger Daily Camera’s Future" for reasons that he explained on the Boulder Free Press blog, where the piece was subsequently made available. 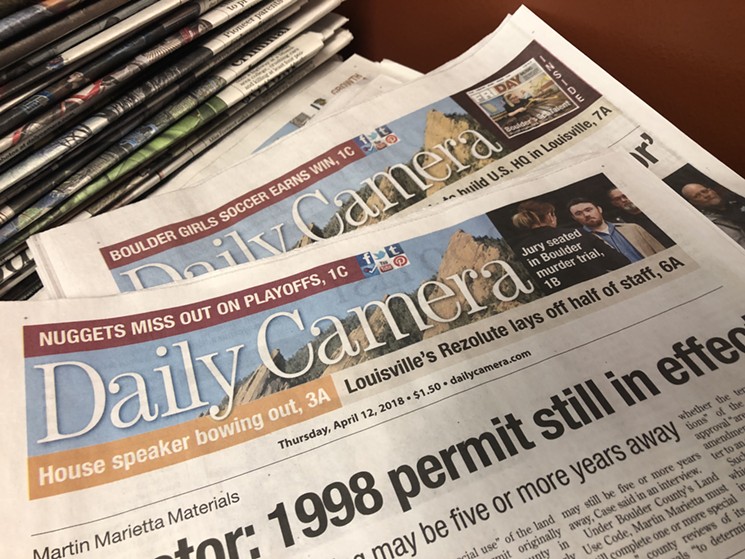 A photo of Boulder Daily Cameras that accompanied Dave Krieger's self-publication of his anti-Alden Global Capital editorial.
Boulder Free Press blog
The introduction to the piece reads: "An early draft of this editorial was submitted to the Daily Camera editorial board Friday morning, April 13, 2018, for publication on the Camera’s website Saturday, April 14, and in print Sunday, April 15. This is our usual process. Draft editorials are edited, corrected and revised during the day, but the early draft serves as the basis for approval, or not, and recommended revisions by board members. The editorial board consists of the publisher, executive editor and editorial page editor. In this case, the executive editor and editorial page editor supported publication. The publisher did not. On most matters, the editorial board operates democratically, but in this instance, the subject being the business itself, the publisher exercised his veto and killed the editorial. I elected to publish it on a different platform for the reasons stated in the editorial: This is a story about an important, longstanding Boulder institution. As journalists working in that community, we have an obligation to our readers to tell it."

Alden Global Capital has been the focus of local ire since the Post's March announcement that thirty newsroom employees would be laid off; the total corresponds to around one-third of the staff. Afterward, Chuck Plunkett, the Post's editorial-page editor, put together a package blasting Alden that actually saw print and caused a journalistic stir nationwide.

Note that the Post doesn't have a publisher right now, following the resignation of Mac Tully earlier this year. Speculation is that Tully stepped down rather than participate in such a draconian round of layoffs — and there have also been reports that Alden executives initially wanted Plunkett's scalp but backed down to avoid a bad-publicity bloodbath.

The company is receiving another one now, though. Krieger's sacking has already made headlines in papers such as the New York Times and the Washington Post. That calls for another cocktail.

Click to read the editorial that may have gotten Krieger fired.