The Controversy Over Rocky Flats Just Got Hotter A southern entrance to the Rocky Flats National Wildlife Refuge. Westword
A recent test of soil outside the former Rocky Flats Nuclear Weapons Plant, on the east side where the proposed Jefferson Parkway would complete the beltway around Denver, has come back hot.

In response to ongoing community concerns regarding construction of that parkway, the Jefferson Parkway Public Highway Authority had collected 250 samples by the site of the proposed road; no construction will be allowed without proper permitting from the state. On August 16, the JPPHA notified the Colorado Department of Public Health and Environment that a sample taken along Indiana Street, in part of the buffer zone outside the former plant, had tested at 264 pCi/g of plutonium, more than five times higher than the 50 pCi/g cleanup standard for Rocky Flats set to protect public health. Although a resample came in at 1.5 pCi/g, the state health department sent a letter to the community (available below) on August 20, noting that while the "elevated sample is anomalous," it requires investigation. In the meantime, the department says it is "awaiting further details."

When it comes to Rocky Flats, who isn't? 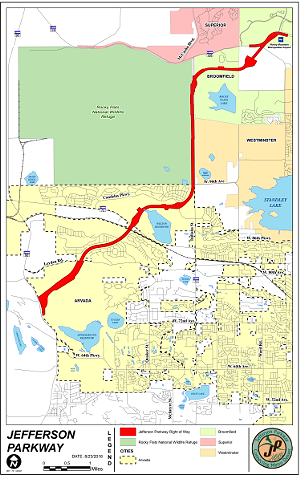 The proposed Jefferson Parkway.
Arvada.org
The Rocky Flats Nuclear Weapons Plant, which began processing plutonium triggers for the nation's nuclear arsenal in the 1950s, ceased manufacturing operations at the end of 1989, months after the Department of Energy facility was raided by FBI agents investigating alleged environmental crimes there. Evidence seized was presented to Colorado's first-ever special grand jury, convened on August 1, 1989, to consider the case.

After more than two years, the grand jurors were ready to indict eight individuals, both at DOE and Rockwell International, which ran the plant for the government. Instead, the grand jurors were sent home, and the Department of Justice sealed a deal with Rockwell in March 1992, fining the company less than it was paid in bonuses for operating the plant for a year and indemnifying individuals from prosecution.

Ever since that deal was cut, the grand jurors have been trying to tell their side of the story but have been threatened with contempt-of-court charges.

While the grand jurors waited for the gag to be removed, Rocky Flats was declared a Superfund site and became the focus of an accelerated, $7.5 billion, ten-year cleanup. When the Environmental Protection Agency determined that the remediation was complete, more than 5,200 acres were turned over to the U.S. Fish and Wildlife Service in 2007; they were to become the Rocky Flats National Wildlife Refuge. (A 1,300-acre section at the heart of the property, the Central Operable Unit where most of the manufacturing was done, remains in the hands of the DOE and is still off limits.)

Despite objections from scientists, activists and former plant workers, the refuge opened to the public in September 2018.

At the same time, development continued to push up against the very southern edge of Rocky Flats, where residents of the planned community of Candelas have their own gate into the refuge. And the JPPHA continued to push for completion of the beltway along the eastern edge of the former plant.

In January, attorney Pat Mellen filed a motion on behalf of seven organizations concerned about the quality of the Rocky Flats cleanup and the safety of the refuge, asking that documents from the grand jurors' investigation be released. Data and documentation from 1989, when the plant was still operational, might be key to determining whether all the problems from the past have been cleaned up, she argued. But in July, Mellen was told by the U.S. Attorney's Office that at least sixty boxes of grand jury documents are missing.

The JPPHA tests weren't the only ones conducted this summer. For the first time in thirteen years, sampling was done inside the facility, where more trails are planned for the refuge. The numbers on those samples just came in, with "nothing out of the norm," according to refuge manager David Lucas, who adds that Fish and Wildlife  "should have the report soon."

Until then, another wait.

What happens if more samples come back hot? According to the Rocky Flats Legacy Management Agreement, the DOE, rather than the JPPHA or the CDPHE, would take the lead in addressing any concerns.

Read the CDPHE's August 20 letter to the community here: