Jack-n-Grill Will Close on Federal Boulevard After Building Sells It's not likely you'll get a Christmas present this neatly wrapped anytime soon. Mark Antonation
What started as a mobile food cart where New Mexico native Jack Martinez sold elote and other New Mexico specialties in a parking lot at 2524 Federal Boulevard evolved into one of Denver's favorites stops for filling and flavorful Southwestern cooking. The brick-and-mortar Jack-n-Grill has been a mainstay on Federal since 2000 — but that long run will come to an end soon.

Martinez is selling the building as part of his recent divorce settlement, according to general manager Tash Rodarte, and the restaurant will close once a sale is finalized. The restaurant itself isn't for sale, Rodarte notes, so the building's next owner won't be able to re-open a restaurant there...at least not one named Jack -n Grill. It's not likely you'll get a Christmas present this neatly wrapped anytime soon.
Mark Antonation
Fans of the massive burgers, overstuffed burritos and New Mexico-style green and red chiles won't be left out in the cold, though. Martinez still runs a second Jack-n-Grill at 9310 Sheridan Boulevard in Westminster, which he'll continue to operate for at least the next two and a half years.
That's quite a journey for residents of the Jefferson Park neighborhood, who have relied on Jack-n-Grill for breakfast burritos, margaritas and Denver Broncos game-day meals for the better part of two decades. But it will definitely be worth the drive for those looking for a challenge — the seven-pound burrito challenge, to be exact.

The hefty special rose to celebrity status after Adam Richman of the Travel Channel's Man v. Food came to Denver in 2009 and was sent away defeated by the newborn-sized burrito. Many others have tried to eat it, and some have even succeeded; their pictures are on the wall of the tiny dining room, along with framed news stories and awards that the restaurant has earned over the years. 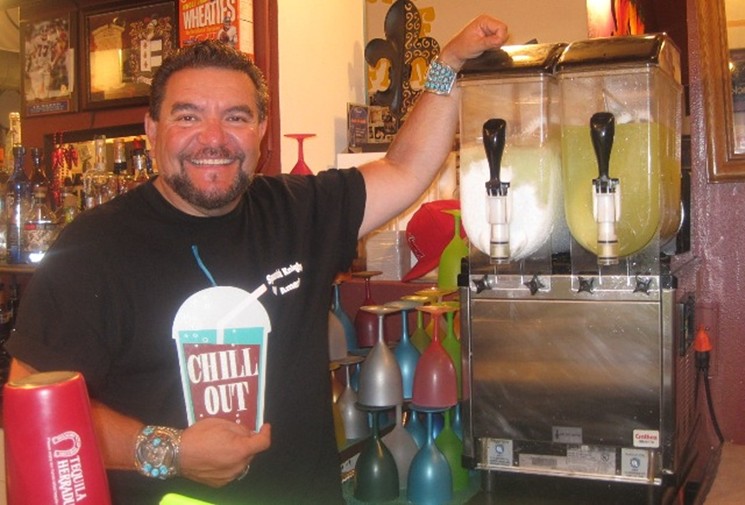 Jack Martinez at his bar and restaurant in 2010 — seems like just yesterday.
Westword
Jack-n-Grill forms one corner of a legendary breakfast-burrito triangle, along with Araujo's and Santiago's, giving morning burrito seekers a trio of great options at even better prices; in 2010, the stretch between 25th and 26th became our best breakfast burrito neighborhood in Denver. Martinez also opened a Littleton branch of his restaurant in 2009, but that location closed earlier this year.

Hatch green chile and Chimayo red chile both have their advocates, and Jack-n-Grill was one of the few places in town where you could get them both on the same plate. But that Christmas party will soon end, at least on Federal Boulevard.