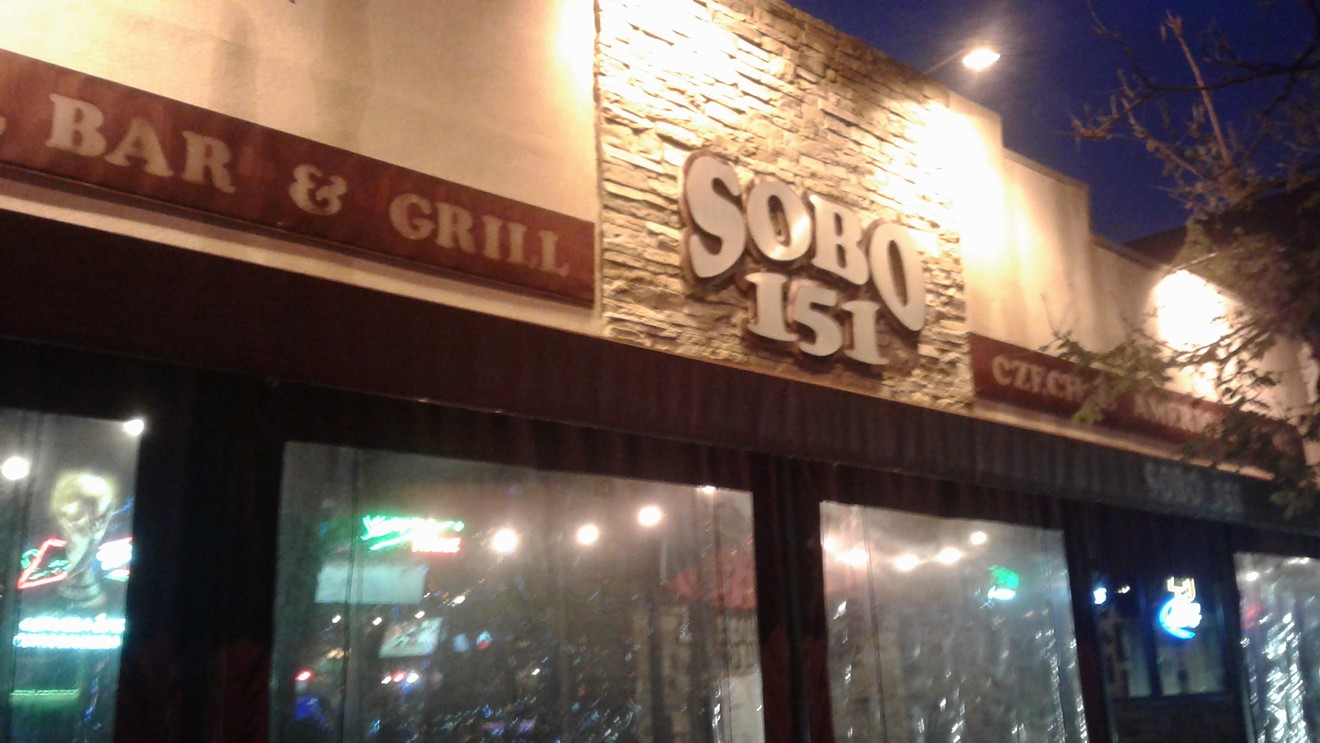 SoBo 151 is easy to find at 151 South Broadway in the Baker neighborhood. Sarah McGill
SoBo 151, at 151 South Broadway, is one of my longstanding favorites in Baker; it's an unpretentious and welcoming bar with a varied crowd and not one, but three excellent karaoke nights. Tasty Czech and American bar food — with bratwurst, goulash and schnitzel sharing the menu alongside wings, burgers and nachos — make the place as much of a restaurant as a bar. SoBo also serves brunch, which I've never had, but the menu options look promising. The drinks list is also more interesting than that of your average Denver bar, with various Czech and other European beers and liquors. I like the Czechvar beer or a shot of Becherovka, a Czech herbal liqueur that many at SoBo's refer to as the "Christmas shot" because it tastes like a delicious, boozy Christmas tree.

I have spent many a karaoke night at SoBo's, and was there recently on a Saturday night trying out new songs and also doing "Holding Out for a Hero" by Bonnie Tyler, one of my standbys on the karaoke mic. The karaoke crowd, and bar crowd in general, tends to be a mix of twenty- and thirty-somethings, with a few older gentlemen in the mix to guarantee that Frank Sinatra and bands like Deep Purple and Yes don't get forgotten. I once saw a group of bearded guys dressed in strikingly similar flannel shirts at the bar, but not because they were doing a lumberjack bar crawl — they were just dressed that way. To round things out at SoBo 151, you can often find a few older punk rockers, assorted hipsters and European soccer fans, often wearing jerseys of their favorite football clubs. This night was no different; the karaoke singers and spectators got things going while the primarily male pool sharks kept themselves busy in the back room at the pool tables. Some couples and small groups sat outside on the patio, so inside it wasn't too packed.

Karaoke night is a must at SoBo 151, and luckily there are three, on Thursday, Saturday and Sunday!
Sarah McGill
SoBo 151 is near the southernmost end of the Baker nightlife district, and used to be nearly the last watering hole before Alameda Avenue, especially when it opened almost fifteen years ago. But no longer: With the insane amount of bars and restaurants that have popped up over the last three years nearby, SoBo's is in good company. Owner Filip Stibral lives in the neighborhood and is a decidedly "old Denver" sort of dude, meaning that he's been here since before the most recent population explosion — and then some. When I met him at the bar on a Friday afternoon, our conversation ranged from his friendship with the late Gary Lee Bomar of Gary Lee's Motor Club and Grub, to his occasional goth DJ sets at Rock Island back in the day, to his tattoo of Denver Health honoring the fine folks there who saved his life when a glass broke in his hand and he had to go to the emergency room. Like I said — old Denver. He and his family are Czech, and came to the U.S. in the 1980s, so he can't quite claim Denver native status. His mother, Denna Stuart, owned the divey Groggery Lounge, now Bowman's Vinyl and Lounge, for several years, starting in 2005. Stibral helped out there, and discovered the wonders of South Broadway before it became the destination it is today. He never could seem to get out of the bar industry, and likes to say that he's using his degree in international business to run an international bar in Denver.

After being in the business for a while, when Stibral opened his own place, he took over a building with an interesting history. It was originally built as a livery, but over the years was a bar called Clifford's and then a sketchy Mexican restaurant called the Red Shanty up until 2001, when Stibral started gutting the place to build his bar. During the process, he learned a lot about the previous adventures of the building. The Red Shanty used to serve free menudo, and people would still come in looking for food throughout the construction — and for years after SoBo 151 opened. Police officers have filled him in on such fun facts as the exact locations of shootings and stabbings — not to mention the story of the time someone blocked the back door and set the place on fire, attempting to burn the previous owner alive. (Apparently, everyone escaped.) Car chases, people dumping cars — you name it, it happened. Since Stibral opened his bar, a guy stole a Red Wings jersey off the ceiling of the bar and tried to run away, only to be caught by the bar owner and his friend, a deputy sheriff who just happened to be having a drink at the bar that day.

Stibral also found interesting items during the renovations, like a print of Marilyn Monroe, and barbed wire in the old duct system to booby-trap any people trying to come in through the air ducts, probably from the Clifford's days. When the bar was Clifford's, there was a bowling alley next door, and according to an old promotional matchbook Stibral has, it catered to "workmen, bowlers and sportsmen." The ghosts of the past don't seem to haunt the staff, but a few customers have said they feel fingers on the back of their necks when sitting at a table in the left corner of the bar, an area that also doubles as the karaoke stage. Maybe ghosts like karaoke. I mean, who doesn't?

Stibral actually resisted the idea of karaoke at first, but soon decided to give the people what they wanted, and starting with one karaoke night, then adding a second and a third; Thursdays, Saturdays and Sundays are for singing at SoBo 151. Tuesday is trivia night, and Wednesday's feature is late-night happy hour, from 10 p.m. to 2 a.m. Regular happy hour on weeknights is from 3 to 6 p.m.

When there's no "Watch Your Step" sign available, "Beware of the Dog" is the next best thing.
Sarah McGill
A few times a year, the team at SoBo 151 hosts charity events for causes like Hockey Fights Cancer. There's also live music occasionally, usually in the form of a Czech band. Sometimes these shows are a celebration of someone's birthday, such as Stibral or longtime bartender Petr Dunnaj, whom Stibral initially hired as a doorman because Dunnaj spoke Czech. During Dunnaj's first night on the job for a Czech music show, the original bartender for the event claimed he had trouble understanding the Czech customers, so Stibral replaced him with Dunnaj. That was the start of Dunnaj's career at SoBo 151, and fifteen years later, he's still behind the bar, slinging beers and Becherovka shots.

The bar's fifteenth-anniversary celebration, featuring the Fabulous Boogienauts — a Denver space-themed disco band that had a recent gig at Denver Comic Con — is coming up on August 18, so it should be a particularly good night to come boogie with the crew at SoBo 151. But on any given day, SoBo 151 is a good spot to meet open, friendly people over beers. Whenever I go there on a night that's not dominated by awesome karaoke jams, it's easy to strike up a conversation on any topic with the folks at the bar or just chat with some friends in a relaxed environment. So whether you want to try Czech food, meet a ghost, sing karaoke, or taste the meaning of Christmas in the form of a shot, you can accomplish all of those goals at SoBo 151, maybe all at the same time.