Breckenridge Ski Resort
One of the things that Breckenridge Ski Resort is best known for is its wide expanse of high alpine terrain — all that pure white mountaintop space that rises above treeline and offers talented skiers and snowboarders the ability to take lines down steep chutes, bowls and drops, off windswept cornices.

But though contemporary riders may take all that high alpine space for granted as part of the Breck experience, the terrain wasn’t always open to the public. In fact, it took decades of daredevil skiers and experienced engineers and avalanche management teams exploring and safely developing the high alpine sections of Breckenridge so that we can enjoy them in-bounds with a lift ticket today. In order to tell that story — including how Breckenridge engineered the Imperial Express SuperChair, which rises to 12,840 feet in elevation, making it the tallest chairlift in North America — Breckenridge Ski Resort partnered with a Denver-based production company, Garlic Media Group, to produce a 26-minute documentary, “Above Treeline: The Story of Breck’s High Alpine.”

Released November 8, the film is available to view online for free [see it in its entirety above]. Recently, Westword spoke with the director, Justin LePera, to find out more about how the film team put together the documentary, tracked down skiing legends and archival footage, and more.

Westword: Can you tell us about the vision for this documentary and how it came together?

Justin LePera: We [Garlic Media Group] had worked with Tracy O'Brien, the brand manager for Breckenridge, in the past, and she knew I've done a ton of documentaries, usually in the surfing genre. She wanted to come up with a way to really paint a picture of the high alpine region of Breckenridge, because Breckenridge has always been known as kind of a beginner mountain since there's a lot of really easy terrain. But that seems to overlook just how crazy and expansive the high alpine is, as well as what Breckenridge has been able to accomplish in providing that for guests.

So we started discussing how we could tell the story of the high alpine so that people are aware of it but also understand the work that went into making it what it is, because if you've grown up in Colorado and grown up skiing here — like myself — you can remember when the high alpine wasn't available. You had to hike to it, and you weren't technically allowed. You were breaking the rules to go up there.

We decided that the most organic and fun way to [tell the story] would be through a documentary, telling the story through the people who made it happen. The fact that these guys in the past were just launching themselves over cornices and into the unknown, then laughing while telling stories about it later, it was cool to have the opportunity to find those ski legends — and also the people who worked for Breckenridge — who had the vision that they could make the high alpine accessible for the general public. 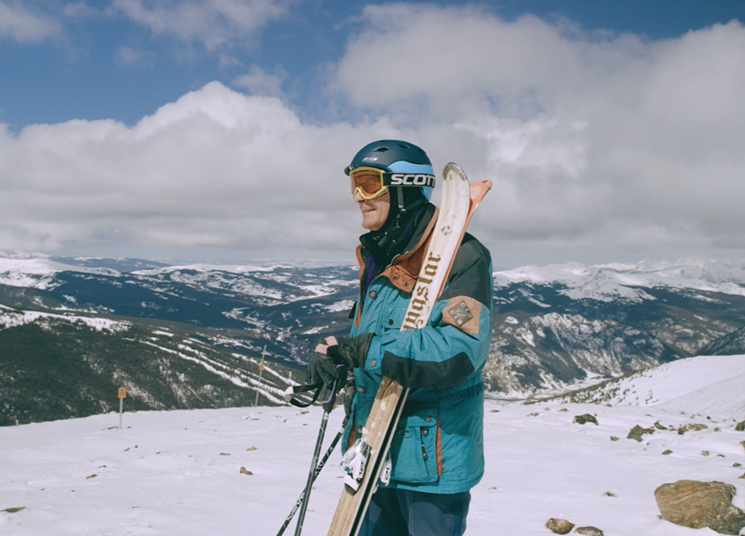 C.J. Mueller, a Breck ski legend, is now in his seventies and still skis the mountain almost every day.
Breckenridge Ski Resort
Who were some of your favorite ski legends to track down and talk to for this film?

We interviewed a lot of people. C.J. Mueller definitely stood out. For him, he gets emotional even thinking about the views up in the high alpine. You can tell that he's lived and breathed this mountain since he was in his twenties. And back in the day, he was known as Crazy John. He skied up to 130 miles per hour or something crazy on skis — the fastest man on skis at one point.

When I interviewed him, I thought, “This is what the high alpine is all about,” because he's still someone who goes every day. He's in his ’70s now and is the epitome of everything about the high alpine. I think he speaks for a lot of the legends around Colorado in these different ski towns, because there are lot of people like him.

You said you’ve done surfing films. I was wondering if you had a background in skiing and snowboarding films or, if not, if you'd taken any inspiration from the classics like Warren Miller movies to figure out tricks and methods for your cinematography.

I've done ski advertisements, which is similar in the sense that you take professional skiers and snowboarders up to places like Breck and get epic shots. But, yeah, I started out with surf films and then got into doing more sports television. I grew up watching Warren Miller films and TGR films, so those are definitely two groups that inspire different ideas and ways to approach filming a specific scene.

Capturing skiing is really similar to surfing in terms of how important the cinematography is. There's two things you have to focus on. Obviously, you're trying to create these beautiful images, but you also have to find a way to have these impactful scenes that strap the viewer into the experience so we feel like we're part of the ride and are skiing or snowboarding along. And in this piece, the mountain was a character as opposed to the skiers. So our approach was shooting the mountain in a way that really highlighted it, more so than the people who were on it. So it was showcasing the mountain's capabilities and things you can do on it, and leaving it up to the viewer's imagination as to all the options on the high alpine. We would have anywhere from three to five camera operators plus a drone operator. The drone was really good for getting those epic and wide shots — really giving the mountain a hero-type shot. And then when it came to filming, we took a wide approach as to how we shot different lines. We didn't focus, like some films, on getting a specific move or trick in a specific area and then move on to the next turn or jump. We knew that we really needed to capture those full lines rather than one amazing trick that someone is going to do within that line. So it was almost like live-covering a football game, where you want to make sure that every camera was capturing different perspectives but the whole action was completely captured.

When was this filmed? Was it last season?

Yeah. So it wasn't the most ideal season….

Right. Last season's snow coverage sucked! Did you have to wait until days with decent coverage to do some of your shooting?

We tried to. But we shot toward the end of the season, and all of that was pretty much filmed in March [2018]. Normally, you block off a lot of time on your calendar and wait for conditions to be really good. We didn't get that luxury. So that was a challenge. And we got to a point where only a couple guys would take some lines because it was really dangerous and not ideal conditions. 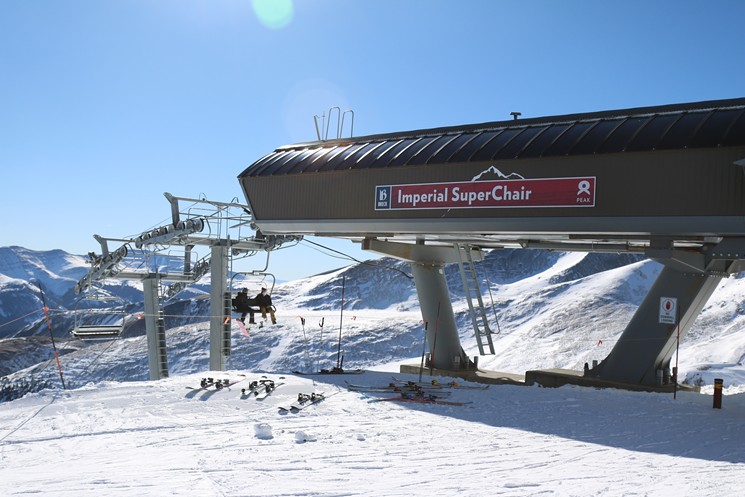 The Imperial SuperChair is the tallest chair lift in North America.
Breckenridge Ski Resort
The film features some fun historical footage, especially some of those looks and onesie outfits in the 1970s and 1980s. Was that a challenge, tracking down all that old film?

Luckily, Breckenridge helped us there. And C.J.Mueller filmed a good amount, so 80 percent of that was what C.J. and his buddies filmed back in the day. They would take a 16mm camera and they would goof around with it. The hard part was that our editor had to go through all that footage to figure out what matched with the stories he was talking about.

The film refers to a fatal avalanche in 1987. But I noticed that you didn't say how many people died in that avalanche [it was four people]. Was your employer, Breckenridge Ski Resort, worried that focusing too much on that avalanche would scare people off from accessing the high alpine?

I came in saying that this avalanche is a huge part of the story because it was a catalyst where the mountain management realized that they needed to develop the whole area, not just part of it, because people were going to keep hiking up and doing dangerous traverses. I was pleased that I could address the avalanche, and they were open to telling that story.

Breck was concerned that some might think the high alpine is too dangerous, but what was cool was that they wanted to make sure we were able to tell the right story and not hide or glamorize anything.

Breckenridge Ski Resort
Well, and some of that danger is counterbalanced by the fact you went into all the avalanche management strategies used by ski patrol — like how they place explosive charges.

That's probably my favorite part of the whole movie: how we got to cover what they go through. It ended up that we had to capture them doing their thing on a pretty windy day, so we got to capture them in their full-on element of what it takes when there's sixty-mile-an-hour gusts at the top. That footage of them setting up the explosives and walking across the ridgeline, that's what really does go into this.

What are the future plans for the film? It's posted on Breckenridge's website. But will it be screened anywhere else?

They showcased it on Opening Day. Now our company will enter it in the short-documentary or branded-content categories of certain film festivals. So we'll try to tour it and get it out there around the country.
KEEP WESTWORD FREE... Since we started Westword, it has been defined as the free, independent voice of Denver, and we'd like to keep it that way. With local media under siege, it's more important than ever for us to rally support behind funding our local journalism. You can help by participating in our "I Support" program, allowing us to keep offering readers access to our incisive coverage of local news, food and culture with no paywalls.
Make a one-time donation today for as little as $1.