Alicia Cardenas Honored With Mural by Some of Denver's Best The mural of Alicia Cardenas was painted during Art RiNo. Joe Freedmon Photography via Art RiNo
Many walls were painted during the Art RiNo mural festival in early September, but one in particular stands out: the beaming face of Alicia Cardenas among marigolds and monarch butterflies on a sprawling wall at 27th and Larimer streets, right next to a mural painted by Cardenas herself.

Cardenas was killed last December in a series of shootings that began at her tattoo shop, Sol Tribe, on Broadway, and ended at Belmar in Lakewood. Five people, including the shooter, were killed.

An activist, tattoo artist, piercer and muralist, Cardenas was a champion of Indigenous and Chicanx rights, and an inspiration to any who knew her. That's why artists Jodie Herrera, Jaime Molina and Jher came together to collaborate on a mural honoring her: Each had known Cardenas, and they wanted to use their respective skills to bring the painting to life.

Molina was willing to help in any capacity he could. "I grew up here in Denver. I used to see Jher's graffiti, probably about the same time as I met Alicia, in the mid- to late ’90s. I got a piercing from Alicia when I was seventeen," he says. "After Alicia pierced my nose, I'd see her around, but I didn't really know her, so I didn't talk to her. And then when she started doing murals, we started to kind of connect. Our paths had crossed, and we'd chat at different festivals or different art events. I would see her and it was always just all love with her. She was always so full of praise, and it was always nice to see her. She was just full of light. I wasn't like as close to her as Jher or maybe even Jodie, but it was an honor to be able to contribute to this tribute. It was also, for me, an amazing thing to get to paint with Jodie. I've admired her work, and Jher's especially, because I've been a fan of his for so long. So it was such a cool moment to collaborate on something together, especially for something like this." 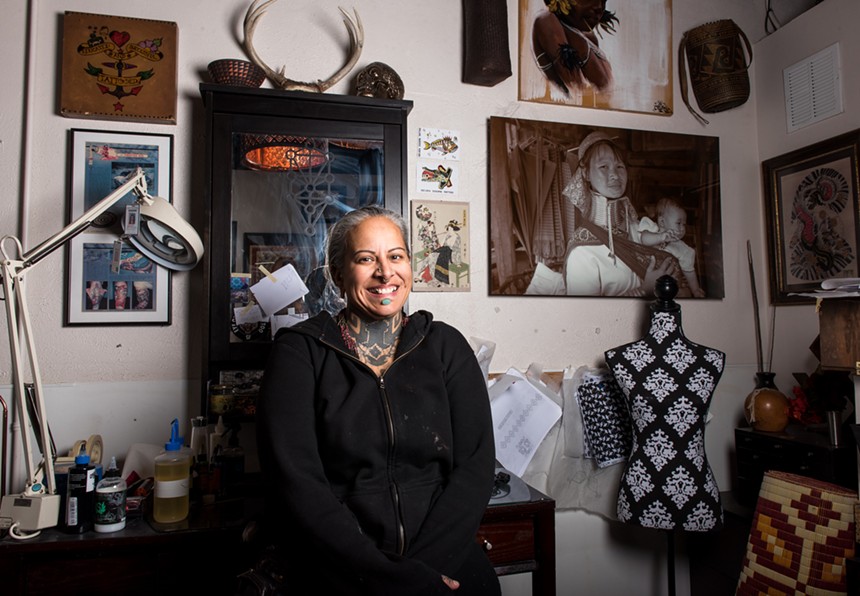 Alicia Cardenas was killed on December 27, 2021.
Jake Cox
Jher and Cardenas had known each other since ’97, when Jher was a nascent muralist and Cardenas was just opening her first tattoo shop, Twisted Sol. He recalls how the shop approached him to paint a mural, which he did, and then he was offered an apprenticeship there. "And that's how I met Alicia," he says. "It was not through her so much, but through her partner, Big Mike. But then...I worked with her for nine years."

While they often butted heads — "I'm a Taurus, she's an Aries," he explains — they got along for most of that time. But after he quit Twisted Sol, he and Cardenas lost touch. "And then she started getting into painting murals," Jher says. "She approached me about teaching her...and gave me a whole new level of respect. She got close to my daughter and watched my daughter for me sometimes, a lot of cool stuff like that. We were really close. And then once she got into painting murals, we got a lot closer, we painted murals together. We would go have lunch occasionally. We just had a really good connection."

Jher met Herrera during the 2019 RiNo Arts Fest, and started collaborating with her on murals. "She knew that I was really close to Alicia, and so when Alicia got killed, she actually asked me about painting a tribute to her. I was like, 'Yes, of course,'" Jher recalls. "And I've always loved [Molina's] work; the first time I met him, he said he always looked up to me, too. So I wanted to work with both of these people for a long time."

Herrera used her photorealism skills to paint the portrait of Cardenas for the mural. Jher added the monarchs and flowers. "My concept with the marigolds obviously was through Mexican tradition. When someone dies, they put the flowers in their house, and that way the soul can find its way back home," Jher explains. "The monarchs are a part of that culture, too, because they fly from Mexico to America, then back in the course of their life."

Molina created details from Cardenas's past murals, and used his signature abstract lettering to spell the single word describing her: "matriarch." Coming up with the right word was a challenge, he says: "How do you capture someone's spirit in a word? Nothing felt right until the last minute, when Jodie, actually, threw out that word 'matriarch,' which is so fitting for her. She was so many things to so many different people, and I feel like to everybody, she was a mom or older sister who was watching over people and kind of checking people or calling people out and [bringing] order to things. So that word just really resonated, and I think it worked really well.

"And then for the stuff on the background above the word, I was just trying to use some symbols," he continues. "I picked some of those directly from her murals that she'd done in the past, and then others that are symbols that I felt fit with her work, that were very connected to Indigenous culture."

Molina says he thought a lot about what Cardenas would think of the mural while he was painting it. When she began painting murals, she would ask him for advice — and that would make him laugh, because she already was showing so much talent.

"When I was thinking about her and what she would think of it, it kind of made me happy, because I felt like she'd be really excited that people were doing that for her, especially somebody like Jher, who I know she was super-close with, and Jodie, this younger Latina. I don't know, but I hope that she's happy with it," he says.

Jher arrived to paint his portion after Herrera had already painted most of the face. "It was really difficult at first, just looking at a big picture of her, you know?" he says. "Just seeing her — and we were so close. And she was somebody I looked up to for so long. She's not ever going to be dead to me, you know what I mean? She's such a big part of my consciousness that, a lot of things I do, I see her like, looking over my shoulder and  telling me to do it a certain way, or don't do that."

And how would she feel about the finished piece? "Uh, she'd probably hate it," Jher jokes. "No, she wouldn't, but between me and her, she'd probably pick apart the things I did, like, 'You could have spent more time on the flowers,' or something like that."

But after a tearful pause, he retracts that: "She would've really liked it."
KEEP WESTWORD FREE... Since we started Westword, it has been defined as the free, independent voice of Denver, and we'd like to keep it that way. With local media under siege, it's more important than ever for us to rally support behind funding our local journalism. You can help by participating in our "I Support" program, allowing us to keep offering readers access to our incisive coverage of local news, food and culture with no paywalls.
Make a one-time donation today for as little as $1.
Emily Ferguson is Westword's Culture Editor, covering Denver's flourishing arts and music scene. Before landing this position, she worked as an editor at local and national political publications and held some odd jobs suited to her odd personality, including selling grilled cheese sandwiches at music festivals and performing with fire. Emily also writes on the arts for the Wall Street Journal and is an oil painter in her free time.
Contact: Emily Ferguson