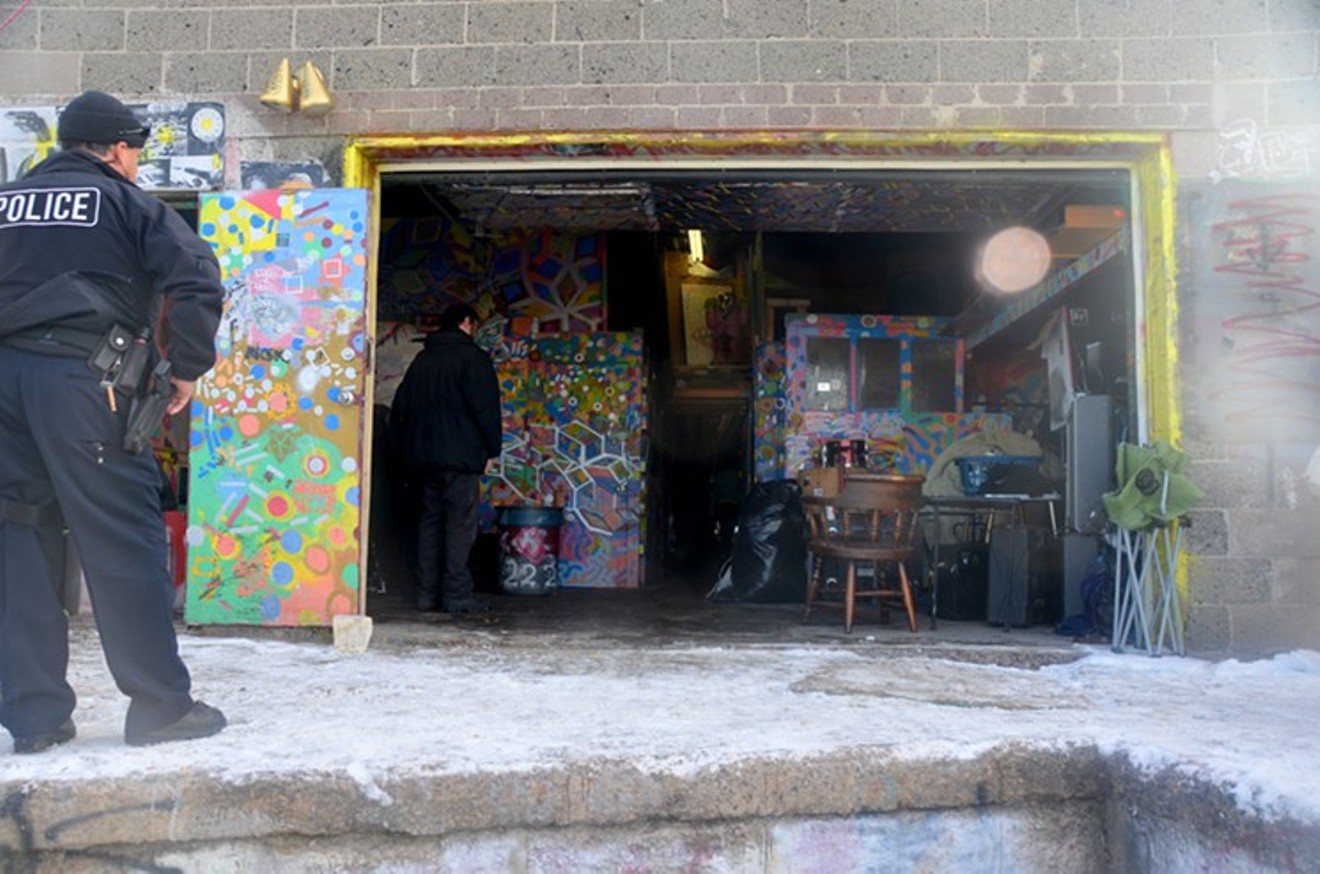 Tenants move their things out of the DIY space Rhinoceropolis at 12:05 p.m. on December 9. Lindsey Bartlett

After the Denver Fire Department shut down Rhinoceropolis and Glob, two underground music and arts venues, not long after Oakland's Ghost Ship fire that killed 36, Denver's DIY arts scene went dark. Venues shuttered their social-media profiles. Artists refused to speak to the press. Shows were canceled as organizers scrambled to navigate hundreds of pages of zoning code and ensure that their spaces were not just safe, but code-compliant.

On Tuesday, January 10, the DIY scene is coming out of its shell. Amplify Arts Denver, a new group of arts activists, will host a town-hall forum to share goals with the public and try to understand the needs and concerns of the DIY community.

"I know a lot of spaces have taken down their social-media presence and are going back to fliers and word of mouth," says Westword MasterMind Sarah Slater, founder of the Titwrench music festival and a member of Amplify Arts Denver. "There's a bit of fear about surveillance and things like that, and reluctance to talk to the media. That's one reason we've formed this group, so that we can have more of a voice in the media that's out there."

Slater says the group aims to secure more permanent DIY arts venues, provide resources to the DIY community and, most urgently, help Rhinoceropolis and Glob reopen. Slater hopes the latter will happen within the month.

Amplify Arts Denver is working with the River North Art District as well as Denver Arts & Venues to improve city policy for DIY artists. She says Denver has plenty of room to improve when it comes to creating transparent policies and spelling out zoning codes.

"We're still trying to work toward more accountability and a more transparent relationship with the fire department," Slater says.

While Amplify Arts Denver organizers want spaces to be safe, they don't want the city to overreact.

"There's not enough of an understanding from the general culture about what DIY culture is about and why people want to operate in spaces that are not sanctioned or not commercial," she says. "There just need to be more voices from the actual people who live in those communities and participate in them."

At this town hall, Amplify Arts Denver will announce plans to improve conditions in Denver for DIY groups. What those will be, Slater will not say.

Amplify Arts Denver plans to host another town hall in March, addressing other issues including housing affordability, renters' rights, development, homelessness and how those issues intersect with the DIY community.

Slater and the other organizers are grateful for the support the community has shown in the wake of the evictions. One crowdfunding campaign, hosted on generosity.com, has raised $3,860 of a $10,000 goal; the campaign winds down Wednesday, and all funds will go to the residents evicted from Glob and Rhinoceropolis.

Westword has granted Rhinoceropolis and Glob an emergency $2,000 MasterMind Award that the venue organizers can spend as they choose.

The free town hall takes place from 6:30 to 8 p.m. on Tuesday, January 10, at RedLine Contemporary Art Center, 2350 Arapahoe Street. (There will be free Sexy Pizza for attendees.) For more information, go to the event's Facebook page or Amplify Arts Denver's website.