Whether you visit a gallery to do some holiday shopping or simply for the plain delight of seeing fabulous work, these suggestions will get you on the right path: Kim Dickey, “View From the Edge of the Field” (detail).
Courtesy of the artist
45+, Robischon Gallery’s 45th Anniversary Celebration Exhibition
Robischon Gallery, 1740 Wazee Street
Thursday, November 17, through January 22
Opening Reception: Thursday, November 17, 6 to 8 p.m.
One of Denver’s oldest commercial galleries and a jewel box of visionary curation, Robischon Gallery first opened in 1976 and has since weathered economic recessions, the rapid development of LoDo and even a full-blown pandemic. Now, owners Jim Robischon and Jennifer Doran are ready to celebrate its remarkable 45-year history with a stable of artists of national and international recognition in a two-part display of new and archived museum-quality works. Astonishing things will greet your eyeballs on Thursday night, then look for part two in January, with a whole different roster of art-world stars.

Nathan Abels, "Ursa Major Reimagined."
Nathan Abels, Rule Gallery
Nathan Abels, Dreams
Rule Gallery, 801 Santa Fe Drive
Friday, November 18, through December 31
Opening Reception: Friday, November 18, 6 to 8 p.m.
Nathan Abels paints images that feel like they’ve been captured on film, but with a supernatural oomph that illustrates the mysteries of the universe from a sensitive and personal point of view. An incident from Abels’s childhood concerning a woolly mammoth skeleton found during the excavation of a new housing development is the thread that runs though Dreams, combined with new thoughts brought on by the threat of climate change and the slow destruction of Earth as we know it. Abels asks: “Can we undo climate change by resurrecting extinct plants and animals? Can bio-tech and geo-engineering negate the detrimental effects we’ve had on the natural world?” See the show at the Friday opening and through the end of the year.

See new works by Angie Piehl and others at Walker Fine Art.
Angie Piehl, Walker Fine Art
Fractional Confluence
Walker Fine Art, 300 West 11th Avenue,
Friday, November 18, through January 14
Opening Reception: Friday, November 18, 6 to 8 p.m.
WFA’s new group show concentrates on artists whose practices combine numerous components of technique and materials in a single work, by incorporating both 2-D and 3-D effects, as well as collage, mark-making, painting, repurposing materials and more. Tonia Bonnell, Doug Haeussner, Rob Mellor, Christopher Nelson, Angie Piehl and Chris Warren accomplish this, each in his or her own way, resulting in a show of works that might seem simple at first notice, but reveal a complicated mixed-media base.

Paule Keefe, "Collective False Memory," 2022, colored pencil on paper.
Paul Keefe
Paul Keefe, Bologna Hell and Lettuce Heaven
Lane Meyer Projects, 2528 Walnut Street
Friday, November 18, through January 14
Opening Reception: Friday, November 18, 8 p.m. until late
Pure baloney or perfectly sensible? You’ll have to make up your own mind about Paul Keefe’s video and colored-pencil drawing exhibition Bologna Hell, opening this week at Lane Mayer Projects. But either way, it’s a delightful conceptual conundrum evaluating the passage of time and the reality within it, in conjunction with the Mandela Effect, the Bologna Centrale Station clock, The Berenstain Bears and levitating peanuts. To further confuse viewers, the concurrent show, Lettuce Heaven, might have a whole different set of answers; learn more at a second reception on November 30.

Adrienne DeLoe, "Fish Skull," macro photography.
Adrienne DeLoe
Adrienne DeLoe, Small Wonders
Heidi Calega, Animalia
Next Gallery, 40 West Hub, 6501 West Colfax Avenue
Friday, November 18, through December 4
Opening Reception: Friday, November 18, 6 to 10 p.m.
Artist Adrienne DeLoe, who’s already gained popularity for her assemblages of insect bodies embellished with other natural adornments, focused on macro photography for her new member show at the Next Gallery co-op. DeLoe homes in on the delicate structures of bones, seed pods, mold, barnacles and other textures from nature for Small Wonders, a show that will let you see the natural world in a whole new way. Heidi Calega, who views the natural world as the daughter of a biologist, pitches in with her own show of elaborately beaded, repurposed and embellished animal portraits.

The Outsider Show
Manda Remmen, Veneration
Pirate: Contemporary Art, 7130 West 16th Avenue. Lakewood
Friday, November 18, through December 11
Opening Reception: Friday, November 18, 6 to 10 p.m.
You never know what you’re going to get at Pirate’s time-honored annual Outsider Show, an open-call show for artists of every age group and skill level. At this very moment, folks are installing a topsy-turvy collection of affordable art for the exhibition, which will set the stage for a Pirate members' group show in mid-December to end the year.

A.L. Lummus, "Issue #37 - A Study of the US Supreme Court found that women are interrupted three times as often as their male colleagues. It was worse for the woman of color."
A.L. Lummus
A.L. Lummus, Mettle Martyr II
Bitfactory Gallery, 851 Santa Fe Drive
Friday, November 18, through December 8
Opening Reception: Friday, November 18, 6 to 9 p.m.
Artist and activist A.L. Lummus continues her Mettle Martyr series of female portraits that raise awareness of gender inequality and discrimination while showing strong portrayals of women fighting back. Lummus is contributing a portion of every sale to the advocacy group PorchLight Family Justice Center, and Porchlight representatives will be on site to discuss their support programs. 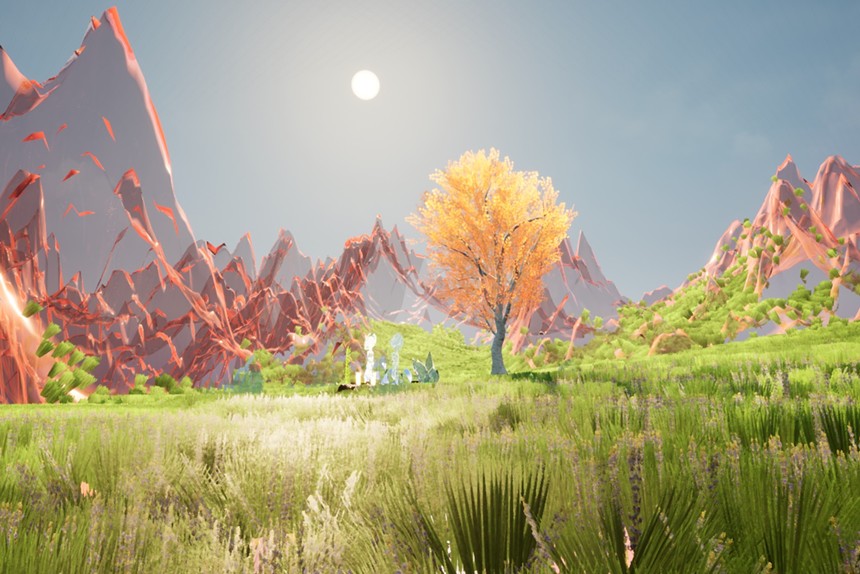 Cherish Marquez, “Rio Verde.”
Cherish Marquez
Cherish Marquez, Topographic Memory
BMoCA at Anythink Bennett, 495 7th Street, Bennett
Saturday, November 19, through December 31
Unveiling Reception: Saturday, November 19, noon to 2 p.m.
Cherish Marquez has been leading community groups in creating a collaborative work, Topographic Memory, through workshops hosted at the Anythink Bennett library as part of the Boulder Museum of Contemporary Arts’s off-site exhibition program. Now the finished work is ready to be unveiled to the public at a reception on November 19. Marquez, who frequently works digitally, facilitated the building of an interactive topographic map of Bennett and exploratory video game involving an IRL cloth with conductive material to create an installation with a digital interface. Play the game beginning at noon on November 19. 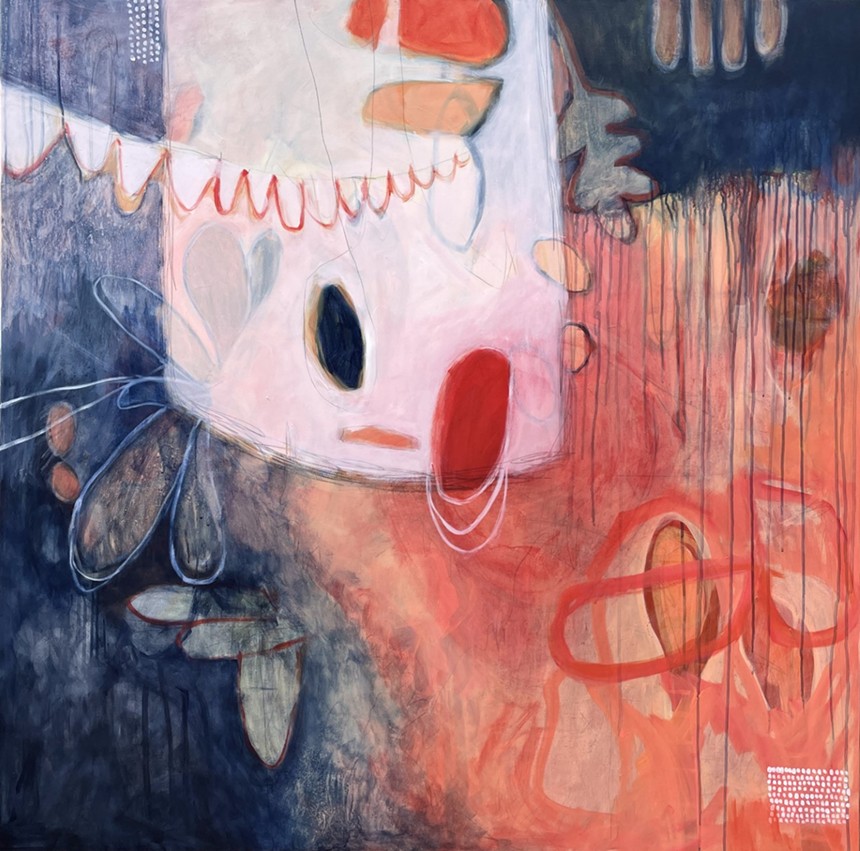 Alissa Davies, “It Started as a Whisper,” acrylic mixed on canvas.
Alissa Davies
Sometimes I Think It's a Painting
Blue Tile Gallery, 3944 South Broadway, Englewood
Saturday, November 19, through December 16
Opening Reception: Saturday, November 19, 5 to 9 p.m.
Closing Reception: Thursday, December 15, 5 to 9 p.m.
Boulder artists Alli Gerrish, Jane Oniki, Allisa Davies, Tracey Russell and Courtney Cotton met during workshops at Anderson Ranch in Snowmass, discovering that they not only shared art sensibilities, but also lived in proximity. Sometimes I Think It's a Painting is the end product. Blue Tile is open 10 a.m. to 4 p.m. Tuesdays through Saturdays or by appointment (call 720-289-9323).