Art Attack: All the Shows You Need to See This Weekend

Cody Kuehl, “Missfire,” acrylic on carved wood panel, at Valkarie Gallery. Cody Kuehl
This weekend, see new co-op shows in Lakewood, as well as summer exhibitions at Robischon Gallery and BMoCA. You can also check your interpretations at the door at Leon Gallery’s S. Legg solo and pay tribute to some of Colorado’s great figures in art history.

And, of course, there's always more. 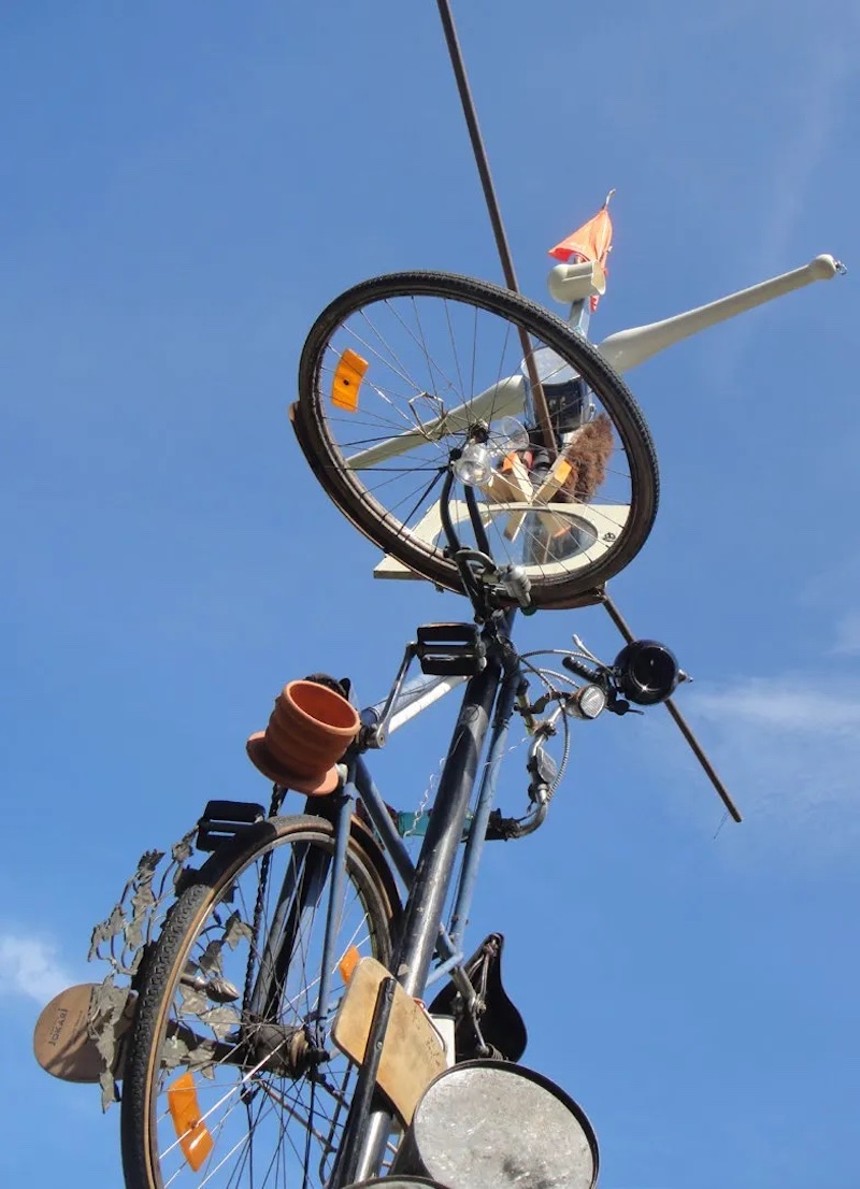 Gabriel Rico Jiménez, “Coup de Ville” (detail), 2013.
© Gabriel Rico Jiménez
Public Art Participation at Tail Tracks Plaza
Online Information Session: Wednesday, June 22, 12:30 p.m.
Register in advance at Zoom link
Black Cube and the Biennial of the Americas are calling on the public to help Mexican artist Gabriel Rico create the community installation “La inclusión de mi raza” by donating objects reflecting our city’s identity. Rico will use the items to build a series of found-object totems to debut in September at Tail Tracks Plaza, on 16th Street between Wewatta and Wynkoop streets. Join Rico on Zoom Wednesday to learn more about the project, which is part of the Biennial’s overarching Edge Effect art project, driven by the idea of human intersection within the larger community. Learn more here.

Cody Kuehl, Freefall
Valkarie Gallery, 445 South Saulsbury Street, Belmar, Lakewood
Through July 17
Opening Reception: Saturday, June 25, 5 to 8:30 p.m.
Cody Kuehl gallops into Valkarie Gallery with a new slate of his readily identifiable updated Old West narratives. But in Kuehl’s world, governing by gunfire might not be the best way to build a country. However one reads between the gunshots, his 3-D wall works painted on plexiglass and panels shoot for the heart. 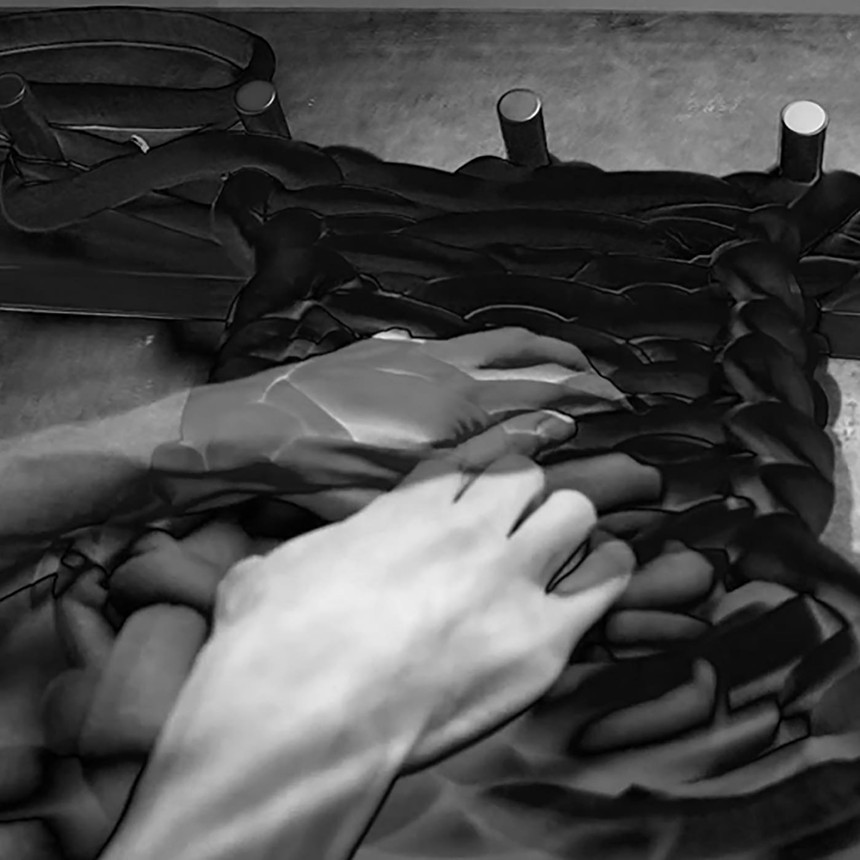 Sharifa Moore premieres new experimental film at the Art Gym.
Sharifa Moore
Sharifa Moore: Inculcation
Amelia Wiygul: Poetry and Other Mirrors
Valeri Clarke: Flag Day
Art Gym Denver, 1460 Leyden Street
Thursday, June 23, through July 24
Sharifa Moore, an independent curator, executive director and curator at Denver Digerati and a boardmember at Tilt West, is also an artist in her own right, with an interest in experimental film. Moore will have her own exhibition at the Art Gym that explores the elements of female identity that are held back by the overbearing bombardment on society by advertisements and other visual media touting domestic products and gender stereotypes. Also on view, new work by Amelia Wiygul and Valeri Clark. 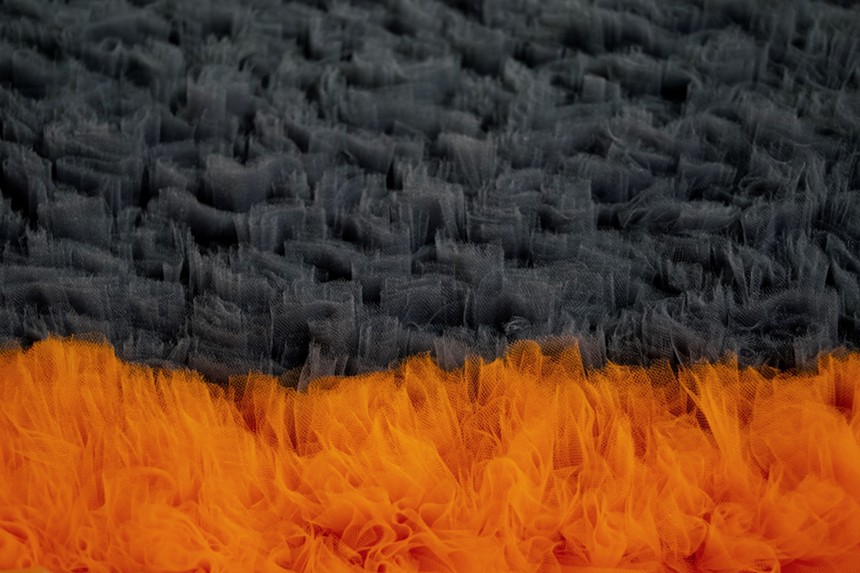 Ana Maria Hernando, "A Far Silent Sea/Swept Land" (detail), tulle and mixed media.
Ana Maria Hernando, courtesy of Robischon Gallery
Ana María Hernando, Geometrias Tiernas
Jonathan Parker, constructed painting; Don Voisine, painting; Jim Osman, sculpture; David Fought, sculpture; Amy Ellingson, painting and drawing
Robischon Gallery, 1740 Wazee Street
Friday, June 24, through August 13
Robischon Gallery is ready for summer by launching concurrent shows by six gallery artists, with a big spotlight on Ana María Hernando, who will be represented by signature wall pieces and sculpture, from framed painted and drafted floral imagery to voluminous tulle installations that reflect her teenage engagement in the communal weaving of the material in her native Argentina, where her family owned a textile workshop. That in itself is worth dropping in for, but painters Amy Ellingson and Don Voisine, sculptors David Fought and Jim Osman, and Jonathan Parker, who paints on three-dimensional surfaces, will all have work on view, as well. 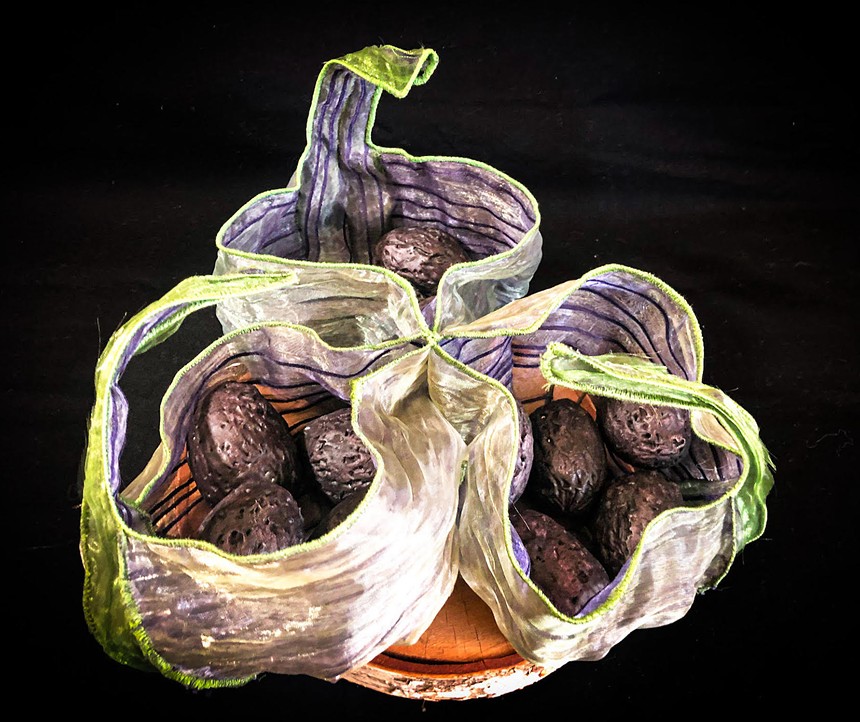 Laurie Hill Gibb, "Hellebore."
Laurie Hill Gibb
Melody Epperson, Discover the Covered: The Artist’s Process
Laurie Hill Gibb, Transform the Tiny
Friday, June 24, through July 8
Next Gallery, 40 West Art Hub, 6501 West Colfax Avenue, Lakewood
Shows turn over at three of the new 40 West Art Hub’s co-op galleries, beginning with shows by mother-daughter duo Laurie Hill Gibb and Melody Epperson at Next Gallery. Gibb, a mixed-media textile artist, presents macro images of nature’s miniatures — seeds, pods and microscopic lifeforms — in a call to protect the earth. Epperson, who works with encaustic, cold wax and oil paint, muses on the creative process and the intuitive schematic that takes an idea into its final physical embodiment. The Next member show Collaboration also continues, and if you are an emerging artist looking for a leg up, Next is taking applications for its scholarship program, which awards one artist with a one-year gallery membership and mentoring, as well as an additional mentorship award. Details here. 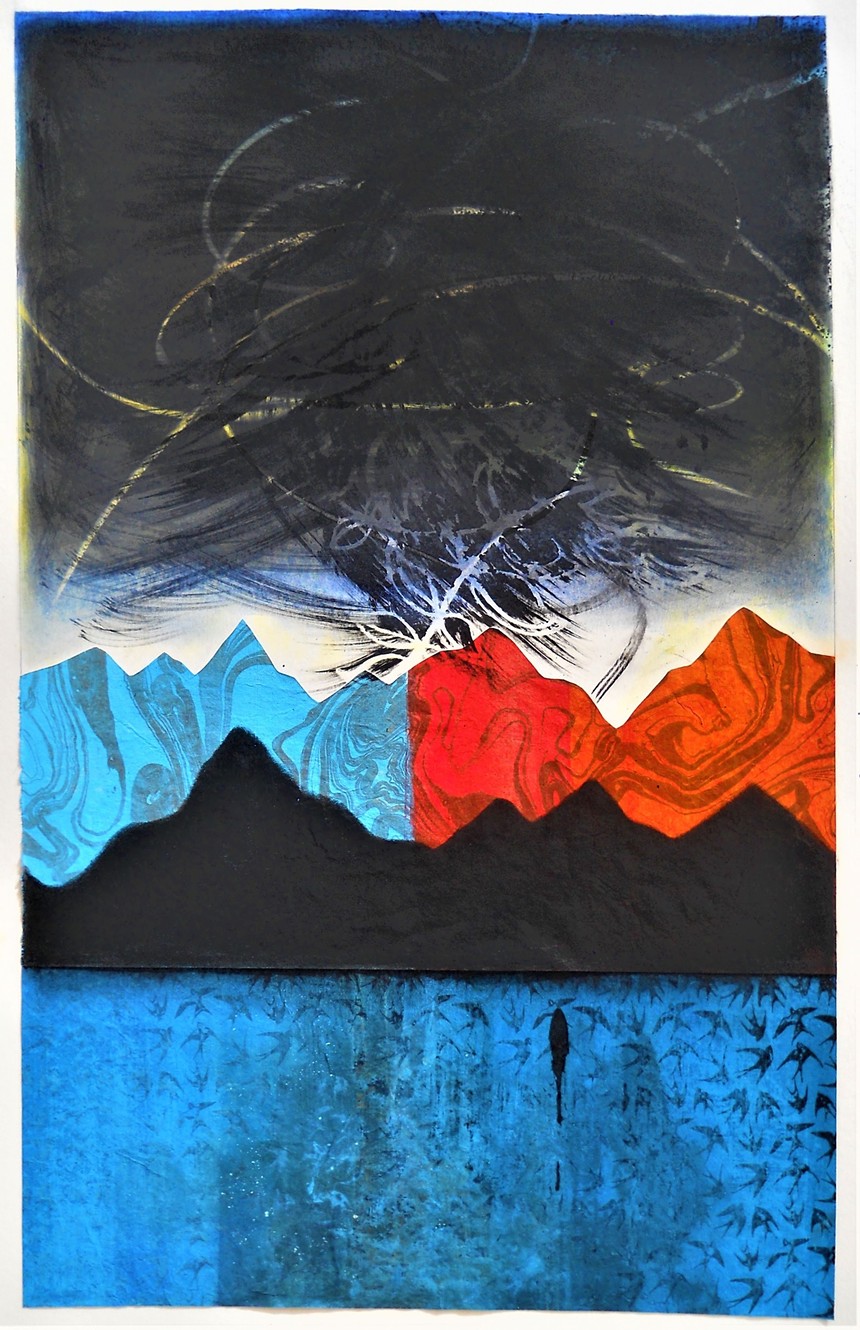 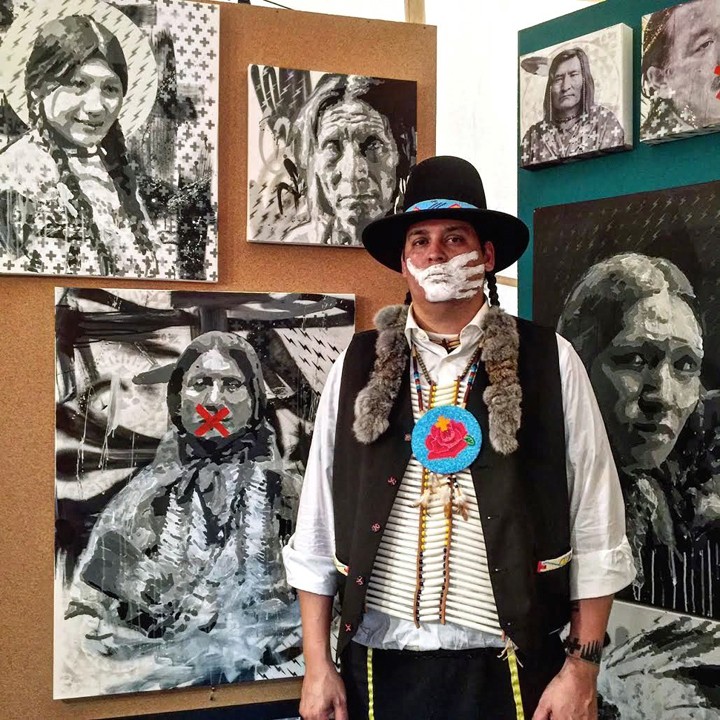 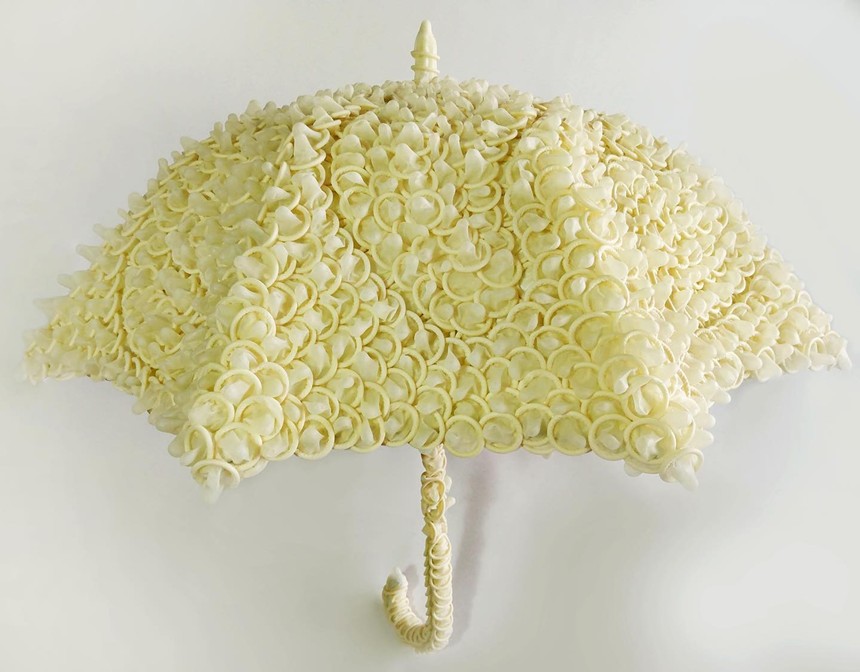 S. Legg, “Umbrella.”
S. Legg, courtesy of Leon Gallery
S. Legg, Pieces
Leon Gallery, 1112 East 17th Avenue
Saturday, June 25, through August 6
Opening Reception: Saturday, June 25, 7 to 11 p.m.
Denver artist S. Legg believes an artist releases an artwork once completed, allowing it to ripen into its own narrative. That might be why he never stays too long in one creative spot. Always changing as a workman building art, Legg started out a photographer and segued into assemblage, a pair of mediums imbued with the ordinary; continuing in that vein and reappraising past interests, he now consciously tries not to assign any personal meaning to the work, and that’s where Pieces falls: The exhibition of sculptures, photographs and videos is meant to be taken in without judgment or the assignation of meaning. Also, it’s pretty cool.

Douglas Land Conservancy: Capturing the Beauty of the Land Plein Air Exhibition
Perry Street Social Pavilion, 414 Perry Street, Castle Rock
Saturday, June 25, 10 a.m. to 8 p.m.,  and Sunday, June 26, from 10 a.m. to 4 p.m.
Plein Air fanatics can rejoice: The annual Douglas Land Conservancy Plein Air Exhibition is back. After five days spreading out to paint the landscape in a variety of public and private conserved properties in southern Douglas County, 25 artists are hanging their freshly painted treasures in Castle Rock this weekend for an exhibition and sale. The show is a fundraiser for the Douglas Land Conservancy, a nonprofit dedicated to preserving open space, which receives a portion of every art sale.

Herbert Bayer: An Introduction, installation view.
Courtesy of the Bayer Center
Resnick Center for Herbert Bayer Studies Public Opening and Tours
Opens Sunday, June 26
Summer hours through September 1: Mondays through Saturdays, noon to 5 p.m.; Sundays, 2 to 7 p.m.
Tours: 1:45 p.m. daily, June 26 through July 1; 12:30 p.m. thereafter, Monday, July 4, through September 1
Bayer Center, Aspen Institute Campus, 610 Gillespie Avenue, Aspen
There seems to be a spike in appreciation for artists we can consider Colorado treasures, including Herbert Bayer, a leading figure in the Bauhaus movement who wore many creative hats as an artist, sculptor, designer and architect. Bayer moved to Aspen in 1946, bringing his reputation and palette of skills with him. In Aspen, he helped design the Aspen Institute’s quarters, and in turn, the Institute has now created the Bauhaus-inspired Resnick Center for Herbert Bayer Studies to house and display a collection of Bayer’s diverse works. The new space opens to the public on Sunday afternoon with the exhibition Herbert Bayer: An Introduction, curated by Bayer scholar Bernard Jazzar. Admission and tours are free; reserve tours at Eventbrite.