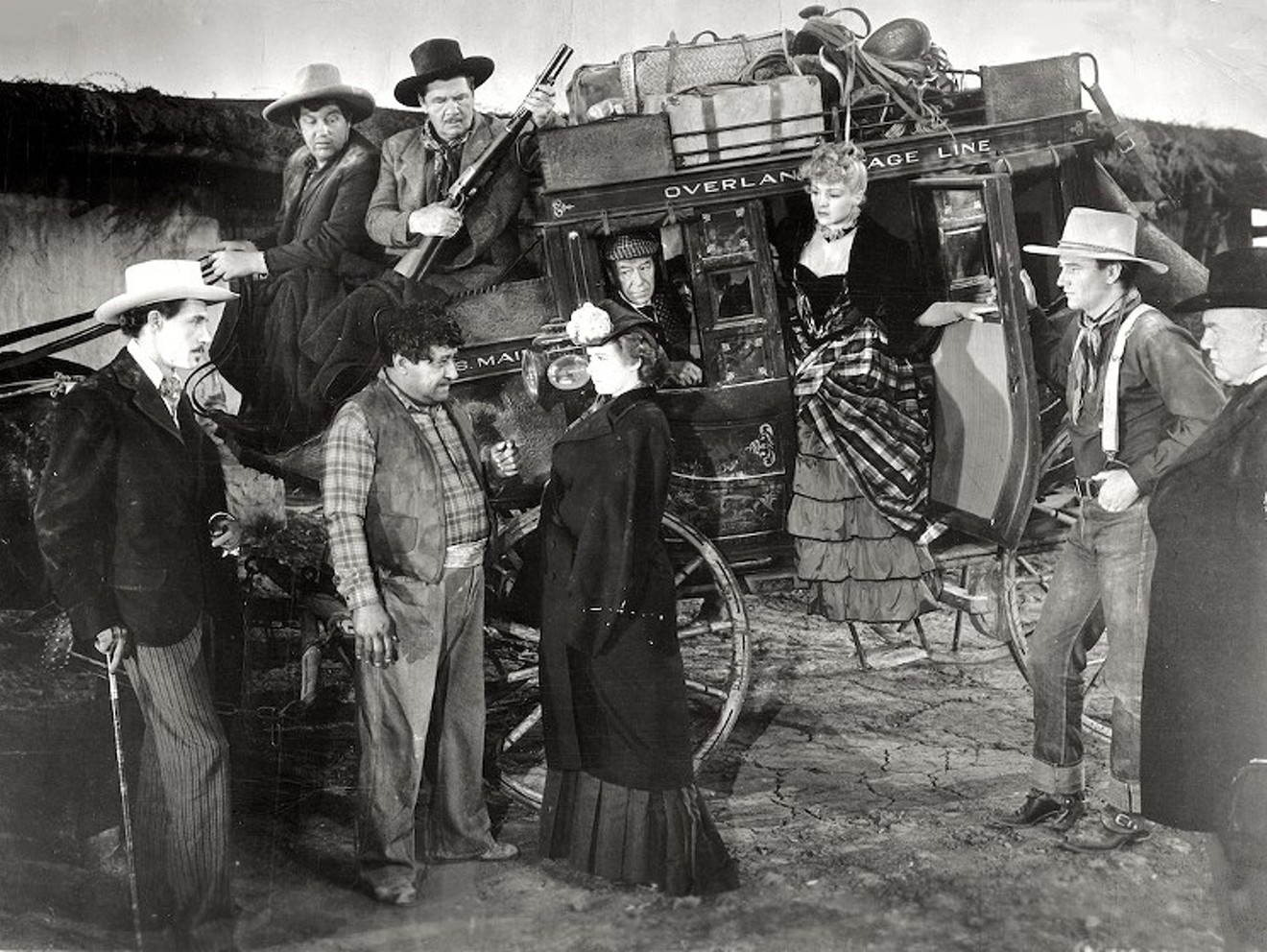 John Wayne was a breakout star in Stagecoach, partly filmed in Colorado. Stagecoach
Colorado is plenty colorful, and has inspired many filmmakers who've filmed in this state.

Here are the ten best movies made in Colorado:

Stagecoach (1939)
Colorado filming location: Cañon City
It may be more than eighty years old, but Stagecoach remains in the running for the honor of best Western ever made, not to mention the most iconic. Director John Ford loaded a slew of charismatic characters into the title vehicle and sent them rolling across the wide-open spaces, where they experienced thrilling action, tense drama, comic relief and plenty more. Featured player John Wayne’s raw-boned, naturalistic charisma leaps off the screen; no wonder he soon became one of the biggest movie stars in the world.

The Searchers (1956)
Colorado filming locations: Aspen, Gunnison
Director John Ford and leading man John Wayne teamed up many times after Stagecoach, but seldom as memorably as in this dark opus that plays even more powerfully today than upon its original release. Wayne’s Ethan Edwards is essentially fueled by deeply seeded racism during a quest to rescue his niece (played by Natalie Wood) from Comanches. The tension between Wayne’s good-guy persona and the bad things Edwards does makes The Searchers a viewing experience as complex as it is exciting.

In Cold Blood (1967)
Colorado filming location: Cañon City
Director Richard Brooks’s harsh, documentary-style approach to Truman Capote’s true-crime book, which depicted a Kansas family’s brutal slaying and its grim aftermath, could hardly be more influential. Much of the most popular material on Netflix would be unimaginable without it. 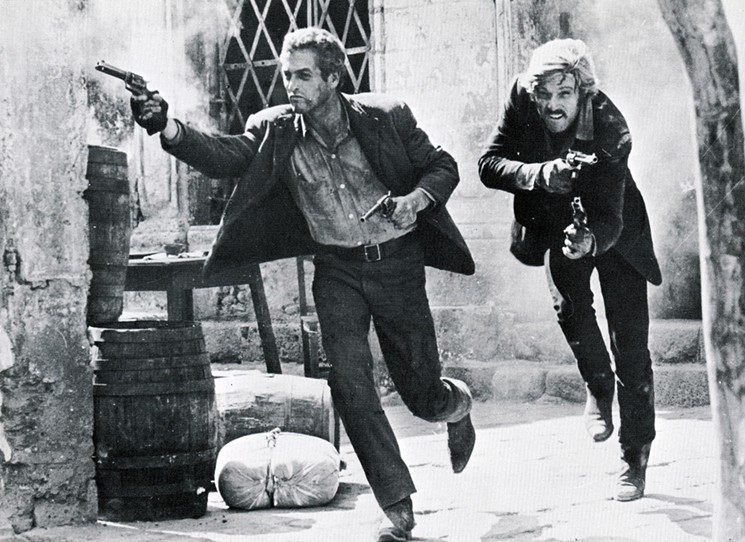 Badlands (1973)
Colorado filming locations: Rocky Ford, La Junta, Las Animas, Trinidad and more
Today, director Terrence Malick enjoys tremendous respect in the filmmaking community despite an artistic approach that tends to make mainstream audiences flee in the opposite direction. But Badlands, a fictionalization of the Charlie Starkweather murders that marked Malick’s feature-film debut, is a much more accessible production. Then-youthful stars Martin Sheen and Sissy Spacek evoke innocence among the bloodshed against the backdrop of seldom-seen Colorado places that bring a gorgeous glow to the big screen.

Sleeper (1973)
Colorado filming locations: Boulder, Golden, Lakewood and more
These days, Woody Allen is such a #MeToo-era pariah that it’s difficult to recall what a great talent he once was. Sleeper, which finds Allen’s character awakening in a technocratic future where sexual climax is obtained in seconds by way of a miraculous device dubbed the Orgasmatron, is arguably the best of Allen’s “early, funny ones,” and its name lives on as an identifier for the modernistic building visible from Interstate 70 west of Denver, the “Sleeper House.” 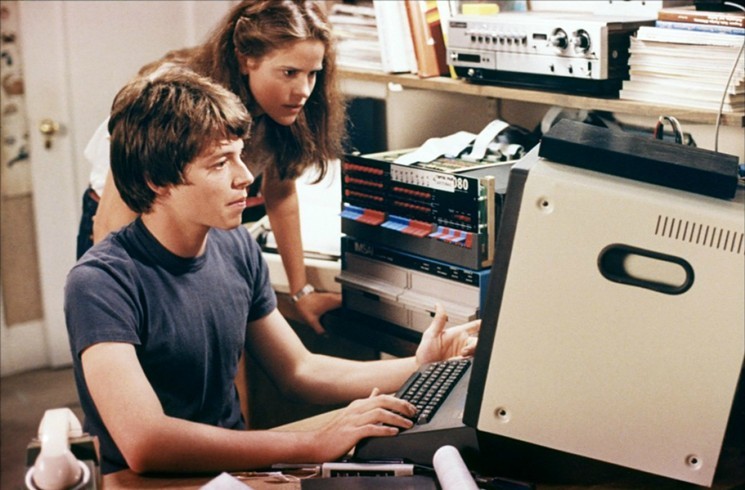 Matthew Broderick puts peace at risk in WarGames.
WarGames
WarGames (1983)
Colorado filming location: Colorado Springs
The supposedly high-tech look of WarGames hasn’t aged well. But the story of a teen video-gamer, played by a pre-Ferris Bueller Matthew Broderick, who nearly triggers global Armageddon, is holding up very well, thank you. Ready Player One, an Ernest Cline novel adapted for film by Steven Spielberg, is practically a modern remake of this quintessential ’80s adventure.

Indiana Jones and the Last Crusade (1989)
Colorado filming locations: Alamosa, Cortez, Pagosa Springs
No, it’s not as good as Raiders of the Lost Ark. But Last Crusade holds up thanks to the unexpected chemistry between Harrison Ford, as the titular archaeologist, and Sean Connery, portraying his bookish dad. Set aside quibbles about the believability of this relationship and enjoy the smile-inducing banter that knits together a search for the Holy Grail and the battle against Nazis (naturally) who want it, too.

In the Line of Fire (1993)
Colorado filming location: Denver (Civic Center Park)
Clint Eastwood may not be a particularly emotive actor, but he knows how to convey guilt. That makes him the perfect person to portray aging Secret Service agent Frank Horrigan, who’s still torturing himself over his inability to prevent President John F. Kennedy’s assassination. Director Wolfgang Petersen, of Das Boot fame, gives Horrigan a chance for redemption in a thriller that draws the tension tight.

About Schmidt (2002)
Colorado filming locations: Boulder, Denver
Why isn’t Jack Nicholson’s performance in About Schmidt universally acclaimed as one of his very best? Largely because Nicholson eschews shtick and downsizes his trademark tics as a curmudgeonly retiree whose trip to his estranged daughter’s wedding turns out far differently than he expected. Co-writer/director Alexander Payne’s piece is both funny and melancholic in all the best ways.
KEEP WESTWORD FREE... Since we started Westword, it has been defined as the free, independent voice of Denver, and we'd like to keep it that way. With local media under siege, it's more important than ever for us to rally support behind funding our local journalism. You can help by participating in our "I Support" program, allowing us to keep offering readers access to our incisive coverage of local news, food and culture with no paywalls.
Make a one-time donation today for as little as $1.