Running of the Gays returns! Nicole Daniels | Body and Glass Photography
Summer might be over, but there are plenty of days of warmer weather left to celebrate in the great outdoors. Raise money for worthy causes — and risk a sprained ankle — at the Running of the Gays, or sip some wine and nosh to your heart's delight at the Denver Food and Wine Festival. Want more? Keep reading!

It seems like food festivals these days offer more than just tasty bites. Attendees expect more, and more they'll get at the Denver Food and Wine Festival, which returns on Tuesday, September 4, for six days of dining, drinking, mingling with fellow foodies and more at various locations around the city. The festival kicks off with a collaboration with the Denver Film Society for a screening of The Goddesses of Food, a 2017 documentary about established and rising female chefs and the mark they're making in the kitchen. The evening begins at 6 p.m. with food, wine and cocktails, and the screening starts at 7:30 p.m. at the Sie FilmCenter, 2510 East Colfax Avenue; admission is $20 for DFS members and $25 for non-members and includes food and drinks. Find tickets at denverfilm.org and more information about the Denver Food and Wine Festival at denverfoodandwine.com.

Comedy Works Denver is on a mission: to find the best new faces in comedy in the state. In that vein, it's hosting the New Faces Contest, which whittles down more than 100 comedians to just one grand prize winner. The contest continues at 8 p.m. on Wednesday, September 5, with the Wild Card Round, in which the runners-up from the first round compete for the last two spots in the semi-finals. The blood-bash of laughs goes down at the downtown Comedy Works, 1226 15th Street, and tickets are $14 at comedyworks.com. See Andrea Vahl, Ben Duncan, Dylan Dean and more in action — and may the best funny guy or gal win!

Former Sie FilmCenter programmer Ernie Quiroz brought CineLatino — an idea he first tested while coordinating film programs at the Phoenix Art Museum — to Denver when he arrived in 2013. With the support of the Denver Film Society, what began as a film series blew up to become a full-fledged festival, one that continues to thrive in 2018. The CineLatino Film Festival opens its fifth season on Thursday, September 6, and runs through Sunday, September 9, at the Sie, 2510 East Colfax Avenue, with a slew of premieres, comedies, dramas and documentaries from the pan-Latin universe and even a ¡Viva Kid Films! program for families; it begins with a 7 p.m. screening of Constructing Albert, a documentary that follows renowned Spanish chef Albert Adrià (brother of Ferran) in and out of the kitchen. Tickets range from $10 to $12 per program to $70 to $85 for a full-access pass. Find a complete schedule and reserve seats at denverfilm.org. 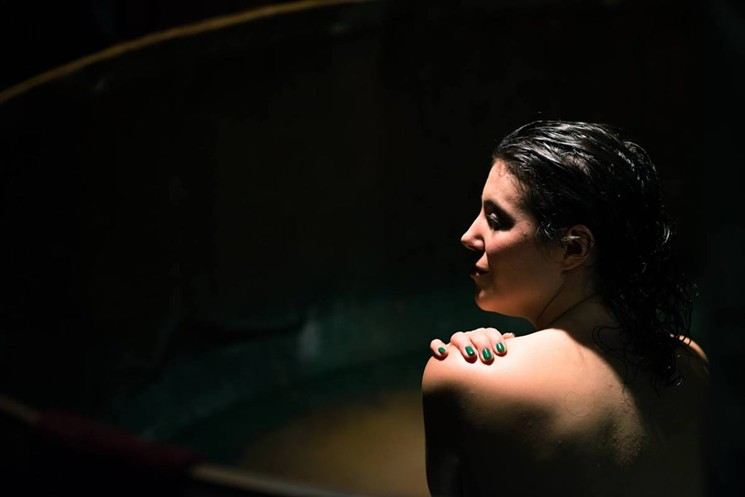 Wade into the deep end at Broken Bone Bathtub.
Siobhan O'Loughlin
Immersive theater is all the rage right now, possibly because modern audiences tired of being dumbed-down by the Internet are looking for head-on experiences. Enter Broken Bone Bathtub, in which a naked woman in a bathtub pours out the subtext of her journey from trauma to healing after a serious bike accident upends her life. It does, indeed, take place au naturel in a real bathtub in a real bathroom, with the audience standing in for friends sharing a tale of pain and redemption. The production, presented by immersive artist Lonnie Hanzon’s Enchantment Society, opens with shows at 7 and 9 p.m. on Thursday, September 6, and runs through September 23 in the Lakewood Glens neighborhood, at a location that will be revealed to ticket holders the morning of their chosen performance. Tickets are $36; get yours at brokenbonebathtub.com.

Feast your eyes on all the shiny things Earth has to offer at the Colorado Mineral and Fossil Show, Friday, September 7, to Saturday, September 15, at the Crowne Plaza Denver Airport Convention Center, 15500 East 40th Avenue. Vendors will be on hand with minerals from around the world, brilliant gemstones, meteorites, moldavites and museum-quality fossils. Buy in small quantities or wholesale — or just do some window shopping. The show is free to attend, but ready your wallet for some meteor-sized dents. Show hours are 9 a.m. to 6 p.m. Monday through Saturday for wholesale shopping and 10 a.m. to 6 p.m. for retail, with varying hours on Sunday and closing day. For details, go to coloradomineralandfossilshows.com.

Furniture looking a little dated? Bathroom in need of a redo? Head to the Colorado Fall Home Show, where more than 250 vendors will offer the latest in home renovation and sustainable living — as well as furnishings for every room in your home — from Friday, September 7, to Sunday, September 9, at the Colorado Convention Center. Interior designers will be available to answer questions and give advice at free forums held throughout the weekend. The show goes from 10 a.m. to 8 p.m. Friday and Saturday and 10 a.m. to 5 p.m. Sunday; tickets are $10 for adults and $8 for seniors. Find more information, including a list of vendors and a forum schedule, at coloradogardenfoundation.org.

A La Reconquista: Homage to La Chicanidad in Denver honors Hispanic Heritage Month.
Carlota Espinoza
In honor of Hispanic Heritage Month and its own rebirth in a new location, the Chicano Humanities and Arts Council returns to its roots with A La Reconquista: Homage to La Chicanidad in Denver, an exhibition of works inspired by pioneering Colorado Chicana artist Carlota Espinoza, whose mural “A Tribute to Three Mexican Heroes” adorned Corky Gonzales’s Crusade for Justice headquarters in the ’60s. Show participants include veteran CHAC artists Meggan De Anza and Carlos Frésquez, gallery co-founder (and show curator) Carlos Santistevan Sr., santero Frank Zamora, street artist Josiah Lopez and painter Alejandra Lujan. See it during an opening reception at 5 p.m. Friday, September 7, at CHAC’s new digs, 222 Santa Fe Drive, or catch up with the show through September 28. Search "CHAC Gallery-Denver" on Facebook for more information.