Outside the Box: Black Cube Breaks Barriers With Site-Specific Art 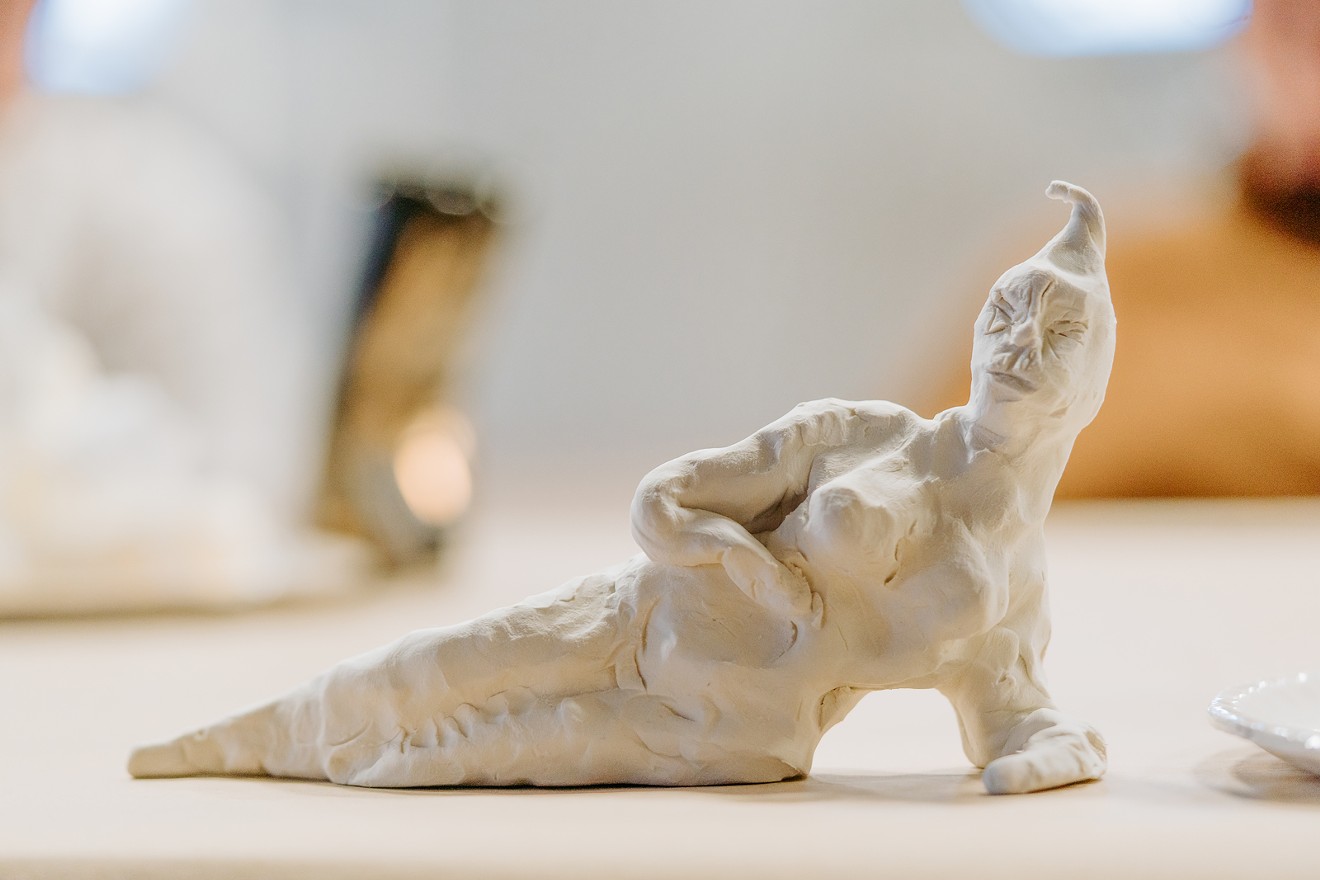 A body sculpture made of clay at the workshop in March. Black Cube
Think of the last art gallery you were in. Whether you were viewing a sculpture, painting or other type of medium, the walls surrounding the art were likely white. Art galleries are known for having a blank backdrop — an empty white cube where the art breathes life into the room.

Cortney Lane Stell has been working to challenge that aesthetic ideal through her work as executive director and chief curator for Black Cube, a nomadic art nonprofit in Englewood that focuses on site-specific art. The genre, born in the ’50s and ’60s, consists of work that intentionally interacts with and relies on its location. For example, Nancy Holt's "Sun Tunnels," at the Great Basin Desert in Utah, are set up to be aligned with the sun during summer and winter solstice. If removed from the desert, the piece's context and purpose would be lost.


"This moment in art was really when artists were pushing away from gallery and museum structures and from these big London and New York art scenes and just trying to relate to the land," Stell explains. "So since [Black Cube] comes from this region in the world, we wanted to build off that history."

In keeping with its mission as a nomadic art museum, Black Cube's art is not in one building with fixed hours of operation; it's all over the state, with most of its projects around the Rocky Mountain region. Black Cube has produced both permanent and temporary installations, while Stell seeks out recognizable artists who have experience taking on large-scale projects. She likes to make sure each project is very different from the last to continue Black Cube's growth.

The artists first go through a fellowship with Black Cube, an eighteen-month program in which they are guided through the process of producing their site-specific artwork. To scout out and get permission for the locations of the art, Stell has to reach out to the director of operations at different sites. The process is not always easy: For a project called "Avalanche," which she wanted to do at Denver Wastewater Management, she almost had to give up and pick a new location.

"We were looking for other sites," Stell recalls. "I ended up sitting outside the building in the smoking section, and I met the director of operations' assistant and told her about the project, and she got me a meeting in like two days. Before I even described the whole project, they said yes."

Before Black Cube, Stell worked in a lot of white-cube spaces as a gallery director at Rocky Mountain College of Art + Design and as an independent curator. Through her curatorial work for RedLine Contemporary Art Center, she met Laura Merage of the Laura and David Merage Foundation, which founded RedLine in 2007. In 2014, Stell began collaborating with Merage and her foundation to create a business plan for Black Cube.

Since Black Cube opened eight years ago, it has produced 43 site-specific artworks, and currently has five more works in progress. "We support ambitious ideas by artists that cannot be contained by traditional exhibition spaces," Stell says. "We bring contemporary art to the most diverse audiences possible." Black Cube's first program ran in October 2015. It was called "Sophont in Action," by Desirée Holman, a performance dance piece at Red Rocks Park and Amphitheatre that projected media onto the red sandstone rocks.

One of Stell's favorite exhibits was "Unclassified Site Museum," a fake archaeological dig site on the 16th Street Mall created by Sangree, an artistic collaboration between René Godínez Pozas and Carlos Lara. "It was a former RTD bus station that was closed, and it was about to be redeveloped into a multi-family housing complex, and I worked with a Mexican artist collaborative called Sangree, and they envisioned that the entire block was archaeological ruins," Stell explains. "We excavated two plots of land and built fake ruins in them, then capped them with walkable glass and lit them at night." 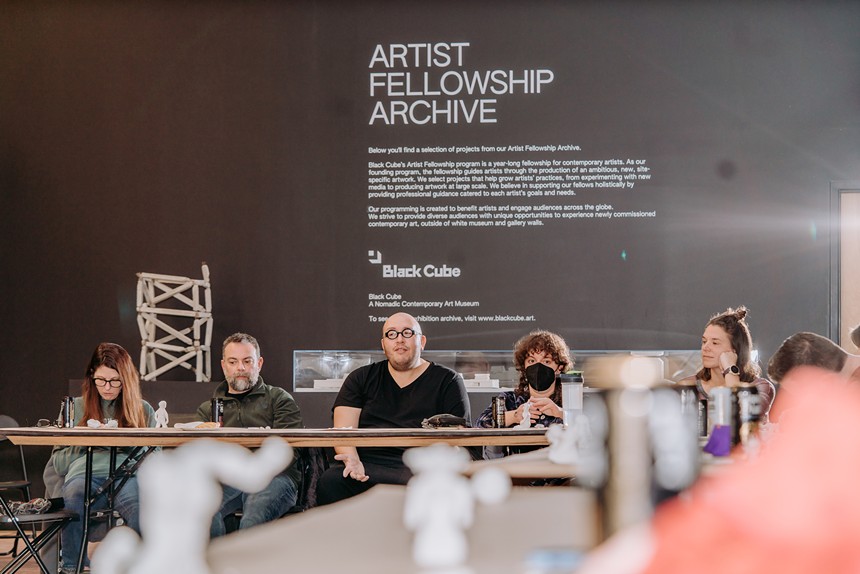 Black Cube's workshop in March.
Black
The biggest challenge of keeping Black Cube open is that it's always working on something new, Stell says. She likens it to the Greek myth of Sisyphus, who was punished for cheating death by being forced to push a boulder up a hill, only for it to roll down every time it came close to the top. "In white cube, you can plan an exhibition calendar for the year; it’s nice and neat," Stell says. "With this model...every project is new relationships, new partners."

On Friday, October 7, Black Cube will mount its first exhibit inside its warehouse headquarters since the pandemic: Anuar Maauad's WE ARE BODIES (The archaeology files). It's only the second exhibition hosted in that space; the first was a 2019 project called The Fulfillment Center. There are no white walls, here, however, only black.

Maauad, an artist from Mexico City, was a Black Cube fellow in 2019 and produced an installation called SHARE, which consisted of 100 small bronze texts that were put on different buildings throughout Denver. The text mimicked the style, color and font of the Trump Tower sign and read, "To share is precious, pure, and fair," from Marvin Gaye's "I Want You."

Since 2009, Maauad has hosted workshops in which people are told to create small sculptures of their bodies out of self-drying clay. It began in Mexico as a collaboration with Museo de Arte Contemporáneo de Monterrey to expose children in underprivileged communities to more art. Maauad hosted a similar workshop with 48 residents in Denver in March, after which he turned some of the small works into large-scale sculptures using 3-D printing.

Over the thirteen years Maauad has been hosting the workshops, he has enlarged around forty out of the 7,000 sculptures that have been made by random participants. WE ARE BODIES will display ten sculptures, some from Denver and a few from his archives. Although the exhibit is inside the headquarters, the project is still considered site-specific because it is being showcased in the same space that the workshop was held.

Maauad says he doesn't have any specific goals for what he wants people to get out of the exhibition. "If an artwork makes you question something and tries to challenge you to understand a different point of view, I think that’s enough," he attests.

As a curator who has primarily worked in white-box spaces, Stell finds Black Cube's site-specific art a breath of fresh air. Each project is a new adventure, daring her to think outside the white cube.

"I’m a convert to this kind of art. It’s rewarding like no other," she concludes. "When these projects happen — well, there’s something truly magical about them."

WE ARE BODIES (The archaeology files) opening reception, 6 to 9 p.m. Friday, October 7, Black Cube, 2925 South Umatilla Street, Englewood. The exhibition is free; make an appointment to see it through February 10.
KEEP WESTWORD FREE... Since we started Westword, it has been defined as the free, independent voice of Denver, and we'd like to keep it that way. With local media under siege, it's more important than ever for us to rally support behind funding our local journalism. You can help by participating in our "I Support" program, allowing us to keep offering readers access to our incisive coverage of local news, food and culture with no paywalls.
Make a one-time donation today for as little as $1.
Katrina Leibee, a recent graduate of Colorado State University, is an editorial fellow at Westword, covering politics, business and culture.
Contact: Katrina Leibee
Follow:
Twitter: @katrinaleibee