Five of Denver's Most Mysterious Works of Public Art

"Blue Mustang" Denver Public Art
Denver has plenty of public art, from murals by local legends to sculptures by internationally acclaimed artists. Some works have become so famous that they are almost synonymous with the city, at least for art nerds, like "The Yearling" or the big blue bear actually titled "I See What You Mean." Others are simply baffling to behold, and a few — most notably "Blue Mustang" — have baffling stories behind them.

Here are five of Denver's most mysterious works of public art:

"Laughing Escalator"
Colorado Convention Center
Jim Green's "Laughing Escalator" was installed in the Colorado Convention Center in 2004, and it has unnerved unknowing riders ever since. Using a four-channel sound installation, the escalator that descends into the ballroom pre-function area plays recorded sounds of laughter through the cracks between its steps. According to Denver Public Art, "a variety of clear, wholesome voices will be used" for the "open-air mix of sound [that creates] a continually changing pattern of rhythms constructed from laughter." These days, with COVID cutting down on crowds, the sounds could seem particularly ghostly; you might prefer to take the stairs. 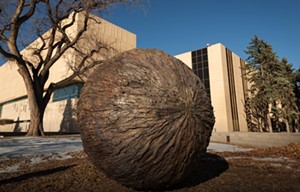 This seven-foot-tall sphere of bronze looks like it's waiting for an equally large scarab to push it, and as you approach "Rondure" outside the Denver Museum of Nature & Science, you'll find it makes noise, too. The motion-activated sound features cries of wildlife found in Colorado, which artist Nikki Pike collaborated on with bARTer Collective. To the work itself, Pike applied a texture reminiscent of tree bark, which gives the sphere a natural effect that complements its sounds from nature.

"Blucifer"
Denver International Airport
The slightly terrifying, 32-foot-tall blue horse outside Denver International Airport got the nickname "Blucifer" not just for its glowing neon eyes, but for its creation story: Making this sculpture killed Luis Jiménez.  The piece was commissioned for the then-still-unopened airport in 1993; the New Mexico artist was far behind deadline and being sued by the city when he was working in his studio in 2006. That's when part of the in-progress horse fell on him and killed him; his sons finished the project. The sculpture was inspired by an old Colorado legend about a blue stallion mustang that would lead other horses to water and even fly; the blazing eyes were added as a salute to Jiménez's father, who owned a neon sign shop. It's certainly an unforgettable sight for those entering or leaving the city (although we wish people would quit assuming that it symbolizes the Broncos). 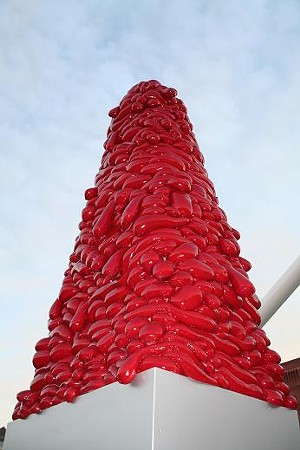 "National Velvet"
Denver Public Art
"National Velvet"
Platte Street
John McEnroe's sculpture near the 16th Street Pedestrian Bridge has garnered controversy ever since it was installed in 2008. The twenty-foot-tall obelisk is made up of what look like melting jelly beans mounded up into an almost Christmas tree-like shape that is highlighted by internal lighting. The sculpture won the People's Choice Award for best public art the year it was installed, but not everyone has been happy about it, with one Westword wag labeling it "Saggy Boob, Electric Penis."

"Sky Song"
Levitt Pavilion
Artworks like "Sky Song" come alive only through interaction with their viewers — and sometimes aren't even recognized as artwork. The installation at the Levitt Pavilion by Denver artists Nick Geurts and Ryan Elmendorf does not appear as a traditional sculpture, but its 33 buttons beckon passersby to interact with it and figure out just exactly what it is and does. The eight-foot-tall polished steel structure and its surroundings are activated by the buttons, which turn on bell and wind chime sounds when the environment is quiet, or cast lights on the amphitheater facade during a concert. It's easy to miss, but hauntingly strange.
KEEP WESTWORD FREE... Since we started Westword, it has been defined as the free, independent voice of Denver, and we'd like to keep it that way. With local media under siege, it's more important than ever for us to rally support behind funding our local journalism. You can help by participating in our "I Support" program, allowing us to keep offering readers access to our incisive coverage of local news, food and culture with no paywalls.
Make a one-time donation today for as little as $1.
Emily Ferguson is Westword's Culture Editor, covering Denver's flourishing arts and music scene. Before landing this position, she worked as an editor at local and national political publications and held some odd jobs suited to her odd personality, including selling grilled cheese sandwiches at music festivals and performing with fire. Emily also writes on the arts for the Wall Street Journal and is an oil painter in her free time.
Contact: Emily Ferguson