Memo Between Symphony and City Could Signal the End of Boettcher 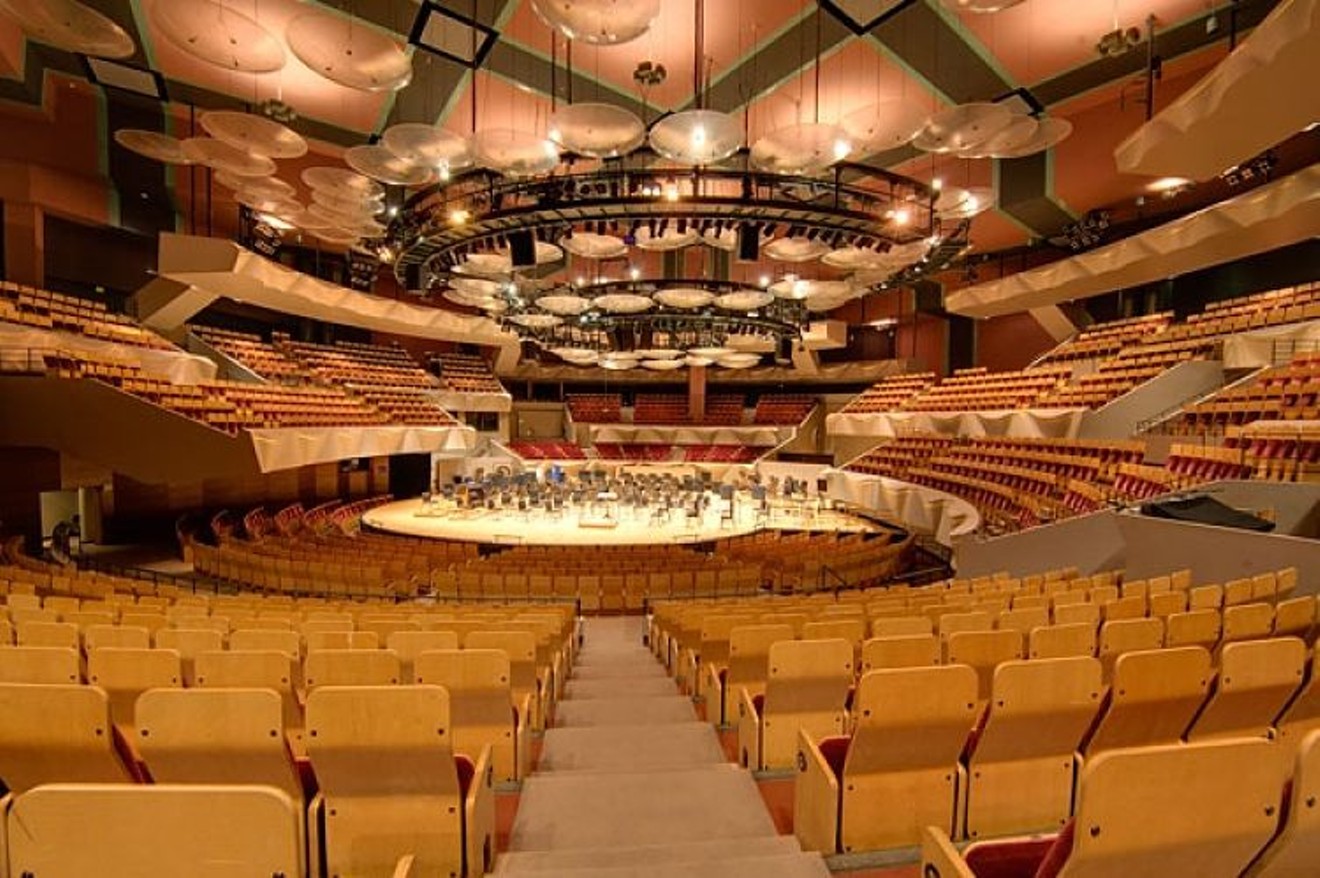 Boettcher Concert Hall just turned forty. Will it see fifty? artscomplex.com
Boettcher Concert Hall, the first "in the round" symphony hall in the United States, hosted its inaugural performance four decades ago. It was built in 1978 as a home for the Denver Symphony Orchestra — now the Colorado Symphony — as part of the under-construction Denver Performing Arts Complex, including the theater building where the Denver Center for the Performing Arts would launch its theater company on New Year's Eve 1979. Owned and operated by the City of Denver, DPAC is the third largest performing-arts complex in the country. And parts of it, particularly Boettcher, are due for an update...or perhaps a replacement. Although Boettcher was designed to be more intimate and less formal than traditional concerts halls, there have long been complaints about inconsistent sound. And at 2,700 seats, it's just too big for many productions.

Still, Boettcher has its fans, and when news surfaced almost five years ago that the concert hall might go, there was plenty of blowback...with Colorado Symphony CEO Jerome Kern the first to sound the alarm.

But the City of Denver and the Colorado Symphony just announced a "memorandum of understanding" regarding the status of Boettcher and the symphony's search for a permanent home...which could signal the end of the concert hall in its current incarnation.

Today the Colorado Symphony announced their execution of a Memorandum of Understanding (MOU) with the City and County of Denver that allows for the commencement of plans to bring a new state-of-the-art symphony performance hall to Denver. An initial timeline for the project has not been determined, but planning will begin immediately.

As part of the MOU, the Colorado Symphony will participate in discussions pertaining to The Next Stage plan for the Denver Performing Arts Complex (DPAC) including a new symphony hall on the DPAC footprint. Within the MOU’s outline, the Colorado Symphony is also free to pursue additional opportunities within the City of Denver for a new venue outside of the DPAC.

The City of Denver has agreed to commit the remaining $16.7 million from the general obligation bond which was voted on by the citizens of Denver in 2007 to the project, so long as a proposed new symphony hall is constructed within the Denver City limits, meets a mutually agreed upon understanding if relocated outside the DPAC, and funds must be used by 9/30/2023.

“This is an important day for the Colorado Symphony and we’re grateful to the City of Denver and Mayor Michael B. Hancock for their effort throughout this process,” said Colorado Symphony CEO and Board Chair Jerome H. Kern. “While Boettcher Concert Hall has been a wonderful home for us for over 40 years, a new venue is imperative to the future growth and success of our organization. This Memorandum of Understanding allows us to partner with the City on an outcome that is beneficial to both. However, if remaining in the DPAC doesn’t benefit us both, the Colorado Symphony has the opportunity to seek options elsewhere, immediately. We look forward to continuing our positive growth and bringing transformative music to this community for years to come.”

After the initial concept of replacing Boettcher was shelved, the city went back to the drawing board. And in March 2016, Mayor Michael Hancock released The Next Stage, the city's vision for the DPAC.

"The plan aims to re-energize the Arts Complex with new and updated venues, more public space and diverse and accessible programming," according to the Next Stage page on the city's website. "While construction will not begin immediately, The Next Stage NOW programming ignites this exciting transformation in the present, with public performances, programming and placemaking initiatives."

So far, the site doesn't list any programming for 2019, but with this joint memorandum seeming to signal the end of Boettcher — certainly in its current configuration — you can expect more announcements soon. Watch for them on the DPAC Facebook page.
KEEP WESTWORD FREE... Since we started Westword, it has been defined as the free, independent voice of Denver, and we'd like to keep it that way. With local media under siege, it's more important than ever for us to rally support behind funding our local journalism. You can help by participating in our "I Support" program, allowing us to keep offering readers access to our incisive coverage of local news, food and culture with no paywalls.
Make a one-time donation today for as little as $1.