Catherine Wallace Hope on Time Travel, Denver and Once Again 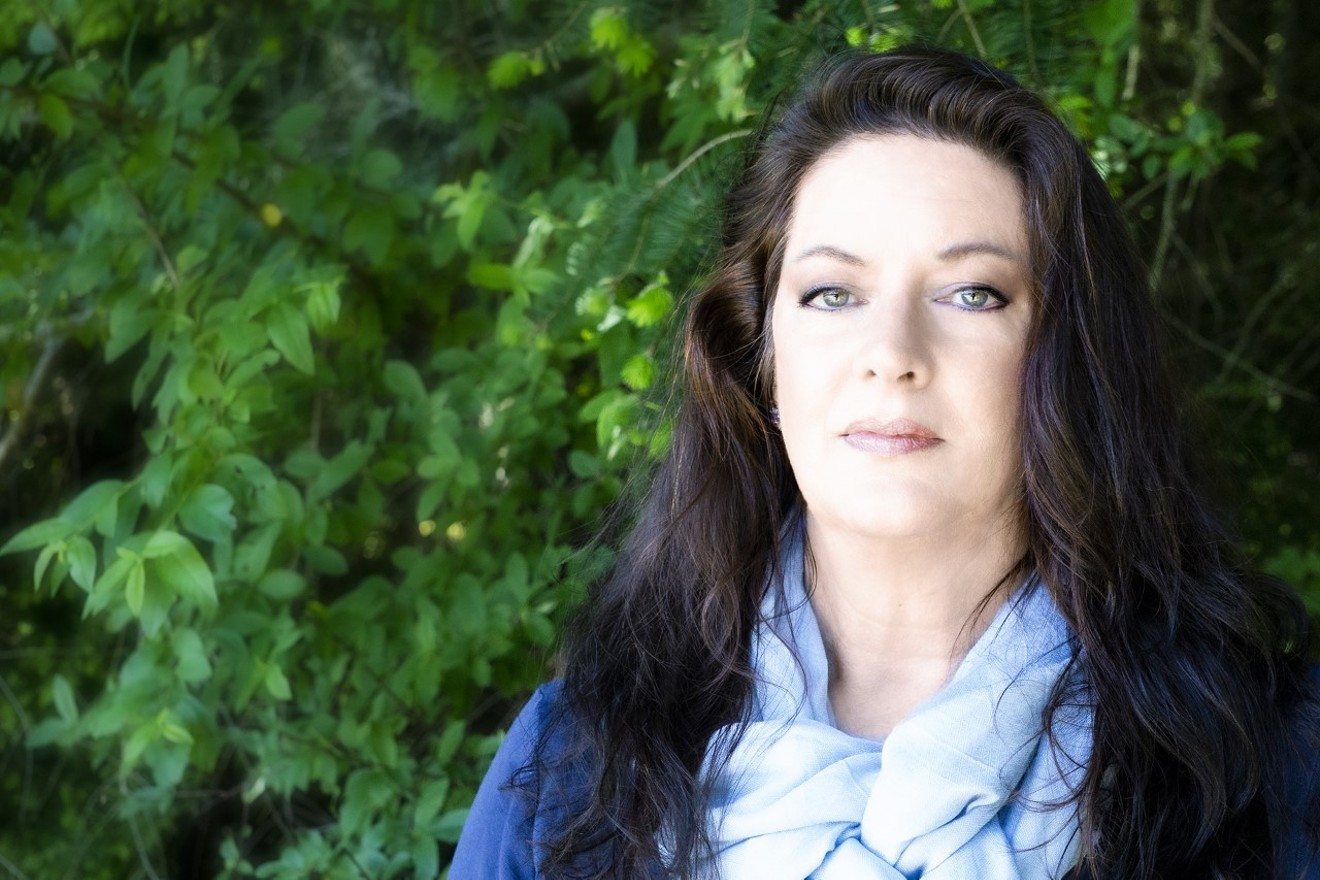 Catherine Wallace Hope brings questions of time and responsibility to a fictional Colorado landscape. G. Hope
Catherine Wallace Hope might live in the Pacific Northwest these days, but her roots are planted deep in Colorado soil. From her ancestry to her education, it’s all Denver. And so is her novel Once Again, a science-fiction thriller released this month that takes advantage of the local landscape and asks the question What if you had one chance to save someone you lost?

It's an interesting question, especially during this pandemic, but also one long asked in literature and entertainment. Works including H.G. Wells, W.W. Jacobs's "The Monkey's Paw," Stephen King's 11/22/63 even Avengers: Endgame have all given their takes on time and the possibility and price of traveling within. We caught up with Hope to talk about her novel, her family’s strong history in Denver, her ongoing work with Lighthouse Writers Workshop, and how she hopes to give something back, literary-style.

Westword: Tell me about your new novel and where the idea for it came from.

Catherine Wallace Hope: Once Again is book-club fiction, which means we hope it’s a dramatic and cinematic experience for readers, but it’s also intended to ask questions they can turn into a provocative group discussion. This book focuses on human questions like those of recovery from loss and the will to change one’s fate, and it questions our perception of time and the nature of memory. There are depths to consider when you ask yourself how you would change your life if you could. Is it possible that our decisions are guided by memories we cannot access? How does that affect our fates? If you could go back and be more true to yourself, how would the course of the future shift?

The original source for this story was a dream from which I awoke in a breathless panic. In the dream, my husband and I had once had a daughter who had been kidnapped, and when I realized the abduction was happening again, I was desperate to find a way to stop it. That’s when I woke up. Once I’d written the dream down, I saw that it paralleled the ancient Greek myth of Hades’s abduction of Zeus and Demeter’s daughter, and I thought that might be an interesting aspect to explore.

How did the book surprise you as you were writing it?

The writing of this book was filled with surprises. Research led to revelations, plot turns required additional research, characters arose and grew — and some of them even turned around and exited the story completely. More than ever, it seems to me that structuring a story is like building a raft, but it’s the raft on which you’re currently afloat, and you’re already out at sea. Things shift beneath you, and you have to improvise. The whole thing evolves, and you have to evolve with it.

So how do you classify this book? Suspense? Science fiction? Suspenseful sci-fi? Or do you think categories in general unnecessarily limit a book's audience reach?

Categories are justifiably necessary. Imagine you’re a bookseller. Let’s do brick-and-mortar, because we all treasure those shops so much. The bell over the door rings, and a customer walks in. You approach and ask if you can help. The customer says she’s looking for a book for a friend. The stock in your two-story building includes thousands of titles from cookbooks to cozy mysteries, from humor to science to history, from classics to new releases. Where do you start? You must narrow down the possibilities. You ask, “What kind of book does your friend like to read?” And so we need categories.

That said, Once Again defies neat categorization because its central theme is the love the characters have for each other. Yet a primary driver is the science-fiction aspect. There are important elements of suspense and mystery. The story includes Easter eggs for those who are familiar with the mythology. So if forced to choose, I would pick suspenseful sci-fi, but only under duress.

Alcove Books
You're an instructor at Lighthouse Writers Workshop here in Denver, even though you live elsewhere now. How does that work?

Yes, Lighthouse! For years I taught there in person, and those workshops were immensely gratifying, and the writers who participated in them were always inspiring. Such creative people. Such inventive minds! For the longest time, I couldn’t imagine how the energy of in-person give-and-take would translate to the two dimensions of a computer display. But it does! Amazingly, creativity thrives, even within the bounds of electronics and over thousands of miles.

Lots of Lighthouse folks are mentioned in the acknowledgements; can you extoll the literary virtues that Lighthouse offers Denver? What was your favorite or most meaningful experience at Lighthouse as a participant?

I’ve known Mike Henry and Andrea Dupree for most of my writing life. They started Lighthouse Writers Workshop more than twenty years ago, and since then, it’s grown from a single first meeting into a cultural hub of the West and a renowned international community of readers and writers. Thousands of literature lovers gather there now (virtually, for the moment) to take workshops, to develop a deeper appreciation of literature, to refine a craft, to connect with fellow book people. The community is diverse and exuberant, and it’s growing at a healthy pace.

Any favorite moments with the folks at Lighthouse?

It’s impossible to pin down just one. I started, like so many writers, by hesitantly signing up for just one workshop. When that proved to have been a good decision, I signed up for another and another. I got to know people. I went to parties. I attended readings and salons and open-mic nights. I grew as a writer. Lighthouse offers writers’ retreats that are like sleep-away camp for grownups, such as the yearly escape to Grand Lake. It hosts Writer’s Studio events with visiting authors, from emerging writers to Pulitzer Prize winners and McArthur genius grant recipients. In the summer, Lighthouse holds Lit Fest, its month-long celebration of everything literary, which is where I met my amazing agent, Sandra Bond, a lover of literature and an entrepreneur with her own Colorado agency.

You grew up in Colorado. Where, specifically, were you raised? And how does Colorado play into your writing even now?

Wherever I might find myself on this globe, Colorado is my home. My ancestor William Henry Wallace, a Union Army Civil War veteran, arrived in 1890. He founded the Colorado Ice and Cold Storage Company on land in Denver near where the Auraria campus stands now. He and his family helped to promote arts and education in the area, supporting the Denver Art Museum, Central City Opera and the Denver Public Library. Some of his children became educators, teaching Latin and history at East High School, and his daughter Mary Kent Wallace was one of the three women named Mary who founded the Kent School, which became Kent Denver and where, many decades later, I went to high school. And eventually, to bring things full circle, I graduated with a degree in Creative Writing from the University of Colorado at Denver, just across I-25 from the original site of William Henry Wallace’s ice house, and I teach now at Lighthouse, whose current location is within three miles of that same spot.

So how does Colorado play into your writing even now?

My feeling is that Colorado has always struggled to showcase its cultural assets, yet it has always been a champion of the arts, education, sports, technology and science. For example, I knew that the atomic clock in Boulder set the time standard for the entire U.S. I was slightly familiar with the work at NIST (the National Institute of Standards and Technology) before I ever had that dream about the kidnapped daughter. So when I mulled the story over in my mind, it seemed like a great stroke of good fortune that the time element I needed for the novel to work could grow organically out of the Colorado setting. I’m really pleased with the way that worked out.

One last question: You've pledged to walk for the Nature Conservancy for every copy of the book sold, through the Charity Miles program. Can you talk a little bit about how that works?

Sure, Teague. Book income is very difficult to predict, so I’m taking action in a way that I can control. When my book sells, I walk. On a positive sales day, I open the Charity Miles app on my phone and direct a sponsor to tally my steps toward a donation to the Nature Conservancy. On a really good sales day, I make it a really serious hike.

And why the Nature Conservancy, specifically?

Because it’s crucial to do what we can — right now. Empires rise and fall, economies falter and recover and despots come and go. But the fragile balance of this ecosystem in which we've evolved? Once it’s gone, it’s gone forever, and that’s something we won’t be able to reverse. Our world is a mysterious, singular, beautiful paradise, and I want some part in us preserving it — for our own sake and for the sake of the life with whom we share this world.

Catherine Wallace Hope’s novel Once Again is available now.
KEEP WESTWORD FREE... Since we started Westword, it has been defined as the free, independent voice of Denver, and we'd like to keep it that way. With local media under siege, it's more important than ever for us to rally support behind funding our local journalism. You can help by participating in our "I Support" program, allowing us to keep offering readers access to our incisive coverage of local news, food and culture with no paywalls.
Make a one-time donation today for as little as $1.