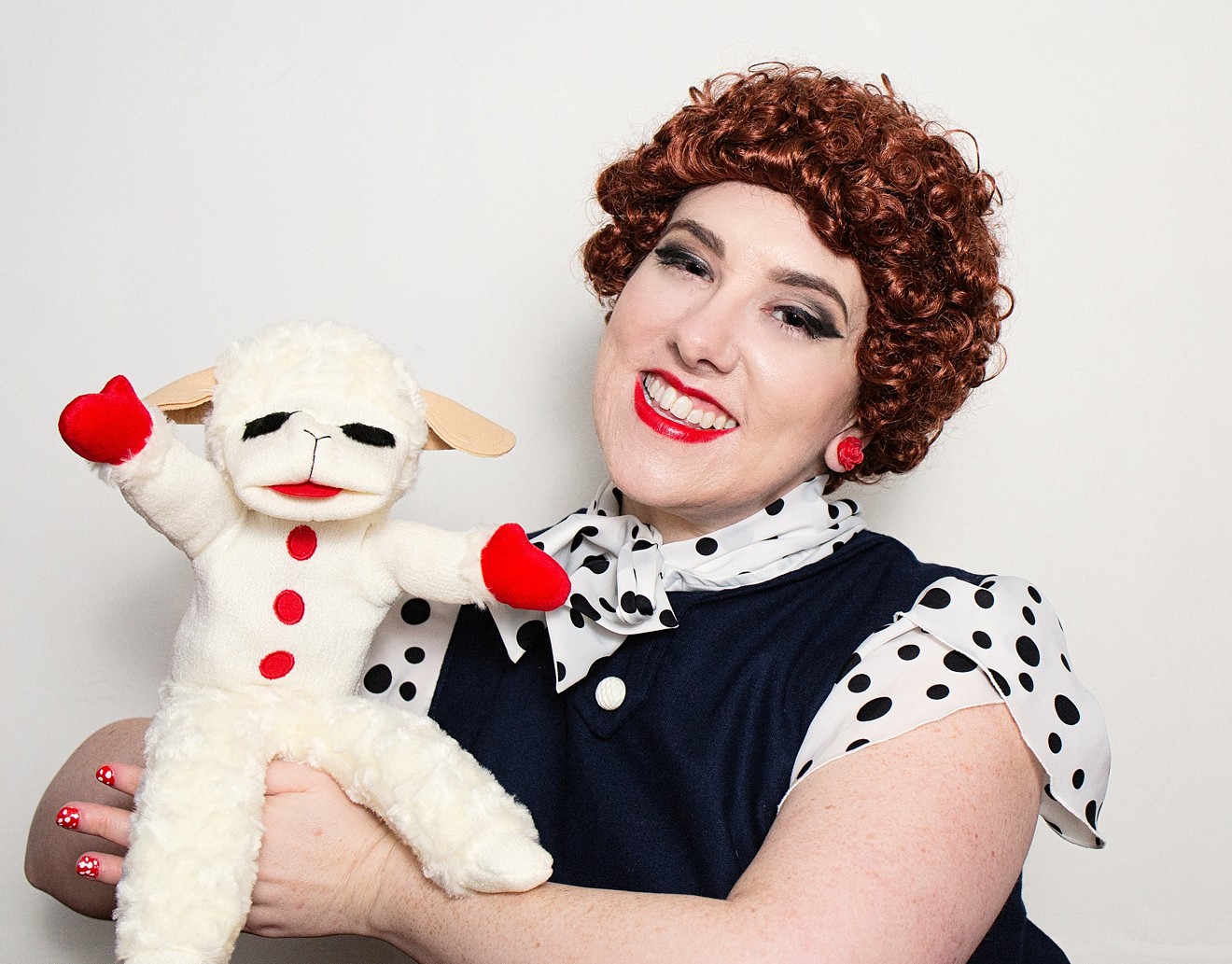 May's burlesque acts often riff on beloved childhood characters. Broken Glass Photography
Burlesque artist and show producer Polka Dottie, born Melissa May, proudly specializes in ruining childhoods. "That is my favorite thing to do," she attests. "After a show, I love when someone comes up to me and says, 'Oh, my God, you ruined my childhood!' Like, that was the point!"

May, who grew up in Denver and Aurora, has made a career out of taking nostalgic franchises from childhood and turning them into theatrical, tongue-in-cheek burlesque productions. She'll debut her latest show, the Muppets-themed Wocka Wocka Revue, on September 23, the night before what would have been late Muppets creator Jim Henson's 86th birthday.

Coming from a theater and fashion background, May was initially drawn to burlesque eight years ago, when she saw her first show at Denver's Clocktower Cabaret. "I didn't really want to be an actress; I'm not super great any time I have to talk. But I've always been really expressive with my face. So when my friends took us to a show at the Clocktower, I was like, 'Oh, my God, this is what I've been looking for. This is quiet theater. I can do all the things I'm good at and none of the things I'm bad at,'" she recalls. "At first I was like, 'I'll just do it a few times and see how it goes.' And then immediately I was like, 'Oh, no — this is my world now.'" She accelerated her training by simultaneously enrolling in two classes, one taught by recently retired Denver burlesque legend Vivienne VaVoom, and a crash course at the Clocktower aptly named Booty School.

May's new hobby quickly became a full-time job. "I need to learn to sometimes leave the hobby as a hobby," she says with a laugh. "But at the same time, it forces me to demand the respect and the pay you should be given. Because the thing with local burlesque is, you've got the gigs [where] you can get $20 and a drink ticket if you're lucky, but then you do have the ones — and of course they're harder to get — where you make $200. It's all over the place, and if you're willing to be like, 'No, I won't do the $20 ones. If you want me, you have to pay me more,' then you have more respect for yourself, and people have more respect for you."

May has been performing burlesque as Polka Dottie for eight years.
Broken Glass Photography
By 2018, May was writing and producing her own shows. "I realized that Denver didn't have the shows I wanted to see, so I was like, 'I'll just do it myself, I guess,'" she recalls. "A lot of burlesque shows tend to be slightly more of a collection of acts, and there's no rhyme or reason. I wanted something that has a theme, something that everyone knows and follows a storyline, and maybe has a script or whatever."

Her shows tend to be inspired by popular media from her childhood, such as the Muppets, "Peanuts," Disney movies or ’90s cartoons. "Nostalgia is a big thing for me. If it was something that was really important to me in my childhood, that starts the thought process. And then it has to be something that, off the top of my head, I can come up with several acts that would fit. I never want people to have to reach too hard," she explains.

Having fun themes helps May play up the comical side of burlesque, which she considers to be her niche. "I am just an awkward human being, and the good thing of burlesque is it kind of lets you work with your strengths and ignore your weaknesses. I'm not very good at the really classical, beautiful, slinky-gown type of stuff; it's just not my specialty. I find it a lot easier to be funny," she says.

Luckily, she's found that there's just as much of an audience for her campy, character-based brand of burlesque in Denver. "There's a very dedicated group of people [who] want that specifically. They want the characters, they want the funny, and they're not really interested in the classical," she says. "And there's the group that's only interested in classical, and they don't tend to come to my shows."

Burlesque's quirky little darling, Polka Dottie, aka Melissa May.
Broken Glass Photography
May originally conceptualized the Wocka Wocka Revue in late 2019, and had planned to premiere it in the spring of 2020 before the pandemic derailed her plans. She chose the Muppets because, while they were a fixture in her childhood, some of their offerings were also meant to appeal to adults.

"I really loved the Muppets growing up, and the great thing about the Muppets, especially with The Muppet Show, is that it was not for kids. Kids could watch it, but it wasn't for kids. So we can do the dirty jokes and we can do more adult things, and it's not out of character at all, because Jim Henson wanted it to be for adults," she says.

She also discovered that the Muppets had broached the subject of burlesque before: "As I was doing more research into what they already had, I found they had Lola the Fan Dancer on the show, and she danced with handheld fans. They also have a whole song, which I put into the show, about burlesque performers. It's sung by Statler and Waldorf, and they sing a song about ten terrific girls but only nine costumes. It's from an old movie about showgirls, but I was really happy when I found it. Even the Muppets were into it!"

It's critical to May that her shows strike the right balance between "ruining childhoods" with playful, boundary-pushing acts and not projecting explicit material onto childlike characters.

"That is super tricky and super important, because you never want to sexualize children. So you either want to do a character that isn't a specific age, or you want to make it very clear in some way that they are not children," she clarifies. She cites her "Peanuts"-themed Christmas show as an example: "For the Charlie Brown show, the whole point of the thing...is that twenty years in the future, Charlie Brown visits his hometown to see if he can find the love of Christmas again."

In the Wocka Wocka Revue, May will play Fozzie Bear.
Broken Glass Photography
The Wocka Wocka Revue includes sixteen different performers portraying fan-favorite Muppets such as Animal, Statler and Waldorf (who will critique each act from the theater's upper balcony), Fozzie Bear, Beaker and, of course, Kermit and Miss Piggy. While most of the cast members are burlesque artists, there will also be local actors, circus performers and a singer.

"At its core, it's a burlesque show. It's still going to have acts the way anyone would expect a burlesque show to have, but it also has a storyline running through it, so there's that theatrical element. The overall story is that you're watching an episode of The Muppet Show where quite a bit goes wrong," May hints. "So they decide to get a little creative with how they deal with that."

The Wocka Wocka Revue, 8 p.m. Friday, September 23, Bug Theatre, 3654 Navajo Street. Tickets are $30 in advance online or $35 at the door.
KEEP WESTWORD FREE... Since we started Westword, it has been defined as the free, independent voice of Denver, and we'd like to keep it that way. With local media under siege, it's more important than ever for us to rally support behind funding our local journalism. You can help by participating in our "I Support" program, allowing us to keep offering readers access to our incisive coverage of local news, food and culture with no paywalls.
Make a one-time donation today for as little as $1.