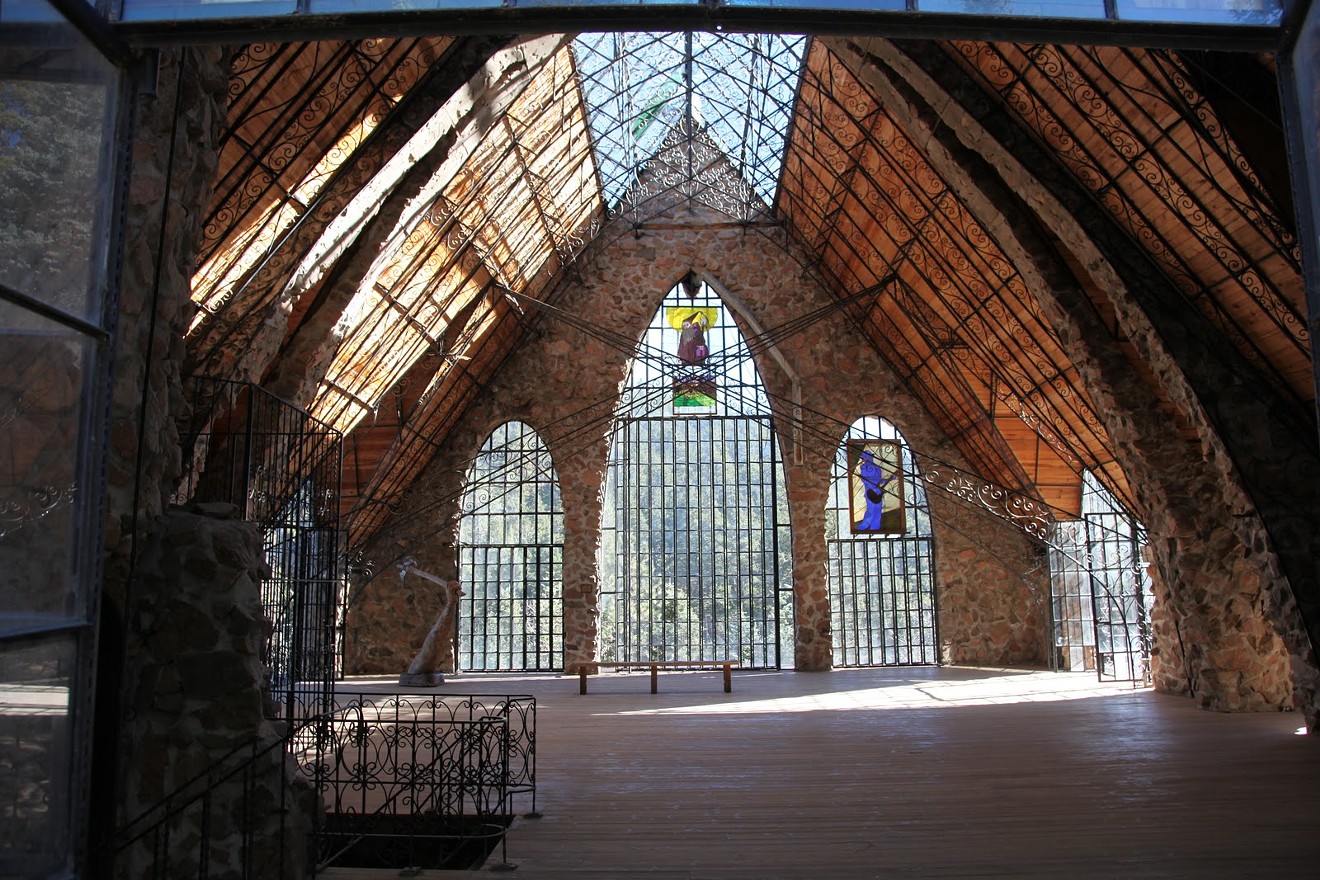 Just one of the many marvels at Bishop Castle. Bishop Castle Facebook
Well, darn: The World’s Wonder Tower outside of Genoa is closed for restoration, Grampa Jerry’s Clown Museum in Arriba is no more (and neither is Grampa Jerry Eder, who died in 2010), freaky Denver thrift shop Flossy McGrew’s disappeared with the passing of owner Suelynn Gustafson (aka Grandma Goth) in 2013, and the Swetsville Zoo near Fort Collins retired in 2019, along with funky-metal folk artist Bill Swet.

But plenty of weird, quirky Colorado attractions remain, and they’re once again wide open as pandemic restrictions ease. Here are ten far-flung destinations around the state that are ready to welcome road-trippers:

Bishop Castle
12705 Colorado Highway 165
719-485-3040
Ironworker and visionary Jim Bishop’s cathedral-like architectural extravaganza is a remarkable one-man work in progress. He bought the land, a two-and-a-half-acre parcel outside Rye, when he was fifteen, built a stone cabin there in 1969, and decided in 1972 to really challenge his stone and iron-working skills by creating a castle. Even now, at 77 and soldiering through a number of ailments, Bishop is dry-stacking walls with the help of boom trucks. The pandemic had no real impact on Bishop Castle, since Bishop kept it open; today it seems to be drawing bigger crowds than ever — including wedding parties. Bishop figures that almost 300 have taken place there over the years.

Losing his beloved wife, Phoebe, to cancer in 2018 made him sit his family down for a serious conversation about what happens to the Castle after his eventual demise: It will go to his son, Daniel, who now manages the site. “I told ’em, if anything gets broken when I’m gone, I’m gonna come back and haunt ’em!,” Bishop says. In the meantime, he’s looking for female companionship — just companionship. If he doesn’t find it, Bishop laughs, “I’m making a fully functional simulacrum of Phoebe!”

The website gives details on how to find the Castle, which is in the middle of a forest, where parking is slim. If you go, avoid holidays, plan to get there early, and take a camera.— Usually open 7 a.m. to 6 p.m., free admission, donations appreciated. Snap to it at the Colorado Gators Reptile Park.
Colorado Gators Reptile Park
Colorado Gators Reptile Park
9162 County Road 9N, Mosca
719-378-2612
This sanctuary for unwanted exotic animals started out as a tilapia farm in 1974. It still produces tasty fish, but the alligators introduced by founders Erwin and Lynne Young to dispose of the leftovers are now the prime attraction and include three rare albinos. With its geothermal ponds, the park is a rather tropical place, boasting fish tanks large and small, exotic plants and an array of non-native critters in addition to the alligators: scorpions, tortoises, iguanas, pythons and other snakes, along with a variety of birds. The place is now managed by the Youngs’ son Jay and his wife, Erin, who say they managed to stay staffed through a tough four months with the help of pandemic relief aid. The gator-wrasslin’ lessons of the past are no longer offered, but you can still buy buckets of “gator chow” to watch those monster jaws chomp down on balls of fat — from a safe social distance.— Open February 26-November 7, 9 a.m. to 5 p.m. daily. Children 6-15, seniors 65+, $10; adults 16-64, $20; younger than 6 or over 79, free.

Colorado Mental Health Institute at Pueblo Museum
13th and Francisco streets, Pueblo
719-543-2012
This fascinating time capsule of the old Colorado State Insane Asylum, built in 1879, is housed in the former residence of the hospital superintendent, on the grounds of the state’s current residence for mentally compromised individuals in the criminal justice system. At one time, the facility was a small town unto itself, with a dairy farm and other amenities to provide for the needs of the inmates. But time, social philosophy, medical treatments and budgets transformed it over the decades, as demonstrated by artifacts ranging from very old photos to antiquated restraints; there’s much more memorabilia awaiting the museum’s future expansion into an attached garage. After a three-month closure during the pandemic, director Nell Mitchell says that visitors are returning. “We’re hoping to pick up again as a conference center, but we’re not there yet,” she says.— Open Tuesdays 10 a.m.-4 p.m. or by appointment, free admission.

Town of Dinosaur
317 Stegosaurus Freeway, Moffat County
If you’re in northwest Colorado, don’t miss the tiny town of Dinosaur, population around 339. Taking the name in 1966 to feed off the nearby Dinosaur National Monument, Dinosaur is not only a great place to re-supply as you head off into the wilds, but it has street names, such as Tyrannosaurus Trail and Antrodemus Alley, that make ideal selfie settings. Plus, as all Marvel Comics fans know, Dinosaur became the hometown of Molecule Man and the site of a portal of ill omen in the October 2009 issue of Dark Avengers. But that was news to Mayor Richard Blakely: “I was already pleasantly surprised that our town survived COVID with only a few cases,” he admitted.

May Natural History Museum
710 Rock Creek Canyon Road, Colorado Springs
719-576-0450
Really, really dead bugs — enormous, tiny, exquisite, grotesquely ugly — make up the more than 100,000 preserved specimens in a collection begun by Edward May as he worked on behalf of the British Museum in the late nineteenth century. Son James and grandson John Frederick May built the museum in Colorado Springs in 1947; John’s descendants run it today. Regular exhibit rotation helps draw repeat visitors, as do new additions, such as a biographical display of John May. There’s an attached RV campground: the Golden Eagle, which — unlike the museum itself — was “screamingly busy” last year, according to one director, Diana Fruh. Afters years of advertising largely by word of mouth, like a moth out of a chrysalis, Fruh says, “We’re raising our social media presence on Facebook and Instagram.” Look for Herkimer, the giant beetle statue, for the turn-off from State Highway 115. — Open May 1-October 1, 9 a.m.-6 p.m. daily. Adults 13-60, $8; military and seniors 60+, $7; children 6-12, $6. 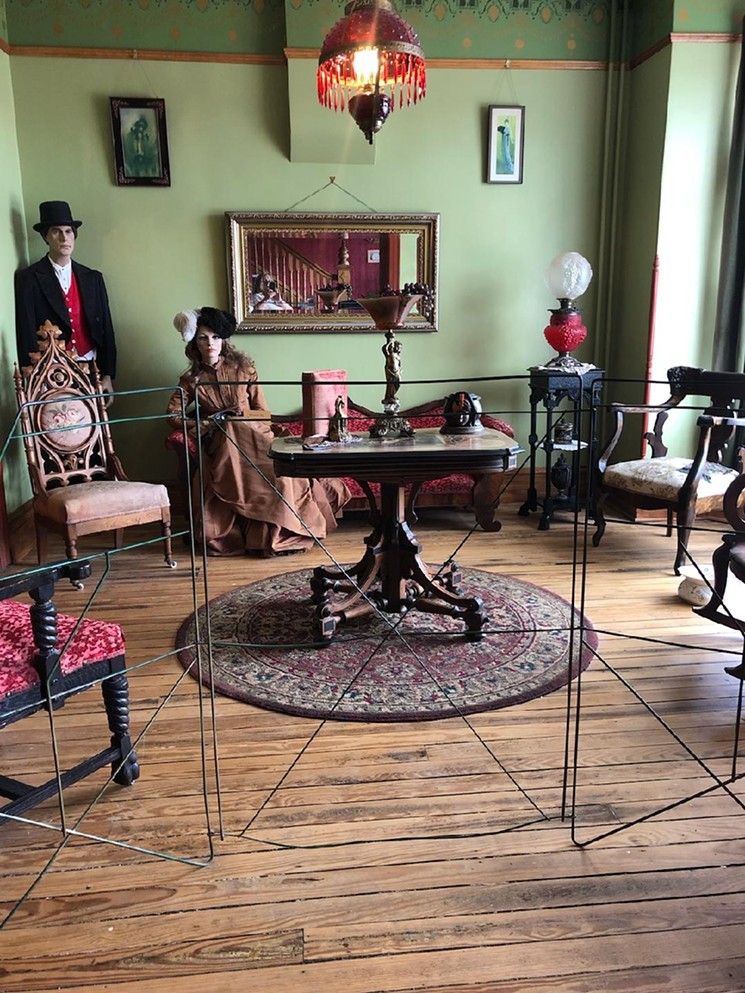 The restored front parlor of the Old Homestead House Museum .
Charlotte Bumgarner
Old Homestead House Museum
353 Myers Avenue, Cripple Creek
719-689-9090
The Old Homestead House Museum is also known as the Brothel Museum. Yes, this place pays homage to the elegant, circa 1896 “parlor house” that once serviced wealthy gents of the Wild West who could pony up $250 for an evening for entertainment. Legendary madame Pearl DeVere referred to her ten-room establishment — complete with a “viewing room” where the merchandise was displayed — as “the old homestead,” hence the museum’s name. DeVere died in 1897 of an overdose of sleep medication known as morphine; a nonprofit owns the place now. It weathered hard times during the pandemic, but visitor traffic is returning, according to manager Charlotte Bumgarner: “You know we’re back with the return of the Bed Races!” That event involves period-costumed teams pushing fancy beds on wheels down the street, and it’s part of Pearl DeVere Day, celebrated in Cripple Creek on July 24. A narrow staircase and no elevator may limit upper-floor accessibility for the mobility challenged, but the museum is family-friendly — though comfort level may depend on the word “prostitution.” — Open weekends only, Memorial Day through first week in October, 11 a.m.-4 p.m. Adults 13 and up, $7, children 8-12, $3, children under 8, free.

Museum of Colorado Prisons
201 North First Street, Cañon City
719-269-3015
The Museum of Colorado Prisons is housed in a 1935 building originally designed for women inmates, though this complex includes portions of the walls and watchtowers from the first prison established here in 1871, before Colorado was a state. In the museum, cells now showcase incarceration memorabilia spanning 140 years, including items from celebrity miscreants such as Alfred Packer and movies based on a prison riot that took place here in 1929. Relief funds helped keep the museum running fully staffed through the pandemic, though tourism slacked. Still, it’s a favorite location for paranormal investigation and professionally guided “ghost hunts” whose popularity “got us through a hard summer last year,” says director Stacey Cline. — Open May 1-October 1, 10 a.m.-6 p.m. daily. Adults 13-64, $10; seniors 65+, $9; children 6-12, correctional employees, active/retired military, first responders, $8. Sound off at the TANK Center for Sonic Arts.
TANK Center for Sonic Arts
The TANK Center for Sonic Arts
233 County Road 46, Rangely
518-789-4182
The TANK was a covert performing/recording space for sound artists and musicians until it was threatened with demolition in 2013 and fans rescued it and transformed it into a place for performance, teaching and recording. The unique arts venue is centered in and around a vintage water tank with incredible interior acoustic resonance: Any noise made inside sounds awesome. Today the TANK is a recording studio for hire and hosts regular music events, but it also invites visitors to bring their own instruments or play those supplied so they can experience the phenomenon for themselves. “We’ve had groups of strangers turn into angelic choruses when someone just starts humming,” says James Paul, executive director. A combination of pandemic relief aid and “inventing our online presence” by streaming events on the TANK’s website helped the facility survive tough times, and today Paul can say: “The TANK is good!” — Open Saturdays 9 a.m.-1 p.m., free.

Tiny Town
6249 South Turkey Creek Road, Morrison
303-697-6829
In 1915, George E. Turner, owner of a moving and storage company, built an elaborate miniature village complete with Colorado landmark buildings to entertain his daughter on the site of the old Denver-Leadville Stage Coach Station; he opened it to the public as Turnerville in 1921. The site has managed to survive floods and fire as dramatic as any that have afflicted a real Colorado town. Where there’s been restoration, it’s been done to original specifications, all about 1/6 the scale of normal architecture. There’s also a down-sized railroad for full-sized passengers to ride. Elvira Nedoma, with the Tiny Town Foundation that owns the place today, says a lot of painting and sprucing up was done during the winter months, but a full reopening was put off until public vaccinations were well under way. When Tiny Town was finally back in business at the end of May, Nedoma says, “We got slammed!” In a big way. — Open weekends in May and September, and daily Memorial Day through Labor Day, 10 a.m.-5 p.m. Children 2-12, $4; 12 and up, $5; train rides, $3.

UFO Watch Tower
Near Hooper, off Colorado Highway 17
719-378-2296
Judy Messoline, a genial rancher with a high tolerance for eccentricity, has been presiding over this campground/observation tower/gift shop since 2000. While traffic fell off during the initial months of the pandemic, “It’s been roaring back,” Messoline says. Her Peace Garden, a circle of rocks and quirky offerings left behind by thousands of visitors, is still a center of unexplained activity; writer Christopher O’Brien (The Mysterious Valley) refers to the San Luis Valley as “paranormal Disneyland.” Recently, Messoline says, she was watching Close Encounters of the Third Kind on a camper’s movie screen when observers pointed to a bright, stationary light in the northwest sky, with a small light that moved around it erratically. Both soon disappeared. Messoline can’t promise close encounters of any kind during a visit, but even without mysterious sightings, the UFO Watch Tower is a serene place with a fine mountain view and no light pollution to interfere with stargazing. — Open daily 10 a.m.-5 p.m. Camping and campfires permitted, $15 per night, per tent, reservations not necessary.