Curious Theatre Company is back...with plenty of questions. Curious Theatre Company
My first experience with Curious Theatre Company as a critic was memorable. Artistic director Chip Walton was staging Bruce Graham’s Coyote on a Fence, a complex, troubling look at the death penalty in which two death-row prisoners await execution. The date was even more troubling: We in the audience were watching a piece about the morality of the death penalty, the nature of good and evil and the meaning of compassion a week after 9/11/2001. I wrote at the time that we brought to the play “minds already over-excited by the events of the week: the deaths, the calls for an apocalyptic war against evil, the media mixture of genuine emotion and sentimentality, the loss of all sense of the world as a safe and compassionate place.”

It turned out, however, that Curious was the perfect place to be that evening — not just because of the eloquence of the production and the way it re-affirmed that art still matters even in the darkest times, but because coming together, breathing together in this intimate, vibrant space felt healing in itself. At the end of the front row, I saw director-producer Henry Lowenstein, who had escaped the Holocaust as a child and served as a kind of moral center to the Denver arts community for decades until his death in 2014. The annual Henry Awards are named for him. Henry’s very presence, seated solidly in his chair, offered silent assurance that life would go on and humanity survive.

Now, having maneuvered through the past troubling year while providing some digital content and hosting its annual summer playwriting intensive workshop, Curious has announced a full and intriguing new season, beginning September 18. As always, the roster includes conversation-provoking contemporary works, including Refuge, a world premiere created by Satya Jnani Chavez and Andrew Rosendorf and developed by Curious over two years. According to the program description, magical realism “allows this multi-disciplinary play to tackle the immigration crisis through a beautiful, unique lens.” Refuge will open in March.

“We’ve gone through a lot of staff turnover during the pandemic,” notes Walton. “In the first half, it was all about uncertainty and surviving and figuring out who we could afford and how much work there was for people.” Some staff members left of their own accord, he adds. For the rest, “it’s been weird trying to figure out the right equation. Everybody was on reduced salaries and hours, including myself. I’m sure it’s the same story every other organization has to tell. Now we’re ramping back up.”


But despite a brief period of rejoicing in the arts world when COVID seemed to be retreating and during which a few local theater companies ventured to stage in-house performances, uncertainty has returned with the surge caused by the Delta variant and the Lambda variation coming on its heels. In New York City, Broadway venues are requiring that all theater patrons be vaccinated and masked, and Walton is pondering what precautions Curious should take — and also whether his audiences will have changed over a year of absence.

“We’re still planning,” he says. “We have a fully vaccinated staff. I mean, I guess it’s all just one more question to add to the questions.... We’ve thought about everything. As of this morning, we had one set of plans; with the Broadway announcement, those plans may change. It’s really just a follow-the-leader situation. If the Denver Center doesn’t require masks, it’s hard for Curious to require them, and vice versa. It’s all about health and safety, first and foremost.”

The first medium-sized Denver company to occupy the intermediate space in the ecosystem between the multi-venue Denver Center for the Performing Arts and the lively smaller groups that came and went over the years, Curious has enjoyed remarkable stability over the past two decades-plus.  Some years ago, the company bought the beautiful old church at 1080 Acoma that houses its work and remodeled the building, creating an inviting auditorium, bright bathrooms and a charming upstairs pub. Year after year, using the motto “No Guts, No Story,” Walton has produced smart contemporary theater, with fine acting and strongly creative and professional tech — sets, costumes and sound. 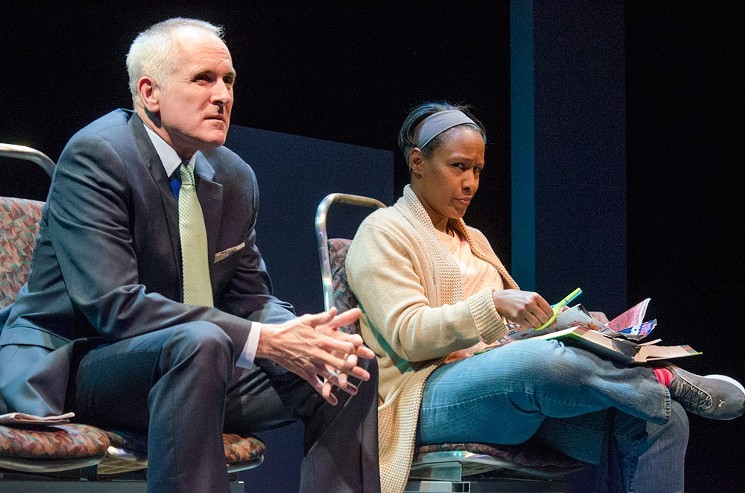 Sam Gregory and Jada Suzanne Dixon in White Guy on the Bus at Curious in 2016.
Curious Theatre Company
When passionate calls arose after the murder of George Floyd for all artists to play their role in the anti-racist struggle, Curious was ahead of the pack, having been focused since the beginning on issues of social justice and equality. Over the years, there have been many productions written by artists of color and employing BIPOC actors. Three plays by Tarell Alvin McCraney and four by Quiara Alegría Hudes were staged. Some of the finest local actors found work, including Laurence Curry, Cajardo Lindsey, Gabriella Cavallero and Jada Suzanne Dixon, who will both direct and act in American Son, opening in November. Many of these plays broke boundaries.

Another play by Bruce Graham, White Guy on the Bus, beautifully acted by Sam Gregory and Suzanne Dixon, opened five years ago and was genuinely shocking, forcing you to challenge your own preconceptions. Branden Jacobs-Jenkins's Appropriate, directed by Jamil Jude, dealt with slavery but —perhaps provocatively — utilized an all-white cast. Its truths were so deep and painful that you felt as if the skin was being raked off your face as you watched. There has, of course, also been lighter fare, like Cloud Tectonics, an early offering by Jose Rivera. It was a meditation on time and reality, beautifully staged and acted, that served as a kind of ethereal gift.

“On one hand, you would like to think our body of work speaks for itself,” Walton tells Westword. “But I know there are pretty passionate conversations happening about how that kind of work is created and who by, and who runs the organization and how those decisions are made. We are a predominantly white organization committed to doing work about social justice. The question is whether that’s enough anymore.”

As for the upcoming plays, he says, “Most of them have become even more relevant now. American Son, by Christopher Demos-Brown is about a mixed-race kid being pulled over by the cops. Two and a half years ago, when I saw it on Broadway, it was relevant; it’s triply relevant now.

“Refuge is the most exciting thing I’ve worked on in a while. We’ve invested two-plus years in creating and developing it," says Walton. “There’s a lot to be excited about.”

But he is also wondering if audiences are less likely to return not only because of the virus, but because they may have different priorities: “They may have forgotten how powerful theater shared with 200 people indoors can be."

“Someone is full of shit if they say they know how it’s going to come back,” he says. “That’s the greatest concern, and only time will tell. There are factors out of our control, and all we can do is be patient and see what happens.

“I feel like many of us in the field have paused to ask some existential questions about the future of theater," he continues. "Not just the pandemic, changes in social justice and equity. I don’t have answers, but digging into those questions is going to be a big chunk of our work."

Up until now, Walton notes, the support has been “amazing, touching. I would say maybe there’s 10 percent attrition, but I don’t even know if it’s that. The overwhelming majority who gave before have given again; the board has been amazingly visionary. The Bonfils-Stanton Foundation has given in visionary ways, too, to help keep organizations like Curious afloat. Even the U.S. government has been really great. There have been avenues of support open that were once unthinkable that really helped us stay open and have resources when we reopen. Knock on wood, we’re in really great shape due to the generosity of individuals and organizations.”

As for how Walton himself will feel when the new season opens?

“I have no idea what I will think,” he responds. “I can’t imagine it right now. Being back in that building —it’ll be a magical feeling. The thing so many of us have missed is that sense of community. No online platform can come close to replicating that. All being together and sharing a single experience at the same time. It’s irreplaceable. I know it’ll be emotional; it’ll be magical. And I’m sure there will be lots of other feelings rolling around in everybody’s hearts and brains. It will be so great to shut the door on this chapter.”

For more information, visit Curious Theatre Company online.
KEEP WESTWORD FREE... Since we started Westword, it has been defined as the free, independent voice of Denver, and we'd like to keep it that way. With local media under siege, it's more important than ever for us to rally support behind funding our local journalism. You can help by participating in our "I Support" program, allowing us to keep offering readers access to our incisive coverage of local news, food and culture with no paywalls.
Make a one-time donation today for as little as $1.