Mindfulness, meditation and cultivating inner peace have always played integral roles in Madison’s life and career. However, becoming an artist was not something she had ever considered, until she found herself starting her life from scratch after surviving a near-death experience and developing a swath of chronic, life-altering illnesses. "Joyful Beginnings," by Quána Madison.
Quána Madison
Madison first moved to Colorado to pursue an undergraduate degree in philosophy from Colorado College. Afterward, she planted roots in New York City and followed her calling to go into education, earning a master's degree from New York University. She spent about a decade in New York developing her professional teaching career before being recruited for a position at an international educational foundation in Shanghai.

Over the five years she spent living and working in China, Madison began to experience infertility issues. After the discovery of abnormal cellular growth, her gynecological oncologist recommended surgery and a return to the United States for further monitoring. Madison accepted a fellowship offer for a doctoral program at the University of Colorado Boulder, and returned to Colorado to pursue her Ph.D.

She knew that something was wrong when she experienced sudden and extreme weight loss, abnormal bleeding and extreme pain in her lower abdomen. These concerns quickly turned urgent when doctors discovered that she had three genetic markers for developing breast, ovarian and uterine cancers, and they recommended she undergo a preventative hysterectomy, an oophorectomy and double mastectomies. Several months after one of those surgeries, she experienced a rare life-threatening complication called a vaginal cuff tear and evisceration and began bleeding out.

She went into shock, and recalls that as she lost consciousness, she had a transformative, near-death experience. She could see herself lying on the floor in a pool of blood, motionless. “Every person has their own views on how we look at death and what happens afterwards,” she reflects, “but I remember being surrounded by light-beings, thousands of them. I remember feeling so much love, being held and cared for in that moment, and being told, 'There is no reason to be afraid, you are not alone.’... And then I was told, ‘You’re going back in your body now. It’s not your time. You have purposes to still fulfill in this life, so you’re going back.’”

Many miracles occurred that day in order for Madison to survive. However, the aftermath brought an onset of multiple chronic illnesses and pain. “[I went from] working sixty-hour weeks before I was sick to being so fatigued and in pain that the act of getting out of bed took most of my energy for the day,” Madison recalls. “All the things I used to do and sought to pursue, suddenly I couldn't do anymore. I had to learn how to live in my changed body — and how to deal with all the mental health issues that came with the changes to my health landscape, too.”

She dropped out of her doctoral program, was unable to work, became financially destitute and experienced housing insecurity, and lost her health insurance. Madison found herself starting from scratch while navigating her disorienting, challenging and overwhelming health issues. 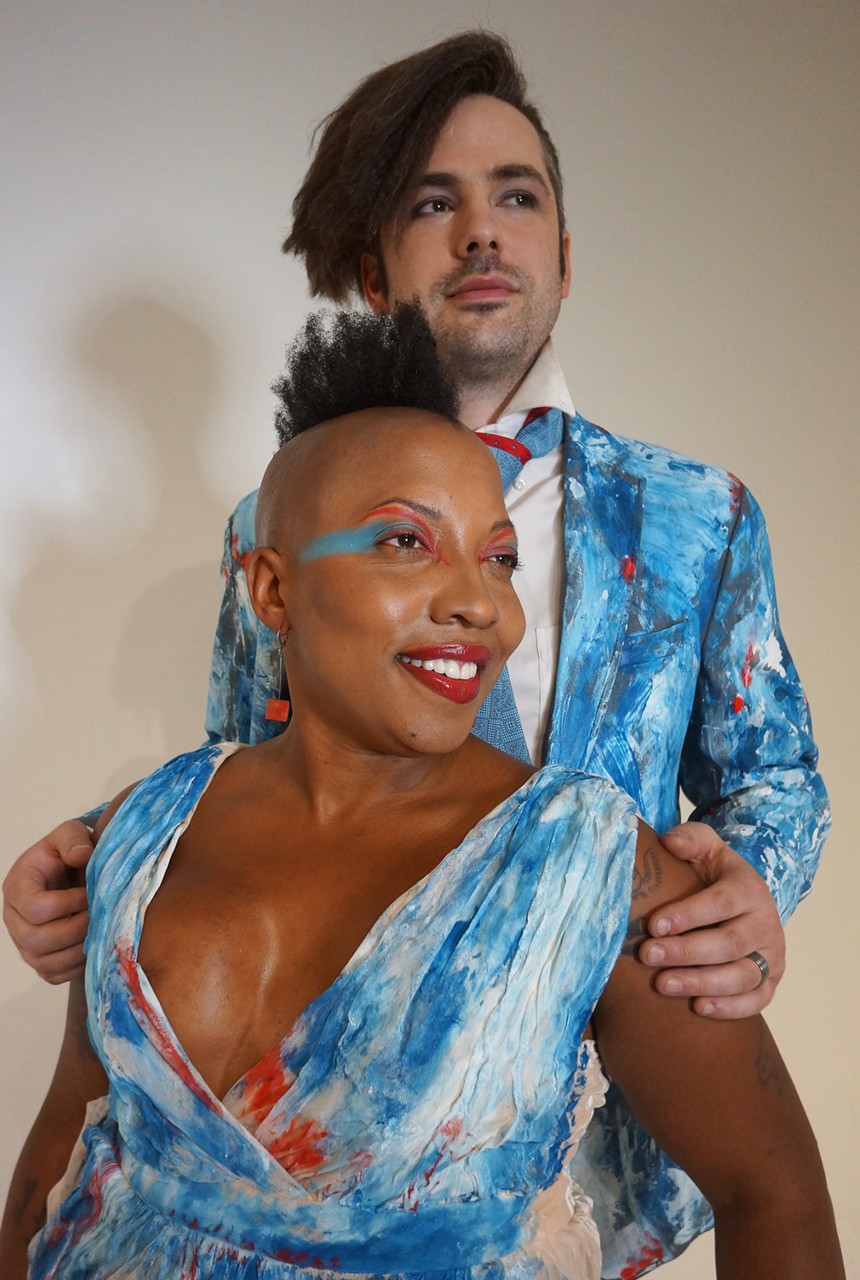 Quána and husband Zachariah White modeling painted fashion designs by Quána Madison for the Sustainable Fashion runway show at Void Studios in Denver.
Sabrina Montoya
It was at this time that she began venturing into the arts and culture communities in Denver. Madison remembers some of her first dates with her now-husband, Zachariah White, going out to local musicians’ shows and to the galleries in the Art District on Santa Fe. And while there were days when she couldn’t even walk, the creative spaces and people uplifted and inspired her.

She recalls how such interactions began to ignite a feeling of motivation that she had not felt before. “It’s one thing to survive something and to keep chugging along to just try to cope. But art brought my soul back to life,” Madison says, adding that Denver started to become her "healing home."

One day, after a particularly demoralizing emergency room visit, White took Madison to Meininger Art Supply in an attempt to cheer her up. She remembers her hands were shaking from convulsions she was experiencing at the time, but the staff took all of the time necessary to help her explore and test out materials that she could use. “They made me feel good in the space,” she recalls. “Instead of being annoyed or invisibilizing [my disabilities], they were working with them.”

She was so inspired that she decided to try to work part-time at Meininger, and soon found herself falling in love with the art supplies and the community. She met and connected with such local artists as Mike Graves, Jaime Molina and Adri Norris, who gave her inspiration and offered her advice and encouragement as she started taking steps to express herself as an artist.

Madison remembers that she sold one of her first paintings at a staff exhibit. It was an abstract self-portrait, a depiction of her “inner Buddha.” It's now a recurring theme in her work, and she uses the phrase as a visual mantra — a way to imagine peace, even when her body is not feeling it. The gentleman who bought the painting told her that he was battling pancreatic cancer and that he felt inspired by the piece even before Madison shared her story with him.

“That was one of the first moments where I was like, 'Wow, I can make art for myself to help me cope…but also, I can create artwork that can nourish the well-being of somebody else,'” Madison recalls. The moment served as motivation for her to continue creating artwork and inspired her to begin mounting arts experiences for others.

Throughout her ongoing recovery process, Madison has grown immensely as an artist, and has built a rich and diverse career for herself in the creative fields. She worked at the Still Museum from August 2019 to October 2021, then took a break before rejoining this past August. In addition to her work there, she utilizes her background in education by facilitating expressive arts-based workshops to promote mental wellness for private clients as well as organizations including Colorado Artists in Recovery and the Denver Botanic Gardens.

“Sometimes it’s about healing,” she says, “and other times it’s about creating community space for folks to practice inner peace together in creative ways. Because even if you don’t identify as an artist, everybody has creativity that comes out in different ways.” 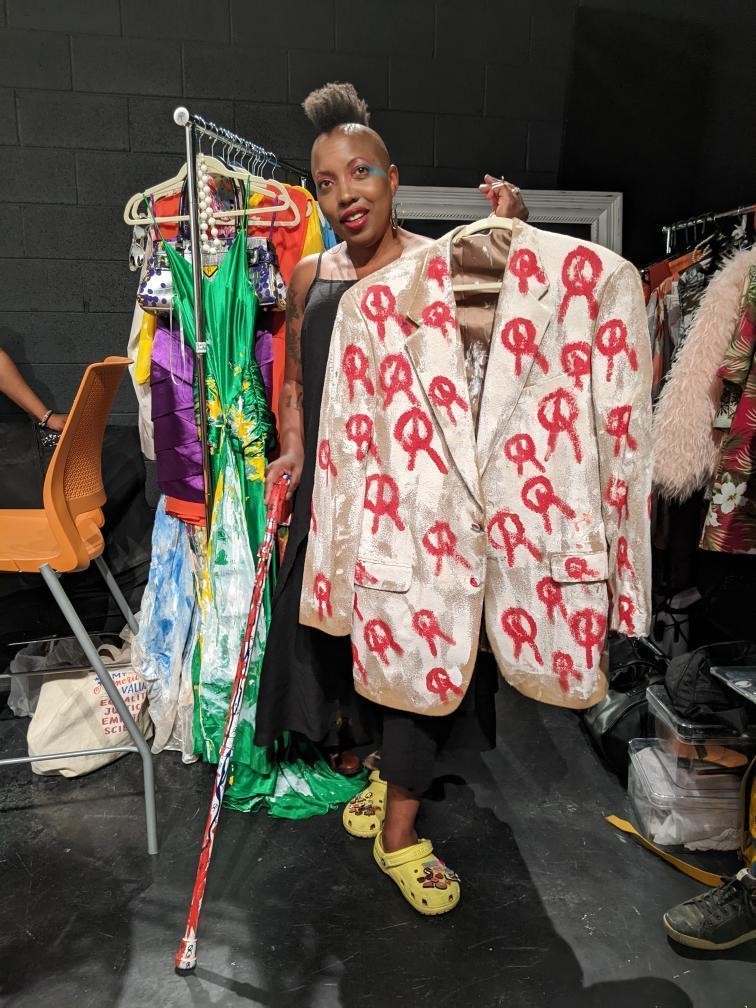 Quána Madison holds one of her painted blazer designs that was part of the Sustainable Fashion runway show at Void Studios.
Sabrina Montoya
Through her themes of compassion, hope, resilience, courage and rediscovering joy despite challenges, Madison’s work serves as a guiding light for others experiencing similar challenges. “I identify proudly as an artist with invisible disabilities,” she says. “I value increasing the visibility of artists, models and designers with disabilities, because we add valuable perspectives. I hope increased awareness can expand advocacy, accessibility and inclusion efforts for creatives with disabilities in a variety of spaces.”

Madison’s fine art is represented by ArtLifting, a Boston-based firm that provides a platform for artists with disabilities and with housing insecurity; through that platform, her work has been acquired by Google and Bank of America. She is also represented by Wilhelmina Denver for modeling and on-camera work, and is a subject in an upcoming documentary called The Great Now What, which aims to tell the stories of disabled women artists, combat ableism and inspire art-making as a form of healing.

Madison’s own healing journey continues as she balances her complex illnesses with her many artistic endeavors; she is currently focused on creating more paintings and writing a new book. She and her husband recently moved into a new house built by Habitat for Humanity, and she is basking in the gratitude of feeling at home in Denver and living a longer life.

“Denver’s blossoming cultural arts scene is special to me,” Madison says. “There are many artists, community spaces and arts organizations making powerful impacts by using the arts to nourish health and well-being in our communities. We’re lucky to be in a city with a dynamic arts and cultural scene, and I think it will only grow.”

Find out more about Madison and her work at quanamadison.com.
KEEP WESTWORD FREE... Since we started Westword, it has been defined as the free, independent voice of Denver, and we'd like to keep it that way. With local media under siege, it's more important than ever for us to rally support behind funding our local journalism. You can help by participating in our "I Support" program, allowing us to keep offering readers access to our incisive coverage of local news, food and culture with no paywalls.
Make a one-time donation today for as little as $1.