"Grown Ass Ladies" Say You Can Do Burlesque at Any Age Bella Fire in a "Burlesque Bingo" performance. Photo by Tim Hunter
Turning forty is a milestone birthday, but for many women, it can be daunting. That's why burlesque performer and powerhouse singer Cora Vette (Reyna Von Vett) wanted to put together an event that shows how women in their forties aren't even close to the sexual irrelevance that society prescribes.

"Most of the best performers in burlesque are over forty," she points out ahead of her Grown Ass Ladies Burlesque Weekender event at the Oriental Theater on Saturday, September 10. Vette started thinking about creating a show like GALS back in 2017 and put together a lineup of performers, with a night booked at the Oriental in August 2020. (Surprise: That show didn't happen.)

This weekend, her vision will finally come to life with singing, comedy and, of course, burlesque performances by some of the sassiest, most seasoned women you'll find on any stage, including performers from Denver, Las Vegas, Vancouver, Austin, San Francisco and all over North America.

Local burlesque performer Bella Fire (Shelly Ray) was a fitness instructor and mathematics professor before enrolling in a jazz burlesque class after a friend told her she had lost her "spark." It's not a stretch to say that it was a life-changing experience. Her introduction to burlesque eventually inspired her to leave a "very controlling" relationship and, as she puts it, embark on a "self-reclamation process." She now travels all over the country to perform and compete in burlesque shows. 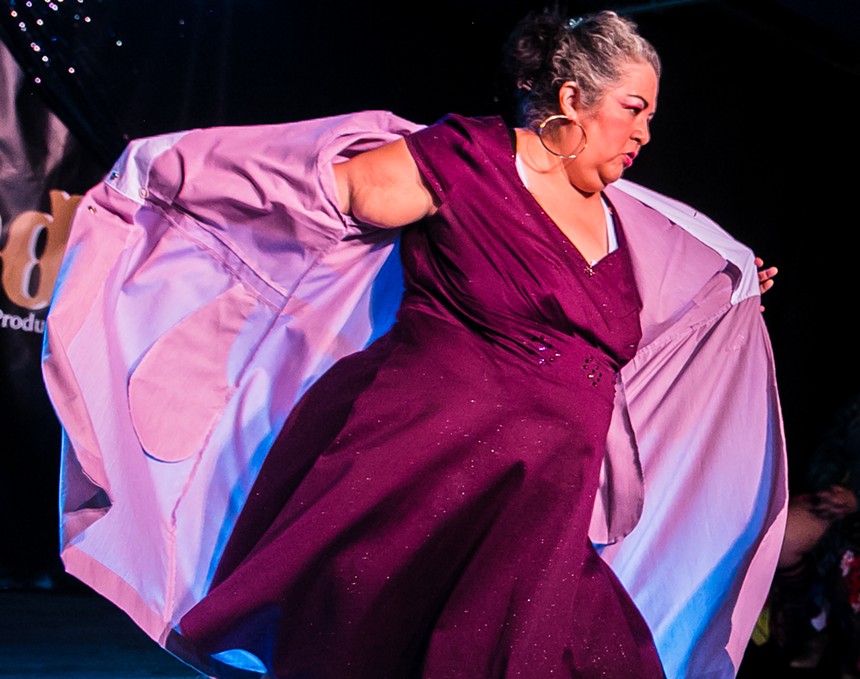 Lady Peacock as Maria the Maid
Photo by Broken Glass Photography
"There was a transformation in how I felt about myself and how I saw myself," Fire says today. After retiring from her teaching job, she threw herself into performing and modeling full-time, including dabbling in acting. "I was balancing this duality in my life; there were very few people in the academic world who knew what I did on the side," she explains. Now she gets to be Bella Fire as often as she wants.

"All of the pieces of myself I had put away because they were 'too much' for the person I was with. I found that they're not too much; it was just not the right person for me. It didn't fit anymore," she recalls. "It was better for me to unpack those pieces of myself."

Her performance at the GALS Weekender is, she says, an homage to her journey and how much she's learned about herself through burlesque.

Lady Peacock (Jaime Lujan) came to burlesque through a different route: An actress for several decades, she discovered her burlesque alter-ego after returning from a costume party one night. "A friend had done some body painting on me, and I had a new Mac computer, and I did all kinds of really cool self-portraits on the Mac," she remembers. "I was looking at some and thought, 'That one looks like a showgirl.'"

She thought it might be fun to create some kind of one-woman show around that character, so she started taking some burlesque classes. And then "I caught the glitter bug," she says.

As a theater artist, "I've been doing burlesque my whole career," Peacock notes. "It's about bringing political issues to the forefront and making fun of it."

Bella Fire
Photo by Will Strong
That's the inspiration behind the act she'll be performing at GALS, which she refers to as "Maria the Maid." Peacock begins the performance in a domestic worker's smock, hauling cleaning supplies around the stage before revealing a sultry purple dress underneath her maid outfit. In the maid's mind, she explains, she's Maria from West Side Story.

"Then I take that off, and inside is my inner chola — my Dickies and my suspenders and tennis shoes and all that, and my T-shirt," Peacock says. "Then I rip all of that off, and the lady of the house comes back and finds me in my pasties and underwear."

Performed to the tune of Santana's "Maria Maria," the act also involves broom air guitar and a message: "This act pays homage to all of our abuelas, mamas, tias, hermanas, amigas — and ourselves — that have ever worked in the service industry as a maid, cook, nanny, caregiver, etc.," Peacock says.

"This is one of the things that I like about burlesque: I can sneak a little political message into it," she adds. The "service industry" might indicate a money-earning job — or it might mean unpaid domestic labor for loved ones.

Both Fire and Peacock are relatively "late" arrivals to the burlesque world, experimenting with the performance art after they turned forty. And to share the stage with so many noteworthy and lauded performers is a bit of a dream come true.

"To be among the ranks and included, you feel a little bit like you've arrived," Fire says. "I'm 51 now, I'll be 52 in a few short months, and I feel like I'm living my best life. I get to decide what's good for me — not society, and not men."

And the additional experience means that these performers all have that special sauce that makes burlesque so much fun to watch. "I think because we're older, we go into it with a little bit more self-confidence," Peacock says. "I don't think I would have done this in my thirties. Even though it's fun to watch, I don't know that I would have taken that leap."

They're also both grateful that wider social sentiments seem to be shifting to include a wider definition of beauty. "When I go watch burlesque and I see a larger woman, we don't think, 'Look at that bulge,'" Peacock adds. "We think, 'Look at how amazing and gorgeous she is.'"

Lady Peacock
Photo by La Photography
This is an experience that Vette hopes to showcase at the GALS Weekender. "Women over forty are not represented or seen on stage," she explains. "There was a question if we should include men over forty, but there's plenty of work for men who are getting older. They don't carry the same stigma."

Representation matters in burlesque as much as anywhere else. Not everyone wants to get up on stage, but everyone likes to relate to the performers up there — and seeing someone similar might nudge a future burlesque star into taking their first artful-striptease step. By making burlesque more open and available to everyone, these women are redefining what it means to be "sexy" at any age.

Peacock remembers an act she put together early in her burlesque career, one paying homage to Oshun, the Yoruba river goddess frequently affiliated with fertility and love. She saw a friend who used a half-corset in a different performance and decided she'd like to try using one, too, to help cover her midsection.

"Then I go back and watch the video, and I'm trying to do this Afro-Cuban dance in a corset," she recalls. Not only did the garment look strange, but Peacock says she couldn't actually move and dance the way she needed to for that piece.

"So it was like, 'Are you going to take off the corset? Are you going to embrace what you're saying here, about bodies being beautiful?' I had to have that conversation with my own self and my own self-esteem," she says. That meant the corset had to go, at least for that particular number.

"You're putting yourself out there," agrees Fire, and that can be frightening for a woman of absolutely any age. "You have to be vulnerable, and not everybody is kind — 'You're too old or too mature, or too this or too that.'

"That's one of the things I think women are, hopefully, starting to ignore," she concludes.

GALS Weekender, Saturday, September 10, 7 p.m., Oriental Theater, 4335 West 44th Avenue. Tickets are $25-$35.
KEEP WESTWORD FREE... Since we started Westword, it has been defined as the free, independent voice of Denver, and we'd like to keep it that way. With local media under siege, it's more important than ever for us to rally support behind funding our local journalism. You can help by participating in our "I Support" program, allowing us to keep offering readers access to our incisive coverage of local news, food and culture with no paywalls.
Make a one-time donation today for as little as $1.