Ten More Things to Do in Denver This Weekend and Beyond

This Spookadelia will be even spookier than the 2019 version. Aaron Thackeray
Are you spooked? This weekend is full of events dedicated to female serial killers, with the debut of Lizzie at the People's Building, as well as the start of Audacious Theatre's Lady Killers. But there are also far less somber celebrations, including the kickoff of Su Teatro's fiftieth-anniversary year.

Check our list of free events here, and keep reading for the best ticketed events in Denver this weekend:

Mile High Horror Film Festival
Through Wednesday, October 13, online
Be afraid. Be very afraid. The Mile High Horror Festival is back, but it's virtual this year, allowing you to stream new horror, thriller and sci-fi films from around the world, along with Q&As with filmmakers and special guests. "There are so many fantastic new horror, thriller and sci-fi movies,'' says MHHFF co-director Timothy Schultz. “We are extremely excited to shine a light on them.” Get all the details, as well as passes, here.

Run the Rocks 5K/10K and Family Fun Run
Sunday, October 10, 7:15 a.m.
Red Rocks Park and Amphitheatre
Get in on the only sanctioned, timed road race at Red Rocks, now in its fifteenth year. The runs include a 5K, a 10K and a family fun run; bands will play on the roads around the course to encourage runners. It's a benefit for the American Lung Association; find out more here.

The Clyfford Still Museum, art in itself.
DAF

Doors Open Denver
Sunday, October 10, for in-person tours
Around town and online
Doors Open Denver is back through October 17, with a combination of a dozen virtual tours available on demand and four in-person tours per day on the weekend. You can visit the Clyfford Still Museum, the Historic Elitch Theater, the Historic 11th Avenue Hostel and the U.S. Olympic and Paralympic Museum, among other places, but tickets — $25 for members of the Denver Architecture Foundation and $30 for non-members — are limited. Get all the details and tickets here.

Spookadelia 4: The Curse of Novo Ita
Sunday, October 10, 11 a.m. to 8 p.m.
Spectra Art Space, 1836 South Broadway
Spookadelia is back at Spectra Art Space.The Curse of Novo Ita is the immersive, introspective fourth installment of the Spookadelia Series from the artists, makers and mover-shakers who brought you Novo Ita and Spookadelia 1,2 and 3, along with some new surprise artists making their Spookadelia debut.
"Guests who are brave enough to help lift the curse of Novo Ita will have to learn the art of rift walking and reassemble the artifact needed to save the city," organizers promise. "They will face many trials as they travel into the home of lost souls known as the Dimension of Mirrors, surpass the allure of power and wealth on the Plane of Fallen Kings, and come face to face with the darkest realms of themselves in the Miasma of Inner Monsters. Once they have assembled the artifact, they will use their newfound magic to lift the curse of Novo Ita." Okay, then! The show runs Wednesdays through Sundays through October 31, and tickets are $30 ($12 kids); book your time here.

Giselle
Sunday, October 10, 2 p.m.
Ellie Caulkins Opera House
Colorado Ballet, which is celebrating its sixtieth year, has opened its in-person season with Giselle, which continues through October 17. There are still tickets for the matinee; get them here.


El Corrido del Barrio
Sunday, October 10, 2 p.m.
Su Teatro Cultural and Performing Arts Center, 721 Santa Fe Drive
As Su Teatro celebrates its fiftieth year, the company led by Tony Garcia is bringing back what’s become its cornerstone production: El Corrido del Barrio, the story of how the Auraria neighborhood was felled by a wrecking ball to make way for what’s now the Auraria campus. Su Teatro has come a long way from a roving band of Chicano activists performing political skits in the street, and Corrido only gets richer with time as a shining symbol of the lost community that was centered around the iconic Saint Cajetan’s Church. Performances continue through October 24; find the complete schedule and get tickets, $17 to $20, here.

Elephant
Sunday, October 10, 2 p.m.
The Bench at 40W, 1560 Teller Street, Lakewood
Elephant, a “devised” work by Abner Genece, Candace Joice and Neil Truglio, takes cues from the writings of Frederick Treves, the doctor who befriended Joseph Merrick, a real-life character known to theater fans as the Elephant Man. But Benchmark Theatre’s world-premiere performance takes a leap and a metaphoric left turn to instead focus on the history of racism and otherness endured by Black Americans, as seen through Treves’s lens of understanding. That’s a cool trick. the program continues through October 30 (and Mondays are industry nights); get your tickets, $15 to $30, in advance here. 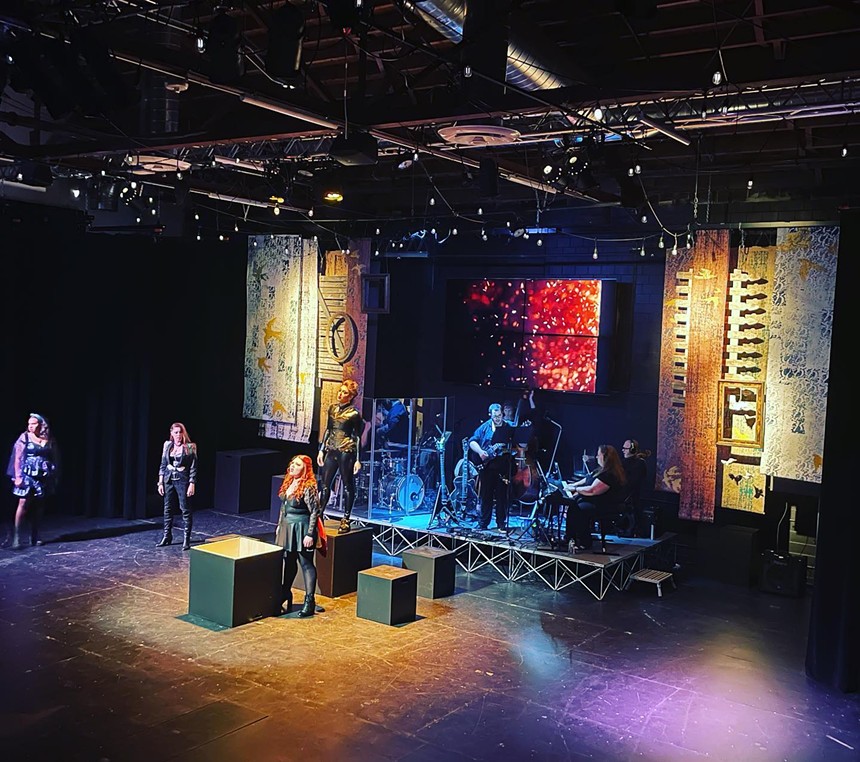 Lizzie rocks at the People's Building.
Forge Light Theatreworks
Lizzie
Monday, October 11, 7:30 p.m.
People’s Building, 9995 East Colfax Avenue, Aurora
Before dismissing Lizzie as a good old true-story melodrama about the woman who notoriously gave her mother and father forty whacks each with an ax in 1892, think again. The musical with a rock score turns out to be fronted by a six-piece band led by four angry women. Will there be murders? Absolutely, but there will be plenty of musical backup, too. The show runs through October 31; find the complete schedule and get tickets, $20 to $35, here.

A Conversation with Stacey Abrams
Wednesday, October 13, 7:30 p.m.
Paramount Theatre, 1621 Glenarm Place
Fans of Stacey Abrams think she’s invincible, smarter than the average politician and a person who should be president, and that's not just a pipe dream. Abrams, whose voting rights efforts in Georgia helped put Biden in the White House and Democrats Jon Ossoff and Raphael Warnock in Congress, is certainly one of the most powerful women in American politics now. Not only that, but she writes romance novels and thrillers, too. No doubt her conversation with journalist Gloria Neal will be full of insights, hard facts and attainable dreams. Tickets start at $44.50 at Ticketmaster; grab ’em here if you can.

The Lifespan of a Fact Post-Show Discussion
Wednesday, October 13, 7 p.m., online
The Lifespan of a Fact has been wowing audiences at Curious Theatre Company. On October 13, Curious will host its first-ever post-show discussion with essayist John D'Agata, along with Artistic Director Chip Walton, Director Christy Montour-Larson, and cast members. Click here to register for the virtual discussion. Haven't seen the show yet? Get tickets here.


Know of a great event in Denver? We'll be updating this list through the week; send information to [email protected]
KEEP WESTWORD FREE... Since we started Westword, it has been defined as the free, independent voice of Denver, and we'd like to keep it that way. With local media under siege, it's more important than ever for us to rally support behind funding our local journalism. You can help by participating in our "I Support" program, allowing us to keep offering readers access to our incisive coverage of local news, food and culture with no paywalls.
Make a one-time donation today for as little as $1.