Brian Fouhy's installation of found TV sets and videos in Delirium at RedLine. Robert Delaney
After visiting Houston's FotoFest, photographer Mark Sink decided that Denver needed something similar, and he mounted the inaugural Month of Photography in 2004. At first, MoP was an annual event, but that put too much pressure not only on Sink but on the city’s exhibition venues, so it transitioned into a biennial.

Denver's MoP now sprawls over several months, with exhibits, lectures and other events centered on photos and photo-based works of art. Although there's an unbelievable number of MoP shows around town right now, there's no official exhibit serving as the main attraction. Inevitably, the shows that Sink himself curates have come to be regarded as the de facto central exhibitions, including Delirium, Three Visions, currently at RedLine.

For this unofficial “official” event, Sink recruited young photographers George P. Perez and John Lake to co-curate the show with him. Some of the artists they chose are up-and-coming Colorado photographers, and a couple of them are RedLine residents. They found several while studying trends in contemporary fine art photography and looking at exhibition catalogues and books, while others were discovered on Instagram. Photographers from around the world are represented, some with international reputations. The co-curators all chose their own rosters, and then the three points of view were mashed together. As a result, the show has no clear through-line or narrative, but it works as a compendium of new directions in photo-based work. 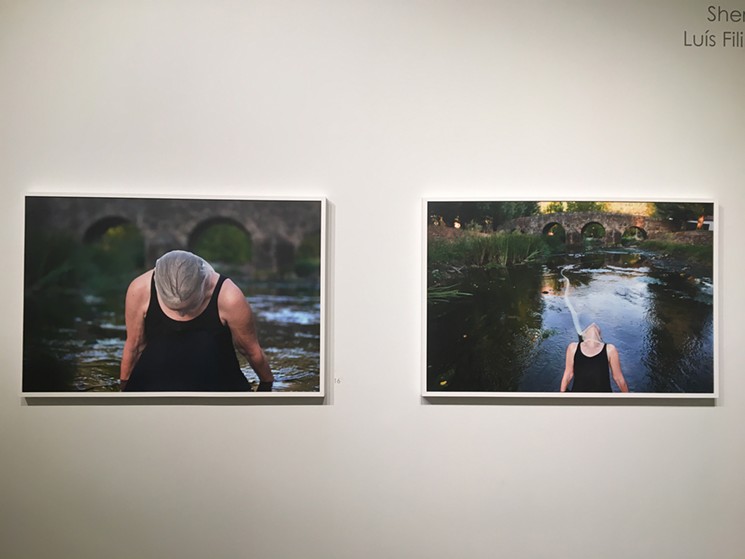 Performance images by Sherry Wiggins and Luis Filipe Branco in Delirium at RedLine.
Robert Delaney
There are sub-themes that are more or less coherent, however, like the many artists who have supplemented their photo practices with artist-books, zines and pamphlets. In a related development, some embrace three-dimensionality in their otherwise photo-based pieces, such as those in which photos are printed onto rigid cloth or other sculptural surfaces. In a sense, this shift to the object is the most unexpected idea that emerges from Delirium: In various ways, artists are reacting to the ubiquity of transitory images on social media by making actual things. Those images on our phones and pads have no physical form aside from pixels on a monitor, so one way for an artist to checkmate that ephemeral situation is by making solid things that exist in the physical world. 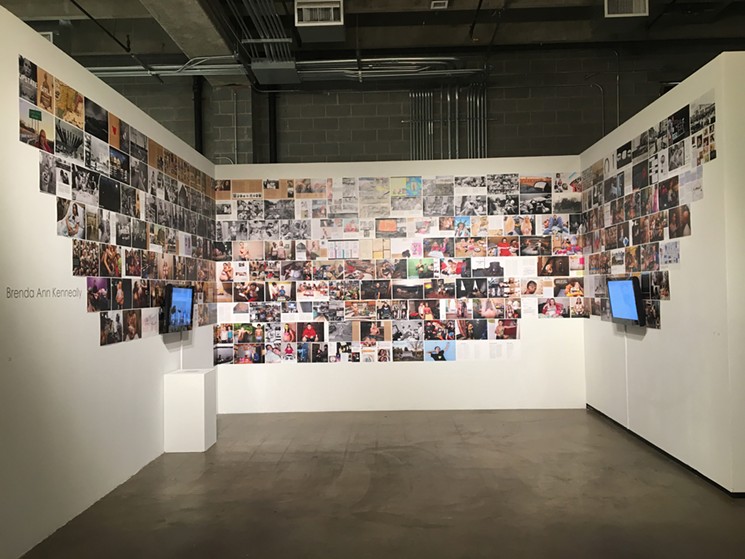 Brenda Ann Kenneally's deconstructed "Upstate Girls" in Delirium at RedLine.
Robert Delaney
Foremost among the photographers using archival approaches is Brenda Ann Kenneally, who has created an installation out of a deconstructed book; her “Upstate Girls” looks at people in poverty in Upstate New York. The pages of the book have been tiled on the walls in a complex constructivist arrangement; the photos on the pages are beautifully composed and often poetically posed, and the young women and their young boyfriends have a freshness despite their downbeat lives. But the photos are about more than how sharp they look, since they principally address ideas about class inequality, giving the viewer emotional triggers.

A similar effect is seen in the photos and artist-books by Kit Ramsey that take on the street life of Philadelphia, where he lives. Junkies are a big part of the story, with one photo depicting a close-up of an addict’s arm with the hypodermic needle still attached; in another, a pal of the artist's is seen shooting up in the foreground. In one shot there’s even some levity, if you can call it that, where a dildo has been ceremoniously placed in a tree that hangs over an outdoor shooting gallery. Like Kenneally’s images, the Ramsey photos are composed in such a way as to exploit the inherent beauty of the depicted forms, with an inspired sense for framing, which is conceptually undercut by the dark and disturbing subject matter. They are fabulous. 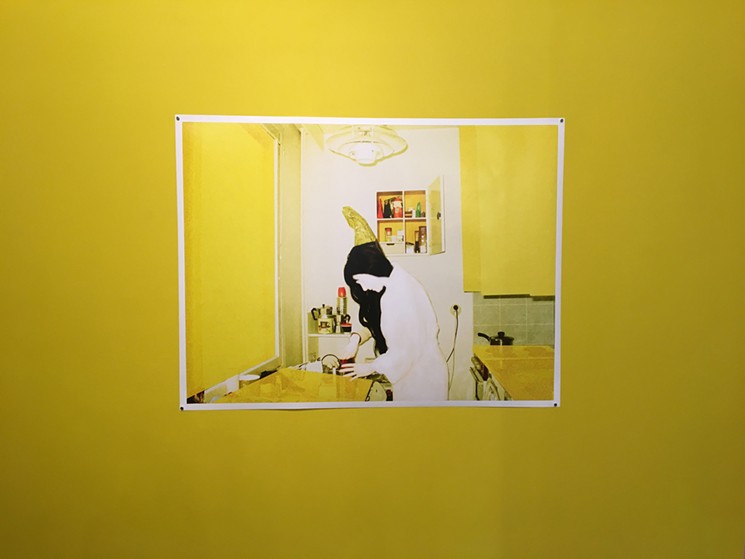 Inkjet enlargement by Marja Saleva in Delirium at RedLine.
Robert Delaney
A standout among the sculptural pieces is the pyramid of eleven television sets illuminated by video loops of eyes, mouths and words running on their screens. The piece is by Brian Fouhy, who also works in commercial art. It’s really sensational, tipping its hat to pioneering work of a similar type by Nam Jun Paik, while simultaneously looking like its own thing. Also having the substantial appearance of furniture are Colby Deal's heavily touched-up photo-enlargements of African-Americans, set in heavy frames made from found moldings. The surfaces of the photos have been heavily worked with varnishes and washes, giving them a weathered, antique look, a characteristic enhanced by the found woodwork. 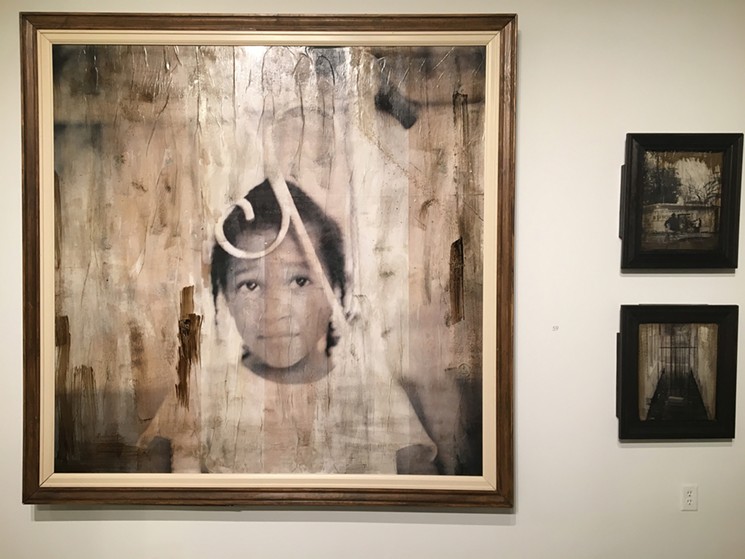 Conversely, being insubstantial is the defining characteristic of a photo by Micah Danges that’s been printed on cloth mesh and hangs from a rod sticking out from the wall; the piece laps over itself so that two parts of the image are seen at once, in a double layer that produces a moiré effect. Depicting plants and a plastic device of some kind, it’s delicate, lyrical and fairly Rauschenberg-ian. The density of the double image is in complete contrast to the artist’s nearby black-and-white monochromes, which are characterized by their blankness and flatness. Also trading on flimsiness is Magali Duzant's deep-blue cyanotype banner with watery imagery that hangs to the floor. Owing to the nature of cyanotypes, the photographic image taken from a slide continues to develop during the run of the show, so the viewer catches it as it is being made. Duzant also links back to the show's archive angle with a set of simple notebooks concerning the word blue as expressed in various languages.

Since Delirium is not tightly organized, many pieces may seem like non sequiturs, but are strong contributions to the whole, anyway. The set of crudely altered still-life photos by Gregory Eddi Jones are among the standouts. Taking appropriated images of vases with flowers, Jones employs digital painting programs to “draw” over them in a childish style, using Crayola colors and printing up the results. The grid of inkjet prints have been tacked to the wall around a shelf with a booklet perched on it.

Considering that it’s meant to be a celebration of MoP, it's amazing that so few examples of traditional photography are included in this show.

When I walked through it with the three curators, Sink told me that after fifteen years, he's stepping away from his MoP leadership role. He wants new voices, he says, which is why he worked with Perez and Lake on this exhibit. For the next rendition in 2021, Samantha Johnston, the director of the Colorado Photographic Arts Center, will be in charge. “To continue to grow, MoP needs to be monetized, and it definitely could be, but I can’t do that, because I don’t know how,” explains Sink. “But CPAC and Samantha have shown that they can.”

Delirium, Three Visions, through April 7, RedLine, 2350 Arapahoe Street, 303-296-4448, redlineart.org.
KEEP WESTWORD FREE... Since we started Westword, it has been defined as the free, independent voice of Denver, and we'd like to keep it that way. With local media under siege, it's more important than ever for us to rally support behind funding our local journalism. You can help by participating in our "I Support" program, allowing us to keep offering readers access to our incisive coverage of local news, food and culture with no paywalls.
Make a one-time donation today for as little as $1.