A Party to Die For: Talia Tucker L'Whor's Murder-Mystery Nights

Talia Tucker L'Whor is a character-based drag artist from Denver. Nosferatune
As someone who describes herself as a "fashion clown," it's only fitting that drag queen Talia Tucker L'Whor (aka Tucker Ellsworth) did drag for the first time on April Fools' Day.

"April first was my fourth [drag] birthday. The surprise on my parents' face when it turned out not to be an April Fools' joke!" she recalls with a laugh.

The Denver native has been performing around the city for the past four years, but 2022 is looking like her biggest year yet. Last fall, Tucker L'Whor introduced a series of murder-mystery nights at Middleman, where attendees were instructed to come as a certain character, complete with outfit suggestions, personality traits and scandalous backstories. Over the course of two hours, the audience members question each other to solve a series of murders, under the guidance of Tucker L'Whor. The murder-mystery nights have become a huge success, selling out consistently, and now she's hosting them at four different venues. Tucker L'Whor hosting a murder-mystery night at Middleman.
Nosferatune
"Bring your debonair best," hints Tucker L'Whor, "and by the end of the night, three of you will be dead."

While she originally began her drag career with a different stage name, she changed it in 2020 to close the gap between her drag persona and out-of-drag life. "I was feeling very Jekyll and Hyde-ish, like, 'Here's my daytime persona and this is my nighttime persona.' I wanted something more me," she says. "So Talia comes from 'Thalia,' who is the Greek muse of comedy. And Tucker is my name, and I also tuck, so it's a cute little pun."

The 26-year-old added "L'Whor" to her drag name last year, when she was adopted by fellow Denver drag queen Jessica L'Whor. "She's always been a very big supporter and guiding figure," she says of her mentor. "She's given me a lot of really essential tips in my life."

Tucker L'Whor describes her drag, in a word, as "delusional."

"That's usually how I introduce myself on stage," she says. "Talia is fun-loving, fashionable, delusional, quirky and a little bit of a clown. But I guess I'm trying to push my drag into a fashion-clown realm. Sometimes I succeed and sometimes I fall flat on my face, but it's all part of the journey."

Although Tucker L'Whor does perform in classic drag staples such as brunches and bingos, she prefers to come up with her own unique show concepts for her hosting gigs. With her murder-mystery nights, she aims to offer drag entertainment in an entirely new, interactive format. She originally dreamed up the idea during the pandemic, and staged her first murder mystery with her quarantine bubble.

Can you survive a murder-mystery night with Talia?
Nosferatune
"In the heat of lockdown, I was fortunate to live in, like, an adult dormitory. It's a very cute house, and there are seven apartments, so we did a lot of events together," she explains. "One of the events I wanted to push was a murder-mystery party, and I looked online and found a murder-mystery plot from Murders Incorporated. The person who writes them, her name is Chelsea Opfer — she's exceptional. So we downloaded the base one, which is a 1920s murder mystery, and I got in drag and ran it with the entire house, a total of eighteen people." All of the participants had a blast, and Tucker L'Whor knew the party idea had potential on a bigger scale.

Tucker L'Whor proceeded to present her murder-mystery concept to all different venues around the city. "In the case of the murder mysteries, I messaged upwards of thirty venues. Over a two-month period, I would sit down on my break from work and just email every single venue within a twenty-mile radius. Until one day, I took a day off from work to go to every venue I could possibly think of and just walk in and say, 'I want to speak to your manager, this is my idea, this is what I have.' In the face of being told no so many times, there had to be some level of delusional confidence," she says. "The responses ranged from 'No, thanks, I'll get back to you, maybe when the pandemic is over' to 'No, we don't do that here."'

Unlike most drag entertainers, Tucker L'Whor specifically sought out queer-friendly, allied spaces rather than LGBTQ+ bars and clubs. "I really only stuck to allied spaces. The thing is, there are so many talented drag artists in Denver and Colorado in general, to such a degree that so many queer venues, the specifically gay and lesbian venues, are very full," she explains. "I wanted to take a direction that was going to stand out from the usual locale that drag shows are at." 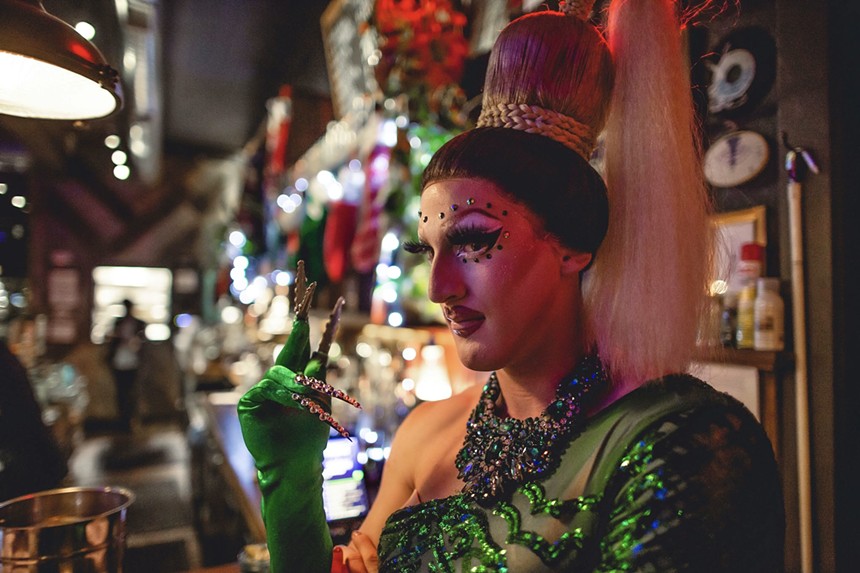 Tickets to the murder-mystery nights usually sell out about a week before the event.
Nosferatune
One venue finally responded favorably: the East Colfax cocktail bar Middleman. Tucker L'Whor staged her first murder-mystery night at Middleman last September, using the original 1920s prohibition plot, and has been offering them on a consistent basis ever since.

Preparation for the murder-mystery night starts a week or two in advance, when participants receive an email with their character's name, occupation, backstory and involvement in the murder plot. And everyone goes all out with their costumes. When I attended the first night in September, I played the fed-up, gossiping maid of the glamorous socialite (French maid uniform and all). While other characters perished, clues such as newspaper clippings and secret letters were passed around to help solve their murders. After Tucker L'Whor revealed the guilty parties at the end of the night, she gave out awards for Best Costume, Most In Character and Closest Guess.

Our "cast" that night coincidentally included two additional bonus drag queens, Whorechata as a money-hungry trophy wife, and Venus Victrola as a mob boss, so naturally they snagged Best Costume and Most In Character. And when Tucker L'Whor decided to write her own Clue-themed murder-mystery plot for the Christmas edition, she included roles for Whorechata and Victrola.

"I designed all the script, the action, the plot, all entirely from scratch," she says, "and I worked with Anne-Michelle, Venus, Whorechata and Matthew Cox to create this completely unique, very theatrical drag experience. It was so much fun."

The Christmas Clue-inspired mystery plot was a one-off experiment, but Tucker L'Whor hasn't ruled out writing another original plot in the future. In the meantime, she will cycle through the three plots she purchased from Murders Incorporated: the 1920s Prohibition theme, a Masquerade theme and a Midnight Manor theme. 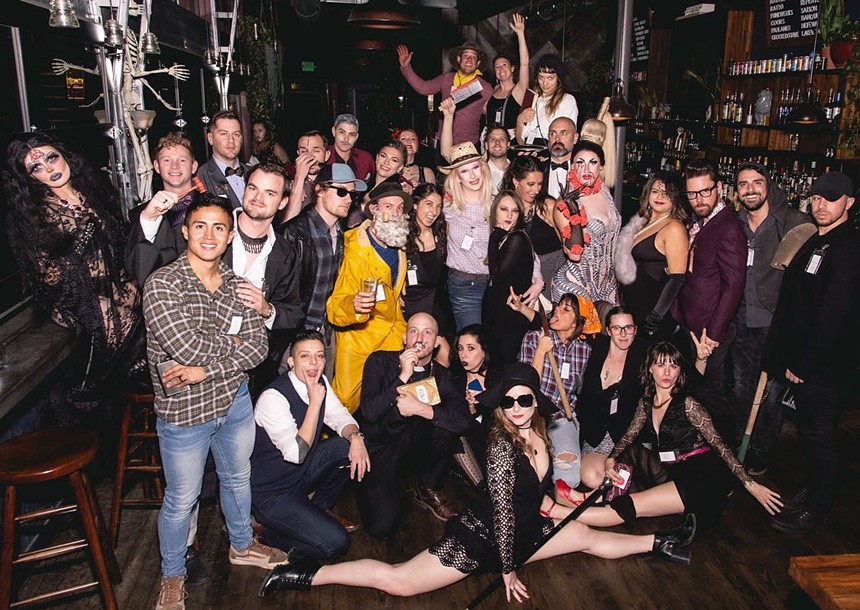 A sold-out show includes around thirty people.
Nosferatune
"We have Masquerade in New Orleans. It's based around a lot of voodoo magic, but I do want to preface that it's based on the stereotypes of voodoo magic, and not a true historical recounting of what it is," she clarifies. "Then there is Midnight Manor, which is my personal favorite, because it recounts a spooky mansion, and there's a mystery within the mystery. It's a mystery from thirty years ago that you also have to figure out in order to solve the mystery that's happening now."

Now that she's proven how popular the parties are, other venues where Tucker L'Whor has previously hosted shows are hopping on the murder-mystery train. "We're going to do them at Middleman, Call to Arms Brewing Company, Lady Justice Brewing, and Fiction Brewery," she says. "Those are our main four, and then I also have people who message me for private events, where they host it at their house."

Tucker L'Whor's favorite part of the murder-mystery parties so far has been completely overturning the usual dynamic between the audience and performers. "In the stereotypical drag show, the performance comes from the artist. The artist brings their artistry, they perform for people, people tip them and they cycle out. With this model, the performance comes from the audience," she explains. Tucker L'Whor's Christmas cast, from left, Matthew Cox, Anne-Michelle Misdemeanor, Tucker L'Whor, Venus Victrola, and Whorechata.
Nosferatune
With three murder-mystery parties coming up in the next few months, now is your chance to be a part of the uniquely riveting, thoughtfully curated experience. The next event is at Middleman on Sunday, May 15,  followed by one on June 11 at Lady Justice Brewing Company and a July date at Fiction Beer Company. Tickets range from $30 to $50 per person depending on the venue, and all tickets include a themed cocktail.

Can you solve the murder at hand, or will you be one of the unlucky three who meet their demise? There's only one way to find out.

Talia Tucker L'Whor's next murder-mystery event is at 7 p.m. Sunday, May 15, at Middleman, 3401 East Colfax Avenue. Tickets are $30 and available on Tucker L'Whor's website.
KEEP WESTWORD FREE... Since we started Westword, it has been defined as the free, independent voice of Denver, and we'd like to keep it that way. With local media under siege, it's more important than ever for us to rally support behind funding our local journalism. You can help by participating in our "I Support" program, allowing us to keep offering readers access to our incisive coverage of local news, food and culture with no paywalls.
Make a one-time donation today for as little as $1.