Review: A Delicate Balance Tips a Family Into Turmoil at Edge 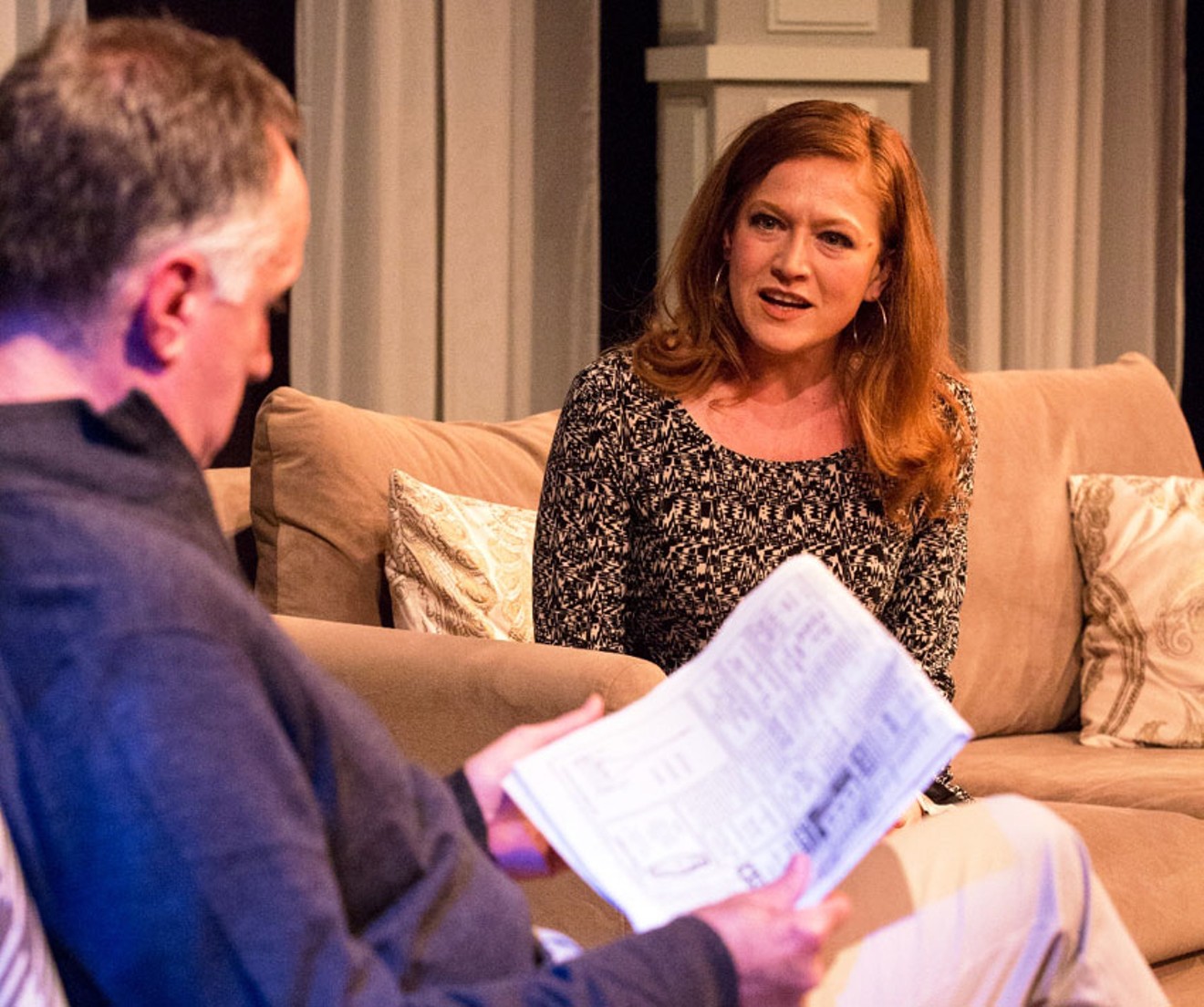 Kevin Hart and Maggy Stacy in A Delicate Balance. RDG Photography
We’ve all hosted an unexpected guest, someone who, as Coleridge said of old age, lingers after he “hath outstayed his welcome while/And tells the jest without the smile.” But in Edward Albee’s A Delicate Balance, now at Edge Theater Company, the intrusion of Edna and Harry into the home of longtime friends Tobias and Agnes entirely upends the apple cart, tipping the balance of their hosts’ marriage — a marriage held together with alcohol, pointed barbs and mutual loathing — into chaos.

Before the unanticipated guests appear, saying they’ve fled their own home because of some nameless and all-encompassing fear, we’ve watched Agnes and Tobias in an uneasy threesome with Agnes’s drunken, intensely witty and intensely nasty sister Claire. These people are upper-crust; their living room is elegant; they speak frequently of servants who make dinner and sometimes abscond with the coffee beans — though these servants never appear in the hermetically sealed world of the play. Edna and Harry are accommodated in the bedroom of Agnes’s daughter Julia, and after a while, Julia herself erupts onto the scene. She’s on the verge of her fourth divorce, somewhat unhinged, and furious about the intruders in her room. She wants them out. It’s her room. They’ve taken her place, and she’s the blood relative, the rightful family child. A discussion follows of her rights versus those of best friends Edna and Harry — friends toward whom Agnes and Tobias show no warmth or affection at all, only a chilly, calculated sense of duty. “I want what is mine,” insists rage-spitting Julia.

Anyone who’s seen Albee’s corrosive Who’s Afraid of Virginia Woolf? knows he sees marriage as hell, and we expect no tenderness here. When Julia, utterly defeated, rushes off in the throes of what could be seen as either a two-year-old tantrum or an utterly soul-destroying fit of despair, Tobias suggests that Agnes go and comfort her. Agnes explains she can’t because tending her daughter drains her of her very self: “I haven’t the time, Tobias. I haven’t the time for the four-hour talk, the soothing recapitulation. You don’t go through it, my love — the history. Nothing is calmed by a pat on the head, a gentle massage or slowly, slowly combing the hair….” Later, Agnes changes her mind, and there’s a moment of almost-closeness as she and Julia ascend the stairs together. But Agnes’s motherliness is a fleeting thing.

Written in 1966, A Delicate Balance is widely regarded as one of the great plays of the twentieth century. The dialogue is extraordinary: brilliant barbs shooting over a dark, underlying swell of unexpressed or partially expressed meaning, moments of raw humor, unexpected meditations. The ending, however, strikes me as unnecessarily drawn out, and its supposed revelations are less than revealing.

What does it all mean? Perhaps Edna and Harry, who are referred to by Tobias as bringers of terror and plague, represent death — the death of Agnes and Tobias’s precarious marriage, or maybe mortality itself: There are references to illness, a biopsy. Perhaps Albee is dramatizing the sterile emptiness of a specific way of life; he himself was an unhappy adoptee in a highly affluent and rigidly Republican family. In this play, as in Virginia Woolf, there are references to a lost boy — Julia’s dead brother; a child in Woolf who may never have existed.

Director Warren Sherrill has assembled a cast capable of making the stunning dialogue sing. Abby Apple Boes is an effectively thin-lipped Edna, who actually seems more bossy than afraid, and Steve Emily plays her stolid Harry. Kevin Hart has perfect timing as Tobias — bemused, passive-aggressive, finally disintegrating into rage and fear. And, front and center, are three magnificent women. There’s Martha Harmon Pardee — who once starred in Virginia Woolf for the now-defunct Paragon Theatre — as Agnes, with her pained, careful hostess’s smile freezing on her face; her unforgiving wit and moments of piercing grief. Emma Messenger, the lead in Edge’s Woolf two years ago, brings an intense, dark humor to Claire, who once slept with Tobias and perhaps also Harry. Maggy Stacy’s Julia may be bratty, but she’s also the most passionately human member of the group, a whirlwind, a volcanic eruption, fighting — hopelessly, helplessly — for something she can’t define but knows is all-important.