Grab Your Wands: Potted Potter Is Coming to Denver

Potted Potter s a seventy minute parody of the beloved series. StarVox Entertainment
Potted Potter is a two-man comedy show that bends the plots of the seven Harry Potter books into seventy minutes of parody, and it's coming to the Newman Center for the Performing Arts from Tuesday, January 4, through Sunday, January 9.

Known as “The Unauthorized Harry Experience,” Jefferson Turner and Daniel Clarkson initially created the act as a ten-minute sketch for the release of Harry Potter and the Half-Blood Prince, the penultimate book, in 2005. The show has been in near-constant rotation since, touring around the world.

"We were thinking naively that we would be performing for about 100 people,” Turner says. There were closer to 1,200, and the comedians performed multiple times to different sections of the line.

“We never experienced anything like it,” Turner adds, comparing it to 1960s Beatlemania. Turner had read all five of the existing Harry Potter books in the weeks before their performance. He says he “just adored them” and, “if anything, they’re page-turners.”

Turner describes Potted Potter as "your classic straight-man funny act." He often plays the straight man to Clarkson's oblivious buffoon. Eventually, however, the audience finds out that it’s just “two fools trying to retell the story,” Turner clarifies. “And we do manage it, though lots is planned to go wrong.”

The course of the show encompasses seven books, 360 characters, one fire-breathing dragon and one Quidditch match, the Potted Potter website boasts. There are also references to pop culture and literature, and simple slapstick that anyone can enjoy. 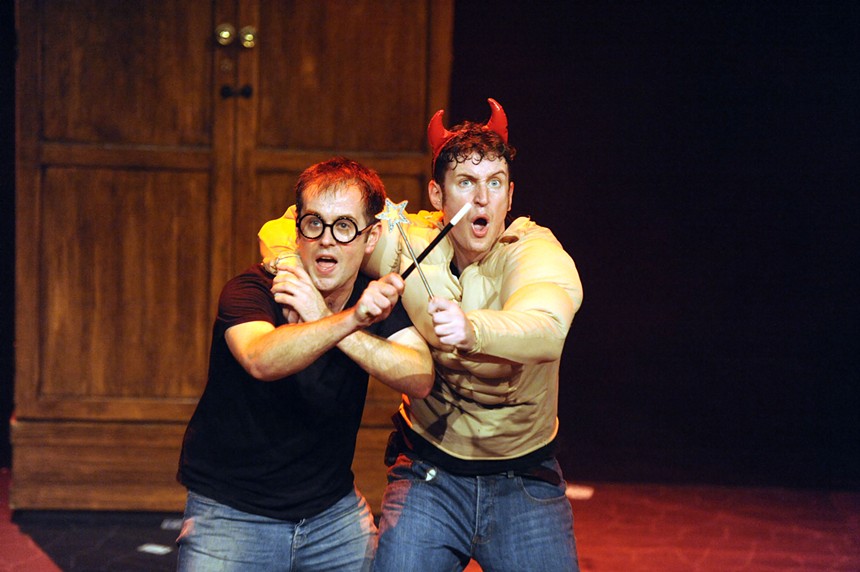 Co-creator Jefferson Turner (left) says that "proper Potter heads love the show."
StarVox Entertainment
Turner and Clarkson created the first hour-long Potted Potter in 2006. After a successful show at the Edinburgh Fringe Festival in 2008, they took the performance on the road. By 2012, they’d performed in Australia, New Zealand, South Africa and Canada. They waited to perform in the United States until 2013.

“We were terrified when we first brought it out to the States,” Turner says, citing a fear that the British jokes wouldn’t land. But they opened in New York City, and “the audience got the humor immediately.”

In fact, they only need change certain cultural references to suit different global audiences. Even so, Potted Potter is constantly evolving. Turner says he and Clarkson have performed it over 2,000 times, so it’s more fun for them to change up the sequence.

Their favorite moments are when they deliver jokes that make all ages in the audience laugh, in part because they hope their show will encourage children to love the theater. “When you’re a kid, there’s something magical about laughing as the same joke as your mom or dad,” Turner says.

Much of the success of the comedy show is credited to the long-lasting appeal of Harry Potter, Turner continues. They’ve done a few other spinoffs such as Potted Pirates, Potted Sherlock and Potted Panto, but none has had quite the same reaction.

“The books are enduring,” he says, noting that “proper Potter heads love the show."

But even audience members with no prior knowledge of the Potter canon should be able to come and join in the laughter.

Potted Potter, Tuesday, January 4, to Sunday, January 9, Newman Center for the Performing Arts, 2344 East Iliff Avenue. Tickets are $36.99.
KEEP WESTWORD FREE... Since we started Westword, it has been defined as the free, independent voice of Denver, and we'd like to keep it that way. With local media under siege, it's more important than ever for us to rally support behind funding our local journalism. You can help by participating in our "I Support" program, allowing us to keep offering readers access to our incisive coverage of local news, food and culture with no paywalls.
Make a one-time donation today for as little as $1.
Claire Duncombe is a Denver-based freelance writer who covers the environment, agriculture, food, music, the arts and other subjects.
Contact: Claire Duncombe