Review: Hedwig and the Angry Inch Measures Up at Aurora Fox 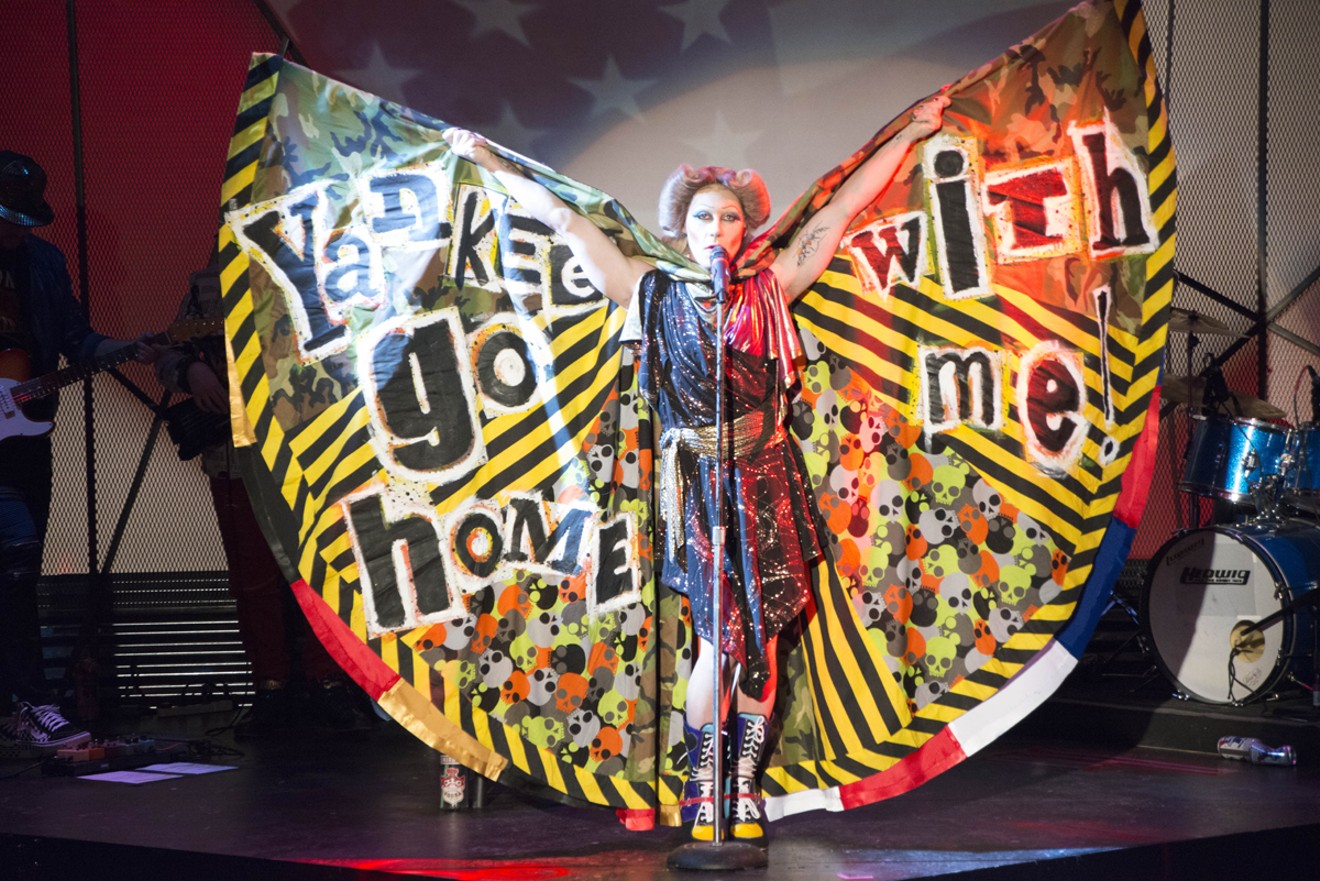 Jake Mendes in Hedwig and the Angry Inch. Christine Fisk
Hedwig and the Angry Inch, now playing at the Aurora Fox Arts Center, is about blurring boundaries, particularly the narrow binary view of sex generally held by most Americans. Hedwig herself is a “genderqueer character,” according to John Cameron Mitchell, who wrote the show with lyricist-musician Stephen Trask. “She’s more than a man or a woman,” he once said. “She’s a gender of one, and that is accidentally so beautiful.”

The ninety-minute show is itself a defiant mix of stage play and glam-rock concert. A semi-monologue spoken by Hedwig provides the narrative. She’s fronting her band, the Angry Inch, aided by her husband, Yitzhak, a Jewish drag queen from Zagreb whom she abuses and demeans — and who’s always played by a woman. The songs are terrific and add a fascinating, often fierce dimension of their own. In one of the earliest and best, “The Origin of Love,” Hedwig retells a story from Plato of a world peopled by beings with two faces and two sets of arms and legs; some are male and male, some both female, and some male and female. Split apart by a rage-filled Zeus, they become lonely, two-legged creatures, doomed to spend their lives searching for their lost partners.

The story Hedwig tells is of Hansel, “a slip of a girly boy” growing up in East Germany before the fall of the Berlin Wall, with an absent father and a withholding mother. Seduced by the idea of America — represented by the wafting scent of McDonald’s from the west and the luscious sweetness of U.S. candy — he took up in his twenties with Luther, an American soldier. They decided to marry. But to accompany Luther home, Hansel needed to become a woman. A botched sex change left him with neither penis nor vagina, but only a stub of flesh: an angry inch. Living in Kansas and deserted by Luther, Hansel began writing songs for and with the teenage brother of a child she babysat, and eventually became convinced that he was her other self, her lost partner. She gave him the name Tommy Gnosis. Now Gnosis — who rejected Hansel/Hedwig when he discovered she wasn’t a woman — is a huge star and playing at Denver’s Pepsi Center (this show has room for local jokes and references, and they’re well deployed); Hedwig sometimes opens a door and we hear the wild applause of Gnosis’s audience. The rest of the time, she pours out her soul, directs her musicians and abuses Yitzhak. She’s angry, tender, self-pitying, both graceless and glamorous, and much, much larger than life.

Jake Mendes in Hedwig and the Angry Inch.
Christine Fisk
Hedwig and the Angry Inch premiered off Broadway in 1998, having been developed through gigs in music clubs. It played for two years, has been seen all over the world, and received an award-winning Broadway revival with Neil Patrick Harris in the lead in 2014. This production proves it hasn’t dated in the slightest.
Eight years ago, in a production at the Avenue Theater, Hedwig was brilliantly played by Nick Sugar, who directs this version. He’s cast Jake Mendes in the role, and it’s an inspired choice. Mendes gives a gutsy, all-stops-out performance. He struts and strides, erects defenses and dismantles them. He maintains a love-hate relationship with the audience so that when he invades the first few rows, you’re never sure if he’s going to flirt or spit. Whichever it is, you can’t take your eyes off him. Well, except to run them over the first-rate and appropriately sullen four-man band or watch Norrell Moore’s sad, angry Yitzhak start to open up a touch, only to be shoved aside by her envious partner.

The Avenue space where Sugar performed was so small that the jammed-in audience became one seething, cheering mass. The auditorium at the Fox is more conventional. But Sugar’s excellent tech team successfully creates the communal feeling of a rock concert, and Kevin Copenhaver’s crazily inventive costumes are perfect.
It has been an odd year for the Fox, with offerings that varied widely in quality. Two interesting shows are scheduled for spring, and a new artistic director with an impressive résumé, Helen R. Murray, takes over in summer. Whatever the company’s future direction, let’s hope it carries forward the charge and energy of this exhilarating Hedwig.