History Colorado's scavenger hunt for Astrid Lee's mysterious book looks for secrets in Denver places that have disappeared. Courtesy of History Colorado
A year ago, when people were dying to get out of their houses, event organizer Chris Getzan and pop-culture genius Andrew Novick put together The Lost Book of Astrid Lee: A Physically-Distanced Mystery Quest through the History Colorado Center.  A scavenger hunt with weekly clues that one could solve alone, skulking alone around the noirish empty city like a modern-day Philip Marlowe (or maybe with a close friend or two from your COVID pod), Astrid Lee was designed to provide some relief from boredom and quarantine fatigue.

Contestants were tasked with uncovering pieces of Denver history related to the idea of democracy, tying in to History Colorado’s Smithsonian exhibit at the time — and could possibly win some prizes. Along the way, they discovered works of art, cool businesses in Denver and outside-the-box nonprofits at work.

It ended up being fairly successful, says Getzan, but with some mixed reviews: “The great thing about last year is how some people were over the moon about it because they did it with friends, and it was a bonding experience,” he notes. “But there were also people who said, “You ruined our weekend.” Getzan and Novick noted that the social aspect is what made the hunt enjoyable for many players.

The upshot? A new Astrid Lee chapter — Denver Calling: The Lost Book of Astrid Lee (Vol 2) — begins September 3, with a new, tighter format that requires a group working together up front, a shorter time scheme, and finding a new clue as soon as the previous one is solved. Local musicians and artists play a part, too, as things unfold. And Getzan and Novick welcomed a new partner in crime, Swallow Hill Music Association marketing associate Barry Osborne, to the planning team.


The story this time begins in the present but time-travels freely, taking scavengers back in time to learn more about the once-strong role of labor unions in Denver and how things have changed drastically in the present. This, of course, sheds light on history told in the museum’s current show, Building Denver.

“We came up with some interesting leads during our research,” Getzan claims as he begins to weave the new tale. “Three students of Astrid's met at the DU Chess Club after classes in the early ’80s and formed their own band, called Atom Tan.

“We started tracking down songs that Atom Tan wrote, and realized that listening to these three songs might lead people to Astrid's book,” he adds. It turns out that Lee’s mysterious book bears a remarkable resemblance to All That's Solid Melts Into Air: The Experience of Modernity, a real book by Marxist author Marshall Berman, who dissects the negative effect of modernization on civilization.

If the clues don’t come to participants automatically this year, how will they find them? 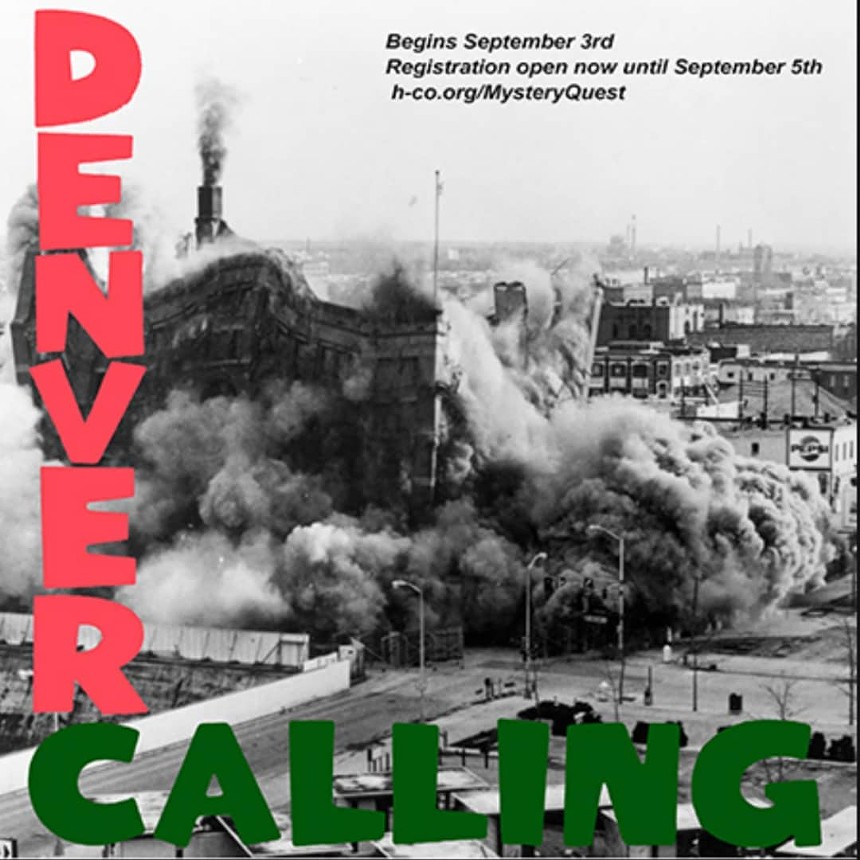 The hunt is on. Get your group together now!
Courtesy of Andrew Novick
“In order to find the book, people need to listen to the three songs,” Getzan continues. Where did those come from? With Osborne’s help, the team gathered a stable of notable Denver musicians, including Distance Walk, Felix Fast4ward, Michelle Rocqet (Milk Blossoms) and Kalyn Heffernan (Wheelchair Sports Camp) to step in and record remixes of Atom Tan’s encrypted songs on cassette tapes. “By the end of the last song, Barry was talking about making his own cassette tapes of songs,” Getzan says. “Andrew and I get off on seeing this new side to Barry: If Barry finds it as much fun as he did, we hope other people new to this will have an equal amount of fun.

“The songs reveal clues that'll get people to where the book is,” Getzan explains. “When a group signs up to play, they receive a case book on the band.” Then teams might just start looking more closely at phone poles and bulletin boards for long-lost Atom Tan gig posters — “and away they’ll go,” he adds.

Even the posters themselves reveal a side of Denver you didn’t know about: They were created by youth artists mentored by Arts Street. “We had the teens make fliers for punk and indie bands and make up the backstories,” Getzan continues. “They'll be posted along the way as clues.”

But it’s not only about the music and art. As Getzan notes, “There’s also history layered into it. A lot of this is about the ways the buildings in a city tell stories of modern life, living in a time of change. The focus is on places like music halls, theaters and union halls — places where people once formed personal relationships, smoked a clove cigarette or fell in love.

“In the case of union halls, those were places where people learned how to build power together,” he opines. “What happened to those? Because cities change, they go away, along with a lot about what is good about cities. Some are now parking lots.”

Going back in time, says Getzan, the hunt “tells a story about the sort of work or labor that once happened in Denver and where that lives now, and where people who did the work live now. Why do we not need those places anymore?

“If you work, nine times out of ten, you work for a boss. You don’t get to say where the profits go. Whatever decisions are made are not collective. But because work has changed, it doesn't mean power dynamics haven’t gone away. There are also new kinds of ways people can access it.

“Cab drivers had a place to go after work," he says. "Uber drivers don’t. It’s harder to organize if you’re all alone — now we have independent contractors.”

Getzan is done talking and gets to the point: “Part of this quest is how people have to get organized and make public decisions as a group in order to follow clues.” That could lead somewhere else in a quick minute, but he admits, “I don’t want to give away too many hints.”

Denver Calling: The Lost Book of Astrid Lee (vol 2) begins on Friday, September 3, and runs through September 19 in the streets of Denver. Groups of any size must register to play no later than Sunday, September 5; the fee is one payment of $10 to $30 per group. Learn more and sign up at the History Colorado website.
KEEP WESTWORD FREE... Since we started Westword, it has been defined as the free, independent voice of Denver, and we'd like to keep it that way. With local media under siege, it's more important than ever for us to rally support behind funding our local journalism. You can help by participating in our "I Support" program, allowing us to keep offering readers access to our incisive coverage of local news, food and culture with no paywalls.
Make a one-time donation today for as little as $1.