A Denver Animator's Horror Short Just Got Picked for Sundance

Denver animator Joe Cappa's "Ghost Dogs" will play as part of the 2021 Sundance short films program. Joe Cappa
Back in 2012, Joe Cappa left a career with an ad agency in Oklahoma and moved to Denver to focus on freelance video work and painting. He soon set out to learn animation so that he could bring his paintings to life.

"I’m a bit of an introvert, and my ideas were very specific, and impossible to make with a camera and friends," he explains. "Animation allowed me to create the bigger ideas I had in my head, and I didn't have to rely on a team of people to make it happen."

Cappa's "Ghost Dogs" — an eleven-minute, surreal horror film about a dog in an empty house who is haunted by creepy dog-human creatures — is the debut project from his animation studio, Great Question. The short has already garnered him a big honor: Out of the 9,933 short films submitted to Sundance, "Ghost Dogs" was picked to be one of fifty shown at the prestigious festival — which, thanks to the pandemic, will be screening at select theaters around the country and on Sundance's online platform from January 28 through February 3.

Westword caught up with Cappa to find out more about the film and his career as an animator: 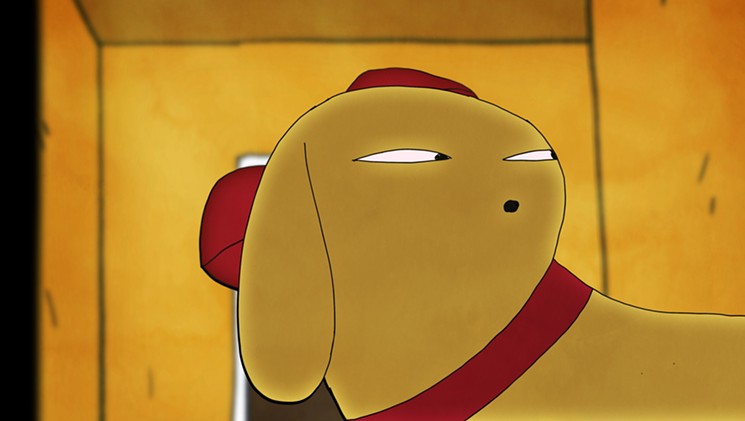 Joe Cappa hopes "Ghost Dogs" leads to possible full-length film funding.
Joe Cappa
Westword: What have you worked on before this?

Joe Cappa: I used to work for an ad agency in Oklahoma. There was a period of time I was animating At the Beach commercials, and I’m truly sorry for that. I didn’t write them! I moved to Denver to escape the ad world. I’ve animated a bunch of music videos for different artists, including Grandson, JFJO, Busty and the Bass, and No Love for the Middle Child.

I also step in as a cinematographer from time to time. I’ve shot a couple of features for Mickey Reece, who has established himself as a force in the indie film scene. I still do VFX for his movies, and I have a pretty big acting role in his next movie, which sounds hilarious. I am also a label designer for the brewery American Solera. I’m a better animator than a designer, though; I’m currently working on a cartoon pilot for a couple of people that I think will be pretty funny when it’s all finished.

What inspired this particular piece about the secret and haunting life of dogs? It's terrifying and hilarious all at once.

Thanks! I definitely wanted to mix those two emotions together as tightly as possible. I have been illustrating these dog characters with human legs and arms for a decade now. I think I like drawing them because they’re both creepy and funny.

I bought a Wacom tablet a few years ago, which allows me to draw straight onto the computer, and I did a test animation of those dog-people walking around, and I wanted to animate them more. I just needed an idea.

Ever since I can remember, I’ve had recurring dreams where I’m lost in a haunted house, so I decided to combine these two general ideas into a movie. I’ve seen so many horror movies where a family’s dog is barking at something unseen to its owner. It’s just a horror-movie trope, and I was just like, “That should be the whole movie.” I think the premise about a puppy being tormented by a family’s deceased pets is just a really, really good idea. I knew if I didn’t create this movie in my head, then someone else would, and they probably wouldn’t do the idea justice. So I set off creating the movie I’d like to see. I think humor and terror is such an integral part of the story.

"Ghost Dogs" is one part funny, one part horror.
Joe Cappa
Where are the people in your short? Absent? Dead? Out to work?

How is it making animation in Colorado? What does the state have that you need? Do you plan on sticking around?

"Ghost Dogs" ended up taking two years to complete. I started animating "Ghost Dogs" in my basement, but quickly learned it was going to be a time-intensive project, so I rented a desk at a shared office space called Goosetail Spaces, located right behind the Alamo Drafthouse. It was really nice. My desk had a nice view of the Rockies, and I was able to go downstairs and watch a movie whenever I was feeling exhausted.

Animation is made for people who can handle being holed up for long periods of time. Colorado is a beautiful state to escape and recharge every once in a while. I’ve been roped into a group that does the 48 Hour Film contest every year, and they’ve been a great resource for collaboration. I know a lot of filmmaker friends are upset with how little production incentives there are in the state for projects outside of commercial work. I know there are a lot of people trying to change that; I’m just kind of outside of all that business. Again, I’m usually just sitting in front of my computer all day.

Talk about what it's like releasing a film like this online and what your ultimate goals are with it.

I animated "Ghost Dogs" for the film-festival experience. It was a vehicle to go to festivals and meet people, but the pandemic pretty much ruined that. Hopefully, some film festivals in 2021 will be in person. But yeah, "Ghost Dogs" will be able to be viewed online for the duration of the Sundance Film Festival, which is a pretty cool way to get "Ghost Dogs" out to a larger audience, so I have no complaints. Sundance is really going above and beyond for their artists.

Some film festivals and distributors have reached out for screeners of "Ghost Dogs," which is exciting. Sundance has sent "Ghost Dogs" out to all the major streaming services, as well. The goal with "Ghost Dogs" is to grow the brand, whatever that looks like. A dream scenario would be to get funding for a feature film. I think the "Ghost Dogs" universe allows for expansion, but it will probably need to be more child-friendly. The short has some adult content.

I’m so honored to get into Sundance. Close to 10,000 shorts were submitted this year, and only fifty were selected. I didn’t know anything about frame-by-frame animation when I started the project. The film was a way to grow my skills as an animator, and now I feel fairly confident in my abilities. On to the next project!

"Ghost Dogs" will screen as part of the Sundance Film Festival online and in select theaters around the country, from January 28 through February 3; for more information, go to the Sundance website. Learn more about "Ghost Dogs" here.
KEEP WESTWORD FREE... Since we started Westword, it has been defined as the free, independent voice of Denver, and we'd like to keep it that way. With local media under siege, it's more important than ever for us to rally support behind funding our local journalism. You can help by participating in our "I Support" program, allowing us to keep offering readers access to our incisive coverage of local news, food and culture with no paywalls.
Make a one-time donation today for as little as $1.