“Untitled (Leonar 5746),” by Daisy Patton at K Contemporary. Wes Magyar, Courtesy of K Contemporary
Doug Kacena’s upstart K Contemporary, which occupies a Victorian storefront in LoDo, has cut a swath through the art scene by presenting museum-level shows with some of the region’s most interesting artists. The current exhibit, Daisy Patton: A Rewilded Arcadia, is extremely ambitious, and many of the works are so enormous, it looks like it could be in a museum. In fact, Daisy Patton is also the star of This Is Not Goodbye, now at the University of Colorado Art Museum, a show she sees as a companion to the one at K Contemporary.

Patton’s signature is the altered photograph. She begins by collecting vintage snapshots in junk shops and on the Internet and, after scanning them, uses digital programs to cover parts of the photos with colors, patterns and forms. The results serve as preliminary studies for her mixed-media paintings, including many small portraits and an assortment of mural-sized works. Patton makes enlargements of the photos on an oversized printer, adheres them to boards, then goes in with oil paints. The studies are necessary, she told me, since putting the paint in the wrong place would ruin the underlying print.

The painted intrusions take the form of delicate patterns, washes and heavily painted suggestions of flowers on winding stems. The flowers illuminate the meaning of the K Contemporary title, Rewilded Arcadia: Nature is overtaking civilization. As an example, Patton cites Chernobyl, where the landscape is turning back into a forest after the residents left. In her paintings, this transformation is conveyed by the painted flowers that grow over, and sometimes out of, the people in the snapshots. Patton’s work is sort of neo-dada, or maybe neo-pop, since she takes a photo and changes its presumably objective character through interventions with paint. When I see her pieces, I am always reminded of the painted, photocopied portraits by the late John Haeseler, a now all-but-forgotten Colorado artist who lived and worked here from the ’70s to the ’90s.

The two Patton shows represent a kind of farewell to the Colorado art scene, as Patton has just relocated to Seattle. 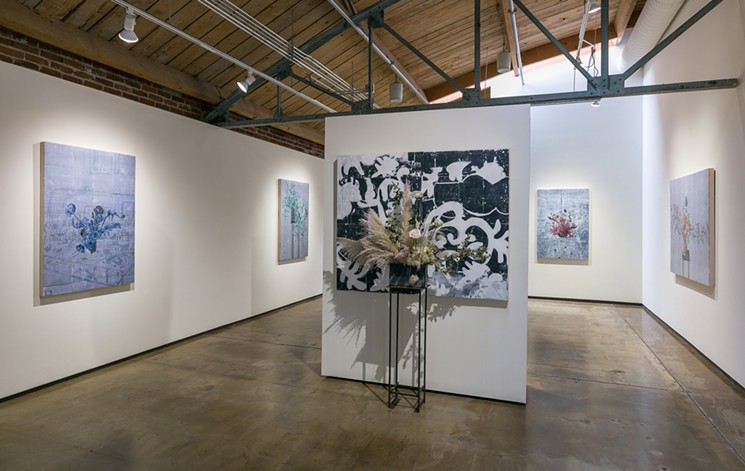 On view in the dramatic front space is Jill Hadley Hooper: Still Life, with a selection from this well-known Denver artist’s recent “Still Life” series. Jill Hadley Hooper’s style is to convincingly render her representational subjects, but in a way that introduces a dream-like, if not surrealistic, mood. In this series, which she sees as representing a change in her sensibility (though to me it’s a pretty subtle shift), Hooper carefully depicts flower arrangements in vases set on small tables. This particular subject matter — still-life scenes anchored by flower arrangements — is most closely associated with women artists working in the late nineteenth and early twentieth centuries, the first era in which large numbers of women in Europe and America began to work as painters. 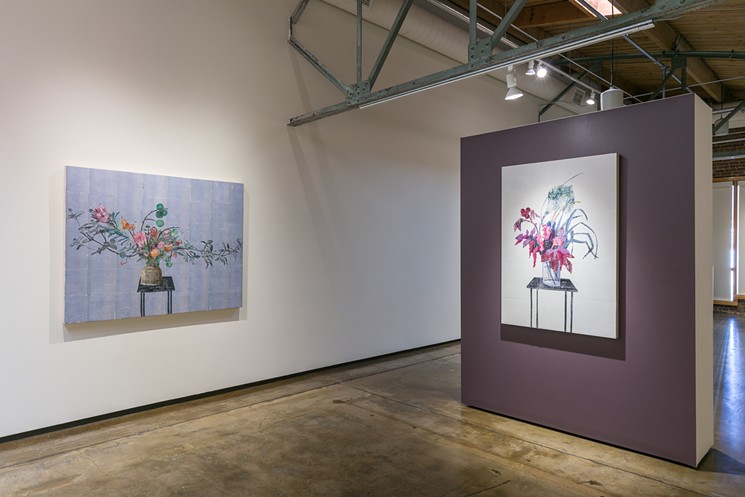 Jill Hadley Hooper: Still Life at Goodwin Fine Art.
Wes Magyar, courtesy of Goodwin Fine Art
As traditional as this interest in painting flowers may seem, Hooper makes these still-life scenes contemporary in a couple of ways. First, there are the tiling patterns that cover most of the backgrounds, with the joints of the repeated squares expressed with bits of white; the bouquets have been delicately painted on top of these all-over layers. Hooper added conceptual content by introducing a process component, asking friends to bring arrangements of flowers from their own gardens. For Hooper, the flowers became conflated in her mind, and in her paintings, with the friends who arranged them, so she sees the resulting still-lifes as portraits of sorts. By asking others to come up with what she would depict, Hooper lost some control of the specific subjects, since she simply recorded what her friends brought instead of drawing something she specifically chose. In her artist statement, Hooper says this aspect of the process was liberating.

The paintings are conventionally beautiful, a description that’s not meant to diminish them in any way; the pastels of the flowers and leaves look perfect set against the typically neutral tones of the grounds. In the center of the space, surrounded by all these quietly poetic paintings, is a simple installation that recalls Hooper’s process, with a dried-flower arrangement on a floor stand that partly blocks a painting and, in that way, becomes part of it. The painting, “Still Life No.1,” is quite different from the florals: It’s mostly black, with what seems to be an expressive wallpaper pattern across it.

Mark Villarreal's solo at Goodwin Fine Art.
Wes Magyar, Courtesy of Goodwin Fine Art
A second solo in Goodwin’s more cozy back gallery, the small but elegant Mark Villarreal: Taíno, does not concern nature, at least not overtly — these paintings are non-objective works. Despite this distinction, the Villarreal outing is an appropriate companion to the Hooper solo rather than a non sequitur. That’s because these mostly small pieces have lyrical compositions and cheery and colorful palettes, not unlike those of Hooper’s flowers.

Villarreal, who lives in Boulder, has exhibited his abstractions for decades, most recently at Goodwin. Some of the paintings here are from the “Taíno” series, but others are from different series, including “Villa Clara” and the “Aremisa.” Regardless of which series they belong to, many have light-colored grounds over which Villarreal has inserted rounded shapes on top of bars or fields of color. A couple of the larger paintings have more full-bodied color schemes. In “A Night Like This,” for instance, a rich and multi-toned pinkish field takes up two-thirds of the exaggeratedly long horizontal panel, making the painting almost glow under the track lights. Another painting with a toned-up palette is “Chandra II,” but in this case, the light is absorbed by the big blue field on the left.

As the days get shorter and everything starts turning brown, a good way to get rid of any initial symptoms of seasonal affective disorder is to focus on all the eye-dazzling colors used by Patton, Hooper and Villarreal.

Jill Hadley Hooper: Still Life and Mark Villarreal: Taíno, through October 27, Goodwin Fine Art, 1255 Delaware Street, 303-573-1255, goodwinfineart.com.
KEEP WESTWORD FREE... Since we started Westword, it has been defined as the free, independent voice of Denver, and we'd like to keep it that way. With local media under siege, it's more important than ever for us to rally support behind funding our local journalism. You can help by participating in our "I Support" program, allowing us to keep offering readers access to our incisive coverage of local news, food and culture with no paywalls.
Make a one-time donation today for as little as $1.