May the Fourth Be With You: Four Ways to Celebrate Star Wars Day in Denver

Fans of Carrie Fisher gathered at Wings Over the Rockies Air and Space Museum to pay tribute to actress. Westword
Carrie Fisher's death makes this a particularly notable May the Fourth, and Star Wars fans will be celebrating the Force and the Dark Side alike all over Denver. From the airport to your couch, here are four notable events: 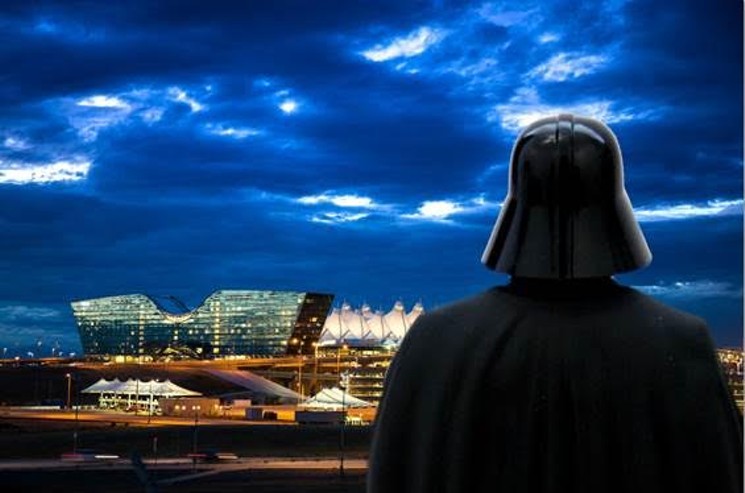 Art War!
Ken Hamblin
Art War: A Star Wars Party
6:30 p.m. May 4
The Curtis
For the second year in a row, the Curtis Hotel will host Art War, a gala showcasing more than 75 Star Wars-themed artworks by Colorado artists. Show up in costume, enjoy the exhibit, and dine and dance into the night. While you're there, toss one back in memory of Carrie Fisher. Tickets start at $30 and can be purchased here.

Star Wars
Star Wars Marathon
May 4-7
Your Couch
Oddly, neither the Sie FilmCenter nor the Alamo Drafthouse have special May the Fourth programming, so if you want to celebrate this hallowed franchise by watching the actual films, you're going to have to do so in the comfort of your own home. Break out the popcorn and head to a couch near you.

Itchy-O performs at a benefit for the Ghost Ship fire victims.
Scott Lentz
May the Sith Be With You: Itchy-O
9 p.m. May 6
Oriental Theater
Forget the Force: Try the Sith. Fresh from their performance at Santa Fe's Meow Wolf, the mysterious marauders of Itchy-O will bring their dark magic to the Oriental Theater, where they will enchant the crowd with flashing lights, pounding drums and all the noise you can handle. Tickets are available here.