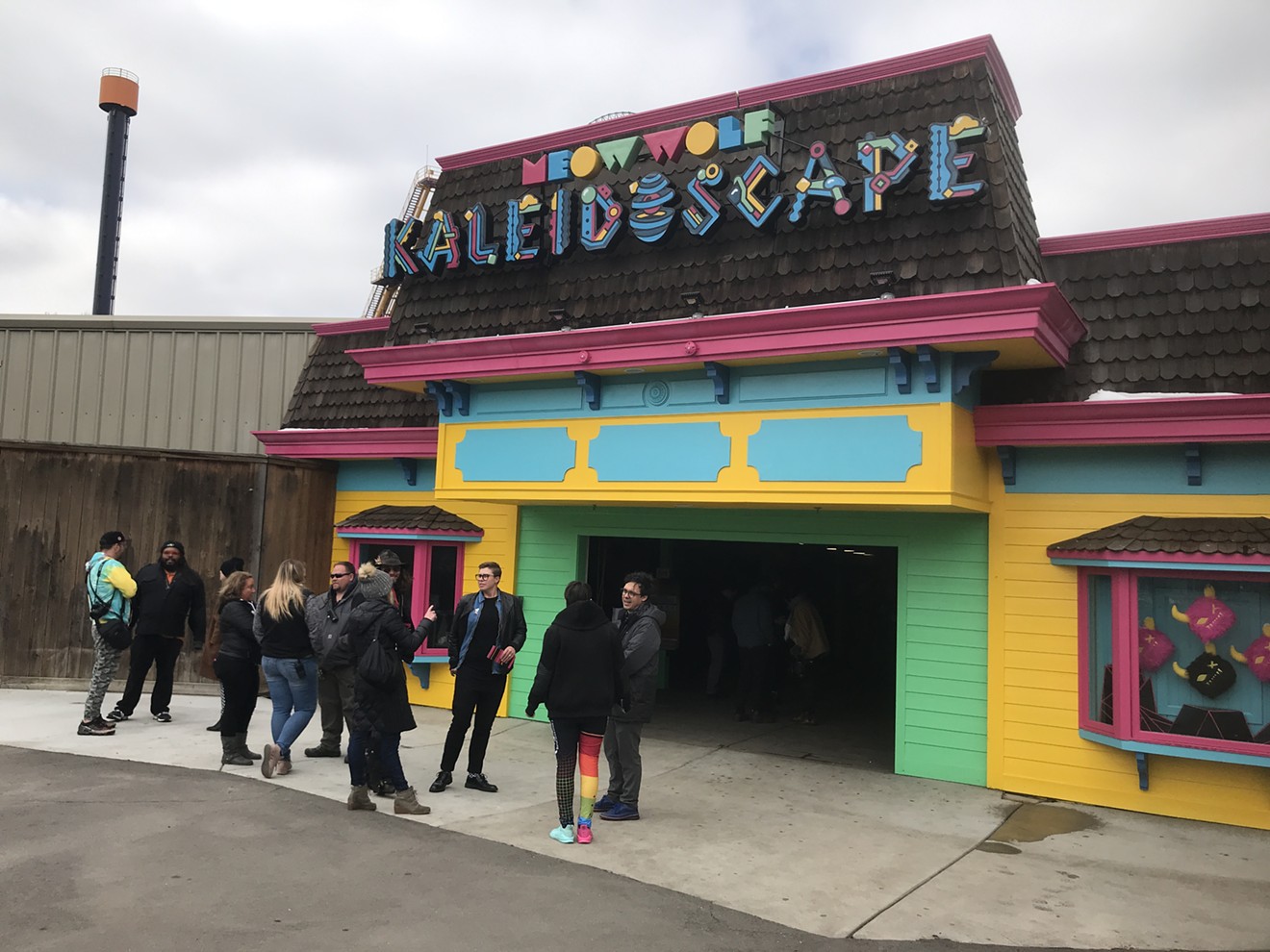 Artists who worked on Kaleidoscape hobnob in front of the ride. Kyle Harris
Meow Wolf's artist-driven dark ride, Kaleidoscape, opens to the general public at Elitch Gardens this weekend. Season pass-holders had the chance to experience it last weekend, and while they suffered through brutal lines in the process (as people are likely to all summer long, since even regular rides can have waits of 45 minutes to an hour), Kaleidoscape is worth the hassle.

Here are twelve things to know before you hop on board: 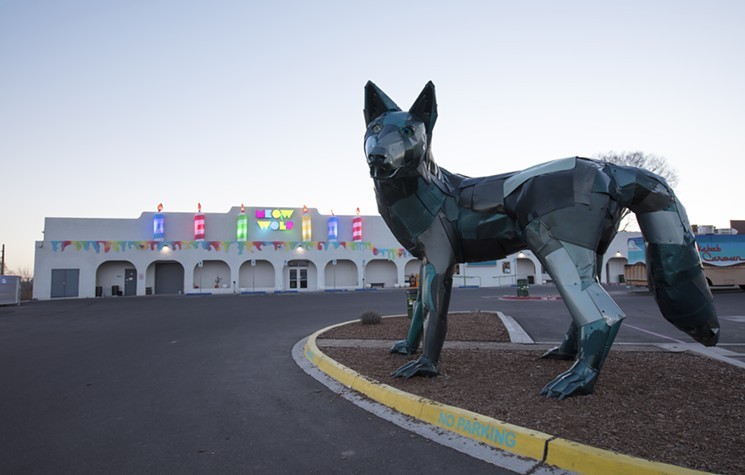 Meow Wolf stands proud.
Kate Russell/Meow Wolf
What's Meow Wolf?
Meow Wolf's story goes like this: It started as a scrappy DIY arts collective of dumpster divers just over a decade ago and turned into a multimillion-dollar company after Game of Thrones author George R.R. Martin gave the group an infusion of millions of dollars to turn an old Santa Fe bowling alley into a massive, sci-fi-themed immersive art installation called The House of Eternal Return. The installation opened in March 2016 and became a bucket-list destination for travelers, also helping to build up Santa Fe's midtown neighborhood. Meow Wolf has experienced massive growth and is now working on projects in Denver, Las Vegas, Phoenix and Washington, D.C. 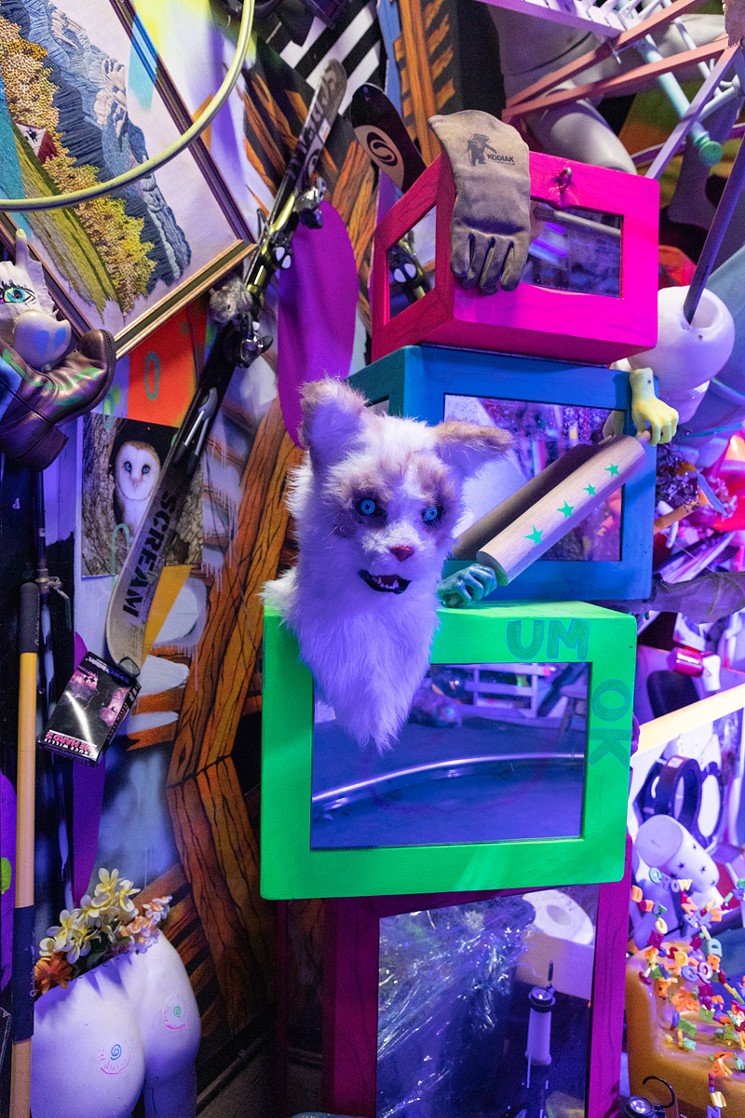 Kate Russell, courtesy of Meow Wolf
Why are artists working at an amusement park?
Meow Wolf's founders are allergic to art-world snobbery and believe art should be more of a populist experience. Matt King, for example, had lifelong dreams of building amusement park rides, and describes the Meow Wolf dark ride at Elitch Gardens as a dream come true. The Santa Fe business recruited a number of Denver artists to work on site-specific installations that make up Kaleidoscape. 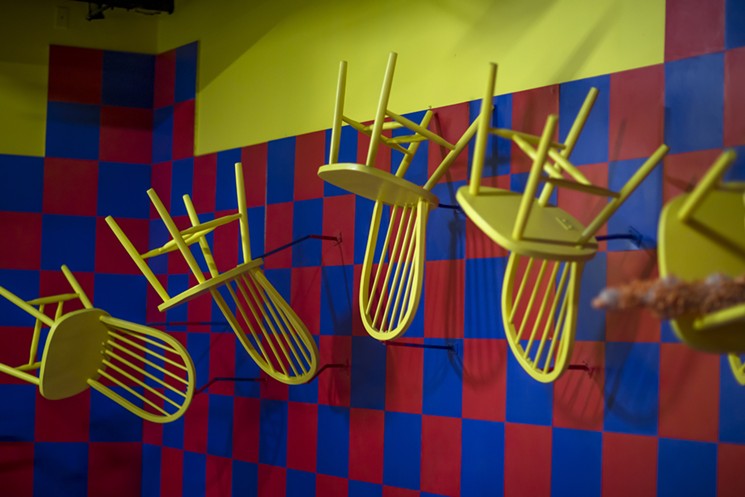 Kaleidoscape turns the traditional dark ride upside down.
Photo by Kate Russell, courtesy of Meow Wolf. Art by Kenzie Sitterud.
Which Denver artists are involved?
The Denver artists who worked on Kaleidoscape include Frankie Toan, Laleh Mehran, Kenzie Sitterud, Michael Ortiz, Chris Coleman, Brick Suede and Katie Caron. Toan is a DIY artist who works with found materials to create installations, interactive works and plush sculptures. Mehran, the daughter of Iranian scientists, works at the intersection of video, performance and geometry, and teaches emergent digital practices at the University of Denver. Sitterud, an artist-in-residence at RedLine, explores the relationship between queer identities and domesticity in massive installations and design projects. Ortiz is known for murals and street art projects; he heads up the RiNo-based art collective Like Minded Productions. Digital artist Chris Coleman also teaches in the emergent-practices department at the University of Denver and makes multimedia works. Katie Caron, who is represented by Havu Gallery, heads up the ceramics and sculpture program at Arapahoe Community College and explores escapism through art. Brick Suede appears to work in relative anonymity: If you're out there, tell us more about yourself.

A look at Kaleidoscape.
Kate Russell, courtesy of Meow Wolf
So a bunch of artists built a dark ride? Is that even safe?
They didn't build the ride from scratch. Kaleidoscape is a remodel of Ghost Blasters 2, which has been at the amusement park since 2008. Kaleidoscape runs on the same tracks, uses the same carts and even the same guns from the original ride. Other sculptural elements of Ghost Blasters 2 were incorporated into Meow Wolf's ride, while most of the installation is original to this piece.

Isn't Elitch Gardens being torn down to make way for a new development? If so, what's happening with Kaleidoscape?
All things come to an end — even the new ones. And while in a few years the River Mile development will require that Elitch Gardens moves from its current location (both are owned by the same company), there's no guarantee that Meow Wolf's ride will survive the transition, so come see it now. While Elitch Gardens' future home is uncertain, Meow Wolf's isn't: With the help of Elitch's owner, the collective is building a 90,000-square-foot facility in Denver at the intersection of I-25 and Colfax Avenue.