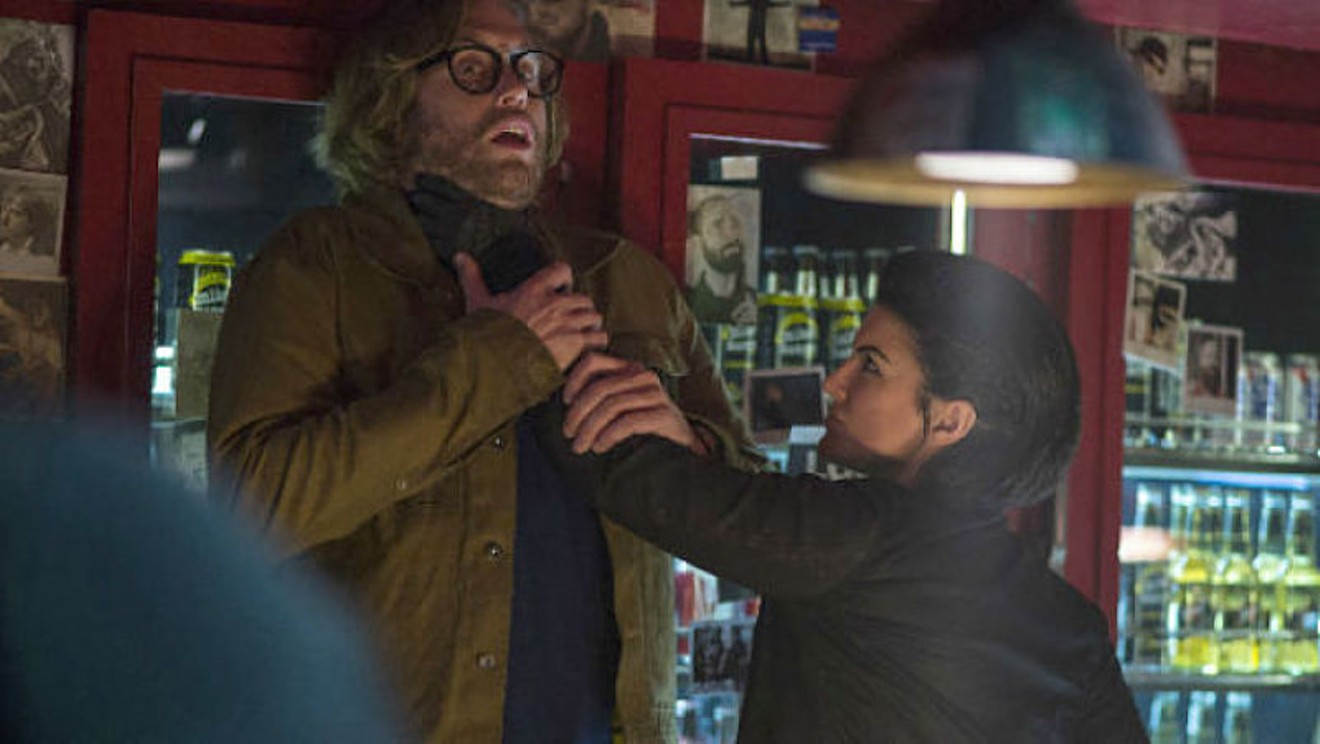 T.J. Miller, up against the wall in Deadpool. 20th Century Fox
A year and a half ago, I would have regarded a surprise drop-in from T.J. Miller with pride — a gracious benediction for a humble Colfax open mic from a man who'd reached the pinnacle of success most only hope for in the unforgiving field of comedy. I had admired Miller, who was born in Denver and graduated from East High School, for his convention-shattering standup, hilarious presence in Silicon Valley and Deadpool, and steadfast boosterism for the local comedy scene. I'd even interviewed him for this very publication.

Then a Daily Beast exposé detailed troubling allegations that had previously only been rumored: Miller reportedly sexually and physically abused his college girlfriend, and the story of her mistreatment had been corroborated by five witnesses and the George Washington University's student court. Miller denied the charges, but still lost a couple of high-profile gigs (such as the voice of a sentient glob of mucus in the ad campaign for Mucinex expectorant). On September 17, I showed up at the Lion's Lair expecting to co-host another unremarkable evening of comedic experimentation and instead was confronted with a moral conundrum when I spied Miller lurking near the entrance.

I consider my current co-stewardship of Denver's longest-running open mic to be a badge of honor from the comedy community, and I follow the Lair's foundational ethos that everyone who shows up and signs up deserves their three-to-five minutes of stage time. When a comedian with a list of credits as impressive as Miller's appears, the typical protocol is to show an almost unseemly degree of deference to our more successful peer. In light of the disturbing charges against him, however, I didn't feel I could follow that protocol and still face myself in the mirror. So I brushed past a performer I previously would have greeted eagerly, making a beeline for the greenroom where I ruminated until my co-host, Roger Norquist, arrived.

We quickly agreed that while we were too cowardly to confront Miller directly, we both were unwilling to grant him the platform of even the ignominious stage we call home. While comedy clubs may be willing to spotlight such villains of the Me Too Movement as Miller and Louis C.K. — another former hero of mine I've summarily canceled from worship because of his atrocious behavior — Norquist and I promptly agreed that allowing an alleged perpetrator of sexual and physical violence on the stage of our beloved dive-bar sanctuary ran contrary to the spirit of the scuzzy, yet safe, performance space we endeavor to cultivate week after week.

"You guys can do whatever you think is right," Lion's Lair proprietor and bartender Tony Meggitt responded to our fevered queries — to his eternal credit, by the way. (Seriously, folks, give it up for Tony and tip generously at the end of the night.) After an unusually long and fraught backstage conference, Norquist and I settled on engaging in an increasingly less oblique campaign of public shaming, hoping to ratchet up the discomfort to a level so unbearable that Miller would be compelled to vacate the premises.

"You do jokes and all the host-y things," Norquist decided backstage. "I'm just going to keep saying, 'Reflect on your sins!' It's going to get very uncomfortable." As relieved as I was to play a straight-man role, every joke I attempted fell flat, and I was inspired by Norquist's insistence on addressing the Uber driver-slapping, bomb-threatening and otherwise disgraced elephant in the room.  I'm happy to report that Norquist and I both landed a few scorching burns from behind the safety of the microphone — highlights include "The proper way to apologize is saying, 'I'm sorry!'" and "Give it up for a comic you won't be reading about in Jezebel," but truth be told, my co-host and I both regret not taking a more direct approach.

Miller did eventually depart, but neither of us can shake the feeling that we could have done more. Hosting an open mic may be a gig that requires few real responsibilities, but ensuring the sense of safety and well-being of every comic on the sign-up list is chief among them. We tried our best in a lose-lose situation, but ultimately fell short of our ideals.

Part of the reason it's so difficult to forgive comedians like Miller and Bill Cosby — and, to a lesser extent, C.K. and Aziz Ansari — is that every standup enters into an unspoken contract with their audience, one that tacitly establishes that their material is grounded in truth, no matter how shocking it may be. Not only should the Me Too-tainted comics make a sincere effort to atone for their wrongdoings offstage, they shouldn't attempt to return to the spotlight until they're ready to fearlessly address their misconduct. (Or better yet, they should never come back at all.) These cases are a betrayal of that unspoken contract between comedian and performer and, much more important, an enduring source of trauma to the victims in question. Miller apparently lacks any sort of remorse for his actions, and all of his public appearances since the allegations became public have the toxic whiff of gaslighting.

Even the smallest stage doesn't have to be a haven for men who abuse their power. If handing a mic to someone like T.J. Miller has the potential to hurt even one more person, maybe no one should ever do it again.

Sign up for the Lion's Lair open mic starts at 10 p.m. every Monday. Abusers need not apply.
KEEP WESTWORD FREE... Since we started Westword, it has been defined as the free, independent voice of Denver, and we'd like to keep it that way. With local media under siege, it's more important than ever for us to rally support behind funding our local journalism. You can help by participating in our "I Support" program, allowing us to keep offering readers access to our incisive coverage of local news, food and culture with no paywalls.
Make a one-time donation today for as little as $1.