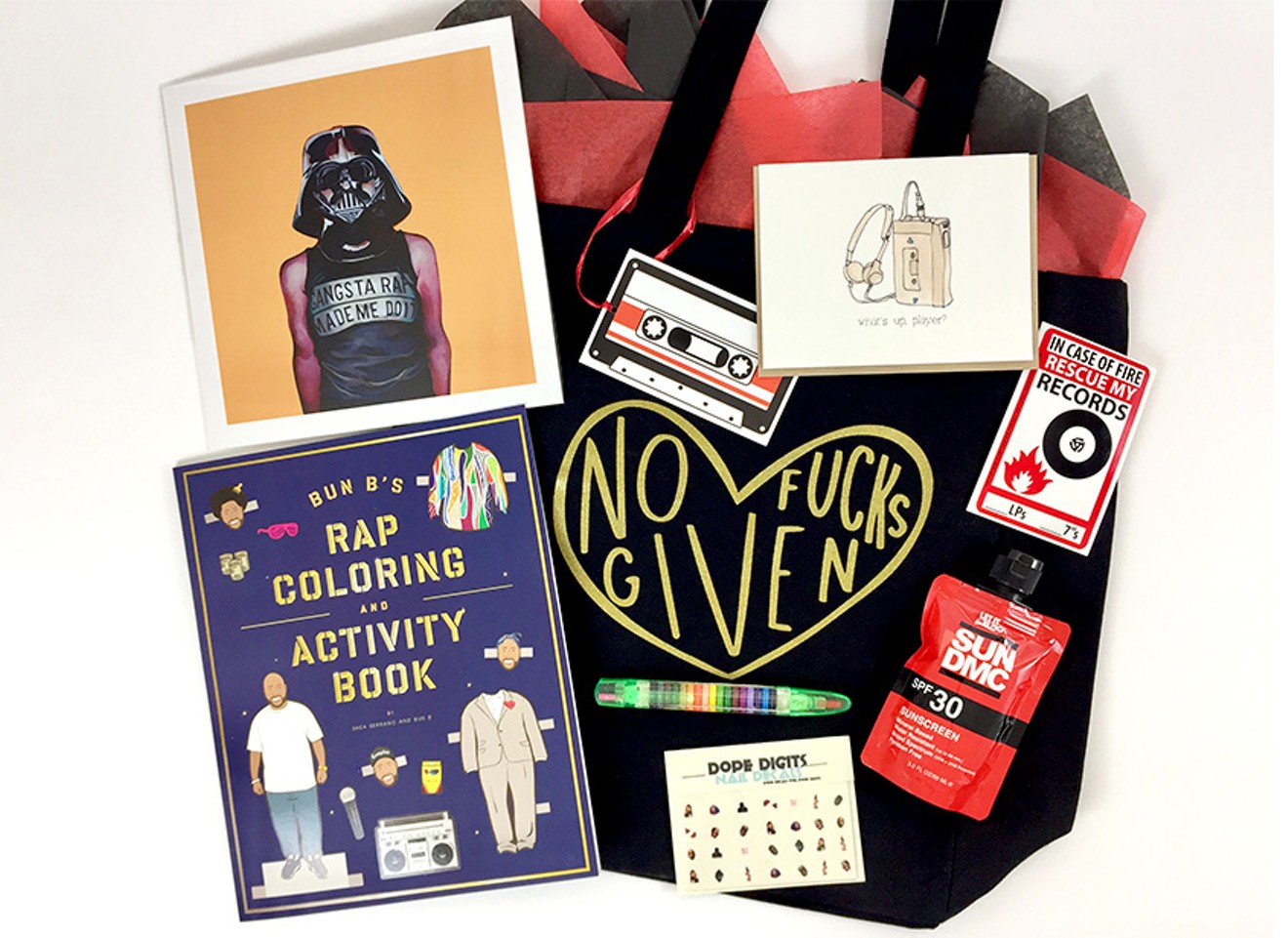 A sample of one of the gift baskets available for purchase at mixedupgifts.com. Cindy Gamel
In 2015, Cindy Gamel launched mixedupgifts.com, an e-commerce site selling gift baskets inspired by songs and bands. Gamel, a web developer by trade, had found herself struggling to find gifts for people; after a lot of money spent on flowers and edible arrangements, she decided to incorporate her love of music into a gift-giving outlet.

With Mixed Up Gifts, shoppers can select a curated gift basket for whatever occasion, be it a birthday or housewarming, with an option to simply build their own. Each basket includes quirky items related to a theme. For example, the “I Ran (So Far Away)” basket inspired by the Flock of Seagulls song contains travel-themed items, like a mini-journal and a travel comb.

Now Gamel is bringing her website to a physical storefront at 70 South Broadway, with a grand opening on Saturday, September 30. Here she hopes to continue expanding her inventory and incorporating art into the mix. We caught up with Gamel to discuss her vision for the storefront, her background in art and how growing up in the ’80s provided inspiration for her concept.

Westword: Did you have any personal connection to mixtapes?

Cindy Gamel: I grew up in the ’80s and ’90s, so it was all about mixtapes. I still have the first one someone ever made me, and all the ones since then. It was CDs after that; I still have those. I loved making them. I spent hours and hours just making one and all the artwork for the cover. Now I sell what look like cassette tapes, but they’re actually USB sticks. So you can still make mixes and put photos or videos of your friends on there. It’s not the same magic as it used to be back in the day with a two-deck tape player, but it’s still fun.

What is your vision for a physical space? What will it provide?

I went to art school. Because I’m obsessed with music, a lot of my art – well probably all of my art – has something to do with music. There are a ton of Denver artists doing really cool work with music and pop culture-inspired themes. I already carry some small prints that can be easily mailed through the online shop. For the space in the storefront, I want to have room for original paintings and works as well as more affordable prints for gifts or just to treat yourself. I’ll probably do some First Friday events around that theme but sticking closely with the subjects I like, which is music and movies and pop culture. Gamel will open the storefront for Mixed Up Gifts on South Broadway on September 30.
Cindy Gamel
Did you do anything with art before web developing?

I haven’t, really. As soon as I graduated art school [in 1999], I taught myself how to code web pages and HTML, and I got my first job. Ever since then, I’ve been working for publishing companies and marketing agencies. It has probably been eighteen years of doing that professionally. While it is somewhat creative, working for other people isn’t. That is part of my whole transition, also, to kind of get away from that and get away from the computer. Although I will still have to be at the computer quite a bit, having a shop and being a part of the Denver community and the South Broadway community, especially, is what is driving me right now. I also want to help support local makers and local vendors, people who make pins and patches and fun little gifts.

Do you have visions for the future of [Mixed Up Gifts]?

I have tons of ideas. I try not to get too carried away, because it can be a little overwhelming for people. It is also hard since I’ve only done pop-ups where you have two tables at most. I have so many products that it ends up being really [cluttered] and hard for people to see everything. It will be nice to spread out a little bit and highlight the products that I carry [more effectively]. I did the Denver Punk Rock Flea Market, and people would come over, get really excited and say, “Oh, I like this,” and [I’d say], “Well, there’s five other things over here that you’d like, too” and [they’d reply], “Where? I don’t see it.” I’m excited to have a better way to present everything, and also the art side of it, too.... I would love to sell vintage band T-shirts, but it’s not really a necessity at this point. So I’m going to try and back-burner some things so I can stay focused on transforming my website into a store.

What is your genre of choice?

The Cure is one of my favorite bands, so I gravitate more toward ’80s and new wave, like the Depeche Mode and Siouxsie and the Banshees. I do like a lot of punk stuff, but as a teenager you only had so much money, so I tried to spend it on the things I was already obsessed with. So I feel like I missed out on a lot of bands, and now this gives me an opportunity to go back and experience more of that music I may have missed out on from my teens and twenties.

The Mixed Up Gifts grand opening is at 11 a.m. Saturday, September 30, at 70 South Broadway. Find more information at mixedupgifts.com.